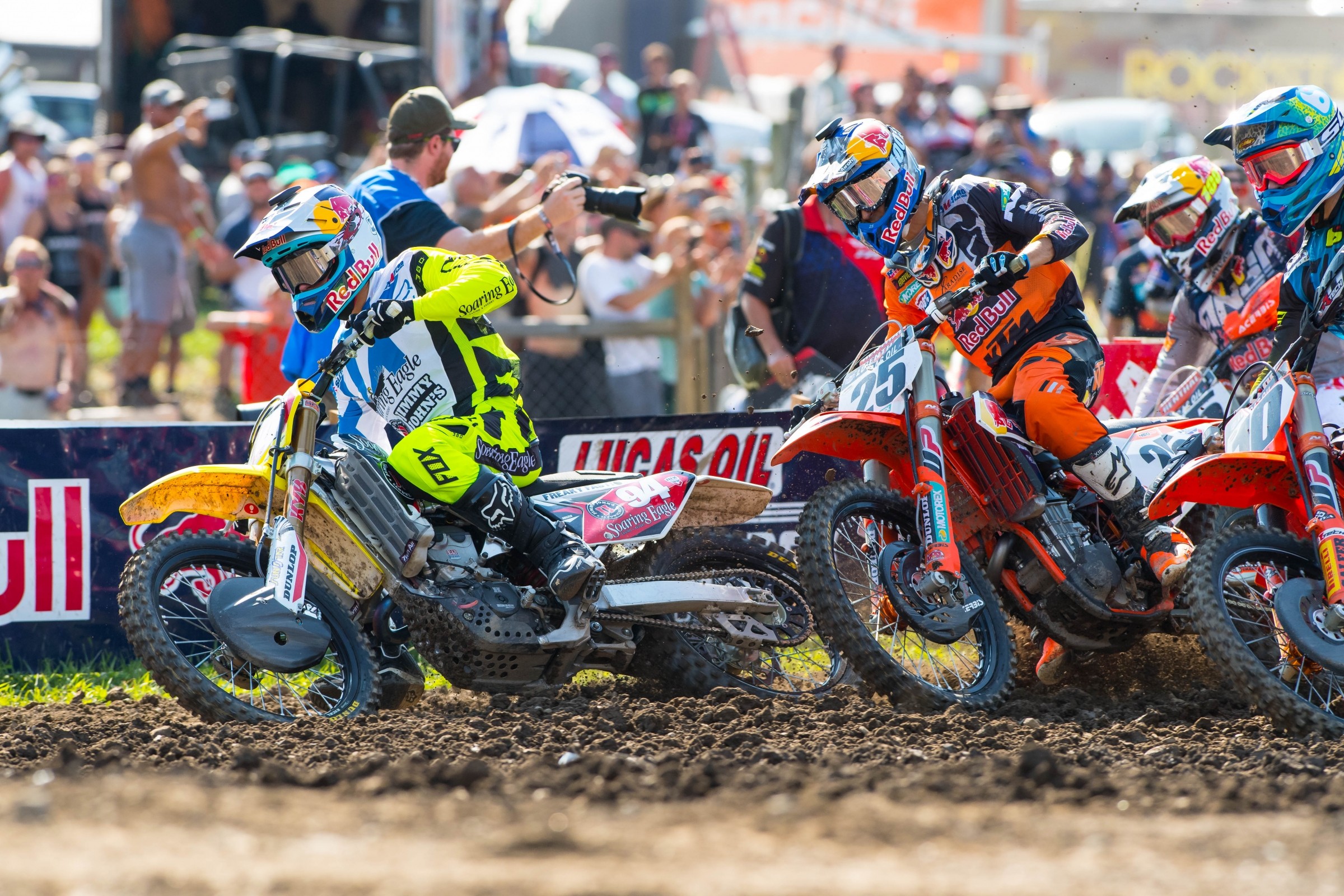 Cooper Webb has picked up buckets of points lately, and as a result has an 81-point lead over Joey Savatgy and Alex Martin, who are tied for second place. And with only four more motos remaining, it’s extremely likely he’s going to wrap up the 2016 Lucas Oil Pro Motocross 250 National Championship at Budds Creek. All he has to do is not lose more than thirty points to Savatgy or Martin, and given the way Webb’s been riding lately, we’re guessing that’s not going to be a problem. Expect Webb to be holding the #1 plate after the dust settles this weekend. –Aaron Hansel

Forget about easing back into the flow for Justin Hill. Since coming back at Washougal, Hill has been fantastic, going 8-4 for fifth overall at Washougal and backing it up with a fourth overall, via 5-4 scores, at Unadilla. That’s outstanding, especially considering Hill hadn’t raced since Round 2 at Glen Helen. If he keeps it up he’ll be on the podium at Budds Creek. –Hansel

And not the good kind, either. Talking about Zach Osborne here, who is in the unenviable position of having suffered mechanical problems in a moto at the last three rounds. At Spring Creek a wheel locked up, his bike expired at Washougal, and at Unadilla he pulled out of the second moto with a reported electrical problem. That’s four scoreless motos in the last six! Fortunately bad luck doesn’t last forever. Look for two strong motos from Osborne at Budds Creek. –Hansel

Third overall as a rookie is superb, right? Right. Getting second in a moto behind Webb, the guy who’s going to wrap up the title this weekend, is stupendous, right? Right. But having a red flag thrown in the first moto while leading is a bummer—especially when you get a terrible jump on the restart and end up stuck in the back. Another gut punch: losing the lead in the second moto just moments before another red flag, one which ended the race. Forkner told us if he had known there was only going to be one lap left in the race, he could have for sure sent it and held Cooper Webb off to maintain the lead. No rider will truly complain about a red flag, because they’re thrown for rider safety, but surely Forkner wishes things had turned out a little differently. We’ll see if he can pull more holeshots at Budds Creek, and if he does, not have to go try to pull another one on a restart. –Hansel

Benny and his Jets

Every day when Austin Forkner motos down at Robbie Reynard’s training complex in Oklahoma, he does it with another rookie, although this one is racing the 450 Class. BTOSports.com KTM’s Benny Bloss has been impressive down the stretch this summer, now moving to sixth in points with the idle fifth-place Christophe Pourcel’s spot in his sights. Benny has cut the gap to 24 points, and he just scored 32 in a superb day at Unadilla. While he’s shooting for fifth in the series, he’s also shooting for a piece of the podium at the races. He ran second for a bit at Unadilla—can finish it off this time? –Jason Weigandt

Did you know Ken Roczen’s worst finish this year is a fourth? And that was due to a fork failure while leading the second moto at Glen Helen. Behind sixteen moto wins (of twenty; he finished second in the other three) Roczen has built his lead to 63 over second place Eli Tomac. With only fifty available points after this weekend, all Roczen needs to do is not lose thirteen points and he’ll clinch a second 450MX championship. All signs point to Roczen having this wrapped up after the first moto on Saturday. –Chase Stallo

Monster Energy/Pro Circuit Kawasaki’s Chris Alldredge will make his 2016 Lucas Oil Pro Motocross debut this weekend after missing the first ten rounds due to a fractured pelvis sustained at the final round of Monster Energy Supercross in May. Alldredge, who finished thirteenth in 250MX in his rookie year in 2015, is in the final year of this contract with the team, so these last two rounds hold a lot of weight. How will he do this weekend? -Stallo

Aaron Plessinger may have had the ride of the weekend at Unadilla. The second year pro was going four seconds a lap faster than the leaders at different points! After a similar ride at High Point, Plessinger went 14-13-10-11 over the next four motos. Can AP back up his first overall podium of the season with another brilliant ride? -Stallo

Alex Martin has picked up seventeen points on Joey Savatgy over the last four motos and now the two will enter the final four motos tied at 341 points. This should be an epic battle to the finish, as they’ve combined for four moto podiums (two each) in the last two rounds. They’ve also had several moto battles this year that went down to the wire, so this deadlock in points is kind of fitting. AMart won his first career moto at Budds Creek in an epic rainstorm last year; how will this year play out? -Stallo

No one forecasted Austin Forkner pressing two-time defending champion Jeremy Martin for fourth in points. Firstly, once Cooper Webb broke his wrist, most expected for Martin to cruise to a third straight title. Illness and injuries thwarted those chances. And while Forkner was expected to do big things, the consistency he’s displayed is well beyond his years. With Martin out for the final two rounds (he missed Unadilla as well) Forkner needs just twenty-nine points over the last four motos to clinch fourth in points. -Stallo