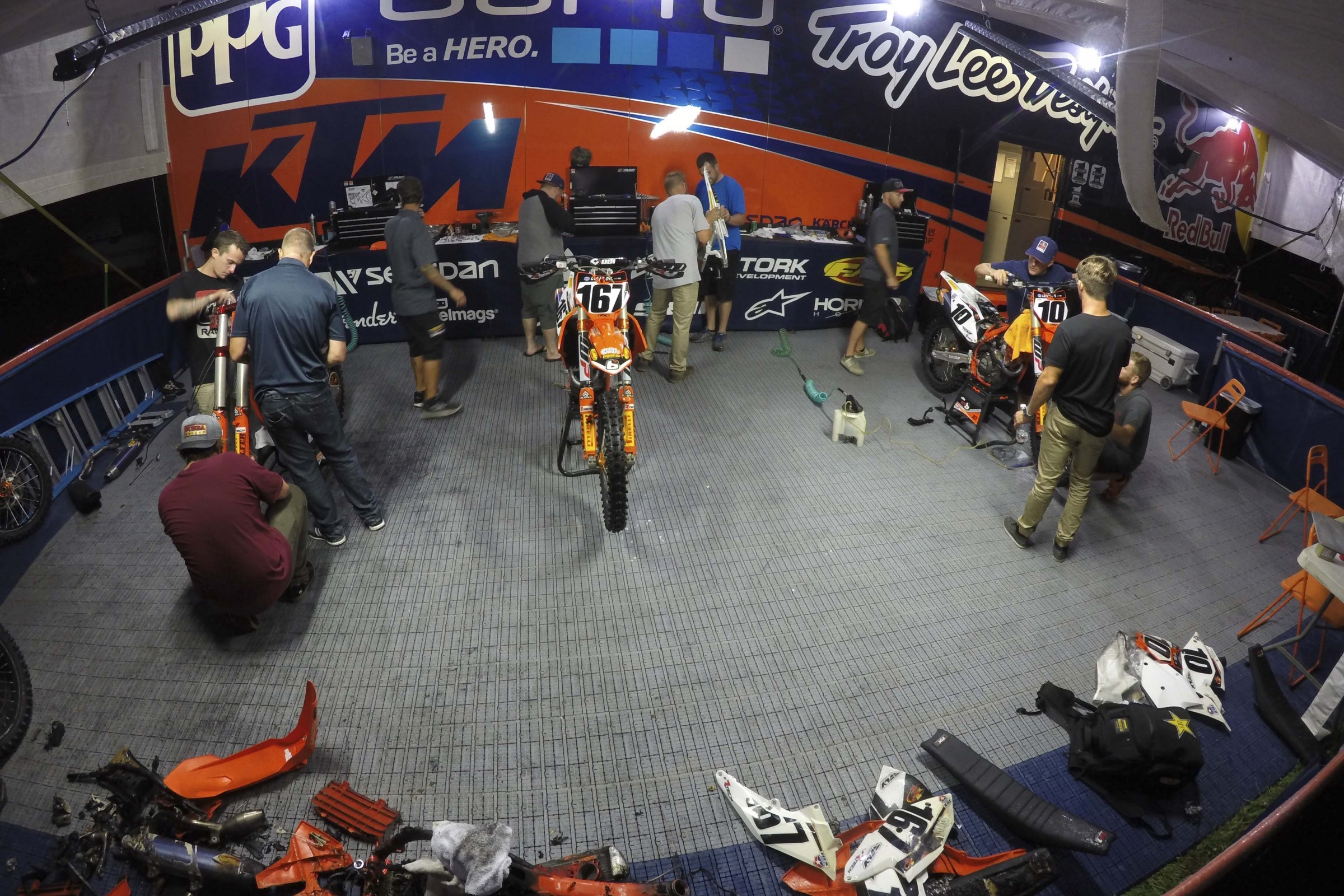 Phones started ringing just after 8 p.m. local. One after another. The Raddison hotel in downtown Utica, New York, is where a lot of the industry folks stay for the Unadilla National—it’s also where the phone calls started that night. Word was getting out: there was a fire at the BTOSports.com-WPS-KTM rig.

Luckily, the rig had been locked up for the night and the crew had left the track, so no one was hurt. But fire can mean a lot of things, from small flames inside a trailer that do little damage (which is what the Rockstar Energy Husqvarna team dealt with at Washougal) to full on flames that burn things to the ground. Plus, the mind starts to wander into thoughts of race gas and explosions, or other rigs catching on fire. The security staff at the track soon had the fire department en route, containing everything before the worst could happen.

As the news was flooding in, I saw BTOSports.com-WPS-KTM rider Benny Bloss on the other side of the Raddison restaurant, along with his parents. Benny isn’t a fire fighter and the track was 40 minutes away, so there wasn’t much he could do besides absorb the news.

Benny is on a roll and getting faster every week. He said he had done the math on his potential national number for 2017, as well as how many points he will need to score to take fifth in the series away from the idle Christophe Pourcel. His parents even referenced our online poll from last week asking that very question!

Yeah, Benny was pumped on the weekend, but the fire was casting a pretty big shadow. First we heard there were no visible flames, which sounded great, but it turned out that was only because the fire was inside the trailer. The fire was eventually extinguished, but bikes need to be pulled out to assess damage. By then, MX Sports’ Carrie Coombs had grabbed my phone to call team rider Andrew Short and give him an update. Soon, Short and the third team rider, Justin Brayton, came back downstairs into the restaurant. The three riders were in different stages of emotion. Bloss and his parents were completely blown out, emotionally distraught over the thought of not racing. Brayton was silent, seemingly unable to even process this bizarre scenario. Short? He’s three races from retirement. You literally cannot bum him out right now. Short said he would be okay with not racing but also okay with racing. He is okay with everything. Andrew Short just has a permanent smile right now!

Then the bikes came out and the assessment began. Short’s bike was basically toast. Everyone assumed Brayton and Bloss’ bikes would be the same. Shorty still smiled, Brayton and Bloss were at a loss. But as photos leaked of the #10 and #167 bikes, they didn’t look so bad. Plus, KTM has a lot of other resources at the track via the Red Bull KTM factory team and the Troy Lee Designs KTM team. The TLD squad was already headed back to the track, because its rig was parked right next to BTO, leading to fears that it would get caught in the fire.

Not long after, Brayton’s mechanic was seen heading back up the hotel elevator. He and the rest of the wrenches would get their stuff and head back to the track and try to rebuild. The TLD, Red Bull KTM and Rockstar Energy Husqvarna teams would pitch in, too. One way or another, they were going to race.

We sent our man Kyle Scott back to the track to document the story. He stayed through the night, watching the KTM squads work as one to get the BTO bikes ready for Saturday. We’ll let the photos do the talking from here, as well as a result: a career-best fourth for Bloss, who preserved his shot at fifth in the final season standings. A long night, but a good day for folks on that team.