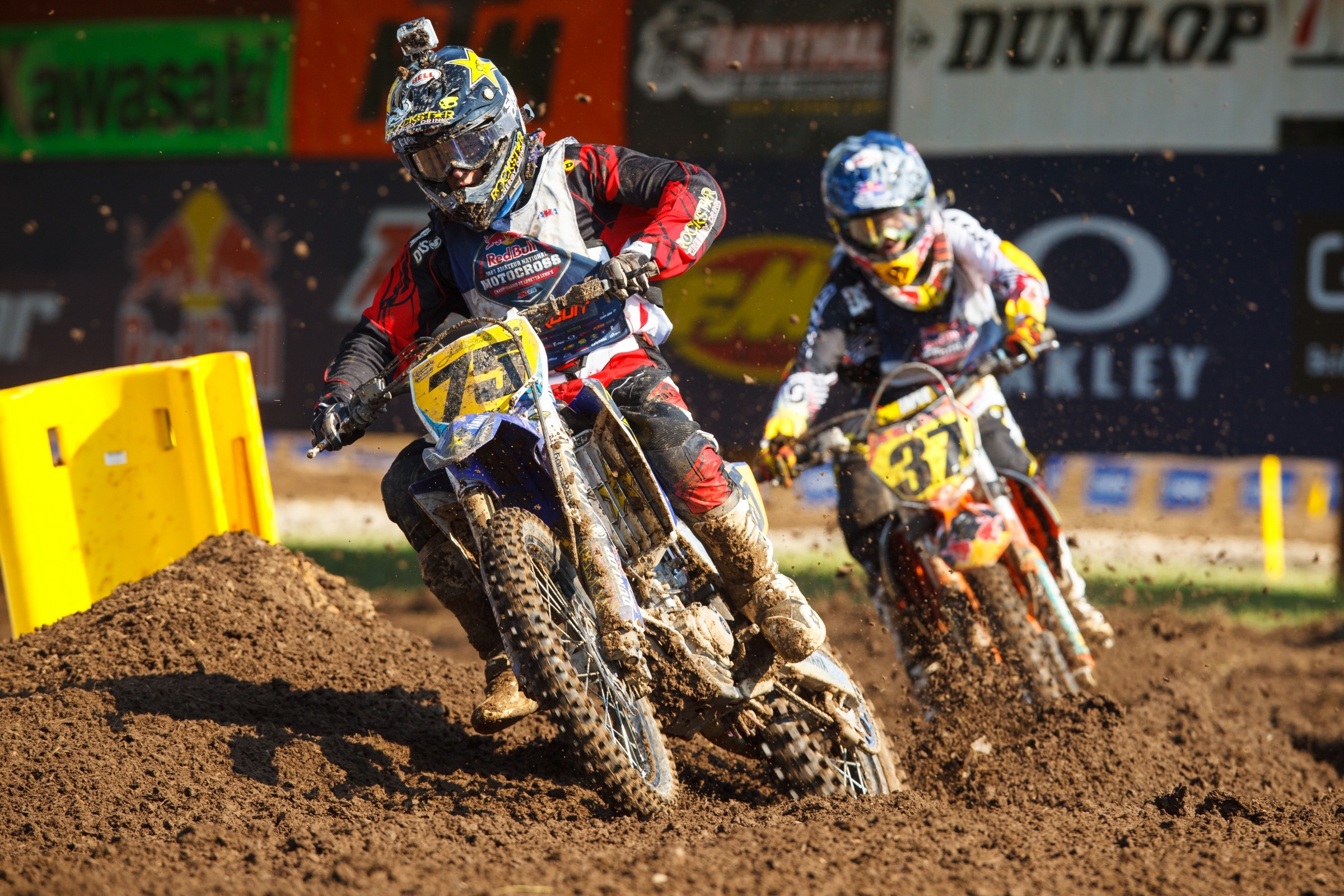 Redux Gold and the Rush

Two things are happening in the motocross world at the same time. Teams are signing amateur riders to better deals at earlier ages than ever. Yet, on the pro side, more riders that didn’t have great amateur careers are breaking through and finding success.

You can start at the top with Ryan Dungey. Mix in Jeremy Martin, and now his brother Alex, who has become an all-time blue-collar/late-bloomer type. Dungey, the Martin brothers and heck, even Ryan Villopoto, combined for a total of two AMA Amateur National Championships at Loretta Lynn’s. Sure, these dudes were fast down there—Dungey and J-Mart had Suzuki support, Villopoto was a top Team Green prospect—but no one would have predicted the heights that were on the horizon.

You want to go deeper? As an amateur, most people had never heard of Cole Seely. Or Justin Brayton. Or Weston Peick. And while a lot of people had heard of Malcolm Stewart, it was only because he was James’ brother, AKA “Poor Malcolm never even got himself a title at Loretta’s.” I seriously doubt anyone was banking on Mookie eventually nailing a 250SX Championship, and that includes Mookie himself, who always maintained that he was more of a fisherman than a racer.

It didn’t use to be this way. The stars of the sport were easy to track via their Loretta’s success. Damon Bradshaw and Jeff Emig were fast amateurs and fast professionals. Tim Ferry left Loretta’s with the record for titles and had a great pro career. His record was eventually broken by Kevin Windham (great pro career), Ricky Carmichael (great pro career) and James Stewart (great pro career). Something flipped by the time Mike Alessi came around to tie James’ title mark, though. Instead of Mike going on and winning like Windham, Carmichael and Stewart, Villopoto flipped the script and leapfrogged him. So did Dungey. Now it’s all sorts of mixed up, as the next racer to tie Stewart and Alessi’s eleven Loretta’s titles, Adam Cianciarulo, has certainly found his pro career hitting the stalls, too.

Oh sure, some riders maintain greatness. Eli Tomac was never a slouch at any level and is still a bad dude right now. Cooper Webb was always fast and continues to be so—maybe he’s achieved at a slightly higher-than-predicted level as a pro, but he certainly didn’t come out of nowhere. The Peick/Seely/Brayton/Mookie type stories remain rare—but they used to be non-existent.

Meanwhile, the race to get ‘em younger continues. All the teams are aware of the dangers, because it gets harder to predict accurately the younger you go. Once you’re reaching into the minicycle ranks with guaranteed pro deals, or taking a legitimate look at riders in the 50cc classes, you increase the level of difficulty. There are just so many variables at that point, and not just the “are his parents crazy?” stuff you hear about. As pros, the playing field gets pretty level. All factory pros ride and train full time. But kids, well, some are riding and training 12 months a year, and some are stuck up in the Minnesota winter dying to ride (Dungey and the Martins). That leads to massive discrepancies, making it harder to know what you’re going to get. Teams have to go for it, though. If they don’t, another team will.

(By the way, if teams don’t take flyers on kids, they’ll take them on someone else. Read the story Matthes and I put together on foreign riders coming to the U.S., specifically what we saw in the early Y2K era. Back then, there was a gold rush on French supercross specialists, but a lot of those riders didn’t pan out. Now we’re onto the kids, and while a few turned out to be busts, it has turned out to be easier to predict success from the American amateur ranks than the French SX Championships.)

Look, it might seem crazy to be fighting over 14 year olds, but Cooper Webb shows how nailing one pick right can completely change the sport. Webb was once a Honda and KTM prospect, but ultimately Yamaha and Bobby Reagan’s Star Racing outfit got him. The result? Two 250SX titles, a possible 250 National Motocross title, and now Yamaha’s revitalized factory 450 effort has the most coveted rider of this generation. Back when Cooper moved to the bLU cRU, Star Racing commanded little respect, and Team Yamaha was no longer operating a traditional factory 450 team. Star and Yamaha also grabbed Jeremy Martin (who was a Suzuki prospect, but then Suzuki’s amateur operation took a huge hit) and between he and Webb, the entire power structure of the 250 class has changed, as Martin has won two 250MX titles while with Star Racing to go along with Webb’s accolades.

Now Cooper is signed for Team Yamaha on a 450. At one point, Honda had him! KTM had him! Just think of how different GEICO and HRC Honda’s efforts would look right now if Webb was riding and staying on the red bikes. Think of what the TLD KTM team would look like if Cooper was riding over there. Instead, if Webb does as well as expected on a 450, he will have completely changed the fortunes for the entire Yamaha brand.

That’s what’s on the line when teams fight for these kids. Think of the rewards Dungey reaped for Suzuki and Roger DeCoster (who led him to KTM). Think of what Villopoto did for Kawasaki. Then there’s the ultimate compliment: Ken Roczen was raised by Suzuki, so even after experiencing success on KTMs, he made the decision to return to RM-Zs. Now he’ll probably reward Suzuki with a 450 National Motocross Championship.

When Villopoto retired, Kawasaki found the cupboard was bare. Team Green and Pro Circuit were once the only, or best, game in town, but other teams had started to beat them to the amateur punch. Austin Forkner was an obvious talent and already under the Team Green umbrella, and Garrett Marchbanks is considered Kawasaki’s next stud. But these other amateur machines—GEICO Honda, Yamalube/Star Racing Yamaha and others—knew it, and they were circling.

Last year at Loretta’s, we heard lots of talk about big money, long-term deals for amateur talent. Kawasaki had worked hard to retain Forkner. Marchbanks, on the verge of the AMA Youth Rider of the Year Award (best minicycle pilot of the week), was surrounded by rumors, and later GEICO Honda got Chase Sexton, now the newest Horizon Award Winner, away from Yamaha. Earlier this year, Monster Energy Kawasaki racing boss Bruce Stjenstrom told me that while the team was lucky and fortunate to land Tomac, holding onto Forkner and Marchbanks was priority number one, at any cost. It’s obvious why: fortunate timing saw Forkner win his first professional moto in the race right before Loretta’s this year. That reverberated throughout the week at the Ranch—Forkner was just here last year and how he’s winning races as a pro!

So for every Seely, Peick, Malcolm and more, teams still have to place big bets on the prodigies, lest they miss the next Ryan Villopoto or Cooper Webb. Then comes the complicated mix of who is ready, who had too much too soon, who will get burned out, and who is a diamond in the rough, just waiting for a chance. The teams are drilling deeper for the next gem—but the further you drill, the harder it is to know what you’ll find.