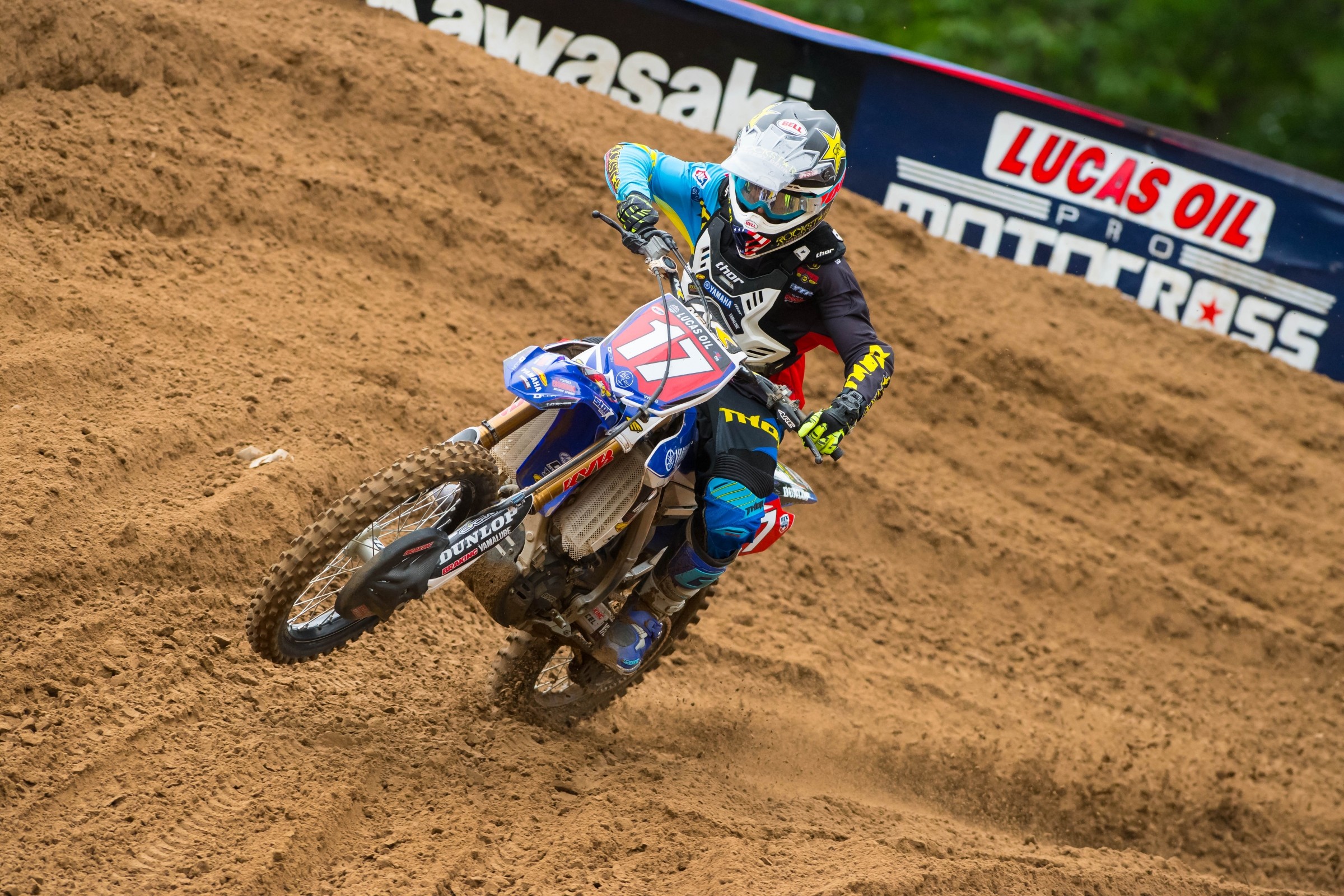 Yamaha usually hosts a dinner for its bLU cRU riders on Thursday night at Loretta’s, but it added a special twist this year by using the dinner to announce its 2017 factory supercross and motocross team, which will consist of the returning Chad Reed, and 250 graduate Cooper Webb. This is a team that won’t be short on personality, and probably not on results, either.

Chad and Cooper got to talk to the bLU cRU riders on stage on Thursday night. Here’s what they had to say.

Racer X: Chad, this is one of the things you were very adamant about. You wanted to end your career with Yamaha. You don’t have to do this anymore, but you still want to.
Chad Reed: Yeah it’s been great to come home. When I came back to Yamaha last year the same people that were there when I was winning for them where still there, and I was able to take some of the people with me from TwoTwo Motorsports over there with me. So it’s been fun. But this year was a big task. We were able to take in a lot of data and I think we can work on our weaknesses throughout the off season and see what we can do next year.

Last year you and this team had a very late start. Has to feel a lot better to have the deal locked in in August.
Yeah, I’ve been on vacation for two months. I had been taking on a lot, trying to run TwoTwo Motorsports, and having a wife and three kids. I was pretty slammed. And then last year, it was really only the Thursday before Anaheim 1 when I signed my contract. So it was pretty stressful! We don’t like going to the last minute, but we got it done and we had some success, got a few podiums early in the year. But then as the year went on we also had some races that we weren’t really too stoked with. So it was good to get away for a bit. I went to Europe, I went to Australia, but now I’m happy to get back to work.

So we’re here at Loretta Lynn’s. As a kid in Australia, was this an event you knew about? Was it on your radar?
Yeah, I definitely knew about it and I remember always asking my mom and dad about it. I wanted to go to America and I wanted to ride—here you call it amateur but in Australia we call it junior—and I would tell my mom and dad I wanted to come ride America’s junior championship. But I just never had the opportunity to do it, especially with the qualifying system and all of that. But I have a cousin, Craig Anderson, who is five years older than me, and he was lucky enough to come and race here, and also Ponca City back when that was around. So yeah, definitely knew about it and wanted to do it but I never got to. Maybe when I’m done with my pro career I’ll come back and try a Vet class. But I’ll tell you, the weather here this week, with all this rain, not sure that’s inspiring me to want to come and try it! But I think, yeah, one day I’d like to come back and race it so I could say I’ve done it.

That’s the thing with you. You’ve seen the highs and lows of this sport but you still love it as much as anyone.
Yeah, it’s a lifestyle. Right now it’s just me and Andrew Short left that are racing at our age, and Shorty has announced this will be his last season. So that means I’m the oldest guy in the class next year! So I’m the old guy, but I embrace it and I still enjoy it. I’ve been flying on planes to go to races since I was 11 years old. This is what I like to do and I still have the desire to work hard. And I still feel when I wake up every morning that I can still win races and get podiums and be competitive. As long as I believe that I want to give it a shot. So I’m thankful to Keith McCarty and everyone at Yamaha for putting this together and getting the factory race team up and running. I try to play as big of a role as I possibly could; I brought some of my TwoTwo Motorsports guys over, we had a lot of fun and we worked hard to get it going. For me, it’s a lifestyle. It’s hanging out with the grassroots—I’ve got my friend Michael Byrne racing here this week. It’s hanging out late in the team meetings trying to make things better.

I don’t know if anyone likes racing, in general, as much as you. You’re like a racing junkie.
[Laughs] You know, I’m a huge Valentino Rossi fan, and I’m fortunate enough to be friends with him. I can see why he, at 37 years old, can still be as competitive as he is, still win races, still can lead the points. It’s having young people around you, and good people around you. So we’re down in Florida doing our thing and putting in the work. That’s what we do. We’re just two dudes who love racing our motorcycles and we’re happy to still do it.

Racer X: Well, we’ve heard a lot about this but now we know it’s official. You’re moving up to the 450s with Team Yamaha.
Cooper Webb: Yeah, it’s going to be good. I’m really excited about getting to work with this guy [Reed] right here. It’s really like a dream come true.

The cool thing is, we’ve had a few previews of what you can do on a 450.
Yeah, I raced a few off-season races overseas, and the USGP and the Motocross of Nations and everything has gone really well. I really like the bike a lot, so hopefully with some testing and tuning we can make it even better.

Let’s talk about your time here at Loretta’s. You won a title here on a Yamaha all the way back in the PW50 division, then more titles on bigger bikes, all the way through to the B class. So, did you get to have fun here and enjoy it or were you always super serious when you were here as a racer?
Oh I always had fun here, hanging out with my friends or going down to the creek or whatever. Yeah, it was serious but it was fun at the same time, and it was a good time with my family, too. I usually did pretty good here so that was always nice, but even after the bad races you would just kind of say, “Oh well, we’ll get them the next time.”

Now that everyone has gotten to know you as a pro, we see you’re a pretty fiery competitor. Were you always like that even when you were racing as an amateur?
Uh, I was always pretty competitive, but I didn’t take it too serious until later on. When I was a kid I thought it was just fun, and that’s what I did. I didn’t start to take it too serious until later, but the way things worked out I’m glad I did.

One of the interesting things about you is, you stayed in regular public school a lot later than other riders, you weren’t just moto-ing down at a training facility at age seven. And you still made it work.
Yeah, I went to school up until my junior year of high school, that was nice. Like I said, I always did this for fun, and never took it as seriously as, well, maybe I should have! [Laughs] Now it’s what I do for a career and I can’t complain at all.

Let’s talk about your season. Supercross was going well but you probably had a little more drama than you wanted there at the end. No title drama here in motocross, though, sitting on a 51-point lead.
Supercross went awesome besides those two weeks before Las Vegas, when I hurt my wrist. It wasn’t looking good but we were able to make it happen. Then outdoors, it’s gone good. I knew the season would start a little slow with the wrist injury, but we were able to get things going. Now we’ve got this little break to come and see all these guys here at Loretta’s, so that’s good.

Have you come back here before since you were done racing?
Yeah, I came back here in 2014.

Is it weird, coming here and not racing?
It’s actually pretty fun, you get to just watch and try to see who the guys are going to be in the next generation.

So now you get to work with Chad Reed. What’s that going to be like?
That’s going to be pretty awesome. He’s a guy I always looked up to and tried to follow, even with my riding style and stuff. So it’s a dream come true to be able to call him my teammate. We’ve got the rookie and the vet, so that should make for a pretty good team.