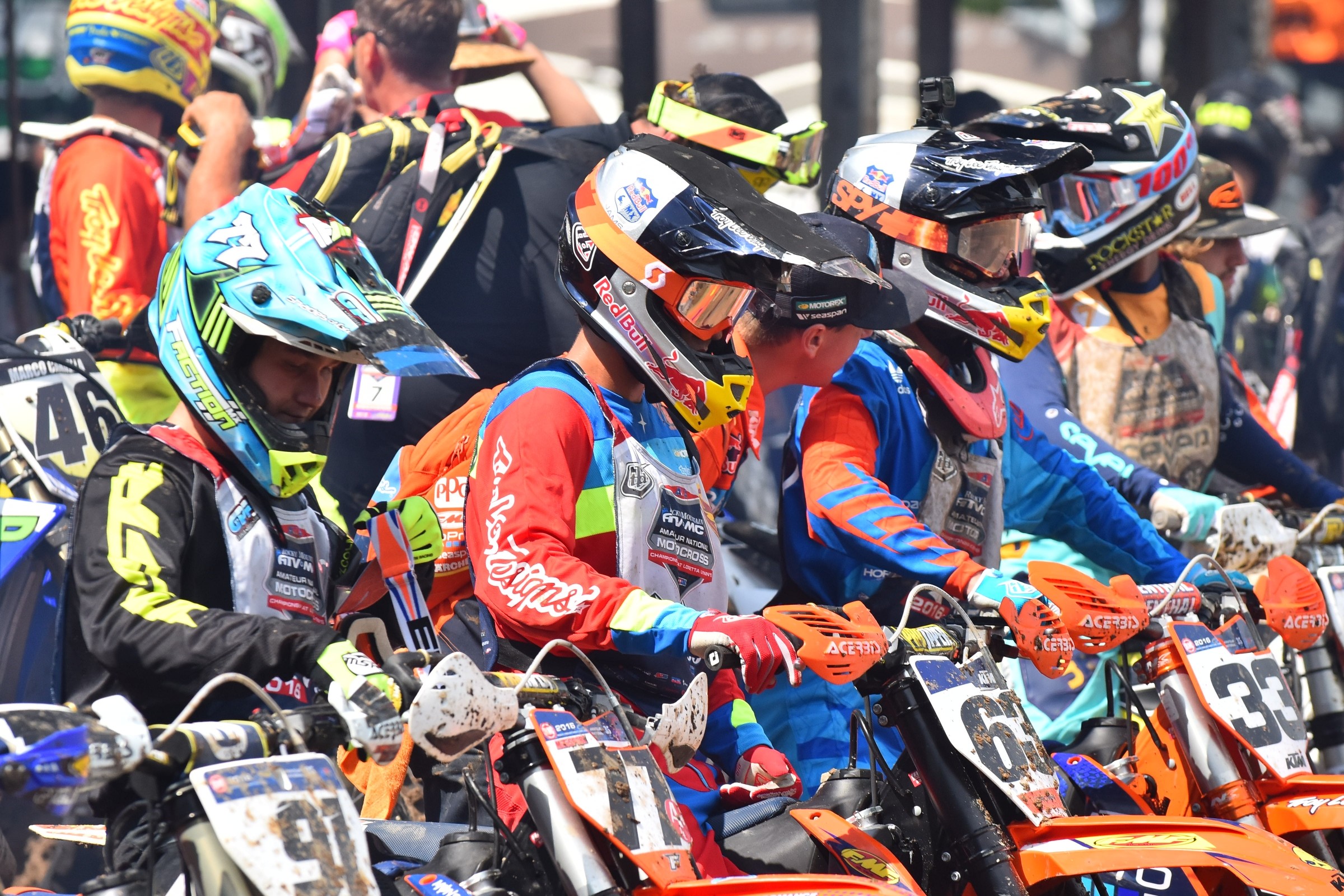 Put a rainbow over the 35th Annual Rocky Mountain ATV/MC AMA Amateur National Motocross Championship, presented by AMSOIL, at Loretta Lynn Ranch, as Thursday began with rain and ended with sunshine. That means the track started muddy but ended up rough, with the usual drama mixed into each classes’ results. You can follow results here or watch on RacerTV.com, but if you want our perspective on day three, read on.

With second motos complete, we have a few 1-2 versus 2-1 ties heading into third moto showdowns. Hunter Yoder started a muddy 65cc moto out front and pulled a (wait for it) 15 second lead on the first lap. Then he crashed two turns later. Ryder Difrancesco took over from there and rode a flawless race through the mud to notch the win, while Yoder made some passes to salvage second. That’s a 2-1, 1-2 tie for those two after the first two motos.

You just know the 125s will provide great racing. In the 125 B/C class, Jalek Swoll won the first moto and in moto two he and Derek Drake put on a big battle for the lead. Then Swoll bobbled which let Drake get away. Drake holds a 2-1 while Swoll has a 1-2 heading into moto three.

The closest one-on-one battles of the week? It’s between female competitors Jordan Jarvis and Jazzmyn Canfield, who have battled every moto so far this week in the Women’s (14+) and the Girls Sr. (12-16) class. On Thursday morning, Jarvis had the lead in hand until a last-lap crash which put Canfield out front for the moto win. They squared off again late in the day, with Canfield pulling out another win. Their moto scores in the two classes? Of course 1-2, 2-1, and 1-2, 2-1, leaving them tied for the lead in both of their classes going into in the third motos!

We’ve mentioned before that Yamaha’s Bradley Taft and Honda’s Chase Sexton are the favorites for the coveted AMA Horizon Award. In 250 A, Sexton needs some help to dig out the title after a big crash in the first moto left him in fifth while Taft got the moto win. In moto two, Taft got out to the early lead, but Sexton was able to track him down for the win, which was big. Meanwhile, upstart Cameron McAdoo gave them a run, staying close to Taft for most of the race before the pain in his injured ribs and shoulder finally slowed him late in the race. McAdoo held on for third though to remain the dark horse, while Taft is still the overall leader with a 1-2.

You’ll always see some here. KTM’s Max Markolf didn’t make the race last year and was looking for redemption in the B class this time. He scored second in both of his first motos, but the mud ruined his bike in a second moto. In his next moto, he grabbed the Bell Helmets Holeshot Award but another rider ran into him in the second turn, which left him down on the ground and in last. Markolf charged up to about 16th halfway through the race until his bike let go again. So that’s a pair of 2-DNF, 2-DNF scores for him.

There has been no such bad luck, yet, for fellow KTM man Mitchell Falk, who has gone 1-1 in 250 B stock. Team Green’s Jordan Bailey is putting together a great week, with a 1-2 in 250 B. His teammate Garrett Marchbanks won the second moto but finished 21st in moto one, so Bailey is in good shape for the title.

The racing is only part of the fun at Loretta’s. Since everyone is trapped at the ranch for the week, there are plenty of extra activities planned for the restless natives. Yamaha held a dinner for its bLU cRU riders and then brought out Aaron Plessinger, Chad Reed and Cooper Webb for interviews and autographs. Yamaha used the occasion to officially announce its 2017 factory 450 team of Webb and Reed, which was rumored but is now signed and official. When that event was complete, the Amsoil Arena transformed into a dance hall, with the 2016 MX Prom and Silent Disco. Good times for the kids!

Meanwhile, way back on the other side of the ranch, Moto Playground ran its Sidewinder race. They carved a series of turns into the sandy ground and let folks rip through them on Yamaha TT-R125s and TT-R90s, all racing on the stopwatch. Good times—and more to come today, on Friday.