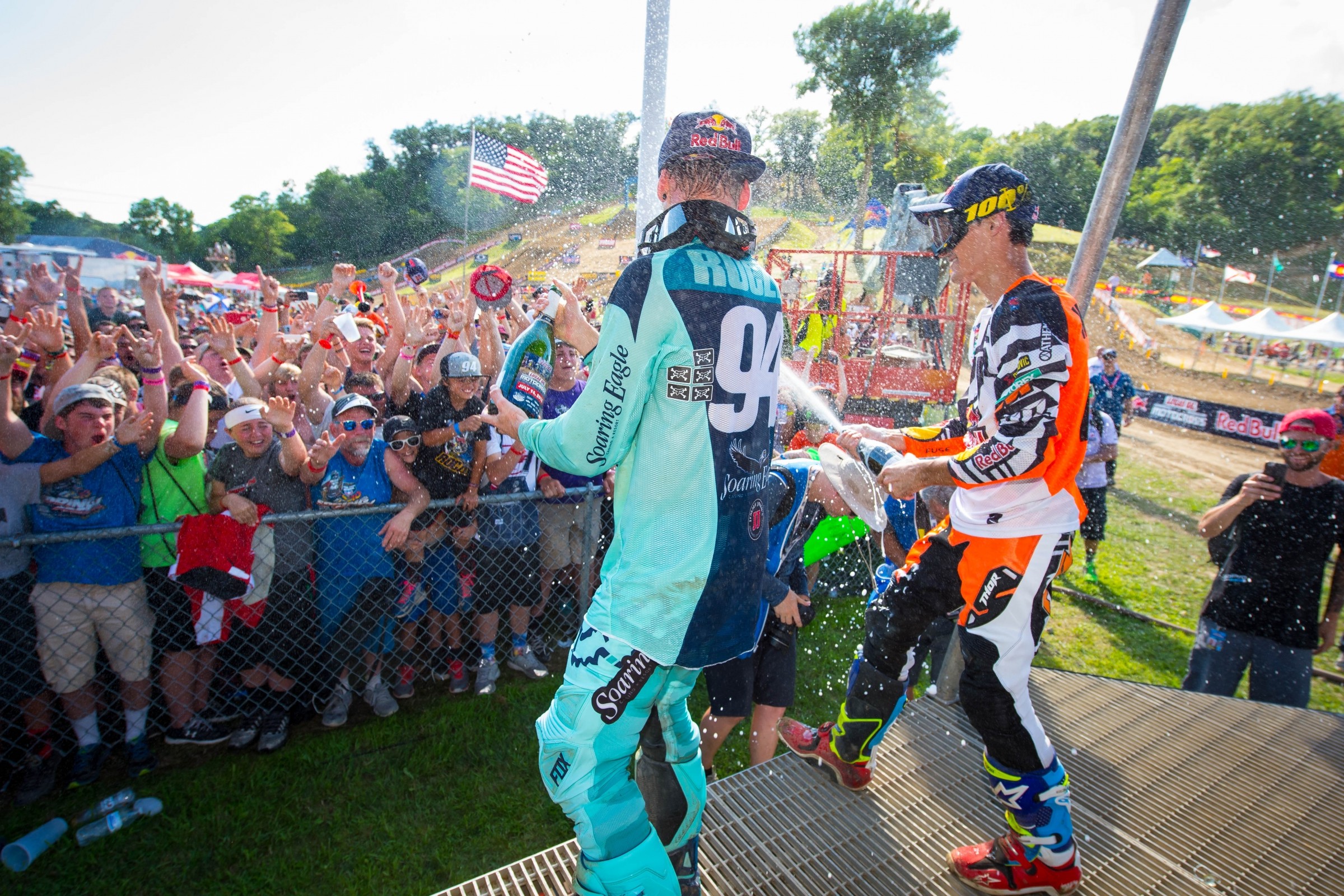 Soaring Eagle/Jimmy John’s/RCH Suzuki’s Ken Roczen has pretty much dominated the 2016 Lucas Oil Pro Motocross Championship, and yet, Saturday’s race at Spring Creek in Minnesota might have been his best ride yet. He was fastest in qualifying for the first time all year (surprisingly) and then carried that speed into the motos, where he passed rival Eli Tomac each time to re-establish himself at the top of the heap. His second moto was especially impressive, as you’ll read below. Here’s what Ken had to say in the post-race press conference.

Racer X: Give us the brief version of how it went for you. It looked like starting off with qualifying that it was all yours, but the starts made it tougher on you. Tell us about the day.
Ken Roczen: Well, only my second one [wasn’t so good]. My first one was pretty good. I went second into the turn, or third. Eli [Tomac] was really good too. First off I haven’t had a pole [in qualifying] in probably three years, so that kind of felt good. The first moto was good. I got a little bit unlucky I think with the red cross flag back there so I had to roll everything, and then they got quite a bit closer. But I was able to pull it off. In the second one I came off crooked a little bit and pulled to the right and almost went down on the start straight. I came together with Trey [Canard]. From then on I was really far back. And then actually in that little double right down there I almost went over the bars. I think I dabbed my foot on the ground and bent my shifter back. From then on it was a little bit of a struggle because my shifter was really close to the foot peg. It was really hard [when I was] jumping because it was bent up and closer to my foot peg, so I would always hit neutral and miss-shift a lot. I tried to just kind of stay in third gear sometimes but it was too low RPM and I had to stay in second. It was a bit of a struggle there. I had to be really careful when I jumped to not hit neutral. But we came up to the front and put a gap between us and just rode a smart race. I had to be really careful. I didn’t want the bike to blow up, either.

Your qualifying time was really fast—almost two seconds over anyone else. Did you realize that in moto one your fastest lap of the race was actually quicker than your qualifying time?
No, I don’t know. I didn’t even look at any of the results.

Okay, but you’re also saying you weren’t feeling good on the first lap of the moto when your shifter was bent—but you passed like nine guys! So you couldn’t have been struggling that much. That was unreal!
I know. I’m a racer so my mind is just getting to the front. At first I didn’t know what was going on. I miss-shifted. I almost went over the bars twice. I’m like, “What the hell?” And then I looked down and the thing didn’t look right, so from then on I just kind of pulled by head out of my ass and kept it in third and just went wherever the other guys didn’t go to try to make passes. I don’t really like being in the mid-field. It’s too sketchy.

So were you in third most of the way or could you shift a little bit here and there?
I was shifting, but I would have to throttle back and then I had to click it in and then go again. Especially coming out of the turn in-between the rollers, the rollers section going one way and turning in back there, I sometimes couldn’t shift and it would cost me so much time because I’d be in second gear the whole way. It was tough. I had to adjust it a little bit because I didn’t want to hit neutral in the air. It was more so that when I jump then you kind of move your feet a little bit and you land. The shifter was just bent so far back that I didn’t have a gap in-between basically my toes and the shifter…and the shifter was bent up. So every time I would land I just would kind of hit it. Sometimes it didn’t make too many good noises so I was a little freaked out, but luckily it lasted. That was pretty much the reason why I tried to shift clean too because I didn’t want the bike to blow up. Obviously I hit neutral a few times and it didn’t sound very good. I kind of just played it safe there.

Watching that second moto start, how sketchy was that? Were you close to going down there or not? Your legs were flying, it looked like a lot of contact.
Oscar [mechanic] said it was pretty gnarly. I just ride or whatever. I don’t really remember. I got out of the gate really good but the ruts coming out of there were pretty long and kind of just went off to the right. I went off to the right a lot, it wasn’t just a little bit. So I kind of felt bad, because I didn’t want to take anybody down or be that kind of guy. But it was obviously not on purpose. Luckily nobody went down.

You said you did make some bike changes this week. What are you working on now?
I have a complete different fork, pretty much. I don’t know what the internal changes were or whatever. I was kind of messing around with it a little bit and I think it was working pretty good now.

It looked like you liked it.
In the first moto I didn’t. For me there’s a fine line where it feels good. We’re trying to figure out why they’re so inconsistent because towards the end of the moto my front end gets a little bit worse. But in the second moto it seemed like we adjusted well and we were fine.

Two-two last weekend, now this weekend you’re kind of back to your old self, putting together another 1-1. Did you change anything up during the week? Did you take some time off, kind of recuperate?
No, not at all. I actually had a little bit of a harder week for me. I changed my forks. I think if I would have had these forks that I have right now last week, I think it would have been a lot better for me. But I’m happy we’re working on fixing things but at the same time try to not go too crazy.

Muddy Creek was close and then you bounced back big and RedBud was really good, and then last week you got second and you bounced back here. Is that something that runs into your mind? I don’t want to give anybody extra momentum—that you’ve got to try to get it back if you don’t have a great weekend?
I’m just racing my best out there. I don’t want to settle for anything less than a win no matter how big the gap is. Everybody has their off days. Obviously Eli was on it last weekend, no doubt about it, but in the first moto [at Southwick] that’s something where…it would seem weird to go from winning [at RedBud] to backing down that much, but just something didn’t feel right. So we figured something out and I’m just back to my normal self. I never asked for a perfect bike but just something where I could ride the bike and the bike’s not riding me. I think everybody has their bad days or whatever, or their off motos. That’s all.