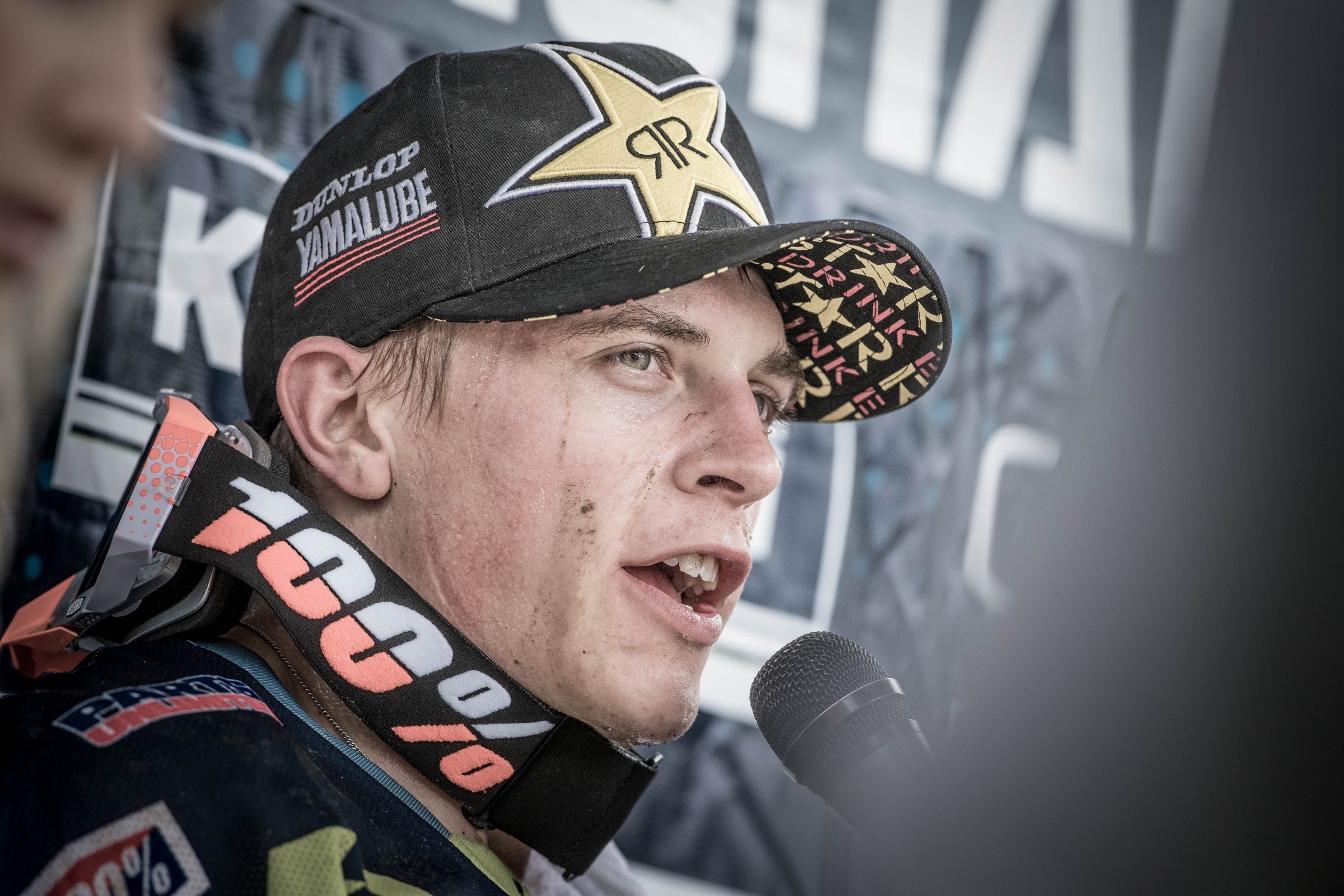 It’s surprising that it took Jeremy Martin, the two-time and defending 250MX National Champion, eight races to finally notch an overall win in 2016. And even his first victory, at his home track at Spring Creek in Millville, Minnesota, wasn’t easy, as Cooper Webb passed him en route to the first moto win.

Moto two was a bigger breakthrough that you’d know. For the first time this year, J-Mart says he finally felt comfortable with his front forks. He not only won, but he was never really threatened as Webb got a bad start. Is this a sign of a late-season run? Jeremy talked about it in the post-race press conference.

Racer X: Congrats on your first win of the year, you’ve now moved into second in the standings, but still down 38 points. Why don’t you take us through your day?
Jeremy Martin: Today was good. First moto Alex [Martin] and I were 1-2 out of the gate, so it was looking good. The hometown crowd was cheering us. Then I could hear the Yamaha behind me and I knew it was Coop [Cooper Webb]. I was struggling a bit with arm pump and Alex was walking away from me a little bit. I was like “Yeah, big Al!” Then Coop got in there. I would think that first moto was probably fun to watch because we were all right there for so long. I was obviously pretty bummed my brother went down in that corner, because with three laps to go it looked like he might have a shot at winning it. But he went down, and then he tried to block pass me as we were going up the RC double. I was like “I’m going to send it right here, right next to you!” [Laughs] And I did.

Jeremy I think a lot of people think because it’s your home track it’s going to be so comfortable. But does it also put some pressure on you a little bit.
I don’t think so. This year was good, obviously it’s a hometown race for Alex and I, but Coop’s been riding good. He’s been winning the last three races and had a streak going there for a bit. You know, his goal is to take the championship this year, his first one outdoors, but his goal really was to get a 1-1 performance in the Martin boys back yard. So it was nice to win it. He got it from me here last year, and it was good to take it back. I haven’t gotten an overall this season. I was a little bummed in moto two, Alex and I got out to a good start and the gooner there [Alex] hits neutral and tips it over. I was like “You’ve got to be kidding me.” [Laughs]

You’ve really turned this thing around in the last few weeks. Is it health? Is it bike changes? What’s going on here?
You know I think it’s a combination of both. The health is getting better and the bike is getting better, too. I went from the air fork to the spring, and that’s something that I really had to develop and get it to the way I like it to handle. Moto two I really felt like it was working the way I wanted it to work. We’ve been making changes to get the thing to feel better so I could feel more comfortable so I could ride more aggressively for thirty plus two.

You’ve had a lot of overall wins in your career now, but how does it rank to get an overall win here?
It’s definitely good. I remember what it was like at Daytona when I got my first pro win, that was great, but this definitely ranks up there. Winning a championship is neat, but to win in front of the hometown crowd is pretty incredible. They were chanting my name and stuff. It’s always cool to win, but it’s even more rewarding to win in front of the hometown crowd.

First moto it looked like Cooper got you, then you made a brief charge and tried to get back in it, then you lost ground again. Take me through that.
Yeah it was like a yo-yo. We were going back and fourth for sure. Alex got out front, he kind of inched away, I’d try to pull back on him, then Cooper got me, then I tried to inch up on them. They checked out a little bit but then I was able to close back in on them a little bit. The last few minutes I was really able to figure out how to ride the bike the way I needed to, but I tried to put in a charge, but by then it was two laps to go, and by then Cooper was just bringing it home.

At the beginning of the season, things weren’t going your way, you had a bike problem and fell behind in points, you weren’t feeling 100 percent. How hard was it to not just give up? How hard was it to pick yourself up and try to climb back into this?
I don’t think the hard part was picking myself back up. The hard part was just knowing I’m not going to be back to my full potential for awhile. That’s hard to go to the line when you know you’re going to give it your all—I’m a fighter, I always have been, Alex and I are bulldog kind of guys that are always going to try as hard as we can—but you know you’re not 100 percent and it’s going to be awhile before you are, that’s hard.

So where are you now, physically?
Yeah I’m getting better, feeling more spunky. I’m able to ride more during the week and feel better on race days.

Is that second moto a big breakthrough? Obviously winning is always good, but the bike changes you made, is that feeling you had in that moto big going forward?
Yeah I’m really looking forward to Washougal now. Especially because we keep improving things during the week and on the weekend. Hopefully Alex and I can have a really good weekend next weekend going into the break and have a good time and enjoy it.

Can you explain that you no longer live here on the property?
Yeah I had to buy a house and move out! My mom kept hiring a DJ to play music for the fans here at the track and it was keeping me up and night, so I had to go!

Is it okay if things get a little loud tonight?
You know I might hang out for awhile, but I’m going to mosey on out into town and sleep in my own bed.