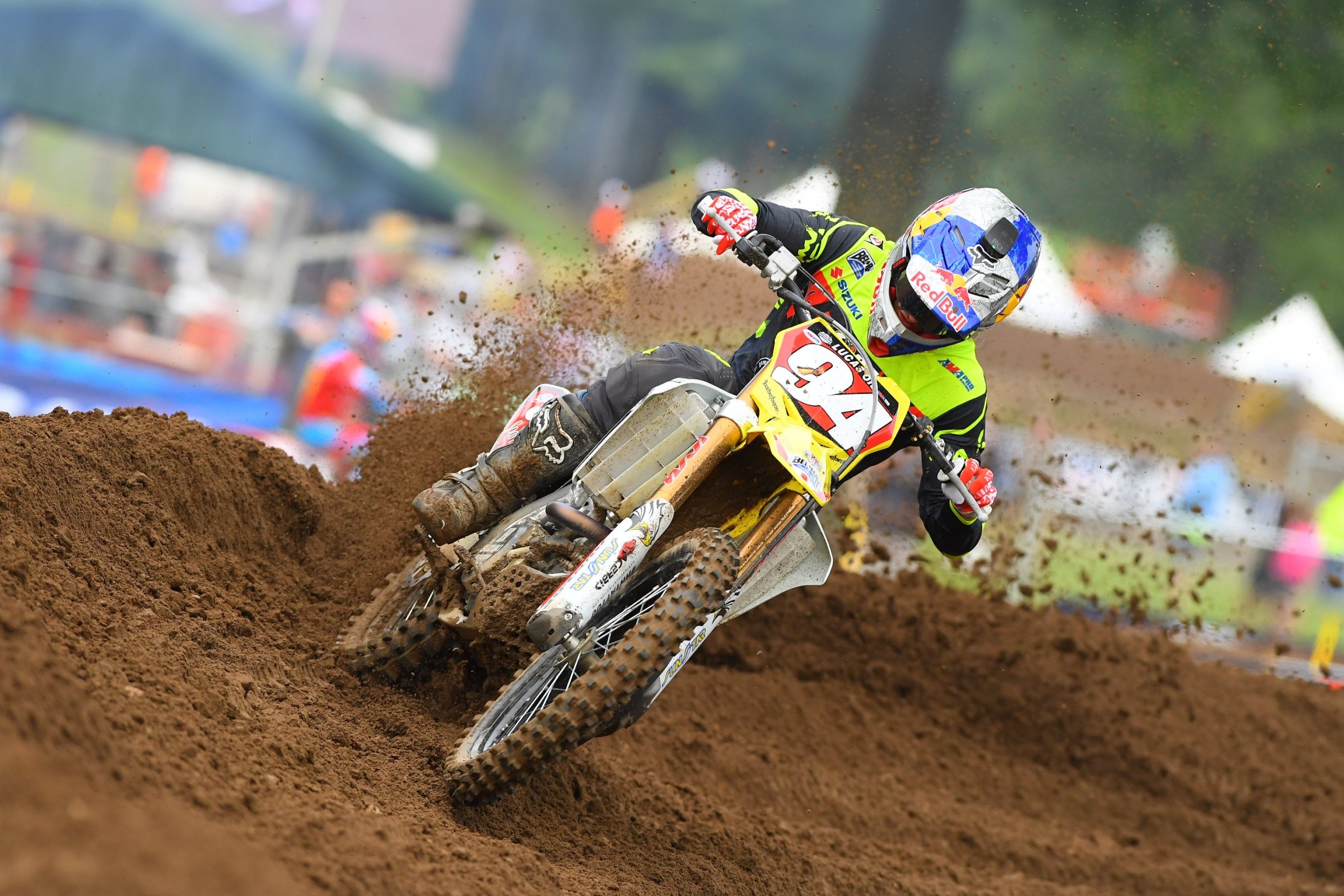 Welcome to the Motorcycle Superstore Race Day Feed where we will be updating you with moto by moto recaps, results and more from Round 6 of Lucas Oil Pro Motocross at RedBud.

The beginning was different for Ken Roczen, but the ending the same. This time the points leader was forced to chase Monster Energy Kawasaki’s Eli Tomac in the early stages. Justin Bogle once again grabbed the holeshot followed by Tomac and a host of Suzuki riders. Tomac wasted little time, making a tough pass around the outside of Bogle for the lead. At the same time, Roczen was working past teammate Broc Tickle and Yoshimura Suzuki’s Matt Bisceglia.

Shortly after working into third, Roczen passed Bogle and quickly closed on Tomac. Tomac elected not to jump LaRocco’s Leap on the opening laps. On the second lap, Roczen took advantage and took over the lead for the first time. That would be all the room he needed. He quickly opened an 8 second gap (by lap 6) and cruised to a eleventh moto win (of twelve) on the season. At checkers he held an incredible 31.281 second lead. It’s the fifth (of six) perfect 1-1 day for Roczen and fourth straight. Only a mechanical has keep Roczen from a clean slate.

Behind the top two, Broc Tickle, feeding off the momentum of his first podium since 2012 a week ago, moved into third early and held off a charging Justin Barcia to claim a second straight overall podium finish. Barcia would finish fourth.

Mistakes were the theme of the second 250 moto from RedBud. Three potential winners all went down at various points throughout the moto, throwing the overall for a loop nearly every time. First, it was Joey Savatgy. The points leader quickly jumped out to the lead before losing the front end in a corner and dropping outside the top five. A bigger mistake would come later; costing Savatgy the red plate.

Shane McElrath inherited the lead when Savatgy lost the front end, but he too would make a mistake, giving the lead to Alex Martin. It was a family affair up front as Jeremy Martin had moved past Cooper Webb for second and began pressuring his older brother for the lead. At the end of a tough roller section, Jeremy went down. He would climb back to fourth.

Alex Martin would led for a majority of the moto before Webb passed him after the finish on lap 13 (of 17). Alex would make another mistake down the stretch, giving Zach Osborne the opening he needed to move into second. Alex would finish third, just 1.6 seconds back Webb.

Back to the points leader. Savatgy was trying to pass McElrath for fourth when they jumped side-by-side over the ski jump. Savatgy lost control and went down hard. He would get back up and score valuable points, finishing 16th.

Webb would finish 1-1 on the day for the first time in his career and now leads Savatgy by 11 points.

Get to the front (quickly) and sprint. It’s been Ken Roczen’s strategy all season. It’s helped him to win nine of the first ten motos on the season. It proved a smart strategy (you have to execute, of course) again in the first moto at RedBud.

GEICO Honda’s Justin Bogle was credited with the holeshot, but was quickly passed for the lead by AutoTrader.com/Monster Energy/JGR Yamaha’s Justin Barcia, the winner of the 450 class at this same track a year ago. But it was Roczen quickly to the front. He made fast work of both Bogle and Barcia, which allowed him a clear track to build a fifteen second lead over Barcia and Eli Toamc, who’d moved into third. Here’s how it happened:

No one presented a challenge to Roczen, who’s clicking on all cylinders at the moment. He crushed the field en route a 13 second win (it was up to 19 with a couple laps to go). Roczen, who is off the best start since James Stewart’s perfect season in 2008, has now won ten of eleven motos.

Tomac would eventually work past Justin Barcia, but nearly threw away a comfortable second, stalling in a corner after the rollers on lap 14. It allowed Barcia to close to within two seconds, but he wouldn’t get any closer. Barcia would hold on for third, his first moto podium of the year.

Broc Tickle has been clicking the last two rounds. Following a 6-3 performance last weekend, Tickle finished a solid fourth. Marvin Musquin was the hard charger of the moto. He came from outside the top ten to finish fifth. Christophe Pourcel, the fastest qualifier, finished sixth. Blake Baggett, Matt Bisceglia, Andrew Short and Justin Bogle rounded out the top ten.

As the season gets longer in the tooth, it’s getting more obvious that the 250 title will go through Joey Savatgy and Cooper Webb. It won’t be the first time this year the two have battled for a title. Just one-point separated them at the end of the 250SX West Region—Webb holding on despite a broken wrist. Entering the weekend, Savatgy was just 12 points clear of Webb, who closed the gap with his first overall win of the season last weekend.

It was Savatgy’s rookie teammate Austin Forkner grabbing the first holeshot of the weekend. A host of Yamalube/Star Racing Yamaha’s were in tow, as they occupied five of the top seven spots early. Forkner led for a lap—the first of his young career—before Webb took the lead. Not wanting to allow him a clear track, Savatgy quickly moved into second. The gap remained around two seconds the entire moto—the gap fluctuating between the laps. On lap 14 (of 17) Webb put down the hammer, setting the fastest lap of the moto with a 2:00.882. It helped build his lead to 2.2 seconds. Savatgy wasn’t giving up; he cut the gap to 1.06 the following lap. Savatgy made a few small mistakes on the final lap which allowed Webb to take the win by 1.6 seconds.

“I haven’t led in a while, so I tightened up to be honest,” said Webb.

Jeremy Martin wasn’t able to get around Forkner early, which allowed his brother Alex to close the gap on both. On lap 10, following the rollers, Forkner got pushed wide, allowing both Alex and Jeremy through. Alex made his way around younger brother Jeremy as well, but it was too late to make a run at the top two. He finished third behind Webb and Savatgy. Jeremy would take fourth.

Zach Osborne worked his way from twelfth to pass Forkner for fifth late in the race. The fastest qualifier of the day, Adam Cianciarulo, took seventh ahead of Mitchell Oldenburg, Shane McElarth and Aaron Plessinger, who fell back after a top five start.

It should no longer surprise anyone that Christophe Pourcel can lay down a quick time in practice (typically coming late in the session). The Frenchmen did it again at RedBud, topping Ken Roczen’s 1:56.417 with a late 1:56.045. Monster Energy Kawasaki’s Eli Tomac also keep pace with a 1:56.846. Broc Tickle, coming off a podium performance at Muddy Creek, was the only other rider in the 1:56s with a 1:56.968. Justin Barcia was fifth with a 1:57.082.

Adam Cianciarulo has raced at RedBud just once in career (his rookie season in 2013 where he finished 12th overall), but it didn’t seem to matter in practice, as his 1:57.930 from the first session held up as the fastest time of the day. Cianciarulo has been at the front the last two weeks, but hasn’t been able to take advantage of his good starts. He’ll have the first gate pick in the first moto.

Yamalube/Star Racing Yamaha’s Alex Martin, who’s title chances have taken a serious step back the last two weeks due to a mechanical (High Point) and crash (Muddy Creek), was second fastest in practice (his time coming under much tougher conditions in the second practice). Monster Energy/Pro Circuit held the next two spots with Arnaud Tonus (1:58.413) and points leader Joey Savatgy (1:58.545). Cooper Webb (1:58.660) would round out the top five.

- Tyler Bowers in back in Lucas Oil Pro Motocross for the first time since 2009. Bowers is filling-in for the injured Josh Grant at Monster Energy Kawasaki. He qualified 25th.

- Following appearances in MXGP, Paul Coates is back competing in the U.S. He qualified 30th in the 450 class.

Since 1974, Lucas Oil Pro Motocross has ventured to RedBud Track N Trail in Michigan. Serving as the host of Independence Day weekend since 1978, RedBud will once again welcome in Independence Day, hosting the sixth round of the series.

Honda HRC’s Cole Seely is out for this weekend after undergoing successful surgery earlier this week to have a plate and four screws inserted into his right pinkie finger. Seely’s hand is currently in a split and he will be evaluated in seven days to determine if a cast is needed.

“I’m extremely bummed,” Seely said in a team statement. “I was starting to find a good rhythm and really had my sights set on getting my first overall podium and win in the 450 class, so needless to say, to have my season end with a broken pinky is disappointing.”

Seely, third in 450MX points entering the weekend, is the latest top 450 rider to bow out with injury. Ryan Dungey, Jason Anderson, Trey Canard, James Stewart and Josh Grant are also out for the weekend. Broc Tickle took advantage last weekend at Muddy Creek for his podium in 450MX since 2012. A number of riders, including last year’s 450 overall winner at RedBud, Justin Barcia, are looking to capture their first podium of the season.

Ken Roczen enters the sixth round on a record setting pace. Winner of nine of ten motos this season, Roczen is off to the best start in the class since James Stewart’s undefeated campaign in 2008. Eli Tomac was a strong challenger in both motos last week, but failed to take a moto win and lost more points in the championship. He trails Roczen by 47 after five rounds.

The 250 Class is heating up on and off the track. Yamalube/Star Racing Yamaha’s Cooper Webb won his first overall of 2016 at his home race last weekend, drawing to within 12 points of leader Joey Savatgy. But the real news came early this week, when made some remarks on his Twitter account in regards to the series. You can read more about it here.