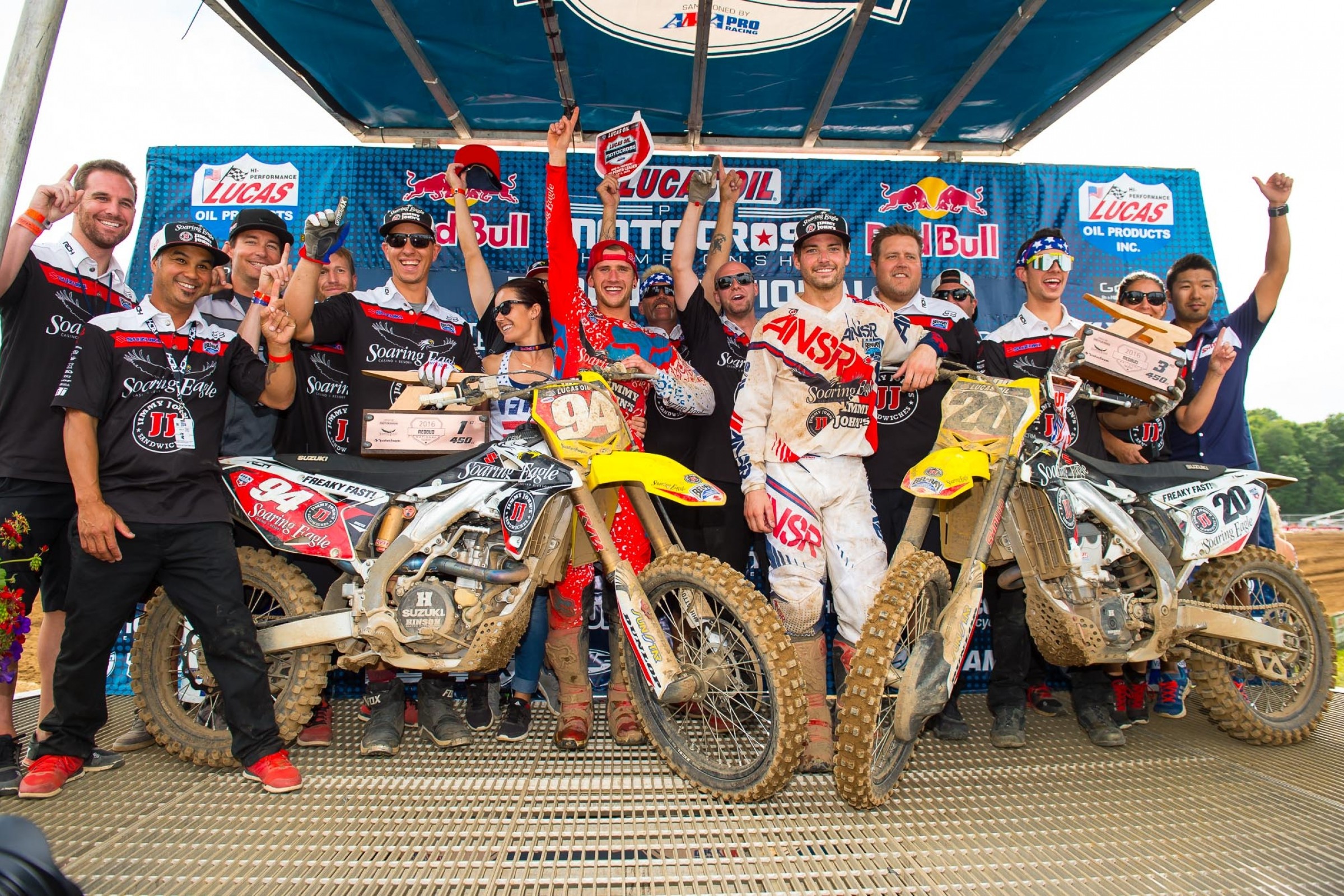 Different round, same result. There isn’t much else to say about Ken Roczen at the moment, other than he’s firing on all cylinders. Another 1-1 performance (his fifth of the season and fourth straight) at Round 6 of Lucas Oil Pro Motocross at RedBud in Buchanan, Michigan has seen him stretch his lead to 53 points—and we still have six rounds left to complete.

This round was a bit different for Roczen. He actually had to play catch-up to Eli Tomac early in the second moto—something he hasn’t had to do much in 2016.

“I was behind him last weekend too, but this time it was for a couple of laps or… I don’t know, everything happens to quick, but I don’t really care," said the Soaring Eagle/Jimmy John's Suzuki rider. "You know, I do my start and I don’t really focus on anyone else but me.”

It didn’t matter all that much. Once Roczen passed Tomac over LaRocco’s Leap early in the race he raced to a dominating 31-second advantage. Roczen is off to the best start in his career, and the best in the series since James Stewart’s undefeated season in 2008. Is this the best we’ve seen of Roczen?

“I think second moto might have been the best I’ve ridden all year,” said Roczen in the post-race press conference. “It’s funny, the more 1-1s I get the more I get pissed about that fourth place [at Glen Helen] that wasn’t really my fault [due to a mechanical]. But it is what it is. I’m having a blast riding my bike.”

Eli Tomac has to be frustrated. A week after putting the pieces of the puzzle together and challenging Roczen for the overall at Muddy Creek, Tomac was off the pace today. What changed?

“The track conditions this week were a lot rougher than last week,” said the Monster Energy Kawasaki rider. “This was probably one of the roughest tracks of the year—there were bumps everywhere. Last week was pretty smooth to where you could just ride the ruts.”

Tomac and his team now go back to the drawing board, trying to find a way to stop Roczen. A positive from the round is that Tomac is getting off to better starts. With the way Roczen has moved to the front so quickly this season, Tomac admitted that it’s put some pressure on him to get out front early.

It’s easy to forget that Soaring Eagle/Jimmy John’s/RCH Suzuki’s Broc Tickle racked up four 450MX podiums during the 2012 season. But four years later Tickle is finally reaching that level again. For the second consecutive weekend, Tickle landed on the overall podium after holding a charging Justin Barcia off late in the second moto. In the first moto, Tickle opened some eyes by actually catching a Barcia/Tomac battle and putting pressure on them both for awhile, before taking fourth. He grabbed third in moto two, edging Barcia for a podium with a 4-3. Tickle pointed to his holeshot last weekend at Muddy Creek for his sudden turnaround.

“To get that holeshot last week was a blessing in disguise,” said Tickle in the post-race press conference. “Now, I feel like I can keep it going.”

Tickle also admitted he was behind the eight ball entering the season. He says he wasn’t able to put in two full motos at the first couple rounds as he returned from a wrist injury suffered in Monster Energy Supercross.

“I came back to supercross to get on the gate, and be prepared, but I think it actually set me back,” said Tickle. “I didn’t do enough motos on the bike before Hangtown. Honestly, I was out of riding shape and I couldn’t put two motos together.”

Barcia just missed the podium but seems to be turning things in the right direction. Last year’s winner at this track, was solid again today, picking up his first moto podium of the season in the first moto, and then putting a hard charge late in moto two to almost get Tickle for third.

"The bike was a little better, we've been struggling a little bit, struggling with some stuff, but I feel like I've been riding good," said the Autotrader.com/Monster Energy/Toyota/JGR Yamaha rider. "It hasn't just been the bike, though, definitely not all the bike, I've been having some issues, too, me crashing, all kinds of stuff. But I feel like I could have maybe finished like this last week if stuff hadn't happened. First moto I got a good start, second moto I didn't and I just had to charge, charge, charge. I gave it everything I had to try to get Tickle but all of those guys are riding really good. I know there are a lot of guys absent right now but I think this pack is still damned strong."

For as predictable as the 450 class has seemingly become, the 250 class has been just as unpredictable. Joey Savatgy had shown few cracks in his armor, he’d been consistent through five rounds, and even small mistakes at Muddy Creek a week ago didn’t cost him too much. RedBud would be a different story. Following a second in the first moto to Cooper Webb, Savatgy got out to an early lead in moto two before losing the front end in a corner. That pushed him outside the top five, but not in a huge hole. He was actually working on Shane McElrath, trying to take over fourth, when they came off the ski jump side-by-side and Savatgy lost control and went down hard. He got back up slowly, then took a trip to the mechanic's area to straighten the bike out before going back out on the track. He salvaged a sixteenth for a valuable five points. Savatgy, who entered the weekend with a 12 point lead, now finds himself 11 back of Webb.

Savatgy had a twenty-point lead just two races ago, but now he has faltered just as Cooper Webb has caught fire. The Yamalube/Star Racing Yamaha rider was brilliant today, showing every facet of his game en route to the first 1-1 of his career. In the first moto, Webb got into the lead early after passing Austin Forkner and held off Savatgy for the remainder of the moto. In the second moto, he actually had to come from behind, passing Alex Martin after the finish line at the start of lap 13 (of 17) and held off Martin and eventual runner-up Zach Osborne in a sprint to the finish.

“The first moto I rode a little tight. I haven’t won a first moto in a long time, so that was nice and it gave me confidence heading into the second moto,” said Webb in the post-race press conference. “We made some bike changes and I think they definitely helped in the second moto.”

Webb now holds the red plate for the first time in his outdoor career as the series heads to Southwick next weekend. He also has back-to-back overall wins, and his wrist injury appears to be behind him. Things are really looking up right now for Webb.

Everything that could go wrong has gone wrong for Alex Martin over the last few weeks. A mechanical at High Point, followed by a crash in the first moto at Muddy Creek, has seen his championship hopes take a massive hit. Martin said it was important for him to come out today and put in solid motos, but that he was still disappointed letting a late lead slip away. What happened down the stretch?

“I got roosted by a lapper pretty bad before LaRocco’s Leap and the breathing system I have on my goggles fell off and kind of went in my mouth so when I went over the finish line jump I was trying to take it off, so that’s why I was basically straight up and down and Cooper just came around the outside on a mission and scrubbed about three or four feet lower than me,” he said in the post-race press conference. Alex reminded us that he's finished on the podium in all six second motos this year--but has yet break through for a moto win.

Zach Osborne rebounded from Muddy Creek with another overall podium, but he had to work for it. Starts once again held him back, as he had to charge from outside the top ten in both motos. “Right now my starts are terrible,” the Rockstar Energy Drink Husqvarna rider, who went 5-2 for third overall, said in the post-race press conference. “I think my average start this year after the first lap is 12th or something. It’s not ideal to start out there. I’m riding well, it’s just tough right now on the starts.”

Another tough day for Jeremy Martin, who was fourth in moto one. Finally in moto two, J-Mart showed the spark we had seen from him over the last two seasons, working his way past Webb and challenging his brother Alex for the lead. It looked like the old J-Mart was on the way back, but then he tossed it away with a crash after the whoops--ironically the whoops that are modeled after those at his home track at Millville, Minnesota. He fell back to about eighth but was able to fight back for fourth, and the 4-4 scores gave him fourth overall.

Shane McElrath almost did it again. After leading most of the second moto last week, he got to the lead in moto two again after Savatgy tipped over. But then McElrath made his own error by bouncing off the track, allowing the Star Racing Yamaha freight train of Webb and the Martins to get past him. The TLD/Red Bull KTM rider ended up fifth in the second moto and fifth overall with 9-5 scores.