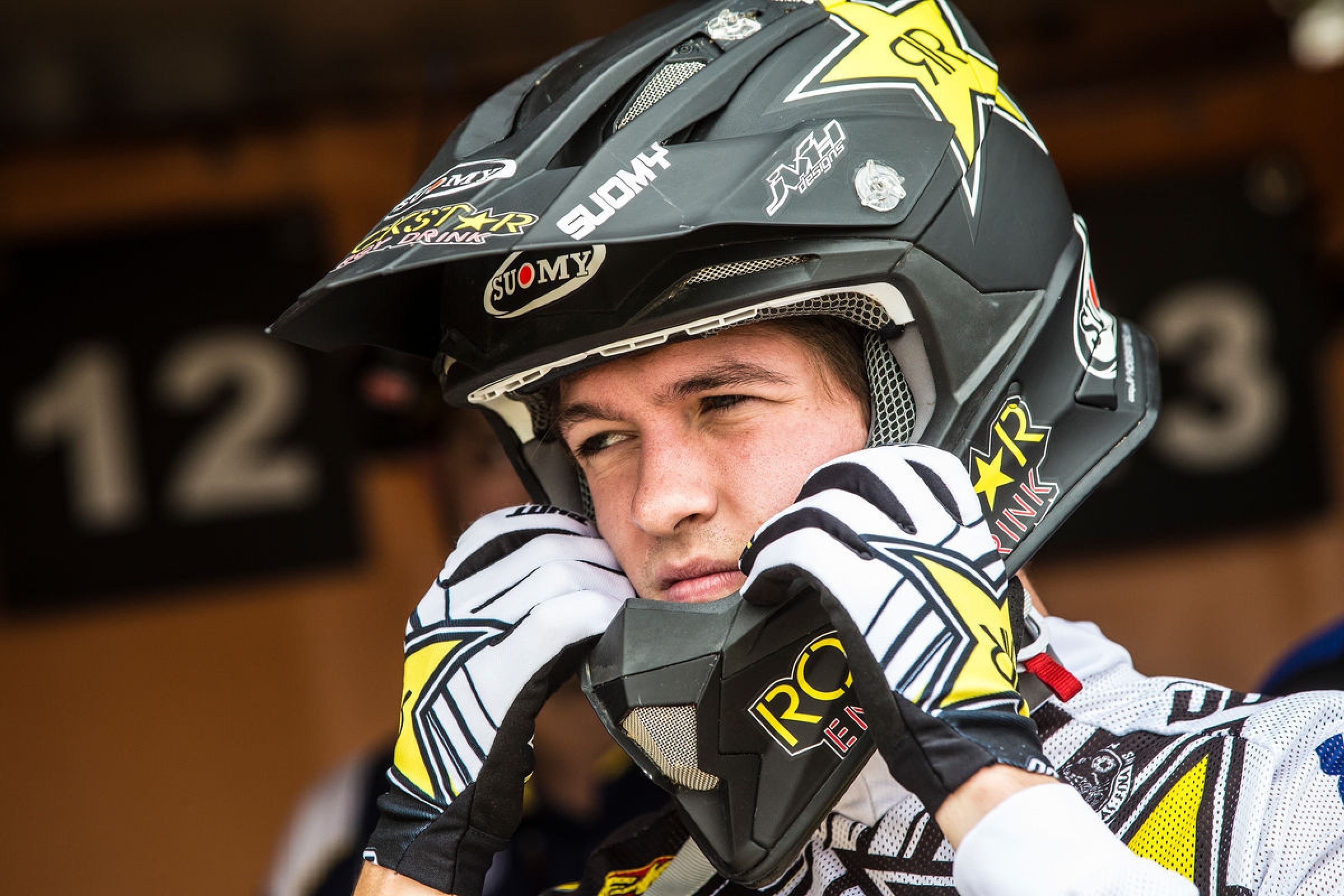 In 2014, Thomas Covington traveled to the opening round of the FIM World Motocross Championship in Qatar to use the series as a warm-up for an expected Lucas Oil Pro Motocross debut later that year. Three years later Covington is in Europe chasing a championship in MX2. After two years with Kawasaki, Covington signed with Rockstar Husqvarna Factory Racing. Injuries have slowed his first year with team, but this past weekend at Mantova in Italy, Covington had a breakout ride and came up one point shy of the overall podium. Steve Matthes caught up with the Alabama native after the race to talk about his day and his GP experiences.

Racer X: It’s been an up and down season for you. I guess your ankle or foot or something was hurt. But today was great, man. Almost got on the box first moto, fourth overall. It’s a bit of a bummer that [Dylan] Ferrandis got you on the last lap, but still a good day.
Thomas Covington: Yeah, for sure. It was a good weekend. The first half of the season has been a bit rough. I had bike problems in Qatar, I had food poisoning in Thailand, and then after that I ended up breaking my ankle and then my hand also. So that put me out for over a month. So now this is my third race back from injuries. We’ve just been getting better each weekend. Finally I put two solid motos together today and just missed the podium, so that’s a bit of a bummer. But it’ll come. Just got to keep working. We’re going into a little break here. We’ve got a three-week break. We’re going to do some Dutch Championship races and then go to Czech Republic, so I’m looking forward to rest of them.

You were probably marking Ferrandis in that first moto, checking him out in some corners.
Yeah, for sure. He actually wasn’t that close until the end. I was just dead from this heat. The last two laps I was just tired. But then second moto I had the podium sitting in fifth right there, but then Ferrandis passed [Jeremy] Seewer behind me on the last lap to get him the points for the podium, but whatever. I’m happy with the top five this weekend. Just got to keep going and hopefully I’ll be peaking for the last two rounds in the US.

There was a bit of a gate issue with the first. Did it affect you at all the second moto?
Yeah, I was pretty pissed about that, actually. I don’t know what happened. It nearly dropped after two seconds and then everyone’s just like, what the heck just happened? Looking up. And then the gate drops. Anyway, the whole first lap I was just cruising. I thought for sure they would red flag this. And then they didn’t red flag it so I was like, well, I guess I’d better start going.

I didn’t see it but I was talking to a guy who did see it. He said it was an obvious gate malfunction, and that the red flag should come out, and then nothing happened.
Yeah, they’ve been having issues with it all weekend. I don’t know if you saw the qualifying race yesterday. The gate just didn’t drop, and then they had to reset everyone. It took like ten minutes. But whatever, it happens sometimes. But for sure, it should have been red flagged.

This is Florida weather here this weekend.
Yeah, for sure. It’s not usually this hot here. I’ve never seen it this hot in Europe. It’s something different for sure.

Overall on the day, I guess obviously get back on the box and start racking up podiums. [Jeffrey] Herlings seems like he’s on it again, but why not? From here on out after the break you can get on the box, huh?
Yeah, for sure. That’s always been the goal is to be on the podium and consistent top five. The rest of this year just going to try to get some confidence going and get stronger and then next year’s really where we want to kill it.

You’re enjoying it over here, man. We had you on the Pulp show a while back. You’re digging it. Like you said, you love the culture, you love the travel, new and exciting tracks. It’s kind of neat.
Yeah, it’s awesome. I’ve got my dad over here this weekend so that’s cool. We’re going to go over to Venice tomorrow and hang out a little bit. Then I’ll fly back to Belgium and get back to work. But it’s cool. I really enjoy it. I know some guys in the past have had bad experiences with it, because it is gnarly. It is tough. Even talking to [Chad] Reed here the last couple weekends these tracks are just brutal, with like six or seven classes racing on the weekend and not much track where it just gets hammered.

In America they’re ripped, they’re watered, they’re worked in-between motos. When you come over here on a Saturday they don’t touch it until Sunday really.
For sure. It’s a totally different style. The lines and everything, like Reed was saying. Just a lot more traction always in the US because they rip it deep and they water. They actually know how to prep a track. Here it’s like we got different guys prepping the track every weekend, like Italian guys this weekend. The track’s completely different every weekend. So it’s really challenging but I think it makes you a better rider.