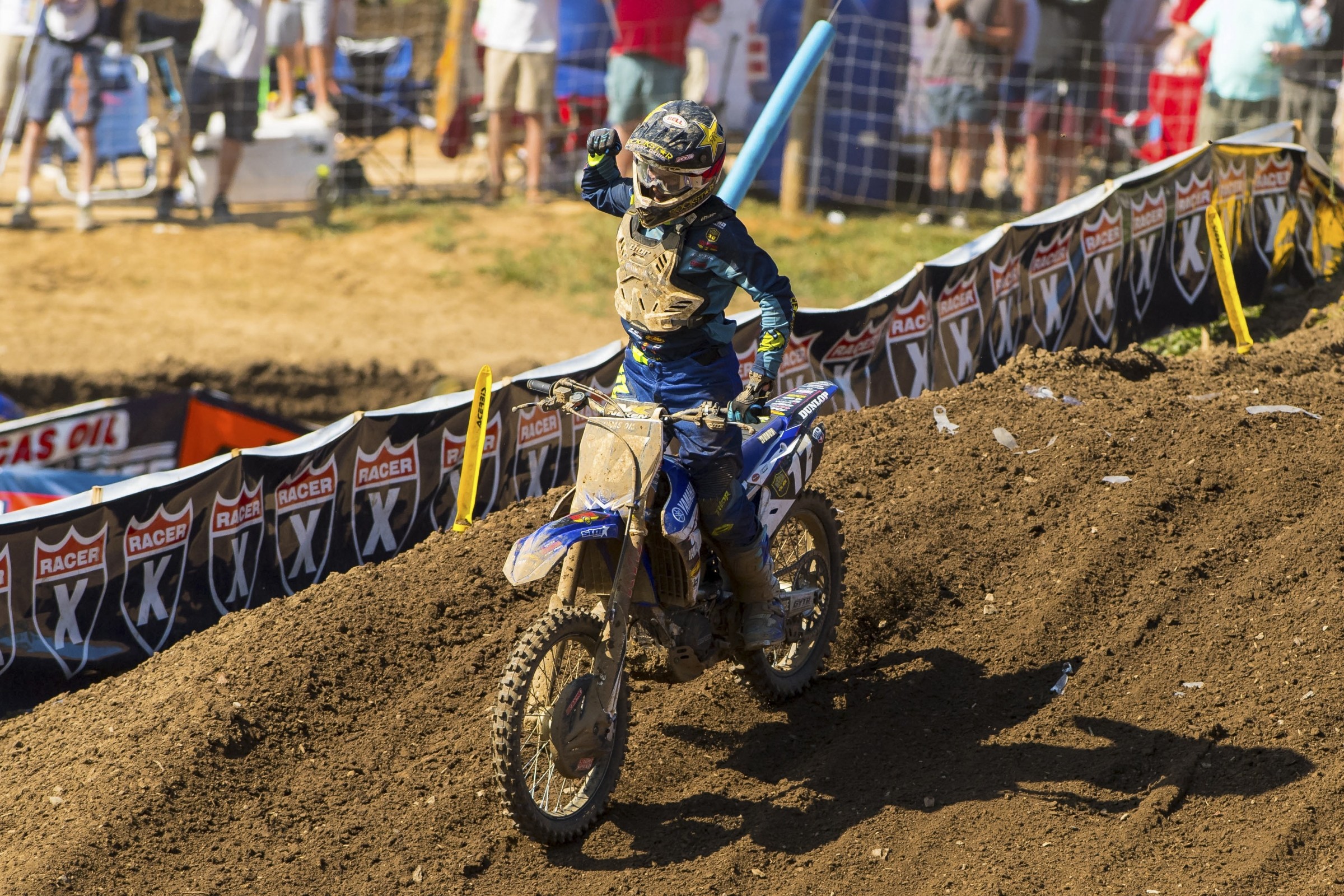 Yamalube/Star Racing Yamaha’s Cooper Webb came into this Lucas Oil Pro Motocross Championship dealing with a broken wrist. That meant he’d probably not be perfect in the first few races of the season, but even when he was still pulling down podiums and points, he still wasn’t happy!

His home race at Muddy Creek in Tennessee finally provided what he wanted: better riding, and a win. He was much happier this time, and it showed in the post-race press conference.

Racer X: Cooper, you had your work cut out for you getting to where you did in the motos, but you ended up with a second and a first and the overall. Tell us about that.
Cooper Webb: Yeah, I didn’t make it easy on myself getting bad starts in both motos. The first one I put my head down and got into second, I should have kept pushing but I kind of eased off and took second. I got yelled at for that. The second moto I wasn’t going to give up and that’s exactly how it worked out. I was able to keep pushing and make some aggressive passes. It worked out and I got my first overall win of the year.

It seemed like once you got the ball rolling and got the momentum going today you were hard to stop.
Yeah. We tested a lot this week on the East Coast and got some really good settings and feedback. I think that helps with my riding. But honestly this weekend, it was the fans. Every lap I could hear them on the side of the fence cheering and that made me just keep going, just keep going. I could hear them. Honestly at one point I saw Joey [Savatgy] crash and I just thought, be smart and don’t crash. But then I actually did crash, but he crashed again. I could have easily just settled for third but I was stoked to be able to push through and not give up. I think that’s the best I’ve ridden in a long time.

With Shane McElrath leading that last moto, do you think he made a mistake and you were able to catch up, or did you step it up?
I think the lappers probably didn’t help him. It was a little one lined, for sure. But I had some good lines. It was cool, for sure. It was like amateur days, Shane and I. We were battling here at this track on 50s so it’s pretty cool to have two North Carolina boys 1-2.

What happens in the second half of these motos? First part of the motos is okay, but you really seem to get going in the second half.
I don’t know! I’ve been trying during the week to get my intensity at the beginning, but I guess that’s just the way I operate. Also, my bike is good, but I haven’t felt 100 percent great with it yet. So it’s hard to push right from the start on something you’re not 100 percent on. This was the first week I was a little more comfortable, felt more like one with the bike, and that always helps. Hopefully we can get that going. It also helps if you get better starts. We have to work on some start stuff and get that better for next weekend.

Did you say you crashed in the second moto?
Yeah. Me and Adam [Cianciarulo] got together. He was going outside and I was going inside and our lines met. We actually both went down. Actually, I didn’t know and didn’t expect that to happen. Our lines met and we ended up hitting each other and next thing I just slid out and he ended up on the ground as well. Joey actually got back by us and then obviously Joey ended up having what looked to me like a pretty good get off.

So now people are going to say “Oh! AC and Webb got together!” But you said on the podium that it was an accident?
Yeah, absolutely. I didn’t mean to do it. I tend to ride aggressive but that wasn’t one of those. Like I said, he was going out to in and I was going in to out. It was one of those corners were a lot of riders were going in to out so I just thought that’s what he was going to do, and then our lines came together. So I do apologize for that. I’m sure he’s not stoked on it but I didn’t deliberately do it. I think it was a racing incident, for sure.

You haven’t been happy even with podiums. Last week you were on the podium at High Point and you didn’t seem pumped at all. So what kind of difference is this in your attitude now that you got the win you wanted?
It’s awesome. This is what we work so hard for. I think it was a little bit myself, a little bit the bike, and just a lot of things I had to get better at. My corners weren’t good. Just a lot of things. I think I was riding timid for whatever the reason may be. So today it was like, “If you keep riding timid you’re going to get beat.” So for whatever the reason is, I rode better today.

Who yelled at you after settling for second in the first moto?
Swany [trainer, Gareth Swanepoel]. He got on my pretty good. I couldn’t back down in that second moto.

Okay, we hear you and a bunch of teammates are living together and riding together during the week, and then you’re obviously traveling together and racing together here on weekends. What’s that like?
It’s been different. Probably different than the way a lot of people do it but it’s been good so far. We have good guys. Mitchell [Harrison] is a rookie and he’s energetic, he’s always riding hard anytime he’s on the track. Then you have Aaron [Plessinger] and then myself, we’re all good riders. It’s a good group. We have Swany there and some other amateurs and pros. We get to ride different tracks, not just South of the Border. We’ve ridden at Club MX, we’ve ridden some private tracks, I’m sure we’ll make our way to JGR. It’s been good to back in North Carolina, where I’ve grown up.

So are you keeping the place clean? Who is handling the dishes, the laundry, all that stuff?
We all do our part, but it’s mainly myself. AP [Plessinger] is kind of a slob! [Laughs] I also want to apologize for being short in the press conference last week. I had a flight to catch. So, sorry about that, guys.