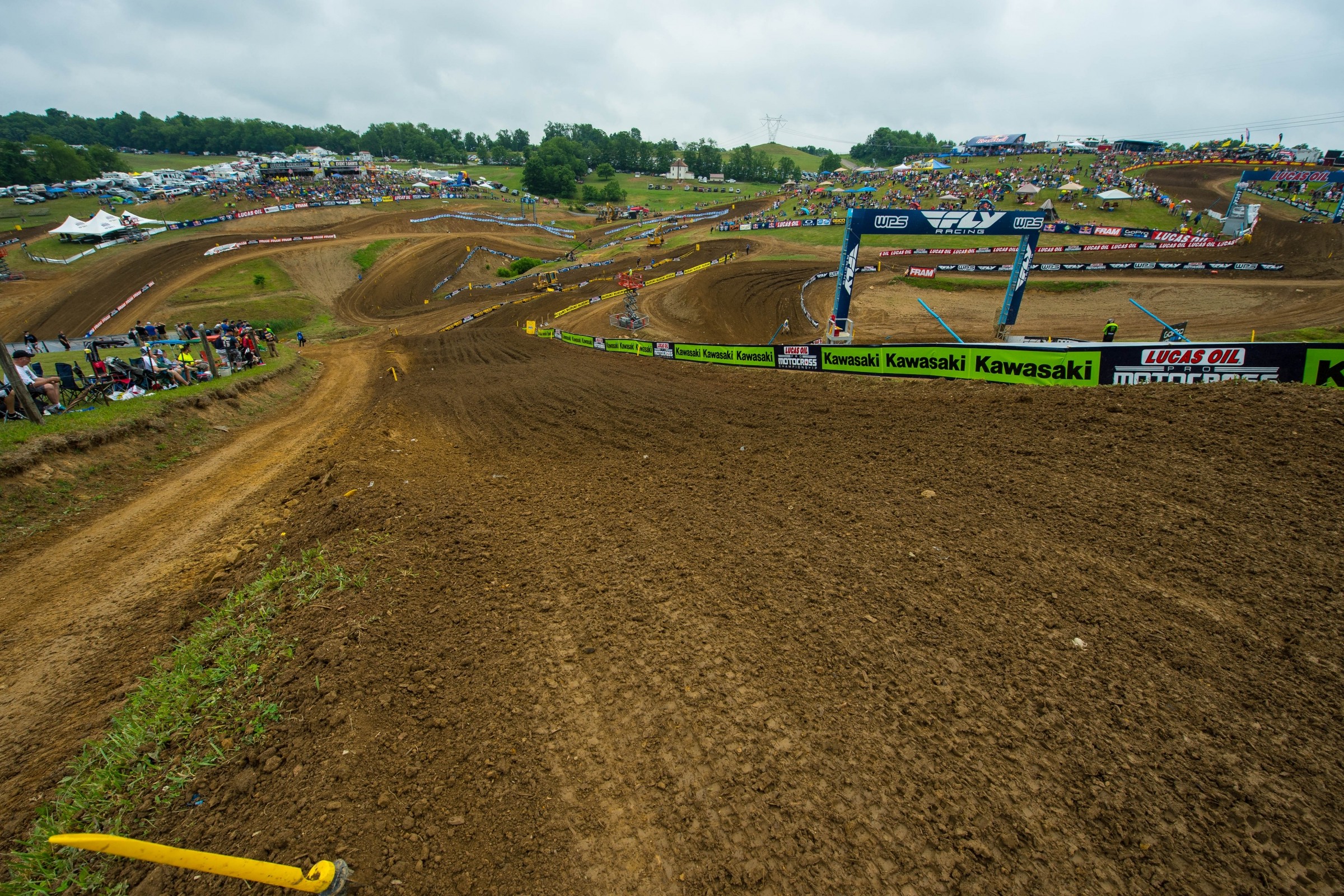 Mt. Morris, Pennsylvania is host to Round 4 of the Lucas Oil Pro Motocross Championship and also sits in the shadows of MX Sports headquarters based in Morgantown, West Virginia. A track rich in tradition, the national is also known as High Point. The name originated from the old Hi-Point boots which was once a sponsor of the event and the name just stuck over time. Regardless if you call it Mt. Morris, High Point, or like many in the history of this race who couldn’t remember the name of the event or even their own name the day after the event, it’s still one of the hallmark events on the calendar.

The track here is marked by lots of elevation change and endless off-camber turns. My first time at this event was 1995 for amateur day before the national and I can still remember the fear I felt as I saw the long uphills and downhills driving in. Television did the track zero justice, as it often does. The big deep ruts in the turns led to steep downhills, where as a pro, I would be accelerating hard and unafraid of the descent. But as a 15-year-old Intermediate rider, I wanted no part of the throttle and surely went through a set of brake pads each moto. It was a truly humbling experience and opened my eyes to the skill set I would need to gain before I would be racing against America’s best professionals just two years later.

The track has gone through several changes since those days but the basics remain the same. The long uphill start is a horsepower robber and is heavily controlled by the inside. I have seen good starts come from the outside but that requires an incredible jump out of the gate and a fearless willingness to hold the throttle wide open all the way to the fence and stay there. Most times, though, the inside riders will either carry the lead through the middle or brake at the top to stay in the shorter inside line around the long sweeper. It’s always fun to watch those who didn’t get the best start push the limit on the next downhill and run it deep into that right-hand turn. There is always a few who will come barreling down there and somehow turn a mediocre start into a top ten position. Fortune usually favors the bold—usually, anyway.

The track doesn’t get overly rough. It’s more of a finesse track that requires elite balance and throttle control. Riders like Christophe Pourcel find this track right up their alley. Temperatures are usually reasonable which makes this much more of a thinking man’s race than some of the other rounds that will require next level fitness and strength. Finding the tiny inside line that keeps you from dropping down the off-cambered turns, drawing flowing lines, and carrying momentum when traction breaks down will be key points this Saturday.

Ken Roczen has “won” every race so far this year. By that, I mean other than his suspension failure in Glen Helen, he has been the best rider on the circuit. I don’t see him slowing down anytime soon.

Joey Savatgy bounced back ferociously in Colorado, winning the overall and taking the points lead back from the Martin brothers. He had questions to answer after a disastrous Glen Helen but did so in convincing fashion. He proved he will be here for the long haul.

Alex Martin may have lost the red plate but he was great at Colorado. He was taken down by Plessinger’s bike or he may have given Joey Savatgy all he wanted. This is the story of the summer so far.

Cole Seely isn’t known as a great outdoor rider. That’s not a knock on him; it’s just based on past results. He is quickly changing that perception, though, with strong rides so far. Can he keep up this level as we move east?

Ryan Dungey suffered his first injury in a long, long time. He is arguably the most dependable rider in motocross and it’s a bummer to see him unable to defend his #1 plate. It would have been fun all summer long to watch he and Ken Roczen battle for American motocross supremacy.

Christophe Pourcel was a podium threat last season. I even thought he might sneak a moto win in there along the way. That same form just hasn’t been shown yet as supercross injuries have held his progress at bay. This Mt. Morris track is a chance to turn it around, though.

Ken Roczen adds Dunkin Donuts, Chips Ahoy chocolate chip cookies, Breyer’s Ice Cream and Aunt Jemima’s Syrup to his Jimmy John’s sponsorship, meanwhile maintaining there is no coincidence to the foods he was disallowed in his former training program.

There are several headaches and queasy stomachs for all of those wearing Racer X apparel on Saturday morning.

Blake Baggett returns to action and immediately jumps back into the top five overall.

With Ryan Dungey out for the summer, Roger DeCoster is seen quietly weeping several times during the day.

Marvin Musquin turns in his best finish of the outdoor season.