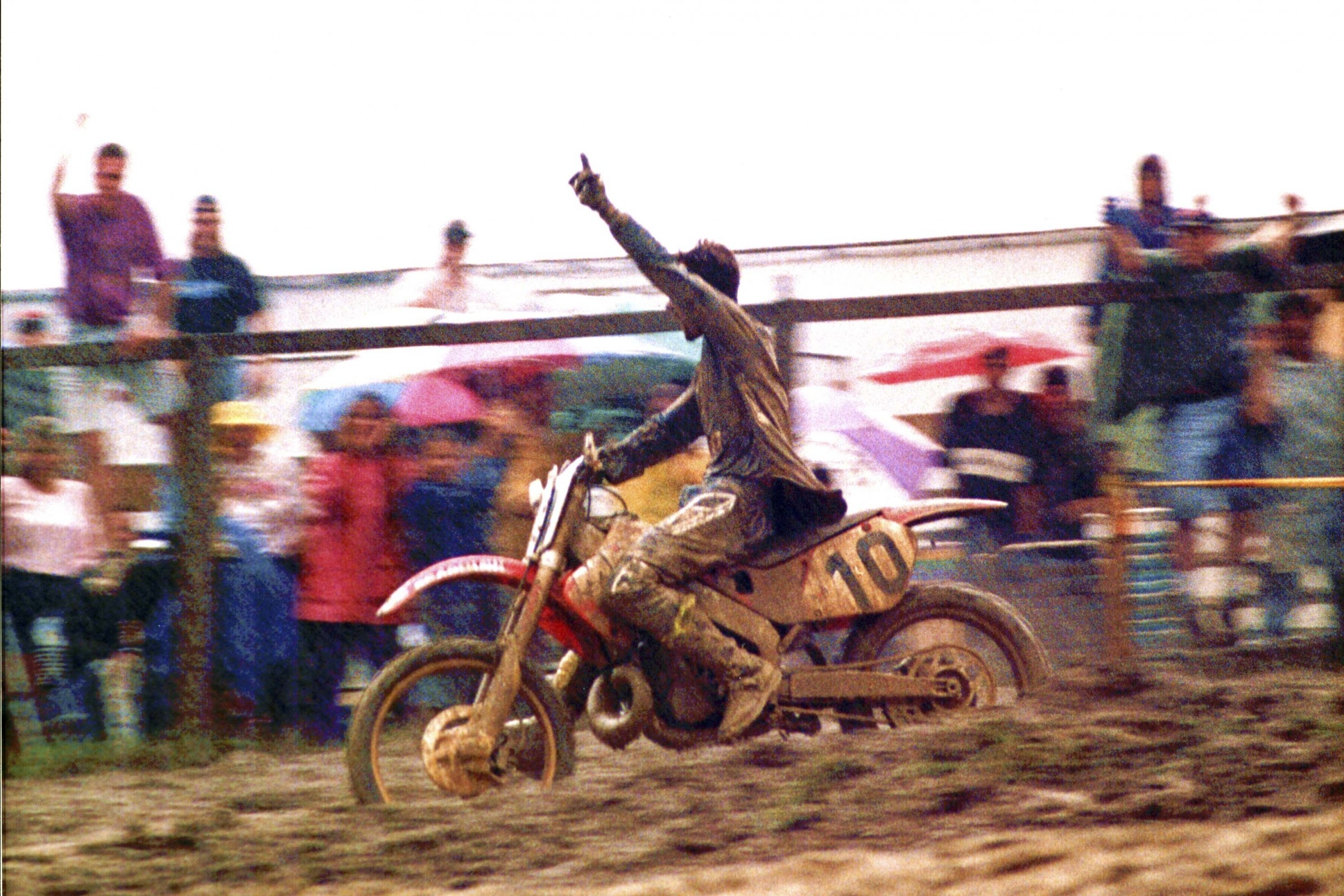 This Saturday, High Point Raceway will celebrate its 40th year of hosting the Lucas Oil Pro Motocross Championship. The High Point National made its debut in 1977 and has witnessed a plethora of special moments in its history. From upset specials to home cooking, to mega mudders to epic battles—all with the backdrop of some of the hardiest motocross fans around, usually watching the Nationals in the east for the first time each season—this race has seen it all. To celebrate, we’ve decided to look back at some of the greatest moments.

Make sure to tune in Saturday for Round 4 of the championship, the 40th running of High Point. It's such a big moment that the NBC Network will even carry the coverage. The broadcasts will air live on MAVTV beginning at 1:00 pm ET with the first 450 and 250 motos. NBC will carry the second 450 moto live at 3:00 pm ET with NBC Sports Network airing the second 250 moto at 4:00 pm ET.

The very first High Point National saw an epic battle between 250cc championship contenders Tony DiStefano, Marty Smith and “Jammin'” Jimmy Weinert. Team Honda's Smith had a long shot at the title, while Tony D. was closing in on what would be his third straight. The climactic moment came when Marty nearly looped out at the bottom of the old off-camber down by the woods. He lost the lead to Suzuki's DiStefano and with it any chance of winning the title.

In a rare stand-alone 500 National, Yamaha's Rick Burgett took the overall win on his way to the championship that summer. His steady 3-2 finishes were enough to top Marty Smith's 1-6 and the 9-1 of Mickey Boone, who was riding a works 500cc Suzuki.

Ricky Johnson, riding a yellow Yamaha YZ250, wins his first AMA MX/SX, in what will be a Hall of Fame career.

(Extra: Honda factory riders Darrell Shultz and Danny "Magoo" Chandler duel it out for the 500cc Class win, splitting moto wins. Shultz got the overall and would go on to win the championship.)

These two go together for a specific reason. In both years the 125cc class saw someone go down off the start, then come back through the pack and pass all 39 of the others to win. In 1983 it was Team Suzuki's Mark Barnett, the three-times running class champion; in 1990 it was Honda's Jean-Michel Bayle.

(Additional info: Neither Barnett nor Bayle would win the title that year, Barnett losing to Honda's Johnny O'Mara, JMB to Suzuki's Guy Cooper, after having broken his arm at Washougal while leading by nearly a full race in points.)

In two extremely close 125cc motos, Kawasaki's Jeff Ward and Honda's Johnny O'Mara would slug it out, with O'Mara winning the first moto and holding the lead in the second moto right down to the last corner, where he hit a kicker and his hand went off the bar. Ward seized on the mistake to make a pass on the inside and steal the moto win as well as the overall from the defending AMA 125cc Motocross Champion.

The Beast from the East, Damon Bradshaw, took on his rival Jeff Stanton in four remarkable motos in the summers of '91 and '92, splitting the High Point overall wins and earning a place in MX lore as two of the best duels ever. Seems like they spent most of two years racing side by side at this track.

Maybe the muddiest race this place has ever held, Manchester Honda-backed Damon Bradshaw, back to full-time racing after a length hiatus due to burnout, delivers a stunning win in what will be his one and only victory aboard a brand other than Yamaha. It was also the final major win of his career. The torrential showers had turned parts of the racetrack into small ponds of water, and Bradshaw successfully maneuvered his way around, making a late pass on Larry Ward to seal the overall, while also not letting his bike drown out. After winning the race he took off his jersey and helmet and did a victory lap around the battered track. High Point was about as close at the Nationals came to Bradshaw's base in North Carolina, and he always excelled on the track, rain or shine.

(Added info: Team Honda's Scott Sheak won the 125 class, his one and only win in AMA Motocross.)

Kelly Smith's breakthrough win in a muddy 250cc class marked the first-ever AMA Motocross win for KTM, with expert wrenching from Steve Matthes. (Whatever happened to that guy?) Smith went 1-4 in the 125 class, having taken advantage of rookie Travis Pastrana getting stuck in the mud in the first moto while vying for the win and finishing 16th. Pastrana won the second moto but the damage was done, and Smith snatched a historic win for the Austrian brand.

(Bonus: Smith also won KTM their first-ever AMA Arenacross race, and he very nearly won the first 125 SX for the brand, at St. Louis '99, only to taken out on the last lap by a charging Ernesto Fonseca.)

Monster Energy/Pro Circuit Kawasaki's Mike Brown and Red Bull KTM's Ryan Hughes engaged in an epic battle for the 125 Class win, banging into each other and pulling no punches. They split moto wins, with Brown earning the overall. Brown's teammate Eric Sorby would finish third.

(Trivia: Nine riders in the top twenty of the 125 Class hailed from foreign countries.)

In the midst of a remarkable winning streak that would stretch from late 2003 to Hangtown 2006, Ricky Carmichael would top Kevin Windham in a couple of epic moto battles.

The High Point National would see two different future stars win their first-ever AMA Pro Motocross race. In '05 it was KTM factory rider Mike Alessi, and in '06 it was Monster Energy/Pro Circuit Kawasaki's Ryan Villopoto. They would go on to much different careers, with Alessi being a steady front-runner, but never a champion, while RV would win nine major titles before retiring last summer.

(Extra: In two epic battles in the 450 Class, Suzuki's Ricky Carmichael would beat Kawasaki's James Stewart in '05, Ricky having the horsepower edge since Stewart was still on a Kawasaki KX250. It was one of their first showdowns against each other on a motocross track. RC would do it again in '06 after Stewart crashed spectacularly on the downhill jump right besides the starting line.)

In what may go down in history as the last major win of his career, James Stewart won the 450 Class aboard a Suzuki RM-Z450, topping KTM-backed Ken Roczen and Honda's Trey Canard. Check it out here.

(More info: After the race Stewart would be informed by the AMA that he had failed a drug test two months earlier at the Seattle SX and would ultimately be suspended for 16 months by the FIM.)

Want to see the results of every past High Point National going back to 1977? Visit the Racer X Vault.