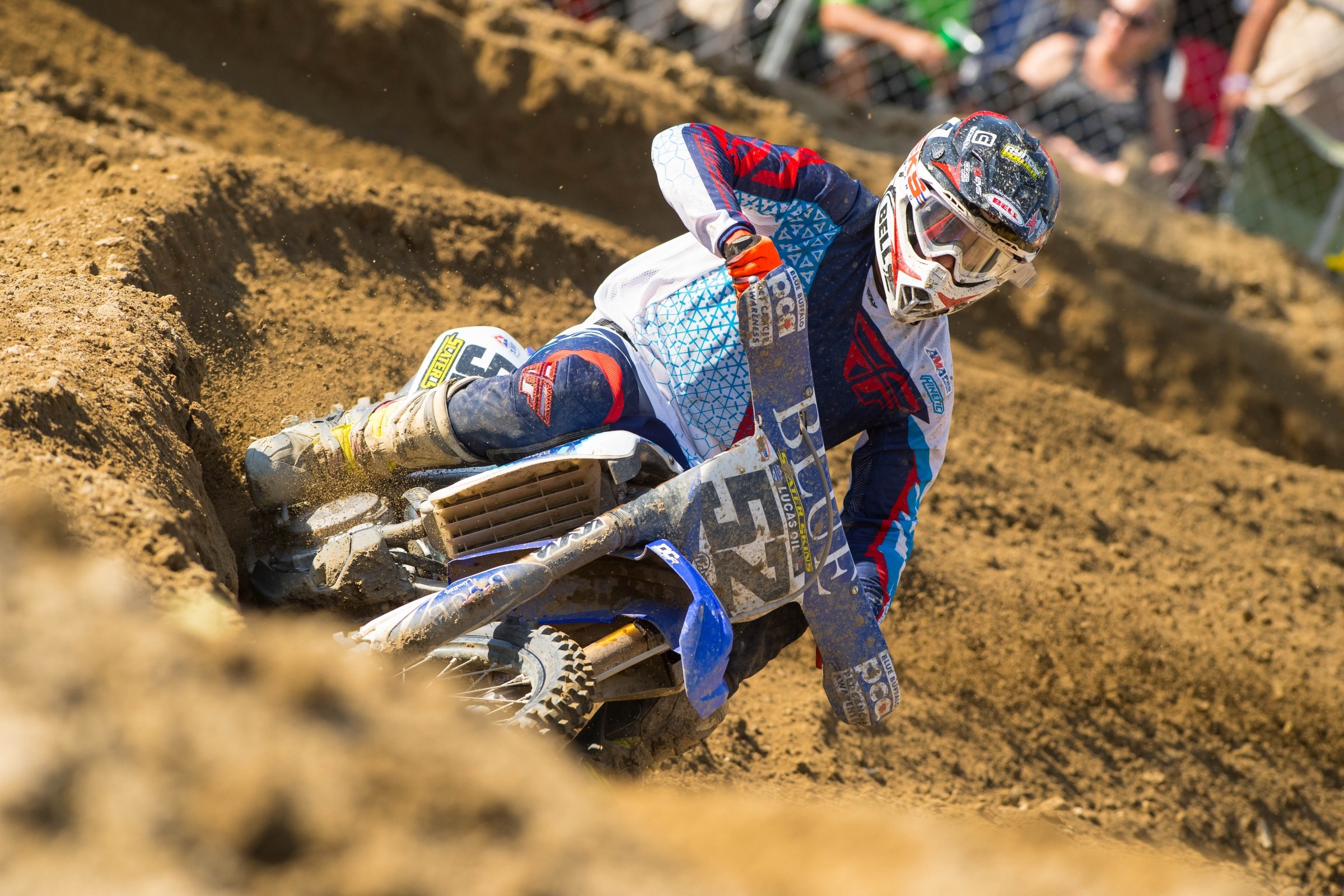 Ben LaMay is one of those guys that can adjust to any situation. Need proof? This year he dropped down to a CRF250R and raced AMSOIL Arenacross for the TiLUBE/Tuf Racing Honda team. As the arenacross season came to a close LaMay was offered a deal to race the Costa Rican National Championship. He would be riding a KTM 450 SX-F and fly down once a month for that series.

Two weeks before the start of the Lucas Oil Pro Motocross Championship the BLUE Buffalo/Slater Skins Yamaha team called him and put together a deal to race the entire summer. LaMay had already committed to riding in Costa Rica, so he could only race nine of the twelve rounds.

For a guy who had absolutely no idea in December how he was going to go racing in 2016 things have definitely turned around. LaMay will race every round of the American series except Southwick and Budds Creek (he already missed Hangtown) when he travels to Costa Rica. Despite not having much spare time, LaMay was nice enough to take our call on Tuesday to get an update on his busy summer.

Racer X: Ben, what’s going on?
Ben LaMay: Not too much, man. I’m just waiting for the ground to dry up so I can ride!

We tried to schedule an interview with you last week, but you were doing the FCA riding camp. How did that go for you?
It went well! We had like 70-80 kids I think. We had nine different trainers for the three days. We hung out, did a bunch of chapel services, a bunch of kids learned some good stuff, and I met a lot of people. It was cool.

Have you ever done anything with the FCA camps before?
No, I hadn’t. It was new to me and I enjoyed it. I’ve done some regular camps by myself but never with a big group.

You’re a busy man this summer. Fill us in on where you will be racing the next few months.
I’m doing nine of the outdoor rounds, so I’ve got seven more to do now. I’m also racing the Costa Rican Championship. That’s my main thing right now because I had that deal lined up before anything. At the end of arenacross I had it lined up and then this outdoor program came up right before the series started. I don’t have many weeks off. I’ll be racing in Costa Rica until November.

How did the Costa Rican deal come about?
Just talking to some of my friends I had heard they were looking for an American rider to come down. Tyler Bowers did it a few years ago and won. Colt Nichols went down there as well and won it. Cole Thompson is down there now with me. That’s pretty cool. The first round was back in April and then the second one was the same weekend of Hangtown, which is why I missed that round here. It’s pretty much one round every month.

What’s the weather like down in Costa Rica right now? I’d assume it’d be pretty hot.
It’s hot! At the first round it was only around 90 degrees, but it was so humid. I thought I was going to have a heat stroke in the motos. Each moto is still around 30 minutes down there. You just sweat constantly.

What’s the competition like there?
I’ve gotten second both times to Cole Thompson. For the Costa Rican guys they have Roberto Castro and he’s the fastest rider down there. There are a couple of other fast guys, but Castro is the fastest I think.

What is the atmosphere of the race like?
Usually we fly down on Thursday or Friday and then we have practice on Saturday and the race is on Sunday. I’ll fly home on Mondays and the time change isn’t that different. It’s only about an hour difference. The dirt is really hard and dry. They don’t prep the track at all and it’s like riding at some of the California tracks after they have been ridden on a few days. They are just blown out and dry.

So tire pressure is definitely important then…
[Laughs] Yeah, it took me a while to get used to my suspension too. What I have set up here in America is different from what I have down there. You are literally wide open in fourth gear and the track is smooth, however you get these choppy bumps from the blue groove. It’s a different feel and the suspension doesn’t work as well.

Are you making money this summer then?
Right now I’m racing to just pay the bills. I’m all about living my life, having fun, and paying the bills for my family. That’s why I raced arenacross, that’s why I’m racing in Costa Rica, as well as the outdoors here. I just love racing and I try my best no matter what. The bottom line is that you have to pay your bills and make money. That’s where I’m at right now.

"I guess I can’t complain about the way my life is right now. It’s really awesome."

Let’s switch gears and talk about the outdoor series here. Your new deal came up later on, so tell us about your ride.
Yeah, I’m with the BLUE Buffalo/Slater Skins Yamaha team. It came about around two weeks before Hangtown. They asked if I wanted to race and I didn’t have any plans other than Costa Rica, which is only one race a month. I told them I could do it, but I couldn’t’ do all twelve. They were still into it and got me a Yamaha. The team is helping me out so much right now. I’m the only guy on the team that can ride at the moment as my buddy Ryan Breece got injured at Glen Helen. All the attention is on me and I couldn’t ask for anything better. I’ve got a good bike and a great atmosphere. I don’t have anything bad to say about the deal. It was last minute and no one really knew about it. I just showed up with a couple of weeks on the bike and tried to do my best. So far it’s working out pretty good.

You’re one of those guys that can jump on any bike and still get the same results. You’ve been on quite a few different brands lately and it hasn’t affected you.
Yeah, I raced a Honda CRF250R in arenacross and then I had to jump to a KTM 450 SX-F down in Costa Rica. Now I’m on a Yamaha in our outdoor series. I’m putting in the results the best that I can for myself to make a living. It would be nice to have a set bike with a factory team. Or even to have the same setup for a few years, but that’s not my deal right now.

Last year you rode a Husqvarna thanks to Munn Racing and your fans.
I’ve pretty much ridden every brand you can think of.

You’ve been a Yamaha guy for the majority of your pro career, so it’s got to feel good to be back on blue.
When the BLUE Buffalo deal came up I wasn’t worried about jumping on the bike. I kind of knew a setup that I wanted, so I knew what I wanted to start off with. It was pretty easy to get a good feel for it.

You had an off weekend this past week. Did you do anything fun?
I went to the lake and hung out with my wife. We went fishing and nothing else really. We just tried to enjoy the time because I think I have eight more weeks in a row before my next weekend off. The next one that I have off will be before Unadilla, so I’ll be pretty busy coming up.

You might as well throw in a GNCC or go up to Canada for a race too.
[Laughs] You never know.

Those monthly Costa Rican trips wouldn’t be all that bad if you could bring your wife for a mini vacation. Does she get to go with you?
Yeah, she came the last time I went. We toured the city and things like that. She’s coming this next time too, so I think we’ll go site seeing. We’ll try to find some monkeys and take it all in.

Hit up the beach afterwards!
I guess I can’t complain about the way my life is right now. It’s really awesome. Even racing here in America right now. Not many people get to do that for a living. I’m very grateful for what I have and I’ll try to do my best with it.

You’re kind of a shoe-in for the Costa Rican MXoN team right?
[Laughs] Yeah, we’ll have to see.

Are you in talks with any teams for next season yet?
I haven’t talked with any teams for supercross or outdoors yet. My arenacross team, the TiLUBE/Tuf Racing crew, want me to come back next season for them. I would love to do it. I should be finalizing something here in the next couple months. I’d like to give supercross a shot, though. I’d like to run a full outdoor series if I get the chance. I just want what’s best for my career. We’ll have to wait and see.