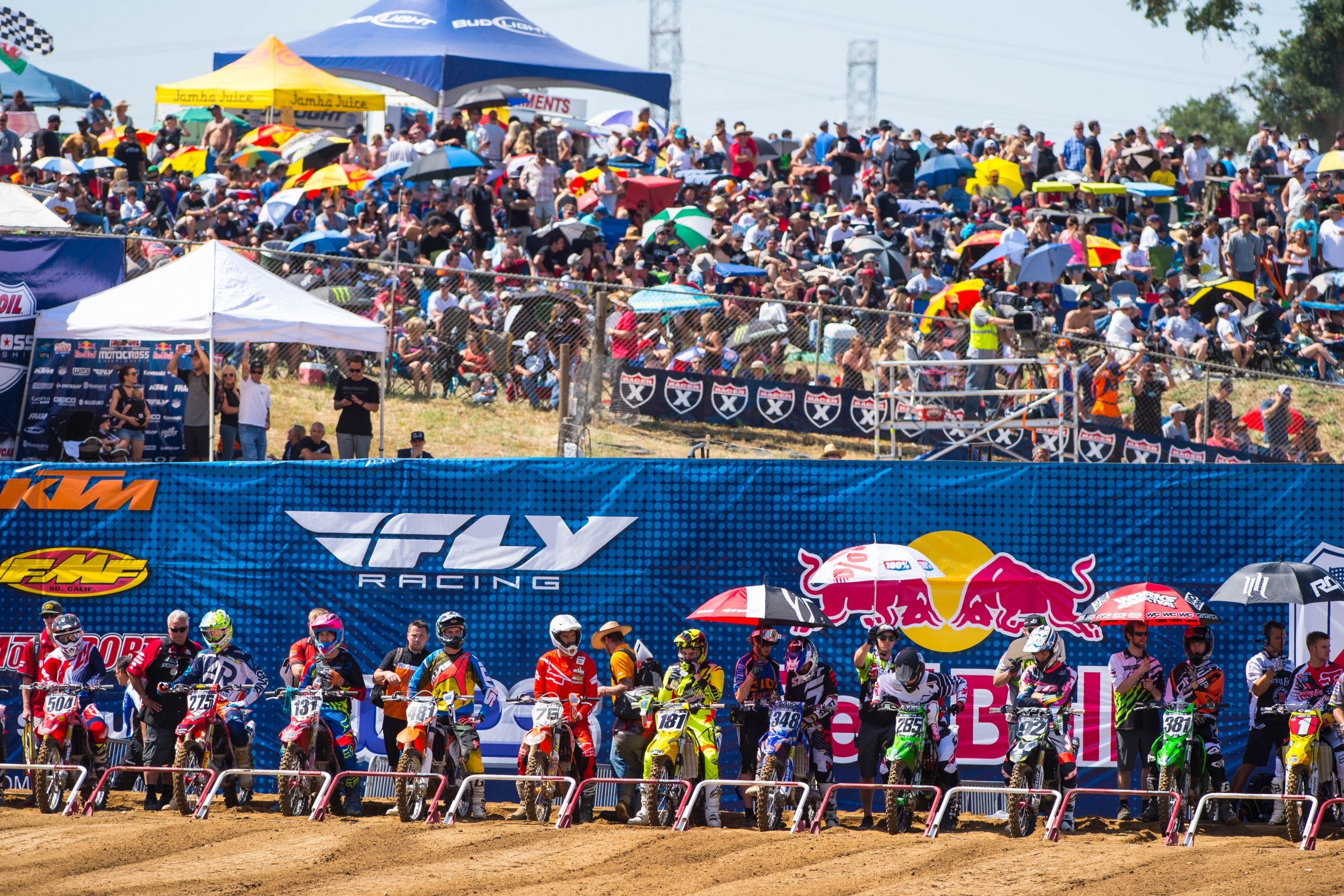 MOTOCROSS IS BACK!!! After a long supercross season, it’s time to take this fight outside. The Lucas Oil Pro Motocross Championship is the premier motocross series on earth (that’s right, Guiseppe, deal with it) and for the past month or two, riders have been working toward this kickoff round in Rancho Cordova, California. The GoPro Motocross Hangtown Classic is set in the shadow of the state’s capital and is the longest running race on the schedule, beginning back in 1969.

David Harvey and The Dirt Diggers do a fantastic job with this event. Their passion for this race is evident throughout the whole weekend. Everywhere you turn there are Dirt Digger volunteers helping fans, giving riders a ride in a golf cart, watering the track, or directing traffic. It’s truly a team effort and refreshing to see.

The track is located at the Prairie City State Vehicular Recreation Area. Say that five times fast. It’s basically an off-road park with all sorts of different riding areas for motorcycles, UTV’s and four-wheel drive vehicles. On the drive in, you can see the rock crawling areas and smaller moto tracks lining the road. It’s definitely a different feel than some of the other tracks on the circuit.

For those of you who attended Hangtown in the 1990s and early 2000s, the transformation of the soil has been incredible. Hangtown was one of, if not the, hardest-packed track on the circuit. Not anymore. Massive amounts of dirt were brought in to soften it up and add traction. It completely changed the feel of the track and more than anything else, improved the level of racing. There are multiple lines and several ruts in each turn. The bumps are not teeth-chattering ledges like they once were. Adding water during the day is actually helpful instead of turning the course into an ice-skating rink. In all seriousness, it turned a mediocre track into a very good one.

With all of that new dirt, Hangtown gets very, very rough. The downhill braking bumps are critical for bike setup and for those who haven’t quite dialed their settings, it will be a long day. The turns are usually pretty straight forward and not of the off-camber type we see on the East Coast. Carrying momentum through the turns and using it to propel you up the next hill is key to success on the winding Hangtown track. The biggest passing spot, however, will be in the braking zones. Whoever can carry speed through the rough stuff and push into the turn will be able to make passes. Not many passes are made in the actual turns at this track. Most riders will tuck behind through the turn and try to slingshot around the lead rider before reaching the next bend. Coming down the long hills, watch for multiple pass attempts here. It will also probably result in some crashes as the proverbial envelope gets pushed to the limit.

The FLY 150 jump was a big hit last year and only a few riders were able to consistently clear it. It is one of the only jumps on the circuit where a 450 is truly tested. To make the downside, the rider has to execute the turn perfectly and even then only the fastest 450’s were making the whole leap. Weston Peick must have cased this jump 15 times over the course of two motos. I also saw Adam Cianciarulo give this jump his best effort in the 250 class but he quickly learned that it simply wasn’t meant to be for the smaller bores. It was significantly faster if jumped cleanly, though, and Eli Tomac seemed to have it perfected. Look for riders to eye this up in qualifying a few times before leaving their throttles rolled on.

The big question I have entering this race is: can Tomac perform at the level he did in 2015? That second moto was quite possibly the fastest I have ever seen anyone ride a dirt bike. He was putting 3-5 seconds a lap into Ryan Dungey and ended with somewhere with a 90-plus second margin. I was standing out on the track watching and caught myself with my mouth open multiple times. I have raced this national a dozen times so I know how it feels to be out there in that environment. I have been inside the top ten multiple times at this event as well (and briefly led in 2004), so the pace is something I can relate to in most cases. Having said that, the pace and intensity that I saw from Tomac in that moto was “next level” and hasn’t been approached before or since.

Some will say, “Carmichael and Stewart were faster.” The problem with that logic is that as bikes improve, so does the attainable level. Carmichael’s 2007 RM-Z450 is nowhere near as potent as a modern day factory 450. Fuel injection, chassis changes, traction control, etc. all play a role in upping the pace. It’s the simple march of technology. I don’t know if Carmichael or Stewart could have gone the pace that Tomac was in that moto given equal equipment. That is impossible to determine. All I am saying is that was the fastest I have ever seen anyone go. People simply don’t put over a minute on this field, let alone a champ like Dungey. If Tomac shows up with that pace again, it’s sayonara to everyone.

Ryan Dungey is your defending champion and just capped off another supercross championship just a few short weeks ago. He hasn’t lost a championship since August of 2014 so to say he is running hot may be understating things a bit. Until someone can come in and forcefully dethrone him, Ryan is the man to beat in this sport.

As mentioned, last year at Hangtown, Eli Tomac put in one of the most impressive rides I have ever witnessed. He has been ramping up in recent weeks with podium supercross finishes, rebuilding his confidence after a rough patch earlier in the year. He should be on everyone’s radar this Saturday.

Ken Roczen is in a much better position than he was one year ago. He entered Hangtown last year with stress fractures in his back and was never really able to ride at the level I am sure he envisioned. He gets his chance at redemption this season and after winning the championship in 2014, he will be aiming to take back what he feels is rightfully his.

Jeremy Martin is the two-time defending champion in the 250 class and comes in as the heavy favorite. He looks poised and ready to reign once again. If anyone can make a legitimate case against that, drop what you’re doing and go to law school because you are gifted.

Joey Savatgy came on strong this year. He gave Cooper Webb all he wanted in the supercross series, taking it to the wire. His runaway victory at the Las Vegas mud bowl was further proof that his program is ready for any variable. He was fast last year at Hangtown but a crash skewed his results. I look for him to be on the podium all summer.

Cooper Webb is dealing with a tough wrist injury and if I am being honest, I don’t expect much from him. I think his season will end prematurely as the pain becomes too problematic. I would love to see him unaffected by his injury and fight for this title but I just don’t see that happening.

Justin Barcia has been a shell of the rider we saw last summer. Keep in mind, though, that this was almost exactly the scenario we saw before he “flipped the switch” at Budds Creek. If he could find a mind eraser for this year’s supercross season, that would be great. Whatever he was doing the second half of last summer is precisely what he needs to do starting this Saturday.

Trey Canard missed a podium in supercross this season and I would have bet mightily against that. Trey is one of those riders that I think can win on any given Saturday. Unfortunately his starts have hurt his chances and with the riders in front of him all on their game, there simply can’t be any weak links. He has nearly double the time to move forward in an outdoor moto but if he can’t find a solution to the start, Dungey and co. will be long gone by halfway.

James Stewart is racing Hangtown but I just can’t think that he is fully ready. I hope he finishes both motos and can build some momentum. He needs continuity and confidence more than anything right now.

Eli Tomac pushes his lead to over a minute and rides his mountain bike for the final lap.

Adam Cianciarulo tweets a few melancholy Blink 182 lyrics before the first moto, then grabs the holeshot.

Cooper Webb rides the first moto with a hook for a hand.

James Stewart has a rough day.