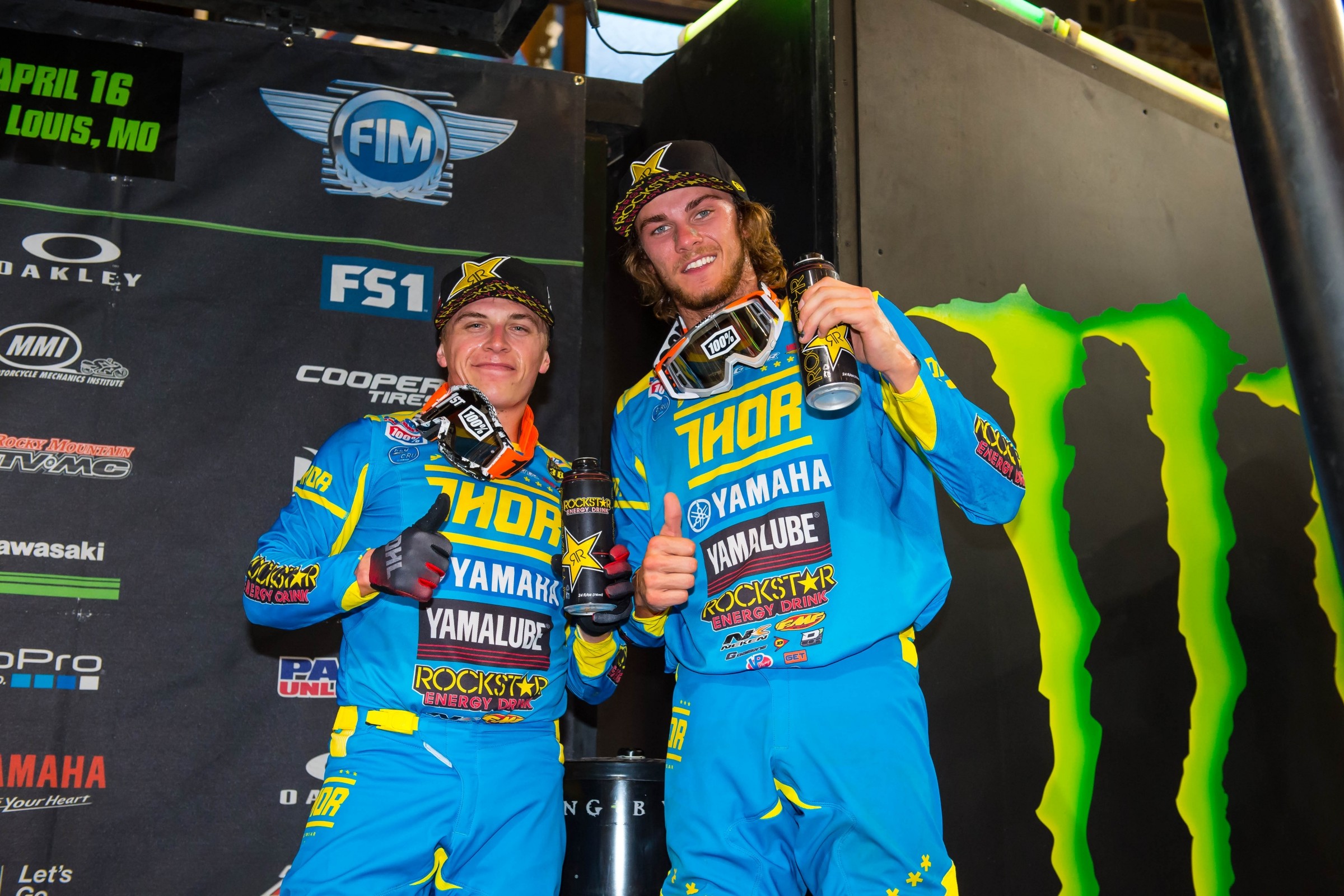 Monster Energy Supercross still runs an East/West Championship format in the 250 class, which leaves most teams putting together four rider units in order to get two riders on each coast.

But when Lucas Oil Pro Motocross starts, you’ve got a true national championship, leaving massive teams with four (or more) riders under the tent at any time. It’s a lot of keep track, of, but we’ve got you covered right here.

Notes: The biggest question mark heading into the opener is Cooper Webb’s broken wrist. A few weeks prior to the Monster Energy Supercross season finale Webb broke his navicular in practice crash. He was able to ride Las Vegas, clinching a second straight West Region Championship, but he didn’t look anywhere near the same rider that dominated the season. Will his wrist will hold up for 24 long motos?

Notes: After garnering 2015 SX and MX Rookie of the Year honors, Plessinger has yet to drop off in 2016. He was in the thick of the 250SX East Region title chase for much of the season and won his first career SX race in Indianapolis. Can he make the same leap outdoors? Something to consider: he went 3-4-4-2-1 over the last five motos in 2015.

Notes: Martin won his first career moto at Budds Creek last year and had two additional podiums en route to seventh in the championship. What really dropped his overall position was five motos of 18th place finish or worse. Last year he rode for CycleTrader.com/Rock River Yamaha, this year he’s on the full-factory Yamalube/Star Racing Yamaha.

Notes: This is Harrison’s first year in Lucas Oil Pro Motocross. He did not race any events after the 2015 Loretta Lynn Amateur National Championship.

Notes: Smith had an up and down rookie 250MX season in 2015. He showed speed (two top five finishes) but also lacked consistency (nine moto finishes of 15th or worse). The story was the same in supercross this season. He’s already re-signed with GEICO Honda, so there won’t be a ton of pressure for a championship this year.

Notes: Hampshire had a more consistent rookie season than Smith, but lacked the consistency to be a weekly threat. He very nearly pulled off a moto podium in Utah before he literally crashed in the final turn while running third. Ten moto finishes outside the top 10 dropped him down the standings. His supercross season was a struggle, but, like Smith, he has also signed a long-term deal with GEICO Honda, which has proven to be patient with talent.

Notes: Craig was the story of the summer last year after coming out of retirement at Thunder Valley and dropping 4-6 moto finishes. He was solid in his first year back in supercross as well. What will he look like with a full off-season to prepare for outdoors? It’s one of the more interesting storylines to watch this year.

Notes: Charboneau has been part of the GEICO Honda amateur squad since late 2014, but the status of his pro debut wasn't quite set until recently. He's been living out in California and riding and training with the team's pro riders, and the squad has been impressed with his recent gains in speed and stamina, so they've decided he's ready to make the jump.

Additional team notes:
Malcolm Stewart announced last week he will skip the Nationals this summer to begin preparations for a full time 450 career in 2017.

Jimmy Decotis was brought on to fill-in for the injured RJ Hampshire (who ended up racing) in Monster Energy Supercross, and wasn’t expected to race outdoors. He’s getting arm pump surgery right now, but depending on his recovery he might show up for a few races. Southwick, anyone?

Notes: Nelson has been out since January after suffering a small crack on the wings of a vertebrae during a testing session. His four podiums last year are evidence of his speed, but will the long supercross layoff leave him rusty, or with a head start on outdoor testing?

Notes: McElrath broke his wrist during the pre-season and was slow off the gate in Monster Energy Supercross. He rebounded with five straight top fives late in the season providing momentum for outdoors. His lone podium last year was at Glen Helen.

Notes: Hill, who missed six rounds of Lucas Oil Pro Motocross last year, has been out of action since sustaining a concussion in qualifying at Detroit in March. Like Nelson, the additional time off will either leave him rusty, or with a leg up on outdoor prep.

Notes: At this time, Oldenburg is only scheduled to race the first few rounds with the team. He had a similar deal last year and ended up staying on all summer. He’ll also stick around if another team rider gets injured.

Notes: Frye turned pro at the Tennessee National, but raced just five rounds due to injury. This is his first year with the team outdoors.

Notes: Osborne is still searching for his first career 250 win in the U.S. He was solid in 2015 with six podiums. Can he finally break through for that first career win? If so his consistency could put him in the points hunt.

Notes: Davalos missed all but four rounds in 2015 due to Epstein-Barr.

Notes: Alldredge will miss at least a portion of the series after fracturing his pelvis at the Monster Energy Supercross season finale in Las Vegas.

Notes: Although he didn’t win a moto last year, Savatgy did claim his first career 250MX overall at Unadilla behind 2-2 moto scores, and his seven podiums were a career high. His Monster Energy Supercross season—three wins and second to Cooper Webb in 250SX West—represented another big leap. How far can he jump outdoors?

Notes: Cianciarulo missed the final six rounds of the series due to a shoulder injury. Prior to his injury, AC scored three moto podium finishes, and his best result, a second, came in his final moto of the year. A broken wrist held him out of supercross this year so once again the former amateur superstar is in comeback mode.

Notes: Tonus raced just one round last year—Washougal—due to illness. He scored a podium in one of the motos there! Now he is returning from a shoulder injury sustained in Monster Energy Supercross that keep him out of the final five rounds. It’s likely make-or-break time for Tonus in the U.S. this summer.

Notes: The six-time Loretta Lynn Amateur National Champion makes his highly anticipated pro debut at Hangtown. Word is he’s showing the speed to match some big named riders during the week, so we’ll see if he can translate that to the races.

Additional team notes:
We’re still waiting for official word from Kawasaki, but Bowers indicated last week on DMXS Radio that the team is going to sit him out for the nationals.

Notes: In his first full season in Lucas Oil Pro Motocross in 2015, Renzland failed to reach the top ten in any moto.

Notes: Nichols torn his ACL at the seventh round of the 2015 250SX East Region and missed the remainder of the season. This season will be his first in Lucas Oil Pro Motocross, but his 250SX West campaign was a big breakthrough, as he took top tens in every round along with a podium and fifth in points.

Notes: The former MX2 Champion in Australia is returning from a broken femur sustained in Monster Energy Supercross. Hangtown will mark his first outdoor race in Pro Motocross.

Notes: Cunningham returns to the 250 Class after racing 450MX with help from SmarTop/MotoConcepts last year.

Notes: Alberston missed all of last year after undergoing double shoulder surgery after supercross. His last race outdoors on a 250 was Hangtown 2007. Jimmy is generally more comfortable outdoors than in supercross.

Notes: Osby finished fifth and thirteenth respectively in 450A and 250A at Loretta Lynn’s in 2015. He was supposed to make his pro debut in 250SX East Region but was injured. He will return for the nationals.

Additional team notes:
In April, the team and Mark Worth parted ways so that he could return to amateur racing this year. Worth sustained a dislocated and fractured elbow, and a dislocated hip at the supercross season opener in practice.

Notes: The Oklahoma native enters his full year in Lucas Oil Pro Motocross. He raced the two rounds of the series after Loretta Lynn’s in 2015.

Additional team notes:
The team is currently only expected to race the first three rounds of the series.

Notes: A-Rod missed all but three rounds of the 2015 Pro Motocross season due to injury. He went 7-6 at Hangtown last year. His supercross season was steady but not spectacular, with a season-best of sixth.

Notes: Audette raced seven rounds of the championship last year under his own effort. After filling-in at Monster Energy/Pro Circuit Kawasaki in supercross, Audette moves over to Traders Racing Kawasaki for outdoors.

Notes: Gaines is still recovering from a broken femur sustained this off-season. The hope is to return no later than High Point.

Additional team notes:
Justin Starling was signed to a supercross only contract and will not race the nationals with the team.