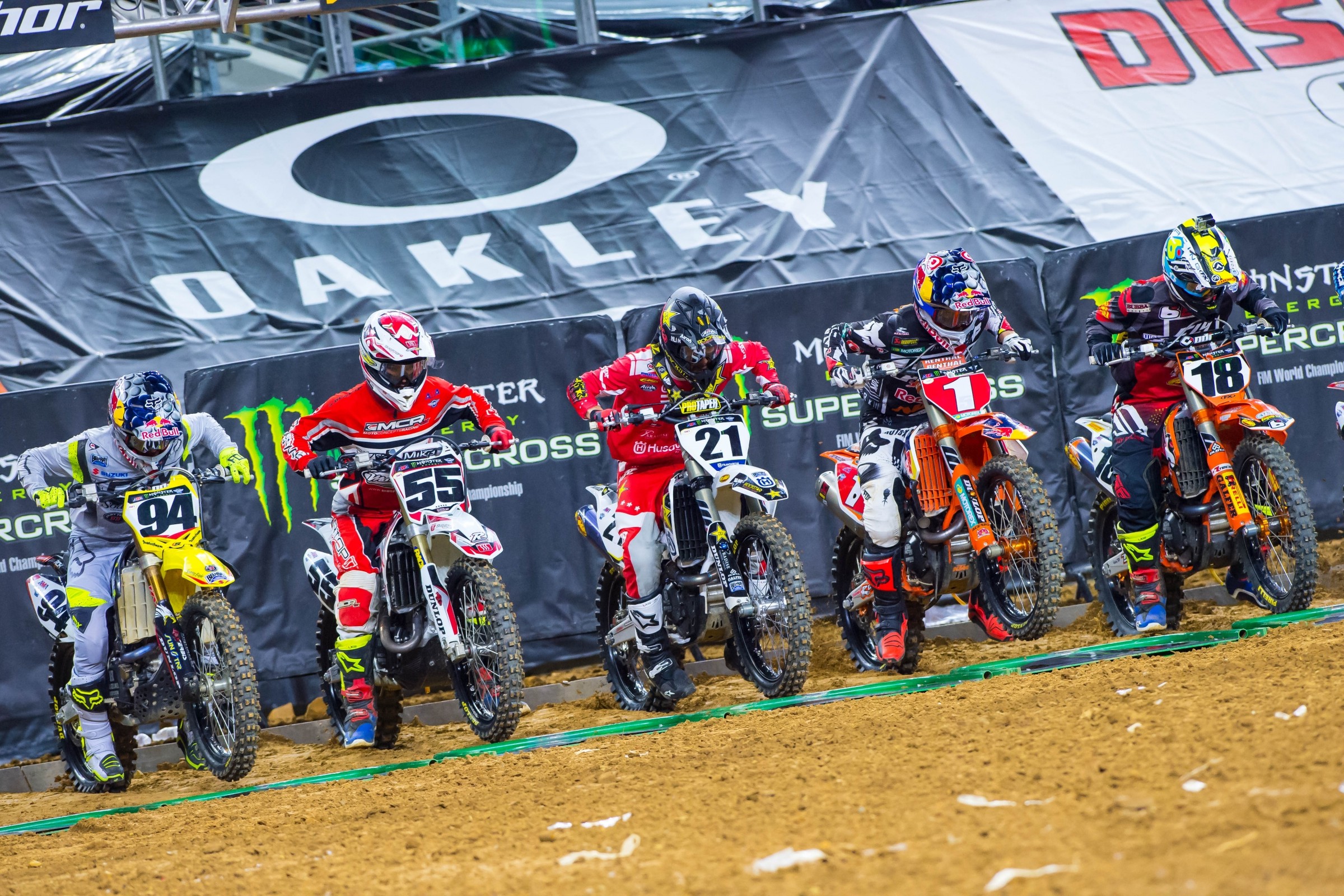 I went down to the floor to watch the main events at MetLife Stadium. Normally I watch from the press box, but the NJSX held the potential for Ryan Dungey to clinch another Monster Energy Supercross Championship, and I wanted to see the immediate reaction of Ryan and his crew. I was also able to catch Malcolm Stewart as soon as he captured a clutch victory. I was there to watch the winners and see their emotions—but I ended up seeing something from everyone.

As Malcolm rolled away from Martin (Davalos) and (Jeremy) Martin, it was pretty clear he would win, so I turned my attention to the 450SX riders who were waiting to load into the starting gates. Most were corralled into one small area behind a fence, but Dungey stood on his own, still trying to pick up as much action from the 250 race as possible. Finally the start opened up, and mechanics began to push bikes and look over gates, with their riders soon filing in behind them. All over, there were things to note. Ken Roczen went out of his way to find Justin Bogle. Earlier, in their heat race, Ken had put the mildest of block passes on Bogle to take the lead—but Ken wanted to make absolutely sure there were no hard feelings. Eli Tomac turned his normal icy stare toward the start gates, trying to find something that would work after being relegated to the semis, and the 13th gate pick. Chad Reed had some experienced hands scouting his turf, like mechanic Mike “Goose” Gosselaar, and super bud Michael Byrne. On it went, each rider someone very capable—Dungey, Jason Anderson, Marvin Musquin, Trey Canard, Blake Baggett, Justin Barcia, Cole Seely….

It’s true that of everyone on that line, only Dungey, Roczen, Tomac and Anderson had won races this year. Maybe only those guys and a few others had a realistic shot at winning on this night. But every one of the riders I watched survey that start has been a really bad dude, maybe the baddest on the track, at some time in their career.

Just as an example, I watched Musquin load in and remembered him dominating 250SX East Region a year ago and clinching a championship. Before that, he was a fast man out of France, and a two-time MX2 World Champion. Two months ago, he held Dungey at bay for 19 laps in the Georgia Dome. He is absolutely one of the most skilled dirt bike pilots in the world, and he came from halfway around it to have a shot to win the race on this night.

Roczen came from slightly farther, if you’re gauging it by a map. Kenny was das Wunderkind in Germany, so destined for global greatness that he even made it over here to race Loretta Lynn’s once, before most people in the U.S. had heard of him. He won a GP at age 15, he could have been the heir apparent to MX1 success had he stayed home. He is instead on the supercross starting gate, still talented, still on the right path with focus and hard work. He’s great and he would end up dominating the race that night. But he’s far from the only rider on that gate filled with greatness.

They all are. Blake Baggett isn’t the first person on fans’ mind when it comes to 450SX, but he’s still the man who became El Chupacabra, and terrorized 250 National Motocross for a few seasons, with come-from-behind charges, speed, intensity and endurance that rank as high on my list of impressive rides as anything I’ve seen from anyone else. At his zenith in that class outdoors, he did things no one should be able to do. While he did it, he had to battle riders like Tomac and Barcia. They too have done amazing things on dirt bikes.

Barcia crushed people as an amateur—literally and figuratively. He was fast immediately as a pro, he won two 250SX titles, he won immediately when he jumped on a 450 in supercross. He has amazing talent and he works very hard. Like, very, very hard. Part of his recent frustration is because he’s putting in the sweat and not leaving anything on the table, but he’s still not winning like he wants to. He has talent. He works hard. It should be everything but it’s freaking hard against this field. Tomac? Same thing. Just aces, winning since a young age, winning as soon as he turned pro, winning indoors and out, winning, winning, winning. What Eli Tomac did during those first five and three-quarter motos outdoors last year will forever live in motocross lore. Was that the fastest anyone has ever gone around a motocross track? That’s one heck of a claim to have on your racing resume. Eli is a bad dude.

Jason Anderson came through the ranks around the same time as Eli—they’re about the same age, and Tomac’s Colorado home is closer to Anderson’s home state of New Mexico than it is to Lakewood, Colorado, the site of the track we all think of as home for Tomac. Anderson has carried a lot of hype for a long time. None other than seven-time AMA National Champion Rick Johnson once told me Anderson has the qualities to be the perfect racer—smooth and skilled like David Bailey, but a hammerhead and aggressive like Johnson himself, all wrapped into one package. A lot of different brands and teams saw that talent in his younger years, like Suzuki, KTM and Kawasaki, and now his Rockstar Energy Husqvarna people won’t even let go of him, and vice-versa. Anderson is a super talent, but also now operates under the super training program of Aldon Baker. He, like the rest of these guys on the gate, is all in.

Keep going. Jake Weimer might have entered journeyman status at this point of his career, but he won a 250SX West Region title, he raced for Team USA at the Motocross of Nations, he’s been on the podium in the big bike class. Nick Wey is a journeyman now, too, but he was once a Team Green hotshot, and a legend for anyone who watched him growing up in Michigan—as was Weimer for anyone in Idaho.

Team Honda was once the strongest force in this sport. Team manager Dan Betley was there in those glory years, wrenching for Jeff Stanton en route to three AMA Supercross Championships. Betley oversees two riders of considerable supercross talent, both whom have main event wins on their resume. Canard is right there with anyone on earth in speed, and he has those resume’ bullets, too—250 titles indoors and out, and 450 race wins head-to-head against the baddest men on the track. At some point, Trey has held, off, passed or beaten every one of his peers. GEICO Honda once rebuilt its program with a revolutionary plan of hiring amateurs as pros, and it kicked off a sea change in this sport that nearly every brand now follows. Trey Canard was the leader of that movement.

Alongside him is Cole Seely, who has a lot of industry insiders speaking highly of his talent and skill. Some wonder if he has the grit to get to the pinnacle, but on this night, with just over a week on a motorcycle after breaking vertebrae, he held back the advances of none other than Dungey to secure a podium spot, ending Dungey’s all-time podium streak. When he came off the track, winded, exhausted, in pain, Betley ran up to him and screamed, “Look at the heart on this guy!”

Who else should we gush on? Chad Reed? Please. It would take this column and three more to list what he’s done, as impressive a career as anyone to ever swing a leg over. Mike Alessi is now a rider just trying to achieve top tens, but he needs no introduction. There was a time during his amateur run when Mike seemed poised to take this sport over as a pro. He hasn’t, but it wasn’t from lack of trying.

And then there’s Dungey. So many great riders, yet he’s found an even higher level.

For any of these guys, the force that determines success is usually measured by his own merits. Talented enough? Trained hard enough? Bike good enough? But we often take for granted that this level is the highest level, and we’re not talking about a league with 30 teams and 30-ish players on each, but one starting gate per week with twenty-two riders, total, forty come Hangtown. The real force that determines a rider’s success at this level is the force of his competition. Everyone on that gate is a bad dude, a super talent, a hard worker and a 99.99999 percenter. We see them race so often that we sometimes forget that. The next time you get a chance to glance at one of those starting lines, think about how much force is behind it, and how much is about to be unleashed in front of it. It’s awe-inspiring stuff, and while that much competition leaves some short of the accomplishments they want, it actually highlights just how accomplished everyone on that gate really is.