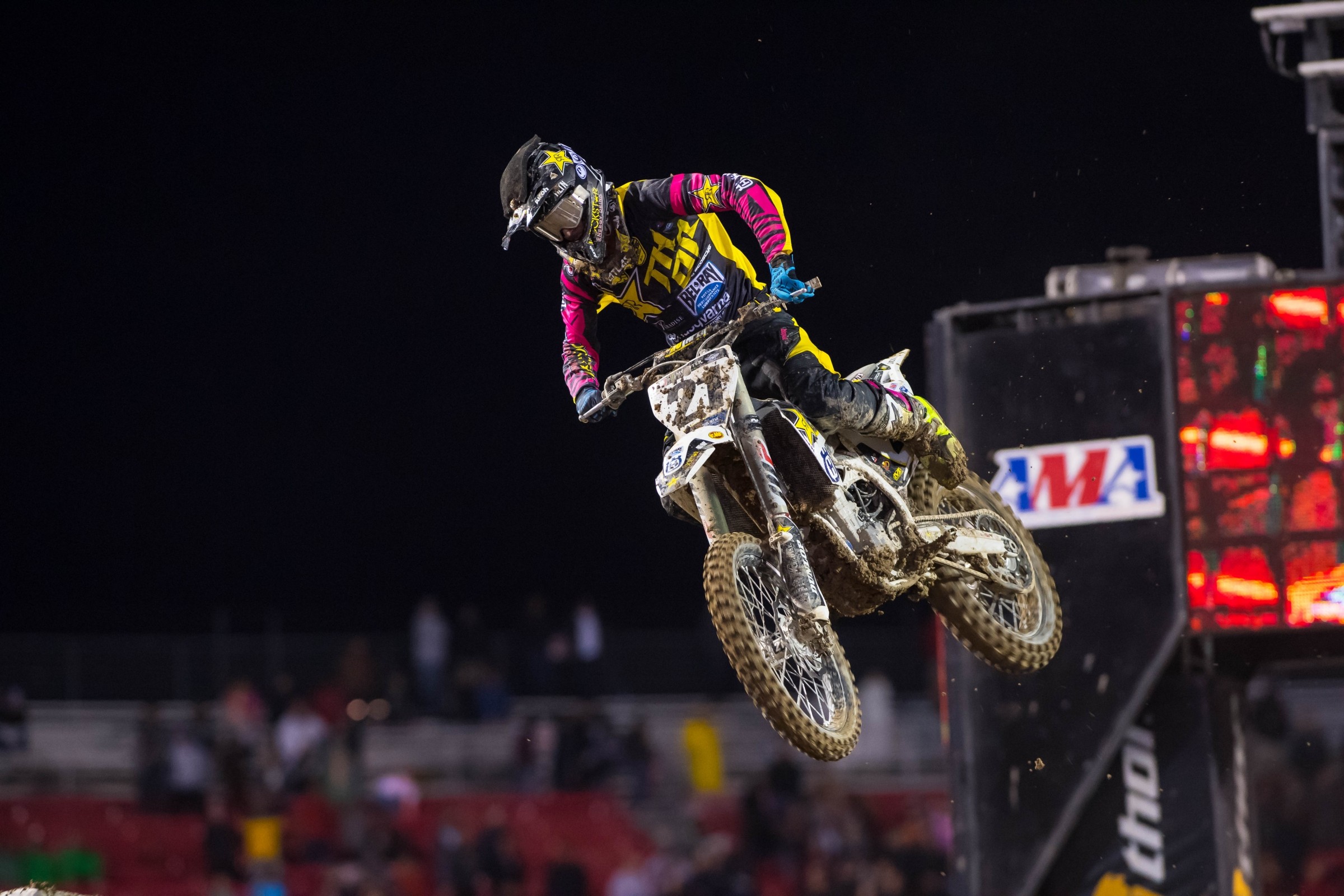 I felt good. That track was all about the start. Once I got out there I got passed by Kenny [Roczen]. We didn’t do a hot lap so I was kind of nervous about what the lines were out there. I kind of just took the first few laps and I just kind of wanted to survive to be honest. I was like, make it out of Vegas. We’ve got an outdoor season. But to do it how I did, I felt like I was catching Ryan [Dungey] a little bit there for a minute but it is easy to lose time and easy to make up time. It was very squirrelly out there but we made due.

Do you do some mud practices once in a while? Is that what Dungey was saying? If it rains you guys go out and ride a little bit?
Dungey is always the one that wants to suit up and ride. If it’s muddy I’m thinking, “We’re going to have to sit on the couch today.”

Have you done it? Will you go out there and do it?
If he’s out there, I’m doing it. I can’t be the one left out!

So you’ve logged some actual mud motos or rain motos?
It’s not as muddy as this but it’s definitely not dry. It’s tough to ride. So I definitely feel me and him make a good little team. He definitely pushes me at times when there’s not very much fun in it. But that’s what we got to do. To enjoy the good days we have to get through the bad days.

Where would you rate this on a difficulty level? It had to be one of the hardest ones you’ve probably ever done.
As far as getting tired and stuff like that, it wasn’t that hard at all. But mentally you’re just like landing in ruts and you have to focus on the whoops section. That whoop section was tricky. Making it through that was tough.

How about your season? You have to be pumped on how it went overall. This is a nice step from last year.
Fifteen top fives and seventeen top tens, so it’s been great.

A couple wins too.
It’s been great. It was my goal. Being on the podium was cool but I want to win more races. That one tonight I was like, I want to win it, but then at the same time I didn’t want to go for it and blow it. I just wanted to make it through and get to outdoors and see if we can do damage out there and also have a good time in Vegas tonight.

Did you have any outdoor testing so far?
We’ve been riding more outdoors than supercross lately. This week we rode two days of outdoors and one day of supercross. So we’ve been getting ready. You don’t really lose it whenever you ride outdoors. It probably helps you for supercross, but it’s already 90 degrees and humid in Florida and we’re doing two 35’s. We’re back to work on Monday for sure. We’ll see how it goes.

Racer X: What happened the last lap? We saw Reed coming close and then I saw the finish line and he was ahead.
Blake Baggett: Speedy Reedy might be old, compared to me. He is old compared to me, but don’t let him fool you. He’s still fast. He was hunting and I don’t know if the blue flags were blue for everybody tonight. I don’t know if they saw them. Maybe because of the mud they didn’t see them? That’s the excuse. They were blinded because they couldn't see because of the mud! Anyway, they didn’t see the blue flags. I got in some situations that definitely weren’t ideal and I lost quite a bit of time. And then me and Reedy had a little battle. He missed the triple the last lap and I did it, then he dove down the inside and had the wisdom put it to me in the turn. It was good racing—it was just so muddy.

Nothing dirty or anything?
Nope, he went in for it. He went to capitalize on it and I was smart enough to give him a little room.

Are you happy with the riding though?
Yeah, I think I was third from last into the first turn. Over the little jump out here I think I was fourth from last. So, yeah, solid. I was way back there.

So you passed sixteen guys? Did you pass one at a time or were there bunches of people?
One at a time, bunches, people on, people off the track, people on the ground.

Feeling good?
I felt pretty good. But you know how it is here. We’re outdoors and there’s no roof on this stadium, dealing with the weather…you know what’s coming.

Oh well, yes, so tell us what is coming. Where’s the hype level on this—outdoors starting in two weeks.
It’s about time.

Where are you compared to last year at this time?
Way ahead on the scale. It’s been a while. Last year was kind of like the groundhog never came out, he just kind of hid all year.

It’s true. We never saw you really uncork it. Will there be some uncorking?
I think it’s time. I think there’s been a lot of hibernation and it needs to come out again.

How about that heat race crash? You tucked the front in your heat.
It’s just chaos, dude.

Okay, but we’re sensing you’re getting pumped with the nationals around the corner. So something’s happening here?
You tell me. I’m just feeding you the information I got. You do whatever you want with it.

Racer X: There was some mojo going tonight. Heat race mojo. You were riding fast in the main, except for some problems. It was good.
Justin Bogle: Yeah, tonight was good. I’m not disappointed at all. I’m happy with how I rode. First heat race win, that was nice to get that under the belt. Come into the main event, got a great start. I bumped somebody and knocked my clutch lever down. I’m coming through and I started sliding. I couldn't slow down and I fully squirreled out off the side of the track. Then ended up coming in together with somebody else first lap and then I’m back in like 16th. Just put my head down. I was having a lot of fun. Riding very well, I felt. Ended up coming back to seventh or eighth, still moving forward, and then ended up having a crash. It’s all good.

You got knocked down. Did you hear or see any bikes coming? You thought you were clear?
I made a pass on [Josh] Grant—clean pass through the whoops. I was quite a bit faster than him. He wasn’t very close. He definitely didn’t even make an attempt to make the corner, which was a little uncalled for considering where we were at and where we are in the series and everything. It was kind of really stupid, but whatever. It is what it is.

Have you thought of yourself as a mud rider up until now? Was that always a thing for you ever?
Not really. When I was in amateurs I was good in the mud and I’ve been pretty garbage in the mud as a 250 rider. But I did win a supercross win in New Jersey in the rain. It’s been there but I had a couple bad races, I guess I’d say. But I’ve always enjoyed the mud.

What is the Oklahoma red clay like when it rains? Is it exceptionally bad, gnarly?
It’s exceptionally good! So much fun. We had a day a few weeks back it rained like it was raining here. We were doing motos in it and it was one of the most fun days I’ve ever hard. It was cool. It might have helped because my boy was Colt Nichols was leading multiple laps until he went down. I was in the track screaming when he was coming by.

He rode in the rain that day too?
Oh yeah.

Racer X: How was it?
Colt Nichols: Absolutely brutal. It was honestly really, really fun. I had a good time. Not really the typical Vegas anybody thought it’d be, but overall it was a really good time. I was bummed I crashed. I actually got into the lead for a little bit. Joey [Savatgy] passed me back. I was running in second then made a dumb mistake, just tipped over. It was just survival of the fittest out there. Overall good night. I’m glad we ended up the way we did. It was good, and now we’ll get ready for outdoors.