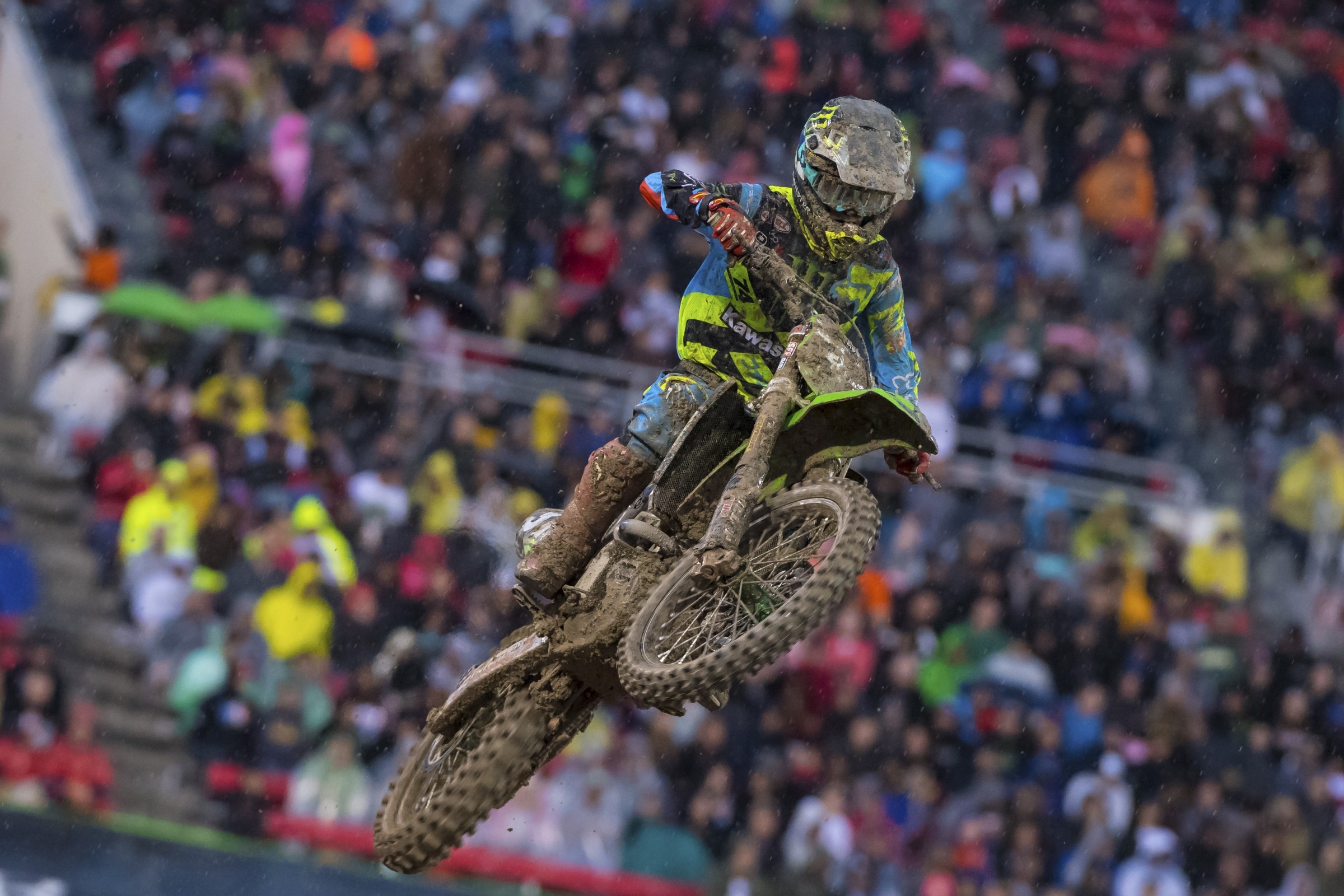 Joey Savatgy absolutely had to win the Dave Coombs Sr. East/West Shootout to give himself the best possible chance to win the 250SX West Region Championship. He did just that. Delivering in the clutch, especially under rugged track conditions where anything can happen, isn’t easy, but unfortunately Joey’s big ride got overshadowed by the championship runs for Malcolm Stewart and Cooper Webb. Sorry, Joey.

On the other end, Ryan Dungey didn’t need to even show up in Las Vegas since he had already won the 450SX title the week prior, but we’ve seen time and time again this year, maybe up until last weekend in New Jersey, that Dungey races to win regardless of the points. He admitted that mud riding isn’t always a strength for him, but he went for it anyway—and so did Ken Roczen. They got into a big duel that ended when Roczen crashed and took them both down. Title was decided, but they wanted to win badly anyway.

“When Kenny did that dive, I saw it,” said Dungey. “I thought he was going to save it and just bounce the front, but it tucked and it went. And then the bike came to the right, which that’s where I was going. I was already committed. So I hit that. It kind of hurt a little bit, man. Thankfully the bike stayed running. I picked it up, took off, and everything was fine. I was able to remount in the lead, so that was cool. From there Jason [Anderson] was putting a little bit of pressure on and I was just trying to stay steady and not make any mistakes. The lappers were tough as soon as we approached them because there was that one good line and we were all taking it. So when we got up on some lappers the last five laps I was able to find a couple different lines which really worked out for me.”

Dungey leaves no stone unturned these days, and he’s been getting on his fellow troops at the Baker’s Factory to get out there in the rain for mud practice.

“[When it’s muddy] Dungey is always the one that wants to suit up and ride,” said Anderson. “If it’s muddy I’m thinking, we’re going to have to sit on the couch today. But if he’s out there, I’m doing it. I can’t be the one left out.”

“Mud doesn’t come easy to me, either,” said Dungey. “We’ve been working in it. We’ve been riding in it more the last couple years of my career because I know it’s a weakness of mine. But it was cool to be able to win a mud race. It’s been a while.”

It helps that Dungey always gets good starts, which is even more important in a mudder. Not only is roost a problem, but muddy tracks usually turn one lined. That actually made it extra tough once Dungey got to lappers.

“I think the best thing for us was to get a good start like we did,” Dungey told us. “That really helped us out a lot. Just being able to have that clear track in the beginning was key. If you were buried in tenth that would have been tough and you would have lost a lot of time on the leaders and stuff. So that was helpful and then just being able to maintain. But like I said, the lappers were tough. It is what it is. Mud’s tough on a lot of guys and you catch lappers quicker than you’d expect.”

In the 250s, Savatgy also nailed the start. He had a little fight with Colt Nichols, who briefly took the lead, but he responded and then Nichols went down. From there, all of his focus was on title rival Webb, who was way back. In fact at one point it appeared he might lap him.

“Yeah, I didn’t even really know that I was catching him,” said Savatgy, who lapped up to 13th place, with Webb finishing 11th. “I didn’t know where he was. My mechanic was letting me know P12, P11, P12. I knew he needed 14th so we came up a little short but I did everything I could do and I won the race.

“It was kind of just like riding around, to be honest,” he continued. “For a while there Nichols and I were battling, and then he went away. My mechanic wasn’t telling me the gap [to second], just where Cooper was. I didn’t even know where anyone was and then I kind of figured it out. I looked over at the lap board and saw where everyone was. I was like, all right, I got to bring it home.”

Savatgy comes up short of the title but can take some solace in his progression this season. Until now he had not won a 250SX main, but he scored three victories this season, and even though he did it in a crazy, muddy race, a Shootout win at least gives him some bragging rights.

“It wasn’t the most ideal situation but at the end of the night we won and that’s what it’s all about,” he said. “I work hard during the week and I worked hard all year. So to end the season like this and to bring it home for the West Coast, they say the West Coast is the best coast. We were fast in the dry and we got it done in the wet, so all in all I’m pumped. I’m disappointed and it hurts that we lost the title by only two points but in the same breath we ended the year very strong and made a statement for next year. I’ll be here next year battling for another title.”