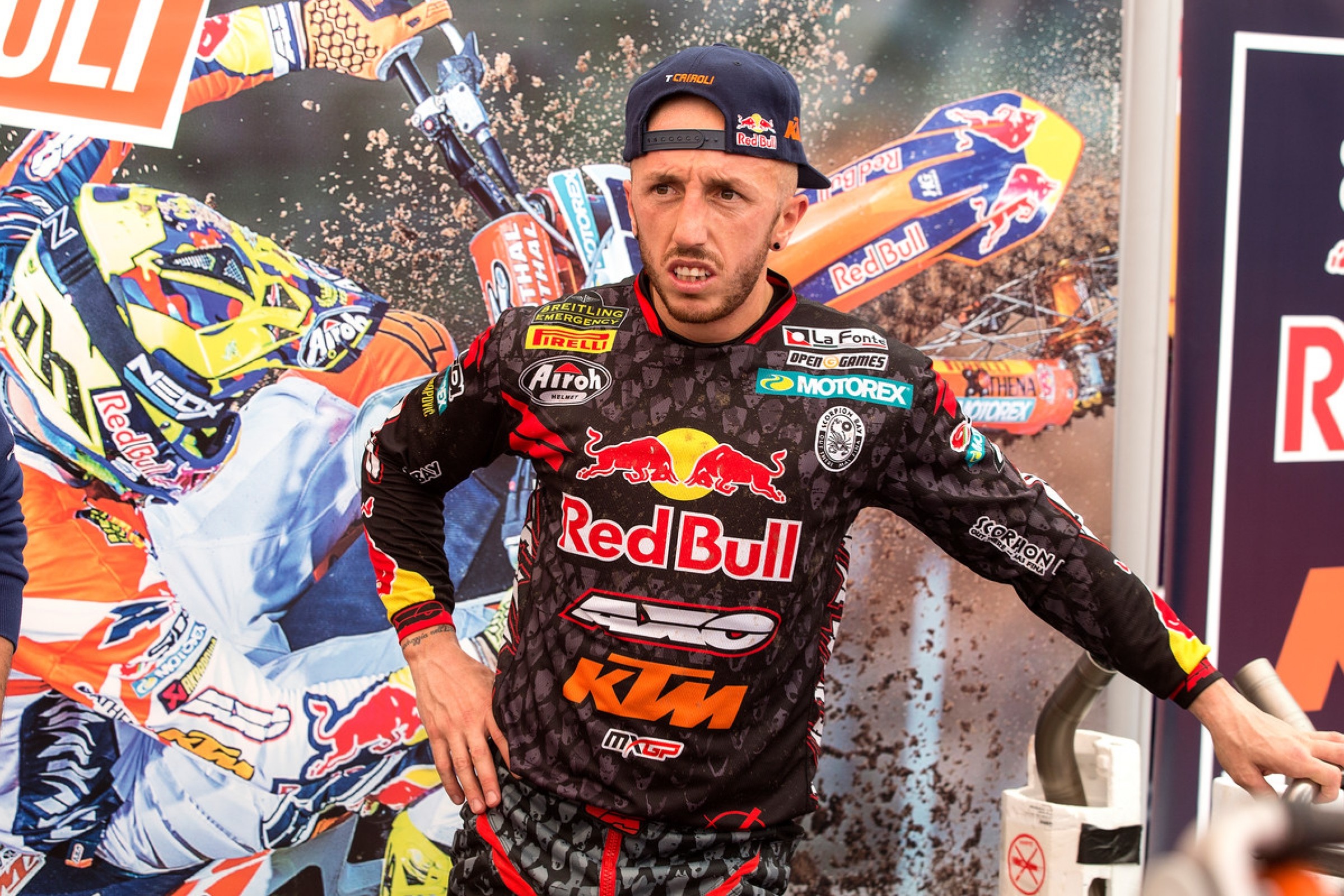 A Red Bull KTM double through the sea of ruts at Teutschenthal could mean only one thing: Tony Cairoli has found some mojo. Almost a full calendar year after his last victory, the 30-year-old Sicilian was triumphant across an usually technical and slower Teutschenthal layout that benefitted from extra preparation, the addition of a sandy section and some other modifications in an attempt to lower speed around the narrow hard-pack. Winning the Qualification Heat from Honda Gariboldi’s Tim Gajser was a promising start but the 450SX-F rider—on a weekend where brand mate Ryan Dungey won his ninth Monster Energy AMA Supercross—admitted that he was able to count on tests with some new prototype parts on the race bike then made two excellent starts to dash clear of threats in both motos. Cairoli claimed on Saturday that nerve damage as a consequence of his pre-season injury meant he was still missing strength and full race fitness but the eight times world champion handled the seventh round of MXGP perfectly.

“My condition is getting better but my starts were so good and the changes and new parts we have from Austria means that the bike is amazing,” he said. “We have improved a lot and this is not the most perfect bike I’ve had until now but it is close.

“I’m really happy,” he added. “[Before] It was difficult when someone passed you and you could not respond and inside you knew you could do better. From now on I think I can be better every weekend because this shoulder and muscle problem I had was the worse [injury] for me.”

MX2 was owned (naturally) by Cairoli’s teammate Jeffrey Herlings as the Dutchman is now seven rounds and fourteen motos unbeaten, and with a total of 350 points is 80 ahead of impressive Team Suzuki World MX2’s Jeremy Seewer who was a lap and a half from ending Herlings’ moto streak. The Swiss rider has been a part of the last six podium celebrations in the class.

Sunshine was prevalent at Teutschenthal for what was a good event and an improvement over 2015 where the racing course attracted criticism for the lack of prep and the local club were pretty much told to shape-up or ship-out. Even though there was a distinctly early summer feeling on arrival to such a well-established stop on the MXGP trail, Germany saw some unusually bad-tempered and petty behaviour; some pockets of tension already starting to emerge in the second third of the calendar.

On Saturday Gajser and Monster Energy Yamaha’s Romain Febvre got in each other’s faces after the finish line, remonstrating about the validity of some of their moves (Febvre citing Gajser’s line taking at the start and the Slovenian accusing the Frenchman of some aggressive riding). On Sunday and before the first moto some gate gamesmanship saw Febrve and teammate Jeremy Van Horebeek in a bizarre altercation that left the Belgian allegedly calling out the world champion. On the first lap Van Horebeek clearly hit the other Yamaha and put Febvre on the ground, creating a rift and a messy situation for the championship winning team. Van Horebeek would later have his own scary accident in the second moto. After clipping Monster Energy DRT Kawasaki’s Tommy Searle when the Brit seemed to miss a gear in the first race, Febvre had to pull back through from last to tenth place and found some stiff resistance from HRC’s Evgeny Bobryshev in the fight for second spot in the second race. The champion ate roost and received a split lip for efforts to pass the Russian but could not snatch second position and ended a turbulent Grand Prix in fifth overall, behind Rockstar Energy IceOne Husqvarna’s Max Nagl, who was battling a stomach sickness.

Also not sharing the love was Herlings. The former champion accused both Monster Energy Kawasaki’s Dylan Ferrandis (second overall) and Seewer (third) of dirty riding in the post-race press conference, and even while sat next to his peers! Herlings had been struggling with illness in the build-up to the event and was at his weakest point this season. He needed almost the whole second moto to pass Seewer and move up from fifth place and then could barely walk to the podium through dizziness. Ferrandis, who himself is still searching for full race fitness after missing two months of Grand Prix action, ignored Herlings’ protest. Ferrandis also confirmed his move to Yamalube/Star Racing Yamaha for 2017, but didn’t know whether he would be riding the East or West Region. Seewer was visibly surprised and defended his actions on the first lap of the second moto when Herlings claimed the 21-year-old cut his line.

“It was a tough race and they made it even tougher for me,” Herlings explained. “Dylan likes to cut me off at the start, that's a normal thing I guess and he did it in the second one so I had a really bad start. On the first lap coming to the triple I had to close off because Jeremy cut me off as well. I landed short and have a really bruised ankle. I’ve had some really big injuries and hopefully they will play more safe [sic] and beat me fair and square and stop playing dirty. I have a lot of respect for Dylan and for Jeremy so let’s just race clean. I hope we will do that and not be cutting each other off on the start straight. I haven’t done anything bad to them so I hope they won’t do it to me.”

Seewer seemed shocked and some foul play would certainly be out of character. “It was amazing to be up front. In the last few races Jeffrey has been really dominating and this weekend he was not really fit so there was a small opportunity to grab and I have to say from my side there was nothing bad that I did. It was just racing and I did nothing on purpose; I also don't want to start a fight or anything. I am just focussed on myself.”

Herlings’ superiority is such in MX2 that he does not need to accumulate any pressure and is more than experienced in leading—and bringing home—a championship. He will have to learn further about being a target in the class and for any rival to make his job as difficult as possible. With two more hard-pack Grands Prix to come it will be curious to see how the dynamic plays out as the trio—along with Rockstar Husqvarna’s Max Anstie who tossed away a second moto lead after a cross-rut—will interact once more.

Back in MXGP Tim Gajser was second overall and the 19-year-old was again the real deal; gunning the works CRF450RW over some of the berms and through the ruts with such power and poise that he seems to be growing in stature and confidence every time the gate falls. He was unlucky to see his line co-join with that of Bobryshev’s in the second moto by the pit lane in a Honda scrap for second that saw him quickly down into the German soil and ended any chance of closing to Cairoli. There can be little doubt that Gajser is one of the eminent 450 riders on the international stage at this point. There was already talk in Germany of where Gajser will be riding for 2017 (Grands Prix or USA as he has a multi year Honda contract) and his presence demonstrated the strength of a class that still needs to see athletes like Gautier Paulin (expected back in Italy this weekend) and Clement Desalle (struggling from his accident last week in Latvia and withdrew from practice and the GP in Germany) enter the fray. The likes of former European Champions Christophe Charlier (finally fully fit on the works Husky and riding to a career-best fourth in the first moto but was taken down on the start of the second) and Kemea Yamaha’s Valentin Guillod—the Swiss MXGP rookie taking fifth in moto two—show there is depth and potentially more names in the frame.

There was some controversy in WMX. Courtney Duncan came into the meeting nursing an injured thumb but while leading the first race on Saturday pulled to the left over a jump and clipped a photographer; the impact sent her tumbling down the hillside. A painful ankle (later confirmed as a fracture) meant the Qatar GP winner and series leader could barely walk when she left the facility Saturday evening. Understandably there was some concern and discussion about the incident amongst the FIM and Youthstream. Reprimands were issued, warnings were given (and rightly so) but it was Duncan who lost out the most as her aspirations of the title on her maiden Grand Prix tilt gathered considerable dust in the aftermath of the German mess. The New Zealander has four weeks to recover before the fourth round of seven. With the Yamaha rider out of the picture it was Livia Lancelot—herself dealing with a rib injury—who triumphed.

The third round of Grand Prix’s direct feeder series saw a display of poise and style from Australia’s next big hope; Monster Energy Kawasaki’s Hunter Lawrence. The teenager rode to a commanding 1-1 at Teutschenthal and had Darian Sanayei for company on the podium—the American taking his second consecutive rostrum finish in EMX250.

Arco di Trento—Ryan Villopoto’s last hunting ground—will mean the second rough, hard-packed test for MXGP in a row and the end of a busy spell on the calendar that has taken the championship from the north to the south of Europe.