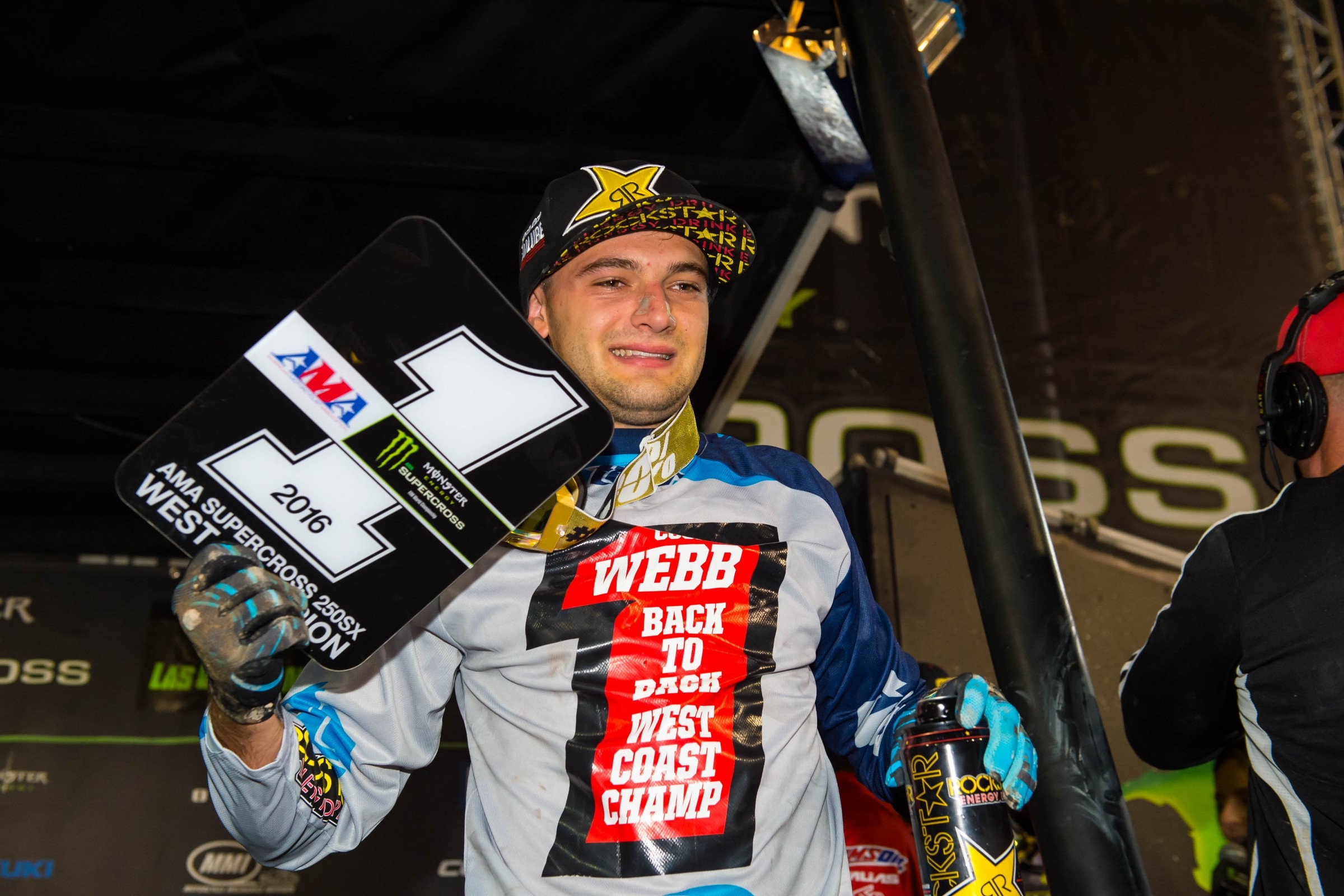 For all the bluster, brashness and bravado we’ve seen from Cooper Webb the last few years, we didn’t see any of that when the checkers flew after the Dave Coombs Sr. East/West Shootout. Webb had just won a title, but he had been through hell trying to hold onto it. First, he was riding with a broken navicular, which is a small bone in the wrist that usually wreaks havoc on motocross racers.

The navicular is a nagging injury that takes forever to heal, and often requires surgery to fix. He had not even ridden since breaking it almost three weeks ago, and he would have to gut this out through pain and whatever rust had built over the weeks. Then it started to rain, and by the time that was done, he was dealing with a muddy track that several 250SX riders described as the worst they’d seen in their entire lives.

Then Webb crashed off the start and landed right on that bad wrist. He was hurt and nearly last, and the man who could upset him for the title, Joey Savatgy, was in the lead.

This wasn’t one to celebrate; it was one to just get it over with.

“It wasn’t looking good,” he told us before being summoned to the podium for the team victory photo. “I got a good enough start and then it went bad quick. I crashed back here in the first turn. Unfortunately I landed right on my wrist. That was a bummer but I did what I had to do. I didn’t ride that good, but it is what it is. I did what I needed to do.”

Did what he needed to do. That was pretty much all Cooper could summon up. No trash talk, no bravado. This wasn’t excitement; this was pure relief.

It wasn’t supposed to be anything like this. Cooper ripped off three-straight victories to start the year and terms like “perfect season” and “sweep” started to develop in the background. Then his bike shut off while he was leading round four in Oakland, he scored just one point, and the title battle that wasn’t expected to be a battle became a battle. Credit to Monster Energy/Pro Circuit Kawasaki’s Joey Savatgy and GEICO Honda’s Christian Craig for making a fight of it. Webb gets labeled as an heir apparent and the next big thing in this game, but they were not afraid to bring the fight right to him. Still, Cooper was the best guy this year, as five wins in nine rounds will attest.

But he wasn’t even close to at his best in Las Vegas.

“Yeah it sucks getting 11th, didn’t ride good, but I did what I had to do,” he said. “But it seemed like that all day today. It was sun shining and looking good, then it rained. The heat race wasn’t that great. The main wasn’t that good. It is what it is and it all worked out.”

We had heard about Webb’s wrist injury a few weeks ago, but he choose to keep it secret—refusing to acknowledge it during Friday’s press conference. Still, tape on his wrist and a big brace made it obvious, and if media like us had heard, surely Savatgy, who stood to benefit the most, also knew all about it.

Webb looked okay in practice, certainly not his usual self but also fast enough to make his required 12th place finish doable. Then it started to rain. While some thought that might actually help his wrist because riders would no longer be doing the biggest jumps, he didn’t see it that way. He told Vital MX: “Mud to me is so risky. I was actually stoked, after second practice I felt pretty good. But [when it started raining] I was like “boy.” I haven’t ridden mud in forever and I’ve never ridden it on a supercross track. And the first time I had ridden since the injury was press day, so it was definitely another different aspect.”

Then he crashed right on his bad wrist. “Yeah, I pretty much landed right on it. Did what I wasn’t supposed to do,” he told us.

He did have some strategy on his side. All week, Webb and his team had worked out all the points scenarios coming into the event, so Cooper said he had a pretty good idea of what he would have to do if Savatgy was out front. And the team kept track of it all on his pit board, which Webb saw every lap. These days riders don’t even see the pit boards at a lot of tracks (remember the disaster of Ryan Dungey missing the Joker Lane in this very stadium at Monster Energy Cup, even though his mechanic had it on the board?) but Webb made sure to keep tabs.

“I saw it every lap. I knew I could get Martin [Davalos, the next rider ahead] if I had to. They were keeping me well informed on what was going on,” he said.

That’s why Webb, in pain, covered in mud, and far off his usual pace or position, pumped his fist as he approached the finish. He knew he had this title, although it was far from the grand, glorious and glitzy season everyone expected when he started the year so strong. This was just a matter of survival, and even a rider who has stared down pressure at big races like the Motocross of Nations, stirred up heat with the competition, and seems okay with staring the toughest competition right in the eye (just wait until next year) seemed a little overwhelmed by it all.

While Malcolm Stewart’s celebration was all smiles, yells and emotion, Cooper was hurting, and he was subdued. But you can also bet somewhere down the road, he’s going to look at this year’s 250SX Western Region Championship as one of his proudest moments. Just didn’t seem that way in the actual moment itself.