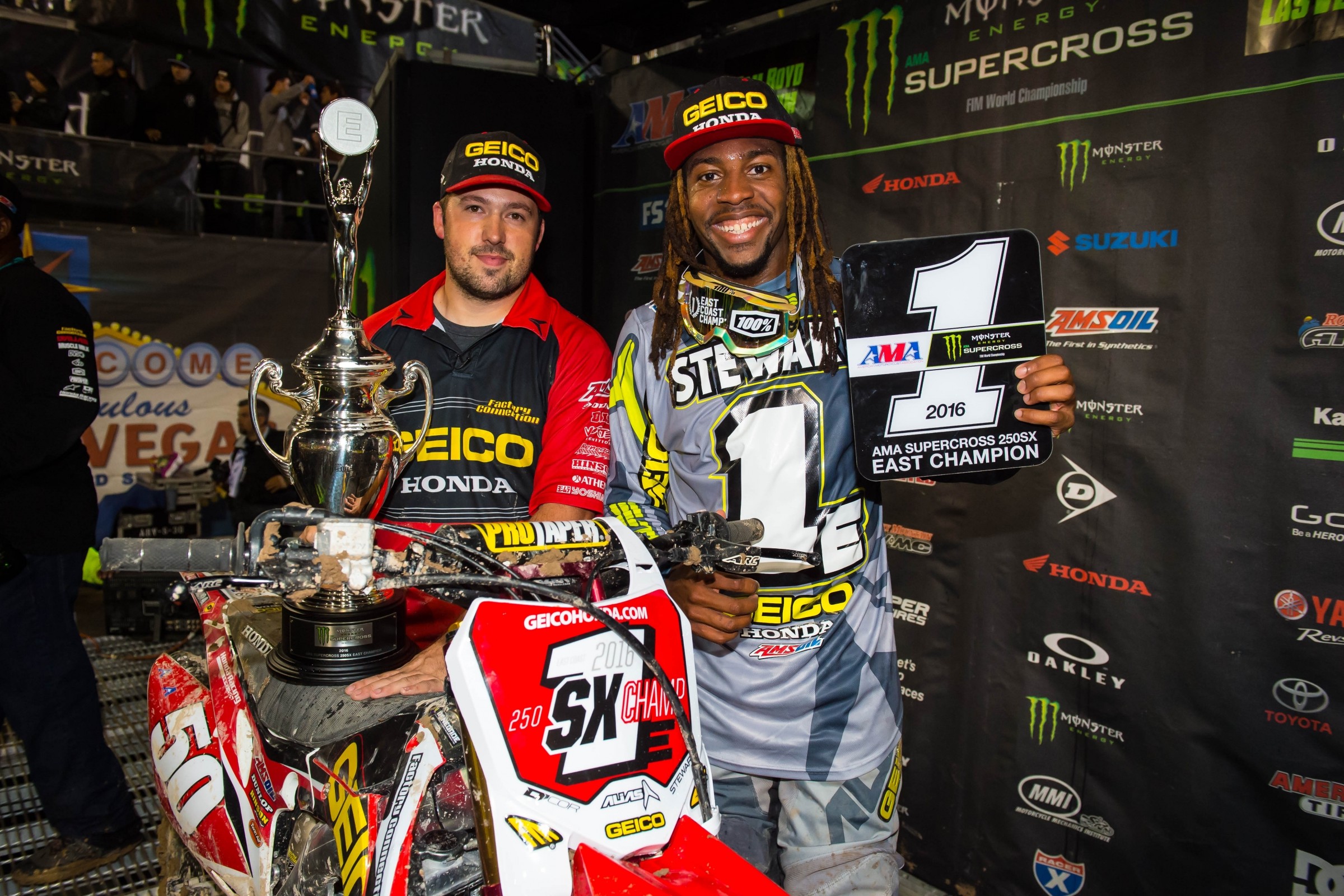 Malcolm Stewart is no longer known in racing circles as James Stewart’s younger brother. He now has his own large bullet point on the racing resume by taking the 250SX Eastern Regional Championship in Monster Energy Supercross. But for Malcolm, who for years maintained he’d rather go fishing than racing and for years was the kid who just had fun while James aspired to greatness, life at the top of the points chart was both unexpected and tough. He finally revealed how badly the pressure was getting to him when he found him celebrating under the GEICO Honda tent.

Racer X Online: You did it!
Malcolm Stewart: It’s a big weight off my shoulders, finally! I felt like I had the whole semi on my shoulders! But it’s an amazing feeling for me to finally accomplish this and making history with my brother. I’m speechless right now. It’s one of those things that I don’t even know how to explain it. The days that me and my brother went through this year is crazy. Right at St. Louis I started doubting myself a little bit. I was like, do I really have what it takes to win? I went down three times. I blew a huge chunk of points. I kind of kept it to myself, but I kind of had a big meltdown after that night. I was like, “Am I cut out for this or what?” We went to Boston and I went out there and got a good start and I went backwards. I felt like Boston was an even bigger meltdown! I was sitting there like, what am I doing wrong? I didn’t want to accept the pressure. I was hiding it. I was pretending like everything was perfectly fine but in my head everything wasn’t. The wheels were not spinning. I felt like everything was just coming at me fast. I felt like it was less pressure when I didn’t have a red plate. I’m seeing all this happen, the transition. I didn’t know how to process it. I didn’t want to accept that I put myself in that situation. I forgot the whole point of what racing feels like. You race because it’s fun, not because it’s a job. You race because you wanted to do this. You didn’t spend your whole entire life racing just to not be in this situation. Everybody wants to be in this situation! But it was hard for me to accept that, and I think the reason why I didn’t want to accept it is because I just didn’t want to be like…I just didn’t want to believe this was happening [leading the points, battling for a title]. I wanted to pretend like I’m going out my normal way like nothing’s ever happened, it’s just a red background on my plates and I’m not the points leader. But reality hit and it was happening, it was coming.

My brother, we talked after Boston and he reminded me of why I chose racing. He reminded me that, “You did this. You brought this on yourself. You earned this points lead. You earned this red background. This wasn’t given to you.” He was like, “You earned it.” After we sat down and talked about that it was like a light switch. I was like, “He’s right. I deserve it! I did earn this!” I went out last week and I just wasn’t even going to worry about the points lead. I’m just going to do me. It got me a win and I was like “Whew!” That was definitely a lot pressure of pressure off of my shoulders. Then we’re back here in Vegas. Everything was going good. I felt like I started stressing a little bit right when it started raining. Now I felt like this is one of the championships that’s really going to really be challenging. This is not a race that it should ever rain at, and it wants to rain the night I’m trying to accomplish the championship! So of course I started freaking out. Who brought this up on me? Who was praying for this rain to happen?

Luckily, I felt that I processed it very well. I went to the heat race, got a good start, and actually was pretty confident on my start. My starts have been really good lately. I’ve been really practicing them a lot. Me and my mechanic back home did a lot of starts and we got it down. Almost got the holeshot in the heat race, then we went to the main event and got a very good start. I just put a solid 12 laps in. What was funny was I decided I wanted to get tired and get arm pump on the very last lap. It was all hitting me! I felt like it was like back in Boston again! Stopped breathing, panic mode, over-jumping, under-jumping. And that’s the last thing you need to happen in mud situations. I heard a guy behind me, I was like, “Who is this guy?” I didn’t even know if it was my arch enemy [for the title], Plessinger!

I heard something happen to him the very first lap, and hats off to that guy. For him to come back from dead last to almost be all over me… For sure, he would have won the race if he had stayed up, hands down. He definitely deserved it for sure. I just kept it on two wheels and tried to do the best I could do and we got the championship. It was funny because I jumped the finish line and I saw my brother. He was so stoked. I was screaming in my helmet and I fell over. That was the funniest part. I just flopped over! When I fell over, I started kind of laughing. Hey, at least I fell after the checkered flag. Nobody cares then. But it’s an amazing feeling and my whole entire family and the whole GEICO Honda crew, I definitely couldn’t have done it without them. I’ll say it again: half this championship goes to my brother because without talking to him on the worst nights I could probably ever have…he talked me through it and put me in this situation because he’s won championships and he knows how to process it. It was my job to go out and do it, and I finally did it.

We finally see Mookie on a 450 in supercross next year?
Obviously you’re a rookie, so I’m going to go in next year actually really calm. Of course you want to go out there and you want to try to beat the 450 guys, but everybody knows in your rookie year it doesn’t always go smooth. So it’s a long season. If you mess up the first round, you got 16 races to go, so don’t worry. It’s going to be fun. I’m excited to move up and finally race against my brother at Anaheim 1 next year!

Do you think that you were kind of fighting for your family and with this title? Been a rough stretch for your crew.
Yeah, I definitely have a little bit of revenge for the stuff that my brother went through, especially at Anaheim 1. When he went and got knocked out I was like, “I’m going to win this championship for him.” But it wasn’t easy! Easier said than done! But I wanted to show people that we’re not going away. The Stewarts are not just fading away in the sport. I wanted to show people that we’re still around. We still can win. And I did it tonight.