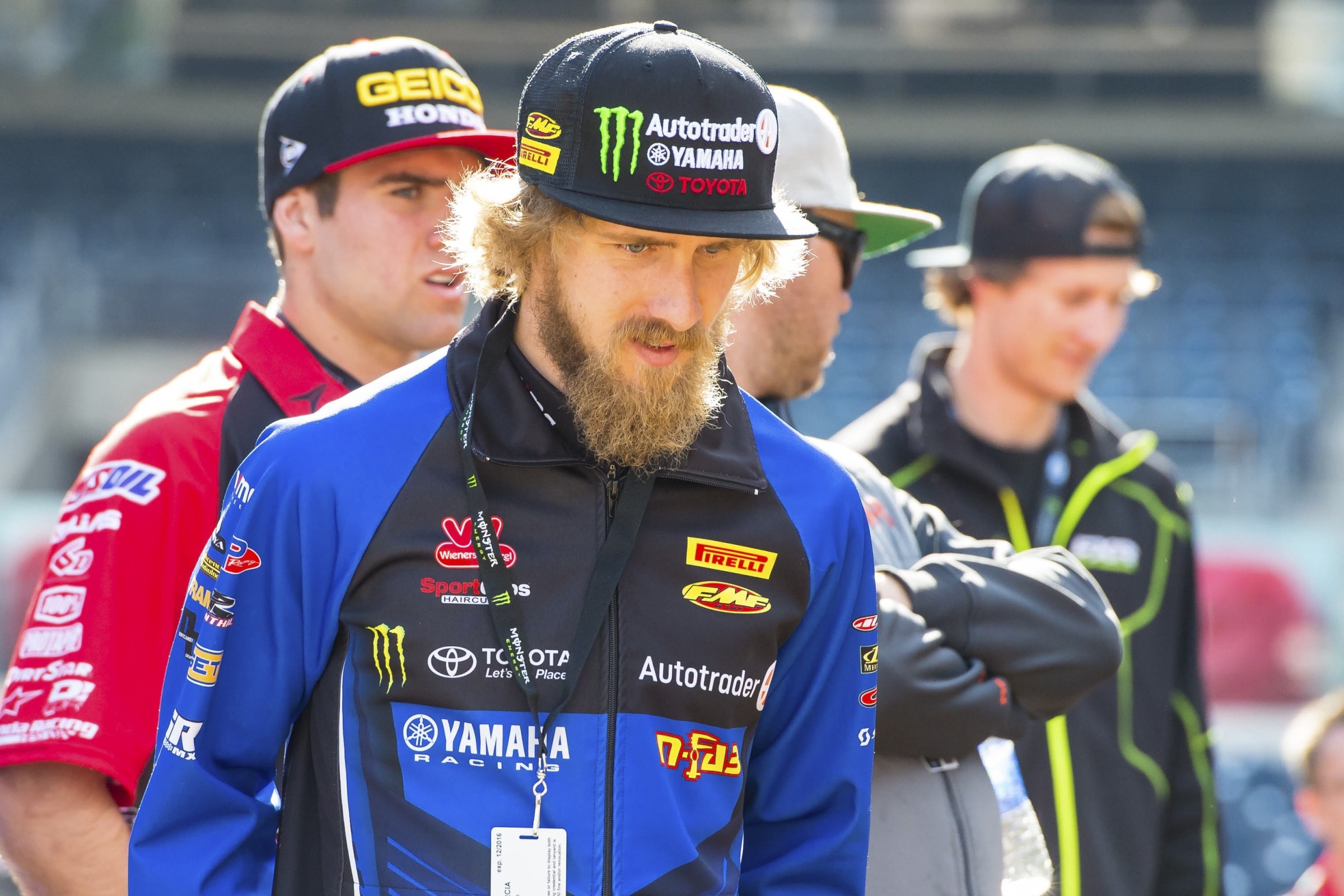 As far as big-time professional supercross goes, you can’t keep a good man down. Unless that man’s thumb has been damaged. As any of us who has ever climbed on a motocross bike and twisted the throttle downward knows, no matter how supremely fast and talented a rider may be, they just pin it if you can’t hold on.

Just prior to the drop of the gate at Angel Stadium in January, AutoTrader.com/Monster Energy/JGR Yamaha’s Justin Barcia tipped over on his mountain bike during a light training ride and tore his Ulnar Collateral Ligament aka Skier’s Thumb. Barcia tried to tough it out and ride through it at both Anaheim 1 and San Diego 1, but the pain was too much to manage as was trying to keep himself affixed to his YZ450F, so off it was for surgery and an immediate nine round leave of absence from Monster Energy Supercross.

But now he’s back. Healed, rested and rehabilitated, the recently turned 24-year-old will compete inside Levi’s Stadium in Santa Clara, California on Saturday. It’s something of a repeat performance of 2015—where he also missed a lengthy stretch of the supercross series due to injury—but Barcia is quite keen to get back in the fray and make something good of the still young 2016 supercross and motocross season. Last evening, while packing up his gear bag for the trek to the Silicon Valley, Racer X talked with the man who is, more than anything, just plain stoked to get back to racing.

Racer X: Justin, where are you at this Thursday evening?
Justin Barcia: I’m up here in Charlotte right now. I fly out tomorrow morning.

Nobody has heard from you all that much since the season started—being injured and on the sidelines can have that effect on a guy in your profession. Having said that, how are you and are you ready to go racing?
Yeah, I’m actually really, really excited. I think being on the bike a few weeks here, I feel a lot better than I thought I would feel. So that’s good. I think we’re all real excited and I’m glad I’m back racing and we’ll just see what happens.

A thumb injury has to be sort of an odd injury to come back from for a motocross guy. I mean, it’s not a big injury and it’s a small part of the body, but without the thumb, there’s no hanging onto a race bike is there?
Yeah, exactly. Luckily, Dr. [David] Berg in Tallahassee has been my doctor since day one when I started racing and he’s really good and he did a great job on my surgery and my thumb is almost 100 percent. Now it’s just building strength every day and stuff like that. We kind of planned Santa Clara to come back, and we weren’t sure if it would work out or not, but the past couple weeks have went really awesome and everything has been going really good so it’s definitely exciting to be back racing and see where we’re at and stuff like that. It’s hard to come back. You know, I’ve had to do this, unfortunately, a couple times. At least now I know, not really what to expect, but I just kind of know how things go being through this a couple times.

Yeah, the situation you are in right now is almost identical as last year. Due to an injury, you missed eight straight supercross races before coming back and competing in the last four. Now, in 2016, you’ve missed nine races and will make it back for the last five.
Yeah, exactly. I mean it sucks, for sure, with the injury because I think we had an extremely good chance this year of winning a lot of races and being in the fight, but unfortunately that got cut short and you just have to look past it. I think I’m in a lot better place than I was last year. We had a nice little sit-down meeting yesterday at the shop with all the guys and we got everyone together and just talked about everyone’s expectations and what we need to work on. All this is really going to help this going into the outdoors more than anything—with team communication and stuff like that. I’m super-excited for the weekend!

As far as those expectations, what are you realistically looking for this Saturday night as well as in the weeks and months to come?
You know, I think, obviously, expectations are always high for any racer. I think I’ll have great speed and I’ve been riding super-good during the week. You never know until you get to the race, but I know I have some good speed. I’m not really putting any expectations on myself. That’s what happened last year when I went back racing. I put this big expectation on myself and I fell short of that. This year I’m going in really open minded and I’m just going to see where I’m at. I know I have great speed, and you can’t control some things that happen at the races, but I think I’m really in a good position, for myself anyway.

I’m sure the other guys aren’t that happy because I’m known to have a little fun and mix it up even though I’m not in the championship hunt or anything like that. They might be bummed, but for me, I’m just excited to be back racing.

Just how long have you been on the bike and putting in high-speed laps?
It’s been close to three weeks now that I’ve been back on the bike. I’ve been really doing a lot of cycling training and I’ve been working on a lot of new stuff that has been pretty exciting because I really feel like I’m in great shape. I spent some time in Arizona and did a lot of training on my bicycle and I think that’s really paid off for me. I know I can do 20 laps no problem, that’s not an issue. I know my body is ready for sure. And mentally I feel good about it all. It’s definitely exciting to see where were at and go from there. The team is not really putting any pressure on me. They’re just happy that I’m healthy and back racing and I feel the same way.

You’ve always struck me as a guy who just loves to ride and ride and ride. In other words, you’d probably do it for nothing. So when you are forced out due to injury and put in a position to watch the world go by without you, does it drive you up a wall?
Mentally, it was extremely tough watching the races. I mean it’s a good thing to watch races because you learn a lot of things, but for me it’s very tough to watch them because I love racing. At the same time, I got to take a step back a little bit and do a lot of off the dirt bike training. I had a special cast made for my thumb where I could train pretty much and I had a pin in there so it was solid and I wouldn’t hurt anything. Healing-wise, I didn’t really take off any time. Three days after surgery I was already riding my bicycle and just letting myself heal. When I got the cast off, I was like, “Let’s go! I’m ready!” I did therapy and stuff and got strong, and I got back on the bike about three weeks ago. It’s kind of crazy, but I feel like I didn’t really miss a beat. I had a lot of great people helping me right now to get back to racing. I don’t really have any pressure on my shoulders because everyone is just excited for me to be back racing. There’s no pressure to win, or get top five or top ten. I can just go there and pretty much just have fun and usually when I have fun, it usually turns out pretty good.

From your vantage point of watching the races from the couch, what have you thought about all the racing thus far in 2016?
Well, I think everyone has kind of been looking for that one or two guys to mix it up a little and throw some excitement in there and it hasn’t really been too exciting. For me watching on TV, I never really get excited because I’m like, “I think I can do that!” Or “I think I can beat him!” For me, it hasn’t been super-exciting. The 250s, I think have been a little more exciting. For me, I’m excited to be back and to mix it up a little. I’m sure the other guys aren’t that happy because I’m known to have a little fun and mix it up even though I’m not in the championship hunt or anything like that. They might be bummed, but for me, I’m just excited to be back racing.

Well, eleven rounds into the series, things have certainly fallen into something of a pattern. Bringing something new to the series come Saturday night, it’s very likely that many fans out there are going to welcome you back with open arms. Thoughts?
Yeah, and I think that’s really cool and I see that on my Instagram after I’ve posted some videos and stuff. I’ve seen the fans saying, “Man, we’re so happy you’re back!” It’s really cool to see that everyone is excited. They know how I race and ride and they’re like, “We think you’re going to get this place or that place!” It’s funny to see that, but let’s see where we’re at and see what happens. For me, I’m pretty much going there to have fun and I don’t have to worry about a championship. That’s kind of a lot of pressure off my shoulders. I mean I like the pressure, but right now I don’t have the pressure so I can just go there and enjoy bonding with the team and hanging out with the fans and racing.