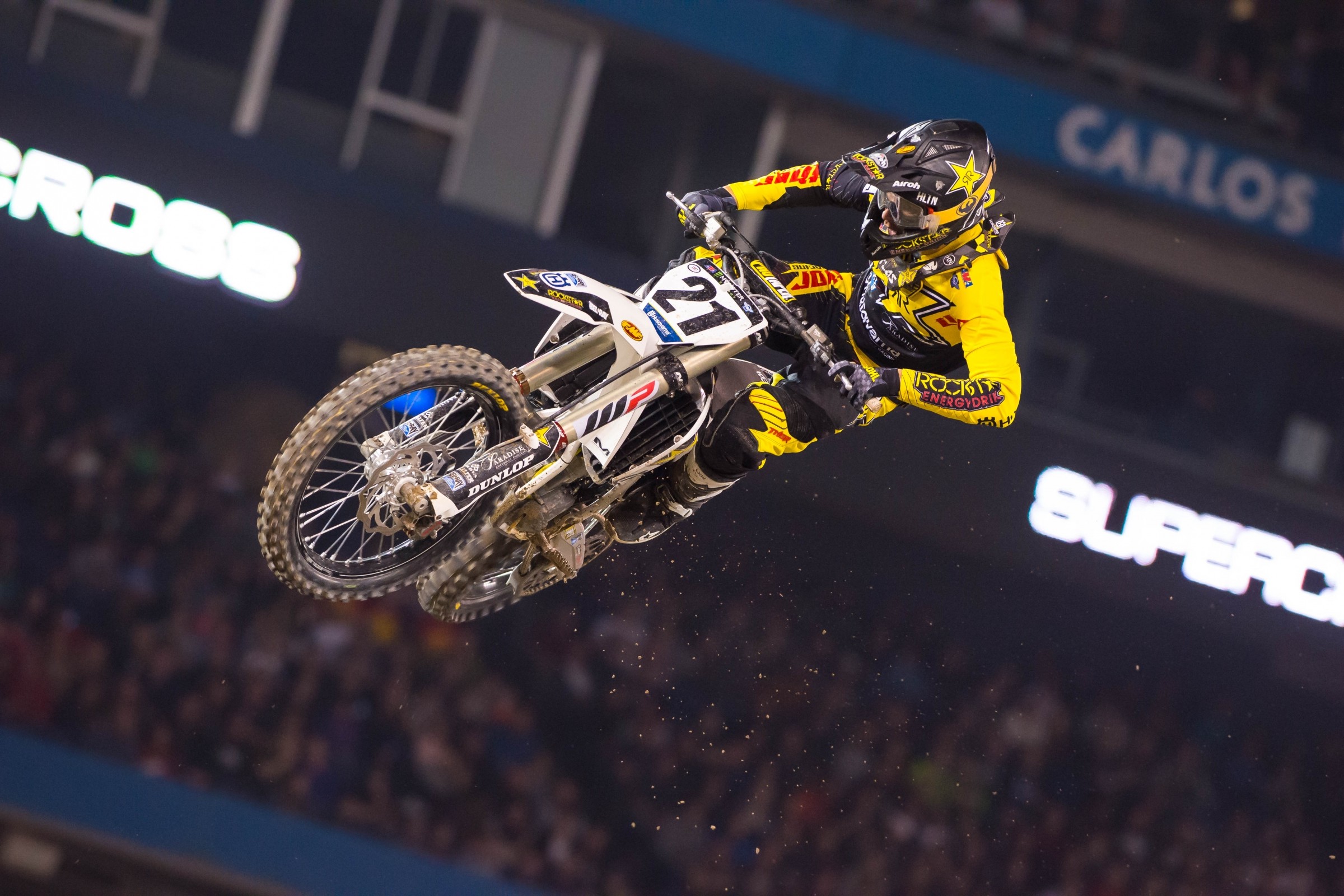 by Jason Weigandt and Aaron Hansel

It’s the sequel for the Justin Barcia comeback. A year ago he returned for the last four races after missing a bunch of time with a broken pelvis, but he wasn’t very competitive, going 9-16-20-8. But even before getting hurt, Barcia wasn’t exactly killing it in supercross last year, going 6-11-4-6-8. This season, we’ve only witnessed a few laps of glory from Barcia before his thumb injury caught up to him, but they were darned good laps—he was leading Anaheim 1. Barcia appears in a much better place with his bike, team, riding and health this time around—don’t be surprised to see him up front like he was at the opener. – Jason Weigandt

Speaking of comebacks, we can’t even count the amount of times Hanny has disappeared from the track for various reasons, only to come back again and again, but he’s going to give it another go this weekend in Santa Clara. Hanny raced 250SX West last year and finished tenth in points, but he’ll race a 450 this weekend. His last full season in that division was in 2012, and he collected two top fives. As always (always, always) the talent is there but we have no idea if he’s prepared well enough to make an impact. – Weigandt

What Will Stew Do?

And more for the comeback list: James Stewart! Normally, someone of Stew’s caliber returning to the track would be a big story, but this whole season has been dotted with in and outs for James. Each return has pretty much ended in another stint on the shelf. So this time the Yoshimura Suzuki team didn’t even put out a press release on James’ return, telling us they’d rather go low profile with the comeback announcement. How will James do? Sounds like that’s not even the big question. He just needs to get out there and log some laps. Fans that saw him struggling in Oakland or looping out in Daytona know that’s all that matters at the moment. Amazing that we’ve come to this point with a man who has won 50 career main events. –Weigandt

So which Ken Roczen do we get at Santa Clara? The one who passed Ryan Dungey and Eli Tomac and pulled away for the win in Toronto? Or the one who was listless all day in Detroit? Each time it appears Kenny is about to get hot, he gets a chill the next weekend. “I’m really glad to put Detroit behind me,” said Roczen in a team statement. “It was nice to go into the off weekend healthy and be able to work on some moto testing. Obviously, I was hurt last year when the series raced in Santa Clara so I’m looking forward to racing somewhere I’ve never been before. Hopefully, we can get another win and make up some points. There’s six races left and anything can happen so we just need to stay focused and not make any mistakes.” Kenny hasn’t given up by any means—but which Kenny will we get on Saturday? –Weigandt

Jason Anderson comes into Santa Clara having won the last race, but he doesn’t have any of the momentum or confidence that comes with it. Remember, he took the checkered flag second behind Ryan Dungey in Detroit, but got the win when Dungey was penalized. On Sunday morning on Instagram, he summed it up like this: “The official results say I won.... but I didn't haha. Hopefully I can battle for a win straight up in the remaining rounds!” As usual with Anderson, the straight-up part will come down to his starts. If he could ever get a holeshot, there’s no doubt he could beat everyone to the checkers this time. –Weigandt

Cooper Webb currently sits eleven points clear of Joey Savatgy in second, and with only two races left in the 250SX West Region, even a pair of thirds would guarantee him a championship. In other words, bringing the title home is obviously well within Webb’s abilities. But if the action from either 250SX region has taught us anything this year, it’s that anything can, and often does, happen. Just ask Savatgy, who surrendered the red plate when he and Christian Craig collided in the whoops, and he went over the bars hard. Odds are, Webb will make it through unscathed, but it’s a situation worth monitoring. –Aaron Hansel

So far 2016 hasn’t been great for Weston Peick. After throwing punches at Anaheim and then getting thrown out of the first two races, Peick hurt his arm and shoulder and whacked his head in Oakland. He’s been riding hurt ever since, but in an interview with him earlier this week, Peick told us he he’s finally starting to feel better. He also posted his best finishes of the season in the last two races, an eighth and a seventh. He took his first career podium last year in Santa Clara. After a weekend off to keep healing, we’ll see if Northern California holds more magic for him in 2016. –Hansel

Speaking of NorCal magic, Yamalube/Star Racing Yamaha’s Alex Martin has pulled some terrific results in the region. He recorded his only two career supercross podiums last year in Oakland and Santa Clara, and he killed it at Hangtown with a fourth last season. He was even running third in Oakland earlier this year before crashing out. Let’s see if Martin’s NorCal mojo returns in Santa Clara. –Hansel

Cycle Trader.com/Rock River Yamaha’s Colt Nichols has been the breakout 250SX West star this year, hands down. He took second place in Oakland and was fourth in the last two races out west (San Diego and Arlington). It’s even more impressive when you consider he didn’t have a ride lined up (he was passed over by GEICO Honda in favor of Jimmy Decotis) until about a month before the season, and didn’t even get a chance to ride his race bike until a few weeks before A1. We’ll see if he comes out of the break even hotter than he was before. –Hansel

Is what Marvin Musquin and Red Bull KTM have got to be thinking. Musquin narrowly missed out on getting his first 450SX win when he led nineteen laps in Atlanta, and since then has been on the podium every time, including a pair of runner up finishes. In fact, had he not been passed by Jason Anderson for second on the final lap in Detroit, he would have won the race, on account of Ryan Dungey’s penalty. Musquin’s going to win one of these things sooner or later, and it could happen in Santa Clara. -Hansel