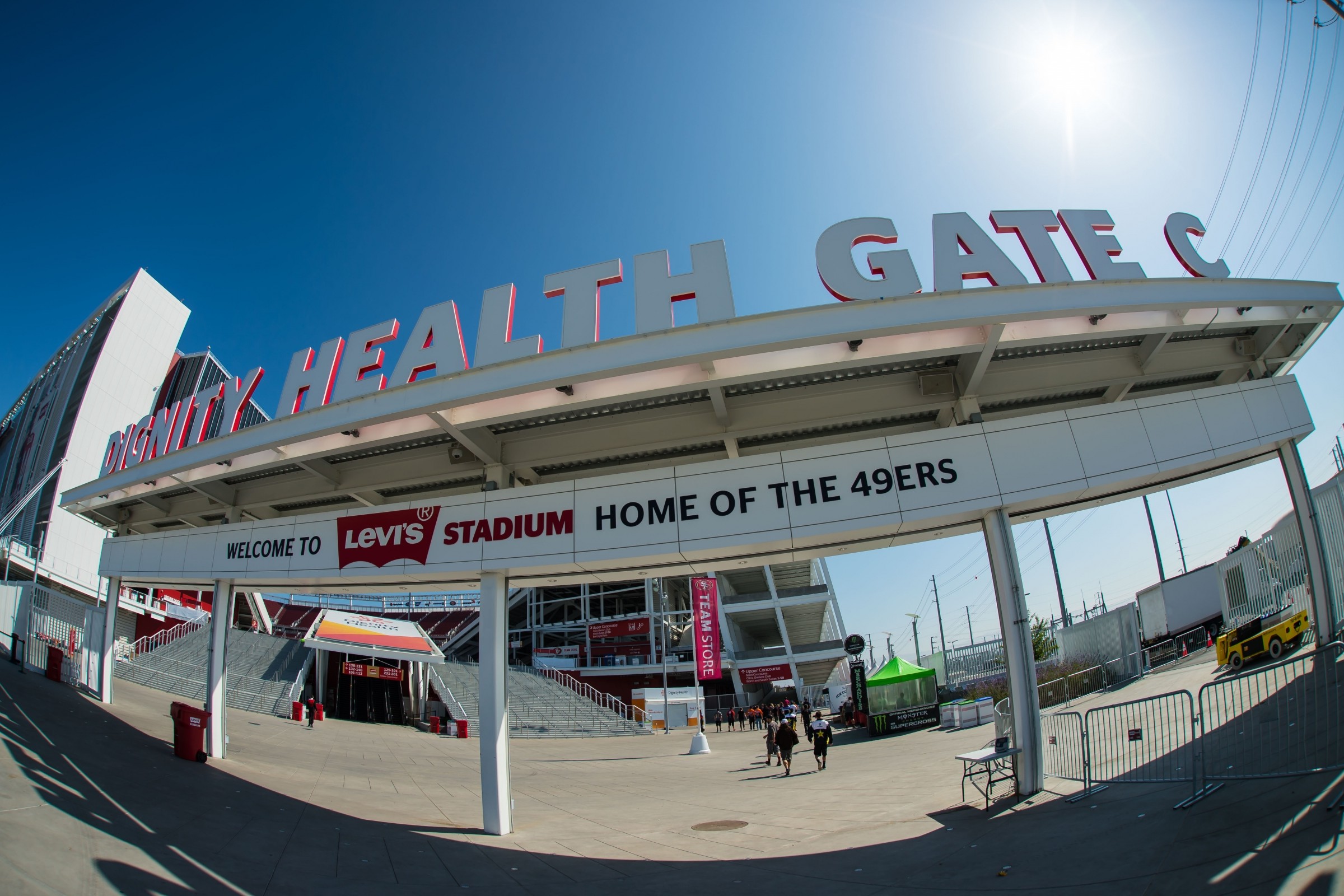 Last year was the debut of the Santa Clara edition of Monster Energy Supercross. The San Francisco 49ers relocated from the now flattened Candlestick Park down the 101 freeway to a brand new venue labeled Levi’s Stadium. It also marked another addition to the Bay Area racing scene, having been in Oakland two months prior. Personally, I think this race is a great example of how amazing the supercross atmosphere can be. The San Jose area weather is almost always fantastic, making for ideal track conditions and a great afternoon Pit Party for the tens of thousands of fans. The stadium has easy access to the freeway and the brand new has all of the modern amenities that make for a better overall experience. As we transition into new locales and venues over the years, I hope they all measure up to the level Santa Clara brings.

The track looks to be the typical supercross track but there are always variations worth noting. The biggest difference maker will be the two sets of whoops. The longer of the two could be a good place to pass. The straight away just after will give riders a chance to position themselves for a block pass. They will also be able to use any extra momentum they gained in the whoops to blow past the rider before entering the turn. In both cases, the lead rider will want to exit the whoops on the left side and guard the inside if there is any pressure from behind. Being the last turn, watch for some hyper-aggressive moves here if needed for qualifying spots or in the main event.

For the 250’s, there will be a tougher-than-average triple on the opposite end of the track from the starting line. The triple is preceded by a single and then a flat, ninety-degree turn. That combination means that riders will be accelerating from a virtual standstill as they try to clear the triple. Back in the two stroke days, this would almost guarantee that everyone would be simply doubling the first two jumps then rolling the last single. The four stroke 250’s have at least given riders the capability to clear sections like this, but for many of the privateers it still won’t be easy.

Many of the other rhythm sections will have to be sorted out on race day. It’s too tough to predict how sections will play out because the angles of the jumps and differing heights can completely change what is possible. A section of seven jumps, such as the first straightaway and the one just before the long whoops, can be traversed several different ways and that will all depend on how Dirt Wurx shapes the individual jumps on Thursday and Friday.

Ryan Dungey is running hot and I don’t mean just in his riding. He was very mad about the penalty he was handed in Detroit and rightfully so. To take away a win in that scenario was heavy handed, especially after nothing was done to anyone else in similar incidents in the same main event and earlier in the night. I expect him to come out swinging on Saturday.

Malcolm Stewart rode a brilliant race in Detroit and now has the red plate to show for it. He has a weekend to relax and watch the West Coast boys duke it out. I wish he was riding a 450 this weekend. That would be fun to watch.

Cooper Webb lands here but it’s been so long since the West Region raced that I don’t even know if it’s legit anymore. He had a great weekend in Arlington when we last saw him so I am sure that good feeling still lingers. He enters with a double digit lead in the championship and would be the odds-on favorite to win the race this weekend, too.

Marvin Musquin has become a week-in week-out podium rider. After the first couple of 450 rounds, I didn’t expect to write that this season. Kudos goes to Marv for raising his game to this level. He is proving many people wrong.

Weston Peick is slowly climbing back to where we saw him last season. He struggled early with crashes and inconsistency but his 8-7 scores in Toronto and Detroit are proof that his work is paying off.

Eli Tomac looked to be ready for war leaving Daytona. His demeanor finally looked right and I thought he would be a contender down the stretch. That hasn’t happened and his last two races have been a struggle. His speed seems to be good at times but his main events just aren’t coming to fruition. I think outdoors will be a totally different story but with six races still left to go, supercross is still important for his team and sponsors. If nothing else, they need to figure this out so they enter the 2017 series confident.

Trey Canard has not had the season he wanted. I think that’s fair to assume. More than anything, his starts have held him back each and every week. When he does get a good start, it’s easy to see his talent and ability shine through. His heat race wins in Toronto and Detroit were proof that he can indeed stay at the front when he puts himself in good positions.

Joey Savatgy could make a case that he shouldn’t be listed here and I wouldn’t argue it too hard. My main justification for his positioning here was that he went into Arlington on such a high and left on such a sour note. His points lead vanished and was replaced by a double digit deficit. He needs to right the ship in Santa Clara if he wants the title.

With Justin Barcia returning, he and Weston Peick battle it out for best Wienerschnitzel.