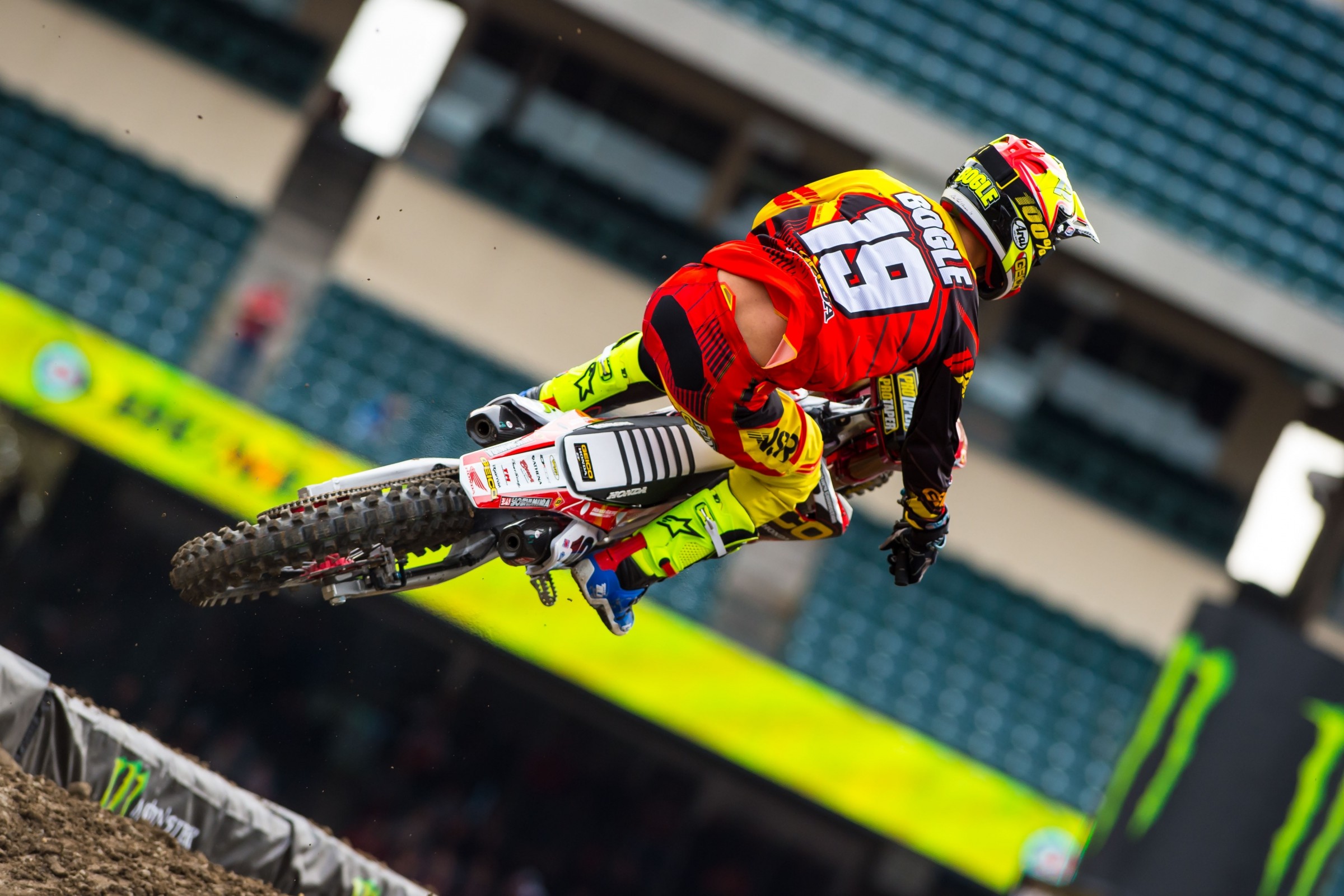 Missing races due to injury early in the season isn’t exactly what Justin Bogle was hoping for this year, but aside from his DNF in Toronto, he’s been starting to string together some better finishes lately, and is looking forward to improving more by the time Las Vegas rolls around. We gave Bogle a call yesterday to get an update on his progress.

Racer X: Let’s start by talking about what your first year in the 450SX class has been like.
Justin Bogle: My season hasn’t really been anything to write home about, but considering the circumstances, the season is what it is. I’m improving and gaining ground at this point and starting to get more confident. I’m starting to feel more like I expect myself to feel. The results so far have definitely been off from what I expect, and it’s frustrating at times, but there’s light at the end of the tunnel. Everyone at GEICO Honda, all the guys, are working hard and putting time in. All that cliché stuff: work, work, work, whatever. Obviously that’s part of it, but nobody wants to hear about the labor. Show me the results, and that’s what I’m working on right now.

What’s been your biggest unforeseen challenge so far this season?
The injuries. I’ve been putting myself in difficult situations these last few years. Last season my bike malfunctioned and I hit my head pretty hard, it took me out for a couple months. Broke my foot in December, and had that crash in San Diego. I’ve been fighting an uphill battle. Not making excuses, that’s the farthest thing from what you’re trying to do as a professional, I want to win and be out front. That’s all that matters, not the reasons why you’re not doing it. But like I said, I’m starting to feel good and figure out more things about myself, body wise, and I’ve been working with my trainer Ryan and with Robbie [Reynard] with my riding.

It’s not like racing isn’t the only thing you can’t do when you’re hurt. You can’t work during the week either.
Getting injured is no fun for plenty of reasons. The biggest is your progress toward the goal you’re working for in life stops and you have to sit there and wait. As soon as you get told by the doctor it’s go time, you get back to it and try to cram as much as you can in in a short amount of time. Unfortunately, or fortunately, however you want to look at it, I’ve gotten used to having to do that these last few years. When you get injured multiple times in a row, sometimes in a single season, that’s hard. I’ve worked really hard, and have had to truly believe in myself. And a lot of times I’ve been on an island with that thought. Sometimes there are people around you who don’t even think you can do it. That’s the biggest thing, keeping your head strong. If you believe in yourself you can do anything.

Speaking of injuries, what thoughts were going through your mind in Toronto when you crashed in that rhythm lane?
I hit the ground, got up, put two fingers to my neck and checked my pulse and said, ‘Okay, I’m alive. That was pretty incredible that that just happened and I’m okay.’ Thank God on that one, it could have been so bad. It was unfortunate that I pulled out the Uncle Larry move and took about five people out with me. But at the same time, everybody got out healthy. I didn’t get to finish the race—with my bike flipping through a crowd of people there’s going to be some damage—but most of all I’m thankful I got out of there healthy and fully unscathed. Those things can turn bad.

It was a shock you weren’t injured at all with all that traffic behind you!
For sure, as I was crashing I was trying to figure out how to tuck and roll, hoping nobody was going to land on me. Miraculously they didn’t. I really don’t know what to say about that. I was laying on my back watching people, splitting the field, with people jumping over me and around me. I was thinking, ‘Wow, this is pretty awesome, I don’t know how this happened.’ I felt very blessed at that point in time.

How’d you break your foot in December?
There was like, a mini-boulder on the track next to a rut, and my foot was still down and not on the peg yet. I basically ended up kicking this rock, and it hit me in just the right spot to fracture a bone on top of my foot. I kept riding and was like, ‘Dude, this thing hurts!’ I went and got it checked out and I was kind of in disbelief that I broke my foot without crashing or even getting sketchy. I even hit the rhythm after the turn just fine. That was weird and unfortunate, but you have to keep it moving.

Nobody really knew much about it at the beginning of the year. Were you trying to keep it a secret?
I don’t really go out of my way to keep injuries a secret, because it happens. Nobody is naïve enough to believe it just doesn’t happen. But I for sure don’t go out of my way to complain about it. I’m not going to run straight to Instagram and say, “I broke my foot so if I don’t win Anaheim here’s why.” I don’t think people really respect that, and to put it bluntly, I don’t think they care. And I don’t care to put myself in that position where I’m harping on a situation that may not be for the best. I broke my back and shoulder blade, then came back two months later and won my first supercross and ended up winning that championship. Strictly because I didn’t complain about it and kept it moving, doing whatever I could to get better. I just put my head down and did the work without complaining about it. The people who matter are going to know the situation and the people who don’t know the situation, a lot of the times it doesn’t matter what they think anyway. I don’t want to keep injuries a secret but I don’t think it’s a good look to complain either.

You’ve got some 450SX races under your belt. Now that you’ve got experience there, any goals for the rest of the season?
I want to be improving like I have been, but I’d like to make those steps a little quicker. I’m nowhere near where I believe I should be. But it’s an incredibly stacked class, it’s incredibly gnarly, and you have to respect everyone’s abilities. Everyone out there is amazing and I have a lot of respect for them, but at the same time I believe in myself. I don’t even know what my finishes are this year, I couldn’t even tell you. I think I’ve only had maybe one or two top ten finishes. I want to get up front; I believe I’m capable of it.

I interviewed Weston Peick a couple days ago and he said he believes most anyone in the field can podium at any time depending on the start.
Yeah, I think so. Circumstances play a big part nowadays; you have to get the start. I feel like I rode really well in Detroit, but I was messing around in eighteenth or something at the beginning. Without that start it’s tough to expect a podium, or even a top five. I believe in my starting technique, it’s just getting all the pieces of the puzzle to line up on the same night. One you do it once, you’re there.

With supercross winding down, how much motocross testing is happening?
You always have to be looking forward and getting ready for whatever’s next. The whole Honda team, me, Trey [Canard], and Cole [Seely] ended up back in Oklahoma last week testing outdoors and dialing in a bunch of stuff. We went to Reynard Raceway, which was very productive, and we now have what I think is a very good base for outdoors. But also today I tested supercross stuff all day long. You’re working both ends—trying to finish the season out strong and get some good finishes while trying to be ready to have a good season outdoors. Hopefully it goes better than supercross, which hasn’t exactly gone to plan.

Thanks for your time. Hopefully next time we talk it won’t be about injuries!
Yeah, I don’t plan on having this many injuries to talk about in the future! Unfortunately at this point in time my season hasn’t been too great and there hasn’t been a whole lot to talk about. Hopefully that changes and we can have us another conversation that’s a little bit better!