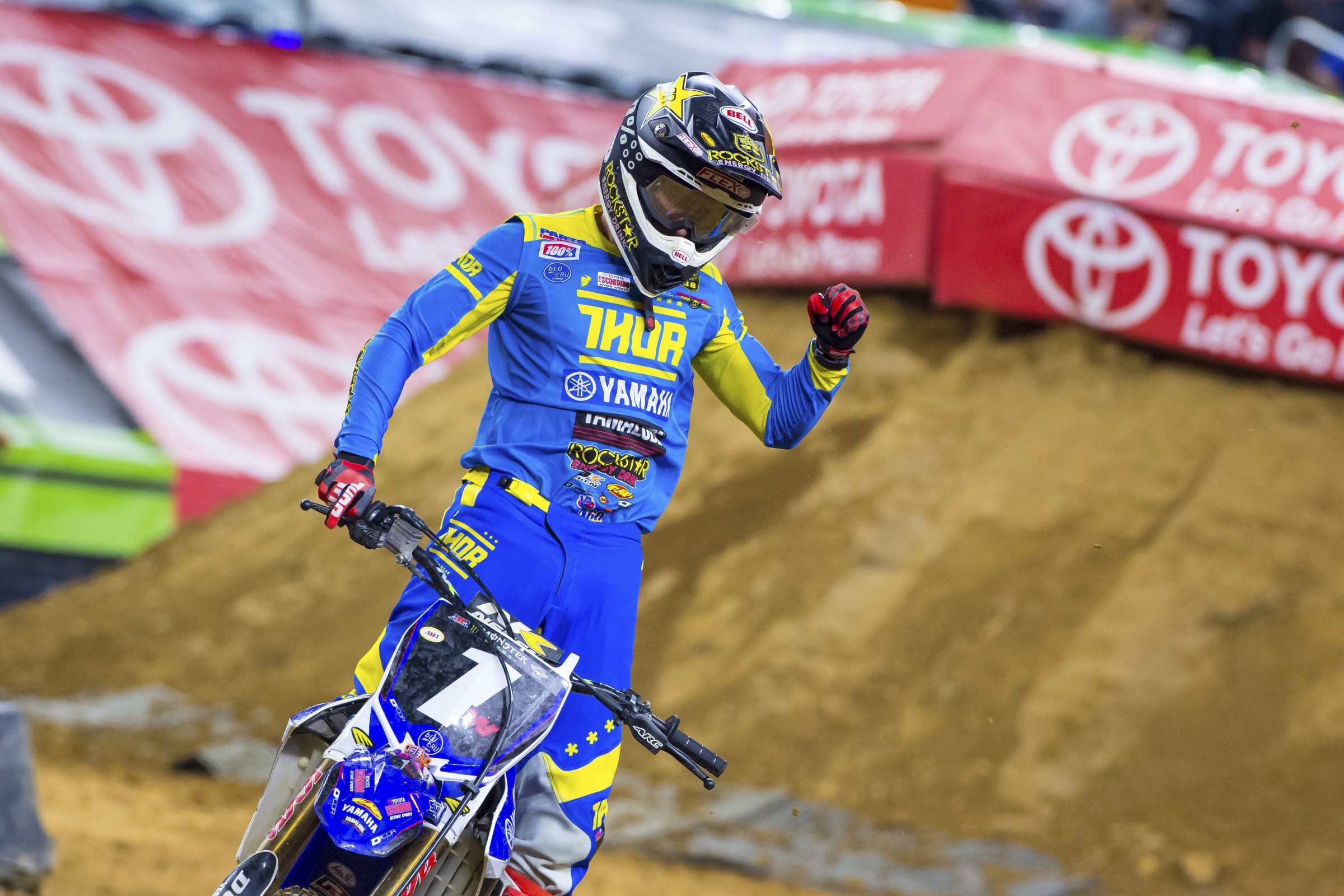 Off since February 20, the 250SX West Region Championship returns from more than a month break to Santa Clara this weekend, before taking the next four rounds off and returning for its finale in Las Vegas. (Yeah, the East/West schedule is quite weird this year.)

Seeing as most of you probably forgot there was a West Region, much less that Cooper Webb has an eleven point lead, we’ve decided to put together a little refresher to help you this weekend.

Remember, Santa Clara will serve as round eight (of nine) with the finale in Las Vegas on May 7. And that final race will be an East/West Shootout with the riders from each region stealing points from each other, and both champions being crowned when it's over!

What he needs to do to win the championship
Avoid major mistakes. Webb has clearly been the fastest rider this year, winning four races and finishing outside the top two just once. (Heck, some were even talking perfect season after he dominated the first three rounds.) But, as we point out below, there has been some missteps along the way. (Some out of his control, some in.) Eleven points is a nice cushion, but remember, Vegas is East/West combined and could serve as a major swing.

What he needs to do to win the championship
Win. Assuming Webb doesn’t make any major mistakes, Savatgy must win the final two rounds and then hope Craig, Osborne or an East rider (in Vegas) gets between the two. If you remember, Savatgy actually held a three point lead over Webb prior to Arlington, where he and Christian Craig came together early in the race. As we’ve seen in the East and West this year, eleven points isn’t a huge lead, but Savatgy will need help.

What he needs to do to win the championship
Win and hope Savatgy and Webb make mistakes over the last two races. It’s not inconceivable that Craig could win the title, but it will be challenging.

What he needs to do to win the championship
This championship is likely over for Nichols, who’s had a breakout second professional season. His goal for the final two races is podiums—and maybe a win if things break his way. Either way, his finishes so far have caught the attention of a lot of teams looking at him for 2017.

What he needs to do to win the championship
Osborne’s championship run ended at Glendale, when he was wiped out in a huge second-turn crash. He’s shown the speed to win, though, which would be big because Zach has yet to get a U.S. supercross victory. If he can snag one before the end of the season, it would give him confidence heading to outdoors.

Craig/Savatgy at Anaheim 1
At the time, it didn’t seem like much but as the series went on it had an impact. Savatgy would go on to finish eighth, his second worst finish of the season.

Craig at Anaheim 1
Craig would crash again at the opener, finishing seventeenth. Since that time Craig has gone 4-3-3-1-3-2. Give him a podium at the opener and he's right there in the points, so this was big!

Craig Washing Front End in Oakland
Another mistake from Craig, but he would survive this one and finish third.

Webb Oakland
Webb was cruising to a fourth straight win before his bike let go late in the main event. Webb entered Oakland 18 points clear of Zach Osborne and left two down to Joey Savatgy.

Webb/Craig Glendale
Webb and Craig battled hard the week after Oakland, with Webb losing the front end late in the race. It cost him a valuable three points at the time. Meanwhile, Craig picked up his first career win.

Savatgy Arlington
This was a game changer. Savatgy began the night three points up on Webb and had the momentum after a win at San Diego II the week prior. He left eleven points down to Webb.

If you feel like wasting a day or two, you can watch full races from all rounds here. We won't tell your bosses!