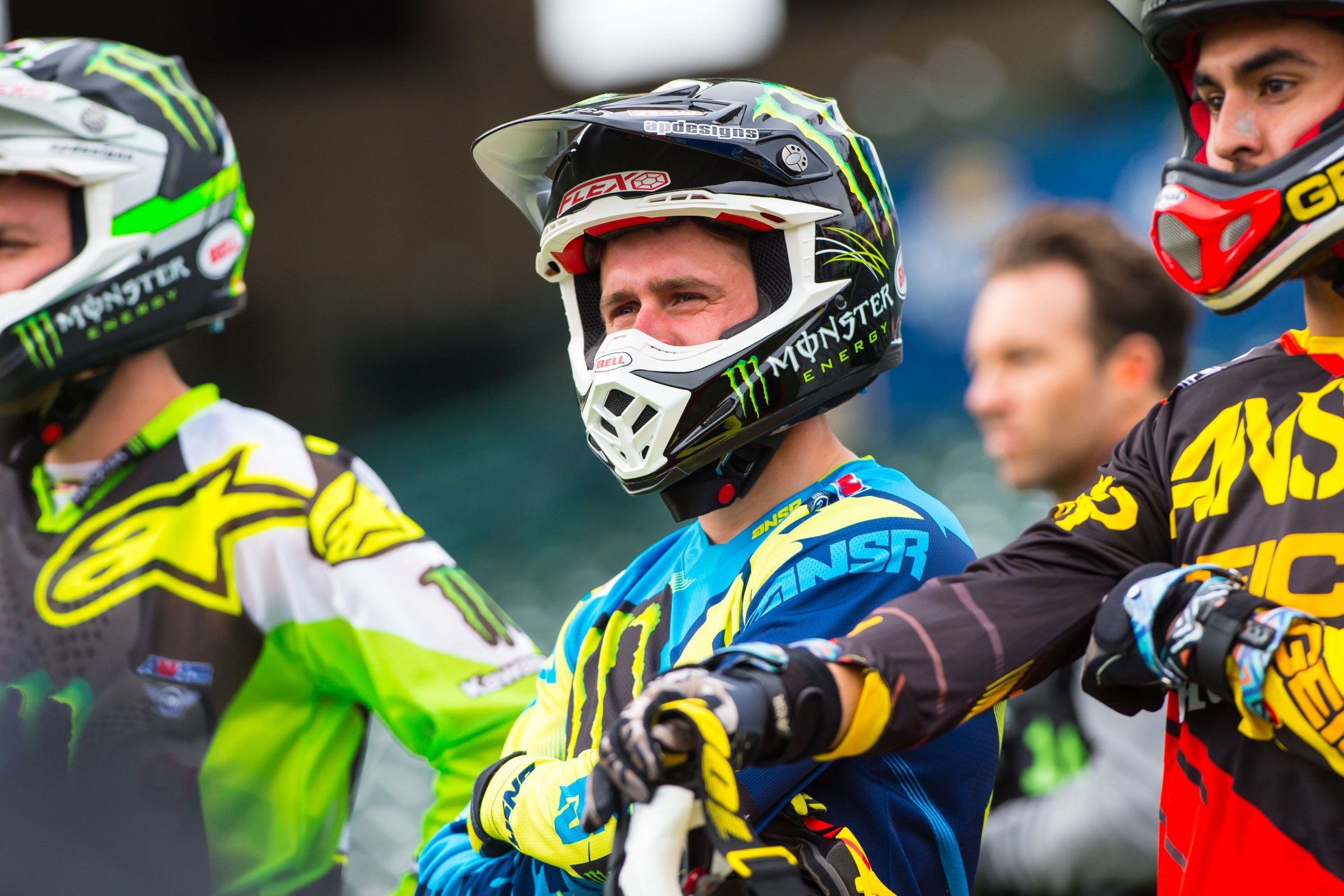 Fans and media in this sport sometimes have a “next man up” mentality when a rider on a high-profile team gets hurt. We’re concerned for the injured star, but we’re trained to immediately think about who the fill-in rider might be. Meanwhile, the rider that forced the team into this situation is on the sidelines and his phone stops ringing. It’s couch and rehab time—and things get a bit lonely.

Unfortunately Monster Energy Kawasaki’s Wil Hahn knows this all too well as he’s suffered more than his share of serious injuries. He’s on the sidelines again and trying to cope with what he’s going to do next year, how he can get healthy, and also trying to train a new dog.

Racer X: Wilbur, I’d ask what’s going on but I now what’s going on—lots of couching and rehab, right?
Wil Hahn: That’s the thing—it’s funny, I look like a guy that’s almost put myself through either medical school or to be a rehabilitation specialist or whatever because I’m just constantly learning the ways to rehab different parts of my shoulder, my arm, my back, all this stuff. So that’s been my time for the most part. Luckily I’m now able to get outside and exercise a little bit by jogging. Pretty close to riding a bicycle and being able to do that kind of stuff, but don’t really want to chance it yet with like a gust of wind or just something that makes me fall over for some reason. Not ready for that yet. But I’m getting there. I don’t know how long I can hold it up on the handlebars yet because it’s still pretty weak. That’s all my shoulder. But it’s been good.

I’ve been staying busy and just trying to do stuff I guess that normally you don’t have time for or you put it off. I’m busy, so that can just kind of go on the back burner type of thing. I got my taxes done early for probably the first time in a long time—like ever. So that’s kind of a relief in that sense. Just staying busy and just trying to keep my sanity one way or another and go from there.

I think at first we heard broken collarbone and we were like, that’s four to six, but it turned out to be a lot more than that, right?
Yeah, which sucks because I was laying there on one the side of the track and I was pretty sure something was wrong with my shoulder. I knew my collarbone was broken because once you break that once you pretty much know the drill there. I had a plate in my collarbone already, so I knew something wasn’t good there. So I went to the Asterisk truck and I thought I maybe popped my shoulder out but there wasn’t much we could really do in that time because with my collarbone being broke they were scared to really move it around. So I just got out of there and flew to my doctor’s the next day. He walked up to me and he goes, “Your shoulder’s out.” I’m like, okay, thought so. He took an X-ray, looked at it, laid me on a bed and popped my shoulder in 24 hours later. So that was not ideal.

The longer it’s out the worse it gets, right?
Yeah, it gets tighter the more the muscles are compensating for it being out or whatever. He got it in relatively easy but still it’s not good for it to be out that long. Luckily it didn’t do any nerve damage because that’s normally what you run into when you have it out more than a couple hours. You start doing nerve damage to the arm and stuff. I couldn’t really feel my hand until he popped it in.

So along with a broken collarbone, you have stretched ligaments and muscles and everything else.
Exactly. So then I go get an MRI and I find out that my collarbone is broken, my shoulder blade is broke and I tore my labrum. Luckily the rotator cuff and everything was solid. I broke a bone called the coracoid, basically the second ligament in. So I’m looking at all this stuff and he’s just tripping out because normally you do one or two or the other, it’s not four different things. He’s just like, you guys in dirt bikes hit so hard that people don’t realize that usually that’s not supposed to happen. Luckily he examined me and I waited until the swelling went down in my shoulder a little bit. Then I just went back up there and just had it all fixed at one time. It’s unfortunate because the labrum and the shoulder blade are a four-month recovery. It’s not as easy as, “Hey, the collarbone’s broken that will be four to six weeks.”

So it’s just shitty. This one hurt worse just because there was nothing I could have done to avoid this. I think that’s why it’s harder. Normally I can just accept the fact that I was being an idiot or whatever or I made a big mistake. It’s not easy to take that either, but it’s a lot easier to take than something that wasn’t my fault. Since there was really nothing I could have done, it’s tough.

When you combine this with the other injuries you’ve had, it’s got be a bit depressing as well.
Yeah, it is. As I’m getting up on the side of the track and trying to flag down someone to take my helmet off … it’s funny because everyone got carted off in the mule and I’m sitting there like, “Hey, bro, mind if I get a ride?” So in the moment, I was almost in denial. No matter how you go about it it’s always a “poor me” type of thing. It sucks because we’re all programmed that way—to lie there and go, “Why?” And in the moment I’m thinking why because I just had a bike come flying across the track and hit me. So I’m like, Poor me, poor me, why, why, why? Then I’m like, you know what—what can I do about this? Nothing. So it is what it is. Yeah, it sucks. It sucks because Shorty’s [Andrew Short] apologized to me like three times, and he doesn’t owe me an apology.

For sure, I’m up at night thinking that—what am I going to do next year? At this point I don’t know. It’s a pretty big question mark.

You’re in your last year of your Kawi deal and you’re hurt again. You’re a pretty positive guy but I imagine late at night sometimes you’re like, eff my life, what am I going to do here?
No doubt. There’s definitely a point where you’re thinking, “Well, I’m not signed for next year.” I really wanted to finish out the supercross season, regardless of results, just to show I could do it. I didn’t care if I got 20th in points. I’d probably celebrate like I won a title. But it’s just one of those things where you’ve just got to move on. Like you said, you’ve got to be positive. As bad as it sucked, dwelling on it’s not going to help us. For sure, I’m up at night thinking that—what am I going to do next year? At this point I don’t know. It’s a pretty big question mark. And the unfortunate side of our sport is after the first couple years or whatever, then you’re pretty quickly forgotten, but that’s part of it.

The way they’re moving everyone up from the 250 class so quickly is really hurting us, too. Cooper’s [Webb] ready. Those guys that are moving up are ready. I’m not denying that. It’s just that other guys, including myself, could have benefited from another year in 250. It’s hard to balance it out. Because I definitely agree that Cooper’s ready. The way the rule worked for him and he’s totally ready to do it. But then there’s guys who I just feel like could benefit from either staying in it longer or make it a 17 race series and let them stay as long as they want. If you can make a living doing it, do it. I’m not going to hate on it. It is what it is.

In the good news department you got a new dog.
Yeah, so that’s keeping me busy. Training him, it’s like basically training myself all over again. Like, hey, Wil, don’t poop inside. It’s been good. It’s been testing my patience, that’s for sure. There’s times he knows he needs to go outside and he just goes. I appreciate that. But we’re in it and learning how he acts and why and trying to get him to accept that when I leave I’m coming back. It’s been a good thing. I needed that kind of distraction and just that sense of responsibility that I haven’t had here at the house. I’m not partying or whatever but it’s nice to go home and he’s at home. He’s been there for an hour by himself so I’ve probably got to take care of him.

Do you think you’ll be back this season?
I hope. At this point it’s pretty up in the air. It’s tough to give you an answer yet because I don’t really know, but I don’t see any reason why I can’t. I’ve done it before. But at the same time I’m kind of at the point where I want to make sure everything’s right. I feel like now in motocross, and I could be partially to blame for it as well, we all have this competition to see who can heal the fastest. It’s like, I healed quicker and I healed my broken femur in three days. I’m trying not to do that because I want to make sure that it’s right. I don’t want to go through this surgery again. I don’t want to blow this shoulder out. So as hard as it is I’m trying to be patient and listen to whatever doc says. So whatever he says, I’ll try to be back at that date and if it’s earlier, great. I’m doing everything in my power to make it quicker by rehabbing and all that. I’m going to listen and also make sure it’s right.

As a factory Kawi rider, do you have obligations still to them? Are they going to bring you out?
I think that they’re not going to make me do really anything but I’ve told Dan [Fahie] now that I’m up and going and I’m around that I’m coming to the race this weekend. I have no issues going and doing my normal thing other than riding. I’ll go sign Friday night, do all those deals. I’ve never been a guy that’s had an issue doing that stuff. These guys have been really good to me so I want to make sure they’re happy no matter what, even if I’m not racing. Got to do what I can.