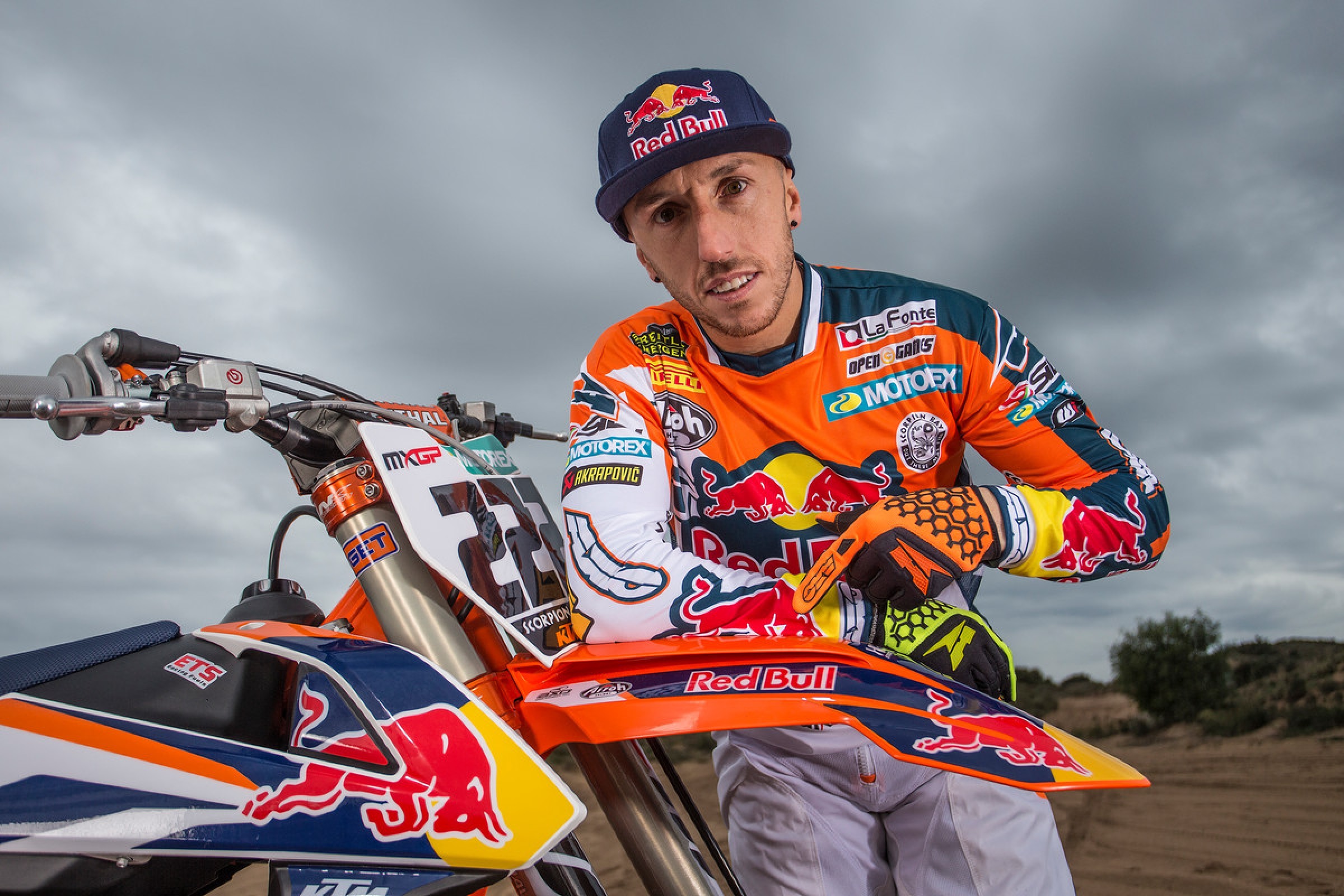 It is almost a calendar year since MXGP’s most recognisable and decorated star—Red Bull KTM’s Antonio Cairoli—last savoured a Grand Prix victory. The Sicilian has dealt with complications of two injuries; one (a broken arm) that wrecked his 2015 quest for a ninth world crown and seventh in a row and another (cracked ribs) during pre-season that means the 30-year-old is still building up to full race fitness. Now committed to MXGP and KTM for another two years after a recent contract extension with the Austrians that will mean nine terms together, we decided to catch up with him before the Grand Prix of Europe over Easter weekend—a fixture he dominated for half a decade up to the troublesome 2015 campaign. This time, he almost grabbed his first chequered flag of the 2016 across the damp Valkenswaard sand.

Racer X: After the first few GPs how close are we to seeing the real Tony Cairoli? Is there still more to come?
Antonio Cairoli: I think there is still more. In the sand the problems with my neck and arm are more visible than on the hard-pack. For sure I am feeling much better than I did in Qatar but the balance and strength between both of my arms is not right. I think it will be okay soon, after five or six times training in the sand after Thailand I was already feeling better each time. I think Valkenswaard has come too soon but it will be at a good point for Argentina [round four].

Were you quite worried then about getting into the sand after Thailand?
Sure because I like sand and normally feel very comfortable in it but it is so important to have good strength and feeling with your body. I hope soon the problem will be gone. When I broke my arm last year I was riding and compensating a lot with my right side. I got to a stage in training when everything was okay and then I crashed again on the left side! So I had to rehabilitate again.

The pre-season injury has finally turned out to be quite complicated.
Yeah, sometimes it feels like breaking a bone can be better than squeezing a nerve. It is something you cannot control. You are okay day-to-day and doing normal things but then on the bike you need that muscle and feeling and strength. It is worse than dealing with pain on one particular spot.

After many years of wins and titles was the crash, injury and ultimately the way to deal with it another lesson for you?
For sure. I have dealt with small injuries before but the one last year turned out to be pretty big and I had to adapt my riding and couldn't do what I wanted on the bike. Then I just had to stop [competing] because it was getting worse. This year I was feeling very good until the [pre-season] crash and then it was difficult to get in shape before the first GP. Overall I was happy with a 5-5 in Qatar because I came to Losail after just one week of riding. The biggest change is having to wait so long for things to heal and get back to normal; I think after this race we’ll be getting there.

It is already looking like a strange championship: Desalle has been injured, Paulin is out, Gajser has won...
That’s motocross! We’ve seen injuries every season for the last couple of years and for sure this is a shame for the championship story. The best thing would be to have more riders at the top but we only seem to manage two or three a year and it is very difficult for those that are hurt to catch-up. It would be great if the standings were closer.

"I don't think so."
- Cairoli when asked if this would be his last contract.

Do you think Grand Prix maybe needs to switch to one televised moto (keeping two for the weekend program at the track) to reach a larger audience? Having four races and almost four hours of live transmission is a tough ask for potential new fans.
I think this also. You cannot really sell the product well for TV. It is quite long for live broadcast and I don't think people like to sit down all day and watch that. For the future if we want to improve and get the sport on a different level then the single moto is what it takes for the sponsors and TV. You see the same passionate people for the sport at the tracks and I think it is difficult to find new fans. Something has to change. I’ve been racing GPs for more than ten years and I haven’t seen that big change that I wish would happen. Youthstream is doing well because ten years ago motocross was not what it is now but media-wise is still does not that huge impact. Twenty years ago MotoGP was also not what it is now; whereas [now] it is maybe close to F1. I know the older generation might not like the change but the future generations need different stuff to be pulled to the races.

The big news recently involves your new contract and another two years with KTM meaning you will be in MXGP until the age of thirty-three. Was it a quick deal to make or did you need to think about it much?
It happened quickly because I have 100 percent trust in KTM. I know we still have a lot of good days and races to come. I still feel I can improve. I can still run at this level. KTM were the ones that believed in us some years ago. I had some other offers for 2017 and the future but you have to look at the people and not things like the money—you might go to another team that offers 200,000 euros more but after one year your value might drop and you end up losing that money and more. It is important to feel good with the people you are working with.

So you didn't need to confer and confide in people around you about your thoughts and decision for the new contract?
Nobody, because it was already in my mind what I wanted and my relationship with KTM is already known and trusted. They know well what I can do and what I have done. Those titles were won with the 350 and a bike that nobody trusted in the beginning. I think—because of me—the USA team had the push [to exist] because they saw the kind of results we were making in Europe. I’m happy there is a story and small legacy there but I’m not hung up on it. I’m helping a few young kids in Italy at the moment and I would be happy if one day they turned out to be better than me. I’m not thinking, “Okay, I have eight titles; I must get nine or ten.” I don't care. My time will finish.

But it won’t finish yet and people assume you want to go for the Everts’ haul of ten titles.
I wanted to sign for even longer! It is not that I agreed to two years to go for ten [championships]. It is about knowing I can be at the top level and still improve my skills. Maybe it will be two years and then another two. I’m not thinking to stop at the moment. I have to say I am really happy with my contract and KTM always helps me with any requests—like helping the young kids—and with things that we don't really need to put in a contract. With many other brands you cannot do things like that. This is what I like about KTM—there is that family feeling.

So this is probably not the last contract?
I don't think so.

People can maybe again compare you to Valentino Rossi when it comes to longevity.
Yeah! I saw Valentino signed for another two years in MotoGP and I know he is also motivated to improve. He is a bit older than me—seven years in fact—but MotoGP is not motocross and not quite as demanding, so…why not?