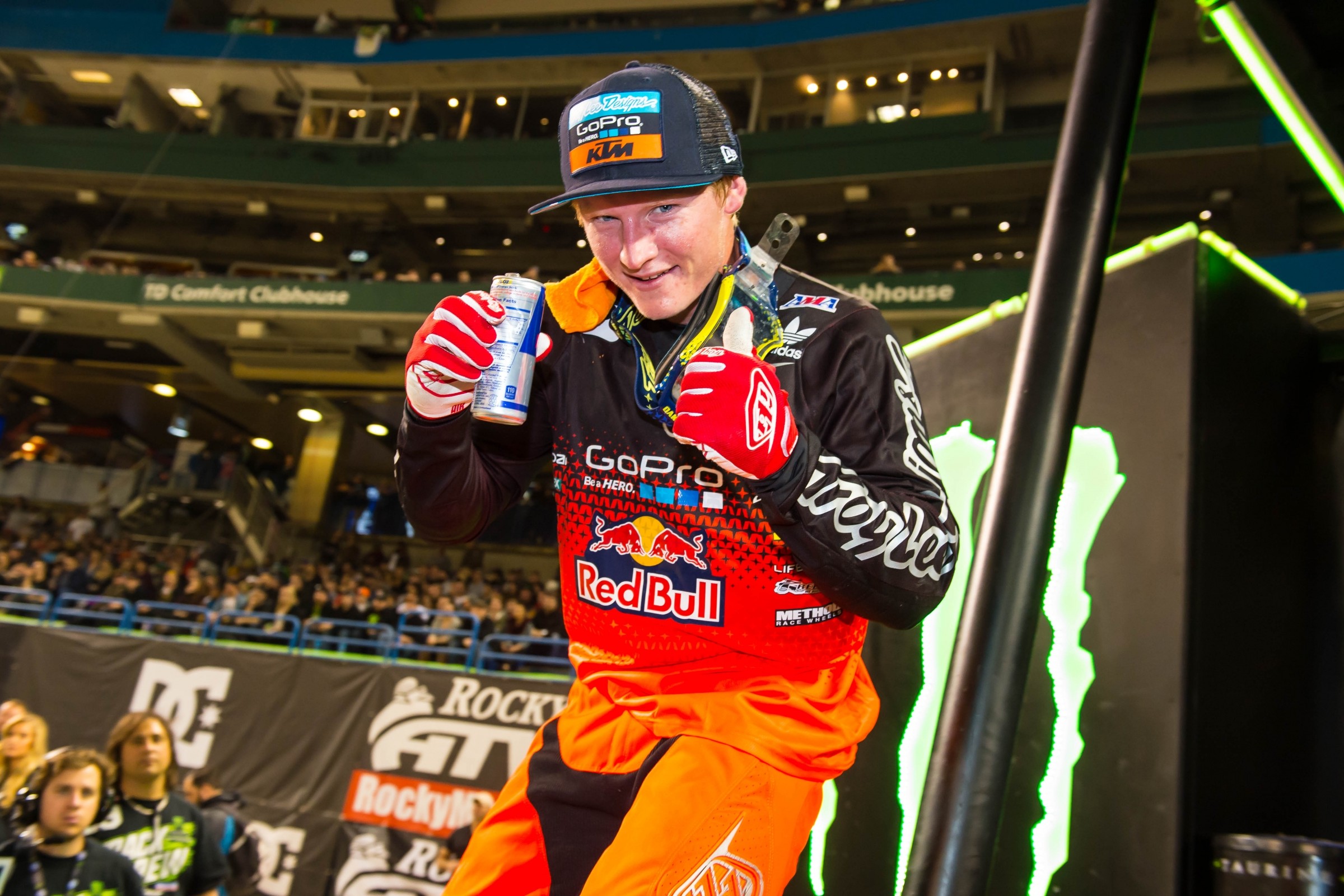 Justin Hill hadn’t won a supercross since San Diego in 2014, and is bouncing back off of a 2015 season littered with injuries. Considering that, you think he’d be bouncing off the walls after winning Toronto’s 250SX East Region race, but instead he’s focused on a much bigger prize—the title—and won’t let himself go until he gets there.

Hill’s been very fast this year, but had to come from behind at the first two rounds. In Toronto, most of the top contenders were down in turn one, so Hill was free to cruise to a win. Is this the first of many this season?

Racer X: How does it feel?
Justin Hill: It’s a good feeling. Obviously it’s still real early. We’ve got a lot of races to go. We tightened up the points, which is exciting for me. I’ve never been so close to the championship. Obviously it’s a huge step forward from what I was up to last year, being healthy and getting excited to race. I had fun and winning’s fun. We just need to keep doing that. The bike was really good today. We’ve had a good setup all year, but I’m a guy that likes to get a good setting and run with it and they allowed me to do that. The bike doesn’t get shaken up in different situations, which is very beneficial to me because I don’t necessarily like to change the bike a lot. So very, very excited.

Have you changed it since the first two rounds?
Actually the only thing we did was at Daytona we dropped the front down a little bit, brought the forks up, dropped the front down because it was Daytona, because it was rutted. And then it worked so well on everything we were like, hey, you want to just keep it? I was like, why not? Let’s just keep it. The only adjustment we’ve made since then is just slowed the rear down a little… Just minor little things like one tweak here, one tweak there. So definitely very happy that I don’t have to make these big, giant changes. The bike’s always good.

What’s cool is you won here and it’s been almost two years since your previous win. But you’re not bouncing off the walls like, “I won!” You’re like, “Okay, this is a championship.”
I was very excited. When I came around the last lap I’m pointing at people and enjoying it. I was taking it in. It was an awesome experience. It’s been a long time since I’ve been up top so it was awesome. But for sure, my mind is set: I’m not going to be happy until I have the red plate, and then until I keep it. So until that day comes, then you can see me smiling all day long. When that happens and then I have the big bike, I’ll be smiling. But I want to win this thing. That’s the plan.

Already talking about the big bike. You’re thinking long term here.
I’m thinking long term for sure, but this is here and now and the only thing we can do to attain that is more nights like these. Some good starts and just keep mixing it up with these guys. I was very excited about tonight because I cruised to that win, and just relaxed out front and didn’t lose any time while I was just cruising. So I feel like I could have dropped the hammer at any point and made up tons of time. I was just out having fun. So that’s a huge confidence booster for me. I maintained a giant lead very easily. But moving forward I’m very excited. I think I have room to grow and I have room to push it. I don’t have a very aggro style, I am told. So when the going gets tough and the track gets tough I have a bit of room to work with, and that’s more true than ever this year now that I’m comfortable and healthy and I’m ready to roll.

Talk about last year real quick. You must have been in the dumps.
Yeah, for sure. Last year I just smacked my noggin. That’s a huge thing because that can change a guy. For me, I just lost the fire. I lost the reason why I do this. I just lost the desire to go out there and throw caution to the wind and race my dirt bike how I grew up doing it. But now it’s such a big relief for me because I’m having so much fun mixing it up out there, motoing down. It’s a blast to me. I longed for that feeling. It’s been a long time.

Where was your confidence coming in to Atlanta? You rode awesome at the first two races, coming from the back, but did you need those first two to build to this? Or could you have just won at Atlanta if you got the start?
If I got the start I think I could have just ran with it. But for me, this is my fourth year racing supercross and it doesn’t exactly show it because I’ve really wasted two of those years. My rookie year I wasted it getting hurt and exiting early, and last year I wasted it with injuries and sicknesses and what have you. So I wasted two years, so four years doesn’t necessarily explain my experience. I definitely needed a couple stepping stone races, a couple times to get warmed up and get into the flow, but I would have loved to just run away with Atlanta and grab the red plate and never give it up. But this is motocross; anything can happen. In Atlanta, I happened to go down in the first corner, and I was way back, because no one else crashed! They were all up! And I still got up to fifth. That was great. That was a triumph. I felt awesome. But the difference is we just kind of cruised to it tonight. It was good. I’m excited about what’s to come.