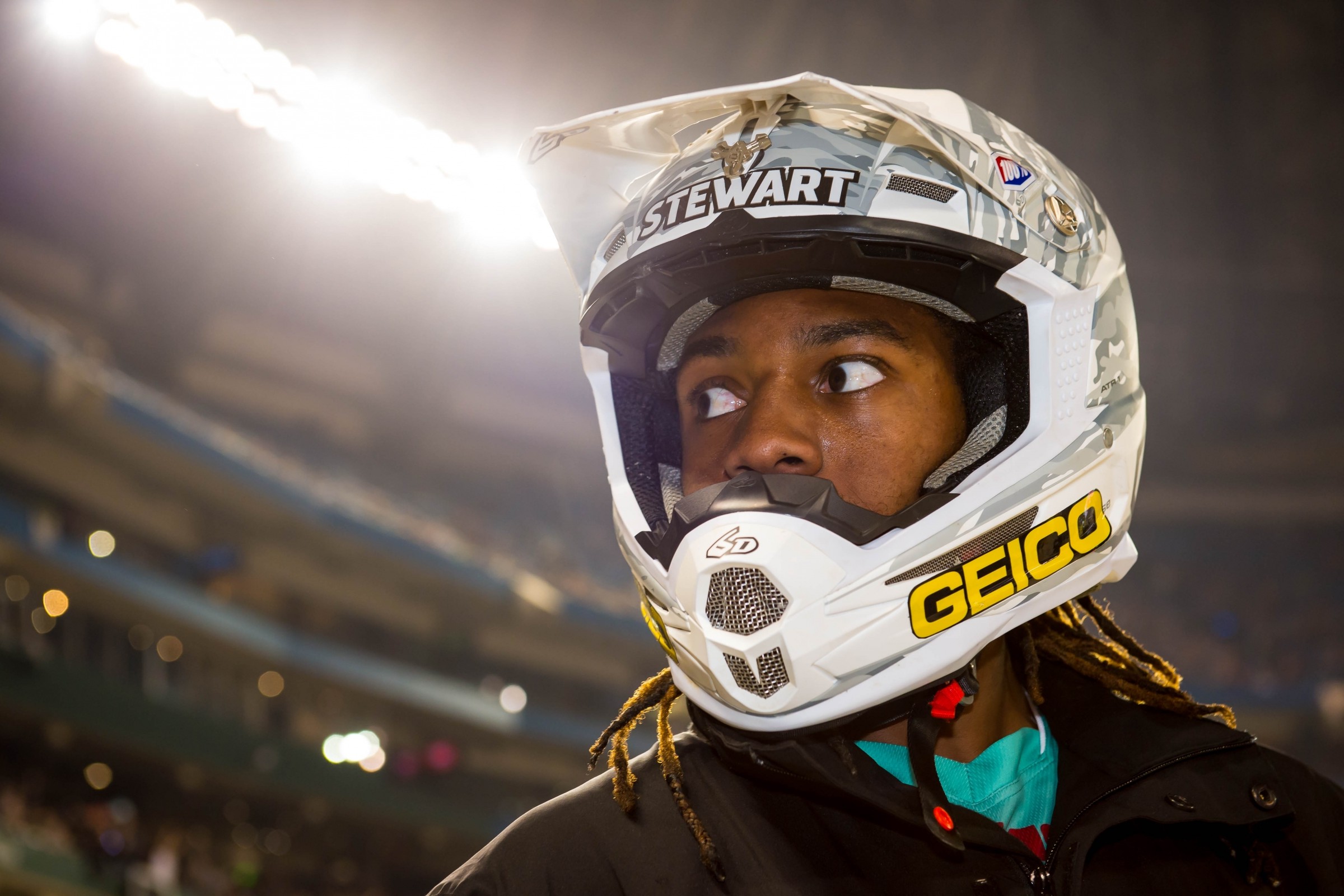 GEICO Honda’s Malcolm Stewart ignited a massive first-turn crash in the 250SX main event and ended getting the worst of it—slicing up his bike and himself. It took two trips to the mechanic’s area to get the bike to run right (the team reportedly had to cut off the kill switch) but despite the two stops, Malcolm still charged from twenty-second to sixth to salvage major points—he’s down ten and sits third in the standings. We found him in the GEICO Honda truck after the race.

Racer X: That was pretty gnarly.
Malcolm Stewart: Heat race started out great. Got the win, so I made some money….

You get bonuses for that?
Yeah! Pumped on that. Main event, me and [Tyler] Bowers were coming in. I made a mistake. We wanted that first turn and I just clipped him.

Who hit you? Do you even know?
To be honest, I don’t even really know. I’m pretty sure I hit Bowers. But we’re buddies. I walked over there to the rig to make sure he was okay, because he went down pretty hard on the last lap. Overall I’m happy. The team did the best we could. From that fall I tweaked my bike up pretty good so I had to come in twice just to re-tweak stuff back in place and things like that. I can’t be too bummed out, just because I know that it could have been worse. But coming back from twenty-second, to sixth, I’ll take it. I’m ten points back, six races to go.

Everybody’s going to have a bad race. To be honest, I felt like that was the best I ever rode in a very long time. Even Atlanta getting second, I felt like that wasn’t my best. Daytona I was leading but I felt like that still wasn’t my best. Tonight showed that I was riding off of heart. I want to win. I felt like if anybody else was in that same situation they probably would have just been pissed off and went back [to the team truck], but I didn’t. I pulled in the mechanics twice. I can’t thank GEICO enough for that. Those guys, Josh and Adam, to help me out there, fix my bike up, tweaking stuff back together, and me getting back out there and salvaging some points. They’ve got my back. We’re not done. Six races to go, it’s going to come down all the way to Vegas. I’ll do the best I can to get that number 1E.

When your bike was twisted up, your jersey was all torn, maybe you’re banged up, did you ever even think about when you went into the mechanics, “I’m done?” Or were you like, “I’m finishing this thing?”
No, not at all. I was not giving up. The thing is I work too hard to give up. There’s no chance in heck I am coming back to this pit. Unless that motorcycle cannot run, I’m not coming back here. I worked too hard in the off-season, and the team knows that I want to win. They know. If anything they came back with smiles on their face just because they know that you rode like a champion. That’s what’s going to get you wins. Once you get the ball rolling there ain’t going to be nobody to stop you. That’s my positive energy leaving this. Get a win in Detroit, regroup, and go from there.

How about the torn up jersey? Did you even realize? You looked like you were beat up. I don’t know if you were hurt.
I’m a little cut up. Anytime you go down in the first turn things can happen… [RJ] Hampshire’s tire definitely ate me up. Those Dunlops were working! It is what it is. It was my fault. I wanted it. I think me and Bowers just clipped. It’s a racing incident. I did the best I could. Coming back from that, I’m pretty sure if I didn’t crash off the start and the way I rode, the way the race worked out I probably would have won it. So whatever. It is what it is. Everybody’s going to have a bad race, and that was my bad race. Got the monkey off my back now, so let’s go win some races.