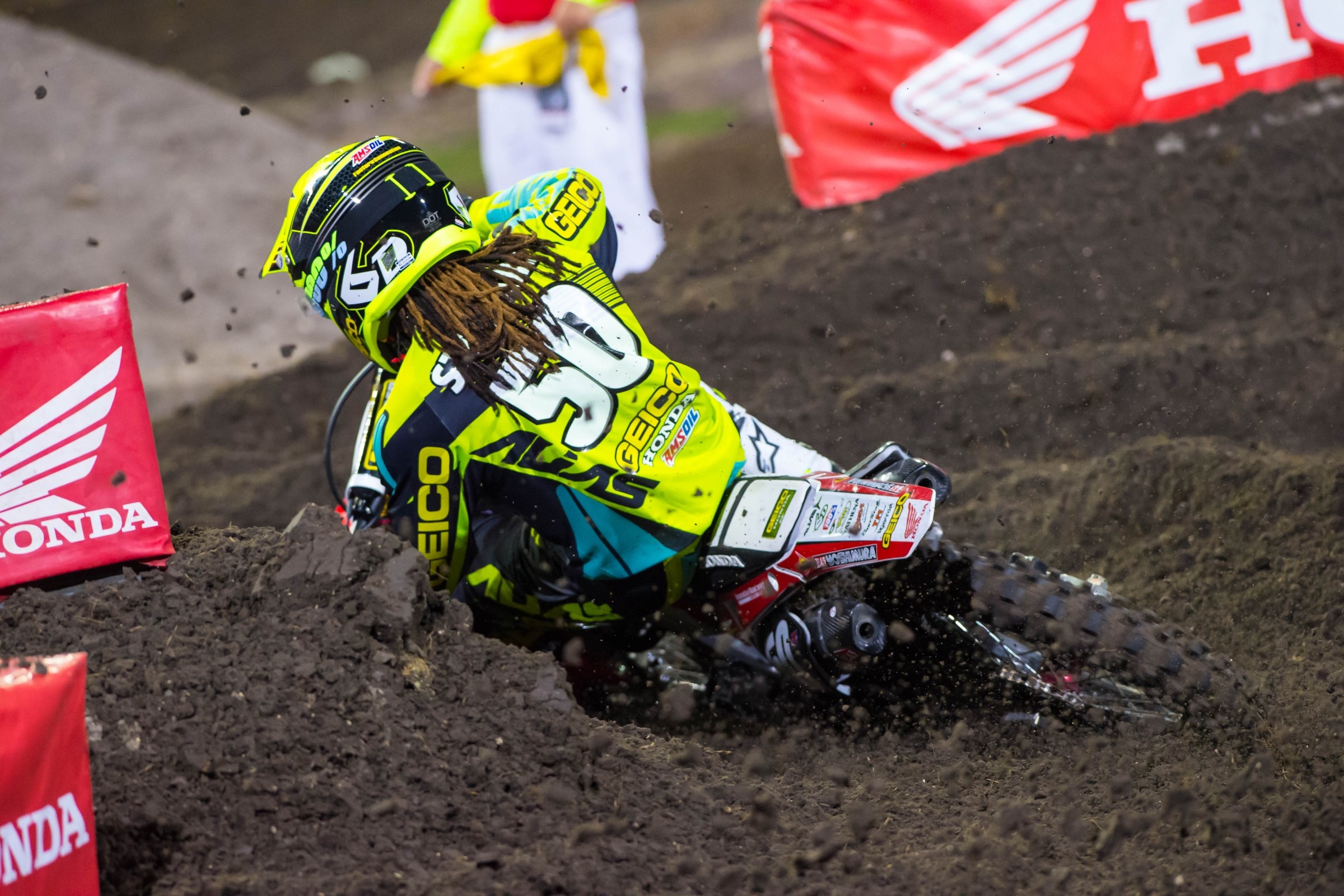 How good has Ryan Dungey been over the last two years? Try twenty-five straight podiums and twenty-straight finishes of second or better good. With a podium this weekend, Dungey will pass Chad Reed (25) on the all-time consecutive supercross podium list. Dungey also gained more points in the championship and leads Ken Roczen by thirty-nine through nine rounds.

Honda HRC’s Trey Canard had his best finish since a fifth at San Diego. In a statement, Canard admitted that the way his season has gone thus far, a top ten is a turn in the right direction. “Today was better, but I still didn’t finish where I would’ve liked to. All in all though, I think it went pretty good and I’m happy to finish inside the top ten and be leaving healthy, considering the season I’ve been having. I wasn’t a huge fan of the track, and I don’t think many guys were; it was just too tight and there wasn’t a whole lot of room to make passes. I can’t complain too much because we all had to race the same course.” Canard’s sixth was his fifth top ten of the season.

On the first lap of the main, Marvin Musquin and Christophe Pourcel collided and Pourcel went down, causing a big traffic jam. Two riders, SmarTop MotoConcepts’ Mike Alessi and Honda HRC’s Cole Seely, ended up down on the ground. Seely had to work his way from twenty-first to tenth on a tight track. Since a fourth at Arlington, Seely has back-to-back tenth place finishes. “I was able to charge from twenty-first to tenth by the end of the race, which was good but definitely a challenge since this track wasn’t great for passing.”

After missing the last four rounds with severe inflammation of his shoulder socket, Blake Baggett returned for Daytona and finished thirteenth in just his second main event of the season. Baggett admitted that his lack of time on the bike played a factor. “I just started riding on Monday before the race, so it was about four weeks since I’d been on the bike,” he said in a statement. “I rode Monday, Tuesday, Wednesday and Thursday and then showed up here. I had pretty good starts. I had the speed, but just faded. It’s a good start. I’m coming out of here healthy and now I’m jumping into the season at the halfway point. I’ll try to build from here. Each week I hope to get more time on the bike and gradually get my fitness back.”

Since his win in Arlington, Ken Roczen has struggled with his starts, leaving him with 6-5 finishes and more lost ground in the points chase. ”Definitely not what we were expecting,” he said in a statement. “I didn’t get the best jump. I actually got pretty lucky in the first turn but I couldn’t do the triple because I didn’t think the person in front of me was going to do the jump, so I ended up not jumping. The track was tough so it was hard to pass. By the time I had a clear track, there was a big gap to the front that I tried to close but I just ran out of time. We’re going to work on the bike a little bit this week to try and get it better. Other than that, I’m going to keep dong what I’ve been doing. I felt really good fitness-wise.”

GEICO Honda’s Malcolm Stewart led twelve of fifteen laps on Saturday night before being passed by eventual winner Jeremy Martin. Stewart lost second to Justin Hill shortly after and then stalled with a corner to go, giving Martin Davalos the last podium spot. “In the main, I led most of the laps but I got tight,” he said. “Pretty bummed about the main but I have a lot of races to look forward to and I’m looking forward to being on top!” The good news for Mookie? He’s only down five points on Davalos with seven rounds remaining.

Yamalube/Star Racing Yamaha’s Aaron Plessinger wrote on Instagram yesterday that he dealt with the flu the week prior to Daytona and was only able to ride on Monday. He still managed a fifth and is only nine points back of Martin Davalos through two rounds. “Well this weekend was really tough for me being that I had the flu all week and only rode Monday but still gave it my all and I'm happy with a 5th!,” he wrote on Instagram. “Just gonna have to work hard this week and come out swinging in Toronto.”

RJ Hampshire, who is making his way back from a serve head injury this off-season, was impressive in a heat race win in front of his hometown crowd. A bad start (which was a major point of emphasis on this track) and a mistake early in the main relegated him to seventh. “Was feeling great coming into the main, but I didn’t get a good start and then on lap three or four I cased a jump and blew my hand off the handlebars,” he said in a statement. “I was in survival mode from there, riding in a lot of pain, so I tightened up. Certainly not happy with seventh but looking to bounce back next weekend in Toronto.”

Following a crash-filled opener, Monster Energy/Pro Circuit Kawasaki’s Arnaud Tonus got things running in the right direction at Daytona with a sixth place finish. “Today was a huge improvement,” said Tonus in a team statement. “I felt a lot better on the bike and I believe I proved that in both the heat race and main event. I was able to push for all 15-laps and made some great passes. It feels great to be able to ride like I know I can.”

Troy Lee Designs/Red Bull KTM’s Shane McElrath continues to deal with a wrist injury that sidelined him much of the off-season. McElrath rounded the first lap in fifteen and came back to tenth, but admitted it’s hard to return from injury. “Coming back from injury isn’t easy, but I’m trying to improve each week and I think that I’m growing and learning each race,” he said. “We’ll take it race by race and hopefully I’ll see my results improve with each passing round.”

Privateer Dakota Alix was off to another impressive start, running inside the top six for a majority of the main, before a late crash on the dragons back forced him to fourteenth. Although Alix was able to finish the main, he wrote on Instagram that he sustained a broken collarbone. “I had a great night going for me in Daytona running in 6th place with just about a lap and a 1/2 to go in the main event then unfortunately had a crash in the dragons back and broke my collarbone.” We’ll have more on his injury later in the week.