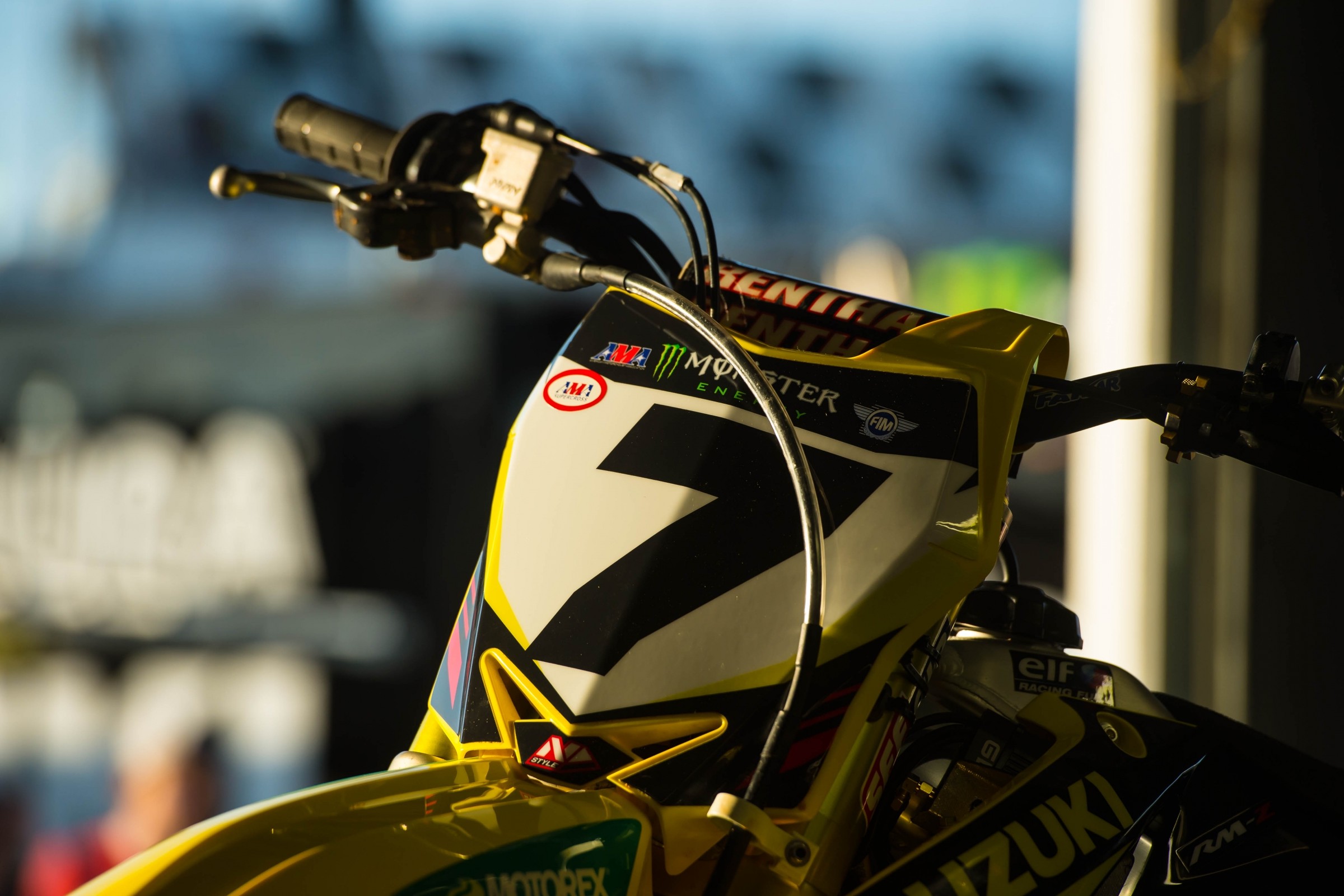 James Stewart had another tough day at the office on Saturday. His racing world has been full of tough days lately, though. Going back to his sixteen-month suspension, seemingly everything he has tried has gone sideways—barring Red Bull Straight Rhythm last October.

He had missed the previous three rounds leading up to Atlanta’s controversial fourteenth place finish. The silver lining for Atlanta was that he did all 20 laps and finally put in some sort of result to build from. Now, sitting here days after another disastrous weekend in Daytona, he has to be wondering what in the world is going on.

The way I see it, though, all of the current troubles can be attributed to what went on several months ago.

Coming into October’s Red Bull Straight Rhythm and the Monster Energy Cup, there was a ton of hype for Stewart’s return. James is second on the all-time AMA Supercross win list and arguably the sport’s biggest star—even a year removed from competition. I, along with many others, expected Stew to be incredibly motivated and if anything, over prepared for his return. After all, he had been forced to miss more than a year of racing and with so much time to prepare, he should be as close to 100 percent as we have ever seen him, right?

It doesn’t appear that was the case as James looked rusty and if anything, was actually overweight for the first time in his career. At the Red Bull event, it didn’t seem to matter. With the event’s short nature, it’s understandable why he looked like the same old James.

At the rival Monster Energy Cup event the following weekend, his rough edges were more apparent. Watching him in practice, he just didn’t look like the same James Stewart I have watched for fifteen years. He was casing jumps, making mistakes and generally just looked “off.” His weight was a telltale sign that he hadn’t been training to the level that most people expected. He looked like a shell of his former self. In the first race he would go down early with injury and disappear for the night.

Leaving Vegas, I assumed there was a plan in place. He would have ten weeks before Anaheim 1 to turn this ship around and come out swinging when we arrived in Orange County. He could shed that weight in a “boot camp” that most of the racing elite undergoes in November and December. He could find his razor sharp form in those weeks and months. He had time to do it and I really didn’t put much thought into any other option. I thought his poor showing at the MEC could actually be the catalyst for a big pre-season effort and subsequent high level at the season opener. The key words in all of this were “I thought,” because none of it came true.

A month after the Monster Energy Cup, James flew to France for the (formerly Bercy) Lille Supercross. James is a worldwide superstar and draws a big crowd at an event like this. He also commands a hefty price tag so the promoters are depending on him to show up ready for a show. He had a few weeks of work by then so I was curious to see if James knocked any weight off yet and how his skills were coming along. Talking to people at the event, he still seemed to be fighting the rust and lack of James-like confidence we typically see. He wasn’t the fastest rider in practice—a specialty of his. He wasn’t jumping this quad that others were—another specialty of his. Strange things to be saying about James but it simply showed he wasn’t prepared like he normally was.

He would end up crashing in the first race of the night, the exact same scenario as Vegas just weeks earlier. This time he would injure his lower leg and miss the rest of the weekend. The injury also forced him out of a race in Australia he was previously billed for. It was a big blow for promoters and fans alike but maybe even more so for James. He needed these races and the seat time that would come along with them. He needed to race himself back into that superb level and keep working all the way until Anaheim. He couldn’t afford to take any more time off, couldn’t afford any more down time, couldn’t afford any more setbacks.

Were we now at the point where James could be entering the long awaited 2016 season behind? Tough to swallow if you’re a fan or on team Stew. That’s exactly what happened, though. At Anaheim, he wasn’t the Stew that many hoped would arrive. He wasn’t able to get in the needed work because of the injury sustained in France. It was another hurdle in a never-ending barrage of hurdles.

Now, as we sit over halfway through the supercross season, we have seen James suffer another concussion at the first round, pull off in Oakland with post concussion symptoms, embroil himself in the Atlanta lapper-gate discussion, and fall victim to another big crash at Daytona.

Where does he go from here?

Sadly, I don’t think there is an easy route to take. My honest diagnosis would be to stay home and ride, ride, ride. He doesn’t look like himself out there and that’s simply a result of not riding enough. Even when he turns it up and tries to do James-like things, it is very close to disaster. His rust is evident all the way around the track. He still knows how to go faster than maybe anyone, but his reactions aren’t on par with what his mind wants his body to do.

The good news is that all of this is fixable. The bad news is that it won’t happen overnight. He will need time and uninterrupted training both on and off the bike to find his old self. His potential level is still very high, but only if he is firing on all cylinders.

To think he can snap his fingers and be the “Fastest Man on the Planet” would be foolhardy to even the most diehard of fans to believe. Those dominating performances and wow moments all came from incredible amounts of work and dedication behind the scenes.

The James Stewart we all watched with jaws dropped was no accident. It was hard work and thousands of laps personified. To get back there, it’s going to take longer than anyone wants. To think otherwise would be an insult to not only the level that he is capable of but also to the other elites in the 450 class. Riders like Ryan Dungey and Ken Roczen have been working nonstop to up their game in James’ absence. To close the gap, it will take a massive amount of work.

Personally, I hope he is up for the task. Much like when Chad Reed is at his best, the sport is simply better when the legends of the sport like James are pushing new levels alongside “in their prime” stars like Ryan Dungey and tomorrow’s stars like Cooper Webb.

Heal up, get to work, and wow us again, James.