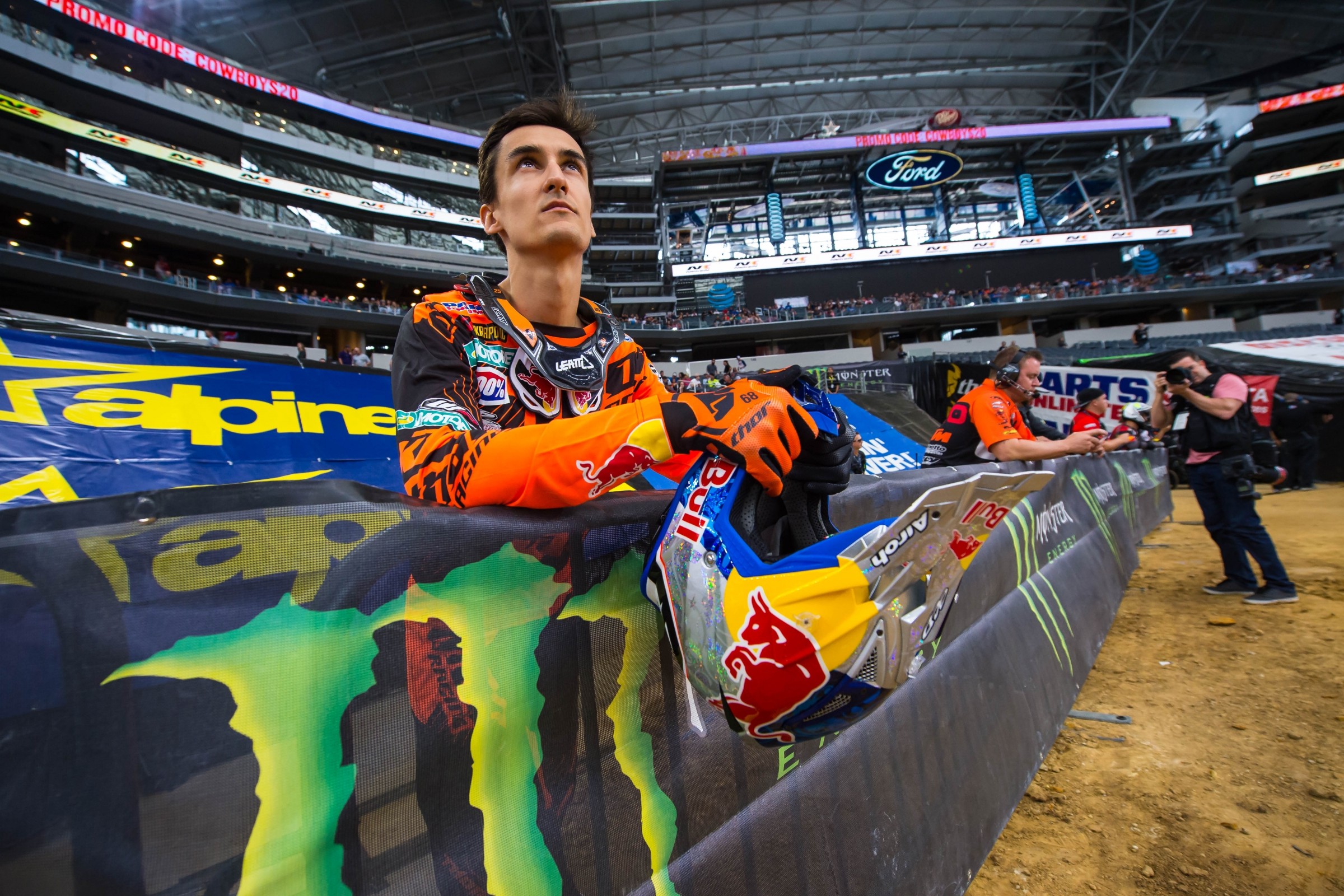 Red Bull KTM’s Marvin Musquin ran the race of his life for 19 laps at the Georgia Dome, holding defending Monster Energy Supercross Champion (and his training partner and teammate) Ryan Dungey at bay as the white flag came out. Then Musquin came up on lapped rider James Stewart, which slowed him just enough to where he could not jump a triple, but Marvin tried to jump it anyway, cased it, and handed the lead and the win over to Dungey.

Marvin was absolutely gutted after the race, but we gave him thirty minutes to collect his thoughts inside the team truck. When he came out, he was happier, but also knew this as the one that got away.

Racer X: How are you feeling?
Marvin Musquin: [Long pause] I’m feeling bummed…but when I think about the whole race I’m happy. Kind of like 50/50 feeling. It was a great main event. The start was good. I was pushing hard and I was feeling great. I was doing some good laps, and then obviously I knew it was Ryan [Dungey] behind. I had some good lines. Like Frankie [Latham, mechanic] used to tell me, he says, “Just try your best and if you get tired, you get tired.” I tried really hard! I was actually thinking, just try and we’ll see when Ryan is going to pass you, because you know it’s Ryan Dungey behind you!

I know Ryan really well. He’s a really clean rider. I knew he was not going to take me out or hit me to pass me. We have a lot of respect for each other. But still, I was like, “When is he going to come inside?” Obviously I can’t see behind, but I was actually doing good in some of the sections, especially the whoops. I didn’t know until right now when the team told me in the whoops I had good speed. So last lap… I got close to James Stewart. He was a lap down. On the straightaway by the mechanics area, he actually looked back, so he saw me. I revved my bike to tell him, “I’m here, please let me by. Let me do my last lap clean.” I was behind him in the whoops. Obviously he was in the main line, and he turned really tight inside to let me by, and I was missing a little bit of speed going to the triple and I still went for it. Cased the triple so I slowed down a lot, and then I heard him coming because he was still riding and doing his race behind me. I kind of got scared to get landed on by him. I changed lines and I got so out of control. Feet off the pegs, hit my chest going through the dragon back with no feet on the pegs. I was like, “There we go, I’m down. I’m crashing.” I saved it, went off the track, and I knew Chad [Reed] was behind but not that close. So, let’s get safe, back on the track, and get second. But tonight for me second is not good, because I feel like I had it. But when I look back, second is my best result and to be leading 19 laps in front of Ryan it was great.

So Frankie says go as hard as you can and get tired. Were you tired?
Well, I try hard and then if you get tired it’s okay.

But were you feeling good?
Yeah, my heart rate was high! I was pushing! Like I said, right now obviously every single rider, the goal is to win and be the best. But to be honest and to be realistic, at one point you’re like, “Ryan Dungey is going to pass you.” But I tried my best. Frankie showed me six laps to go and I was like, “Hey, that’s not a lot.” It was obviously short lap times and it was a shorter 20 laps compared to the weeks before. So from then I tried to be consistent and not do mistakes and push hard. I’m really happy about myself, until I got close to James Stewart. I kind of want to get mad at him and not get mad at him because he is doing his own race. It’s difficult to accept right now, but at the end we’ve got to move on, always.

You said Stewart was sticking to the inside after the whoops. You think he was actually trying to get out of your way? Or was he just taking his line?
The thing is people said he looked back on the straightaway. I just feel like he kept going at his rhythm and at the same time we would have passed him. But I don’t know, I’m not in his head. I don’t want to talk too much about it. I don’t want to use this as an excuse. I don’t want to blame him too much. He’s a great rider and he’s having a difficult time right now obviously with injuries and stuff. At the end I should have been safer and maybe smarter and just went double instead tripling. But that was the fastest way so I went for it. I gave 100 percent. So that’s why I have no regrets.

The track was cool because, you and Ryan had a lot of different lines and they were working out about the same. You didn’t even do the triple-triple, instead you went triple-double and then singles out, jumped onto the dragon’s back. It was working.
But I think I should have went three-three. I did it once and then I just changed it and stuck with it. It was kind of safer for me, but obviously when you have Ryan behind you like this… I was trying to be loose and smooth, but in some areas of the track I was a little bit tight. But when I think about the race right now I’m pumped. It was great.