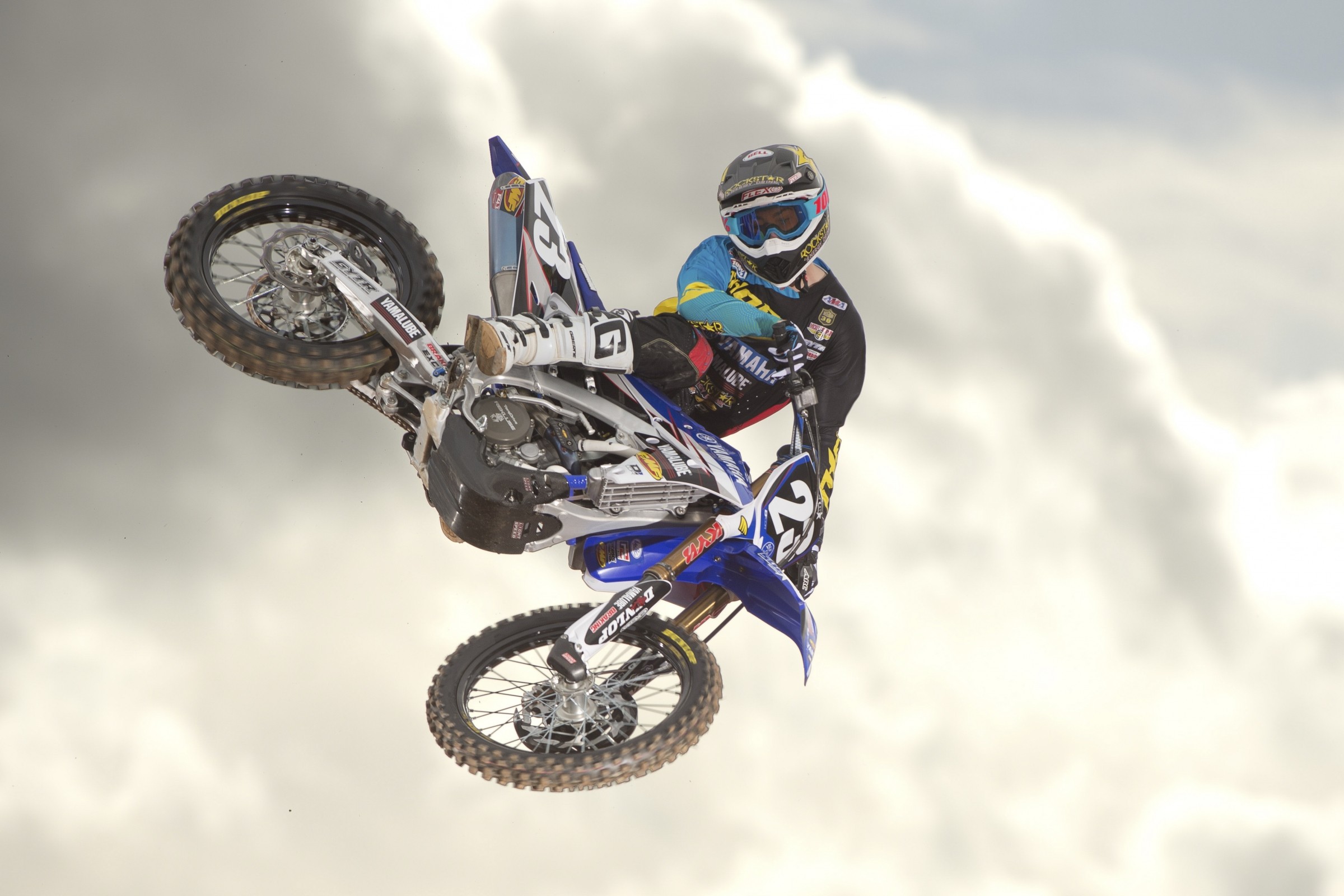 1. Jeremy Martin. Is this the year he gets it done?

Jason Thomas: I think this is his best shot at it. This year really has no clear favorite and on paper, he looks to be the veteran and most accomplished of the group. He is a two-time Lucas Oil Pro Motocross Champion and that is nothing to overlook. He has beaten all of these guys soundly outdoors so there’s no reason he can't find that mental edge in supercross. He has won events before, including this Atlanta round last year. If he can start strong and avoid the troubles (see: not qualifying) that plagued him in recent years, he will be in the mix for a championship.

Steve Matthes: By "done" do you mean championship? I don't think so. If you mean "done" as in, win races, be a consistent top three guy and qualify for every race? Then sure. JMart's got to be better in supercross than he has been, it's that simple. The importance of supercross demands that he get better at it if he wants to make big money down the road. It's amazing really. Not since the #800 and maybe Doug Henry before have we seen such a disparity between a rider’s indoor and outdoor skills. I think Jeremy will be better than he's ever been but I still find it hard to pick him for the championship.

Jason Weigandt: I think he can get it done, and yes by “done” I mean the title. But Jeremy will never be as good at supercross as he is outdoors only because his greatest assets are his incredible speed in rutted corners and his fitness and desire. Those are good qualities for supercross, but they help more in motocross. There are times when JMart goes through a deep, nasty, rutted corner in the nationals and it looks like he's in fast-forward. Awesome for RedBud, doesn't apply in the Georgia Dome, which stopped having gnarly ruts ten years ago.

That doesn't mean Jeremy can't be great in supercross, in the same manner as Ricky Carmichael became great, but was always even better outdoors. Johnny O'Mara really helped Carmichael's supercross technique, and Martin started working with Johnny last summer. O'Show told me he had similar plans to remake Jeremy's style for SX. Also, last year Marvin Musquin was as good as good can get on a 250F indoors and JMart took it to him one night in Atlanta. The ability is there deep down inside. He also has much more experience winning races and titles than anyone else in this field.

Yeah, he’s had this strange propensity to not qualify for main events but I think he's past that. It's very hard to judge the riders until we see them on the track together, but I'm penciling him in as my favorite until I see otherwise.

2. Struggle in the west for TLD's first year as KTM's exclusive factory team. Can McElrath and Hill carry them?

Thomas: Well, it hurt to lose Jessy Nelson (obviously). He was a bona fide title contender and without him, the team lacked horsepower. Mitchell Oldenburg has improved and is turning in respectable results but Nelson was their hope for wins. On the East, they are basically in the same position as they were entering Anaheim 1. They have riders who can contend for wins but they will have to step up and turn in their best. McElrath will be solid but the real question mark is Justin Hill. Last season, I expected him to be a title favorite. He was incredibly fast at times, winning heat races and looking to be on the podium every race. Things just unraveled during the main events and he wasn't able to consistently put it together. I expect him to be fast right from the green flag on Saturday afternoon but how he manages the main events will of course determine his supercross season.

Matthes: Justin Hill is perhaps the biggest question mark on the East . A former winner, his season last year wasn't very good (although he had a big crash before the series) but he showed a ton of speed. Something to think: this is TLD KTM's first time doing the East Region so there will be some adaption in terms of bike set-up and what have you. I've been hearing that Hill has been flying but he was last year as well and like JT said, couldn't get it done in the main events. To me, if you win heats and can't get it done in the mains, that tells me it's either lack of fitness or maybe you're a head case. As far as McElrath goes, he's coming off wrist injury, and I'm not sure how much time he has on the bike but I think he'll be solid. I'm not sure if he can win a race but a podium here or there and top fives is a good showing.

Weigandt: Suddenly some pressure on TLD after the Nelson injury hurt their chances in the West Region. Just a few weeks ago, McElrath wasn't expected to race, so although the team now says he's in, I'm sure he's not 100 percent. Hill could be the real sleeper, though. The speed and ability are absolutely there. Last year I had him as my favorite in the West. It didn't go well at all. That's the only thing that scares me—he could be good but last year was such a washout I'll need to see him get back on track before I can predict big things without any fear.

3. Plenty of other riders to talk about. The floor is yours.

Thomas: There are many riders who can win races on the East. Tyler Bowers, Malcolm Stewart, Aaron Plessinger, RJ Hampshire, Martin Davalos, and even Arnaud Tonus could all stand on the top step. I think we will see a few riders rise above the rest, per usual, but sitting here on Wednesday before the opener, it's really difficult to know who those will be. The names I keep hearing around the test tracks are Aaron Plessinger, Martin Davalos and Malcolm Stewart.

For Plessinger, he is entering year two of his pro career and it's always interesting to watch how steep a rider's learning curve is. From reports I’m hearing, he is every bit as fast as Cooper Webb at the Yamaha track and that could mean bad news for everyone else. Davalos is a long time veteran in the 250 class and if not for a bike malfunction in 2014, he would have won a championship in this very series. He is a question mark because he is very capable of winning any race he enters but crashes and mishaps have derailed his chances in years past. By all accounts he is 100 percent ready to fight this season so counting him out would be foolish. Lastly, there is Malcolm "Mookie" Stewart. Mookie is arguably the fastest rider in the class but he also has a tendency to have the big crash that ruins his title chances. If he can remove mistakes from his game, he will be a factor. I think I have more questions than answers for most of these riders but that actually excites me. Not knowing who will win before the gate drops is what makes racing great.

Matthes: Well, four rounds into the 250SX East series, Rockstar Husqvarna's Martin Davalos will pass Kyle Cunningham and retake the lead in most career 250SX starts amongst active riders. Davalos has been fighting the good fight since 2006 with great equipment/teams most of the way and maybe this season, perhaps in the twilight of his career, he can get it done. He's got two wins in ten years in the class, averages 4.6 outdoor nationals a year and has probably made millions of dollars. What a story it will be if Marty can finally pull this gigantic feat off. We're all pulling for you!

Weigandt: This season is exciting because there are strengths and weaknesses for everyone. Last year you knew that Musquin was the total package of experience/preparation/bike/team etc. but this season everyone carries some question marks. Plessinger, for example, could be incredible but it's only his second year and he's yet to even win a SX race. I assume he'll be really good but you never know. I think it's really cool that Malcolm Stewart has rounded into a title contender. He won a race last year, we know the GEICO Hondas are always good, and he seems more ready than ever. Bowers is very capable if his health is in order. Heck, every rider in this field could be really good, or really disappointing, as they're all fighting for their first supercross title. I have a feeling this is going to be nuts.