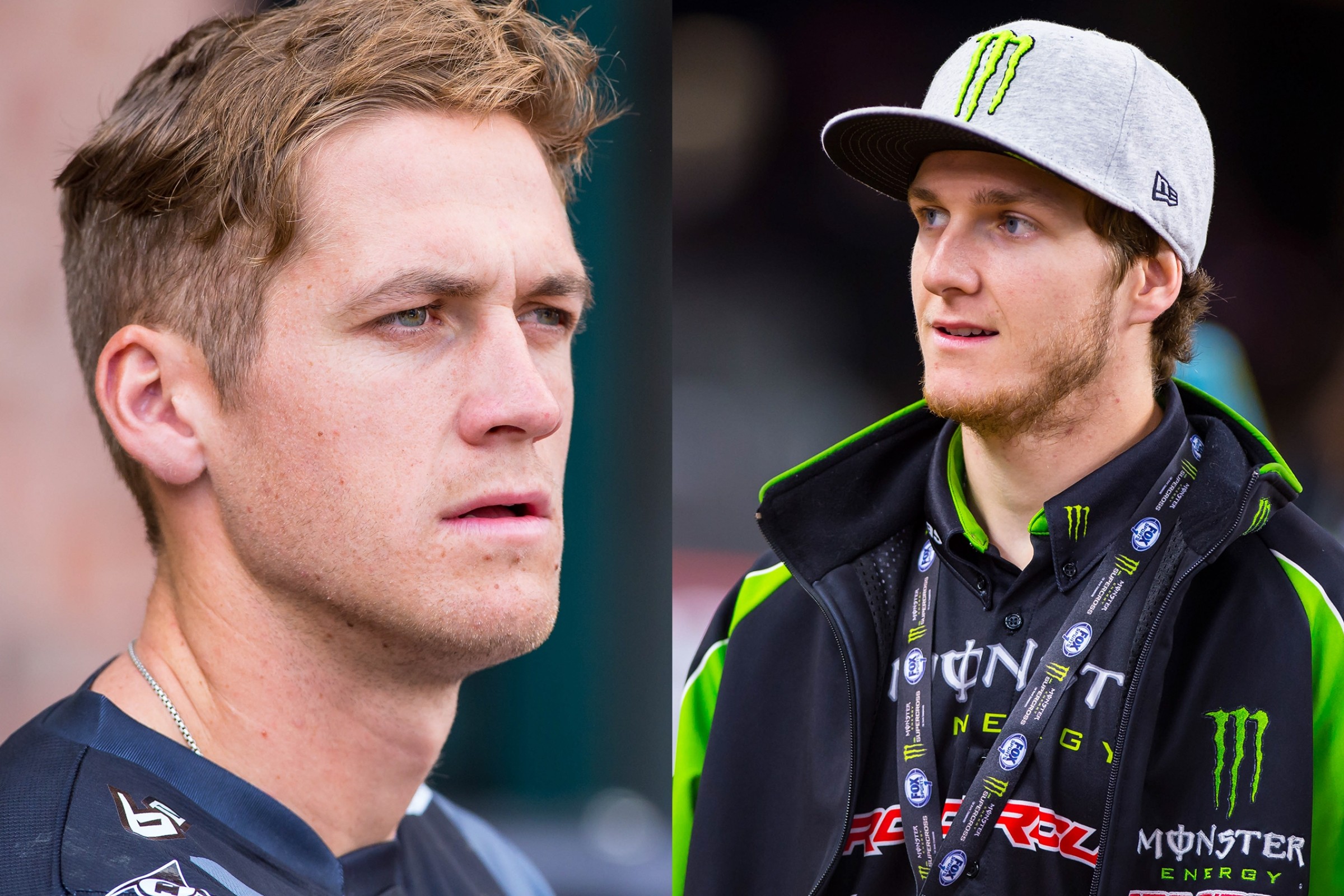 The 250SX West Region Championship chase took a huge turn on Saturday night in Arlington, when Christian Craig moved into Joey Savatgy’s line in the whoops, causing a huge crash for Savatgy. Cooper Webb later passed Craig to take the lead and the win, and also get the points lead back from Savatgy, who recovered for tenth.

The Craig/Savatgy crash has gathered its share of opinions, but we went to the sources to see what they think. We spoke to Craig after the race, and we talked to Savatgy on the phone last night.

Racer X: You must have been feeling it all day. Practice was great, the heat race was great. Seemed like it was going to be a good night.
Joey Savatgy: Yeah, I think we ended up being fastest in both timed sessions, and we won the heat race and had the fastest heat race. The night was looking good. Regardless of how it would have played out, I would have been happy with being on the box, and just being close in points. Leaving there with the red plate would have been nice, but I just wanted to be on the box. Unfortunately the night didn’t end how it started. You’ve got to just move on from it.

Well that’s an interesting perspective. You’re in a points battle and you’re feeling it all day, you don’t go into the main event feeling like you have to take advantage and win.
No, I try not to add any extra pressure. Honestly, I felt for sure we had the speed to win. But again, knowing you have the speed to win and actually putting it together isn’t always easy. We were capable of it but in the same breath I’m not going to panic if I’m not winning and throw it away. Then I would have been mad. Things didn’t work out the way they could have, but I have to be satisfied that we’re making gains every week. We’ve had some good practices, some good heat, and some good mains. But Saturday could have gone really well.

Okay, so what’s your take on what happened in the whoops between you and Christian? Have you watched it back?
I watched it back a little but to be honest with you I’m trying not to. I’m trying to let my jets cool completely and let things settle down. Honestly, I look at it like this: it wasn’t a good move on Christian’s part. If you watch the video he’s clearly on one side of the track and I’m on the other, and give or take he has maybe a wheel on me. You just don’t go from one side of the track to the other in a whoop section, you don’t do it over a jump, you don’t really ever want to do that. I think the best place to do that would be a straightaway, where the guy has room to react. But I got to that wall, I had one thing in mind, and that’s commit to those whoops. I had good whoop speed, so commit to the whoops and worry about him in the corner. It happened so fast that I got two whoops in and all I could think was, “Oh shit, I can’t stop, I can’t hit the brakes, I can’t turn.” I was already committed. At that point all I could do was try to ride it out, but unfortunately I hit the ground. I was a little banged up and the bike was a little banged up but I did what I could. At that point all I could do was salvage and get a tenth.

All in all, the day wasn’t as good as it could have been, but it could have been worse. I think you can go back a few years when [Chad] Reed hit the back of Ken Roczen in the whoops, that ended his season. So I was fortunate and blessed to ride out of that situation only eleven points down. But I also look at it like it could have been much better. A lot of mixed emotions right now. There’s nothing I can do, all I know is we have two races left and I’m going to come out swinging. If it comes down to the last race in Vegas I know I have two giants on the east as teammates, and Chris [Alldredge] is very capable of going fast, so if anyone wants to start playing games, I don’t know if they want to play games with the guys I have on my team. All I can do now is some outdoors and then stay on the supercross track and be ready.

That’s a pretty mature way of looking at this. You didn’t want to go fight anyone after this?
Trust me, man, there was a period of time after the race where I was ready to fight someone! I told my mechanic after the race, “If that guy comes over here you better get rid of him or hold me back.” I was pissed. That wasn’t cool. I’ve read a few people’s thoughts on it and they’ve said I should have anticipated it, and I get that you have to be aware, but you don’t expect someone to come over on you in whoops. You have to rely on the guy next to you riding clean enough to where they’re not going to take you out in whoops. I was heated at the time, but the way I look at it now is mouthing off on social media or something isn’t going to do me any good. I’ll catch a bunch of crap from the Craig fans about, “Oh, if Webb hadn’t had problems” or whatever, so all I can do is keep doing what I’m doing. We’re working hard, putting in laps, and putting ourselves in good positions. I’m not here to make friends and I’m not going to leave any doors open anymore.

Is it easier, because in the big picture you have taken a big leap this season, even if you don’t end up winning the title?
Yeah, like you said, compared to last season coming in hurt, this is a lot better. We had a good off-season. Unfortunately at the first round we got into it with the same person, and that’s unfortunate because I have put myself in good positions every weekend. A lot of people want to say I wouldn’t be here if Webb hadn’t had problems or whatever, but the way I look at it is, if I hadn’t been putting myself in good positions and doing well then we wouldn’t even be here to take advantage and be in the points lead. We’ve made a lot of improvements. I feel like we’ve gotten to the point now where we can beat this guy. I feel like if I had made the pass on Craig I could have tried to sprint away. It’s at the point where I feel just as fast as him, and I believe in my program, and I feel really good on the bike now. I wanted to win before and I wanted to prove people wrong, but now more than ever I want to come to Santa Clara and shut the door on a lot of people. Bottom line is there are 30 laps of points-paying racing left and a lot can happen.

Racer X: Take us through your perspective on that one.
Christian Craig: I got off to a holeshot; Savatgy got around me. He bobbled coming out and I snuck on the inside. I thought I made the pass and then I heard him coming to the left of me, which there was a left-hander coming up so I knew I had to block that inside right away or he was going to take me high. Come over that wall and I jumped into the second whoops and I moved over pretty quick. If not, I would have gotten taken high for sure. He was going for it. Any rider would have done that. I ended up taking him out. It’s unfortunate. I don’t like being a dirty rider but it’s a racing incident. It happens. I’m sure he would have cut over too. I didn’t mean to cut over as hard as I did, but you’re in the mode of racing and pass, pass, pass, so you don’t think at the time, really. It’s just like, “Get in front and get over.”

You didn’t know exactly where he was?
I knew I had a wheel on him, so I knew I had to keep that wheel on him or he was going to pull me high in that corner. Unfortunately he went down. I rode around and actually pulled a little gap on Cooper. Thought I was riding pretty good and then two big mistakes in one lap cost me. I had him come right up on me and he made the pass pretty quick. I tried to get in behind him and ride with him. Made a couple more mistakes and lost a second or two. Second, I thought I threw that one away but there’s two more rounds left.

A lot of these races you were tightening up. Was that happening again or was it just the mistakes? Were you feeling physically pretty good, beyond the mistakes?
I tightened up in the heat race. I wasn’t breathing. My breathing was better in the main. I still wasn’t my 100 percent self out there. I’d say I was riding at 80 percent. I was trying to ride mistake-free and when you do that you make mistakes. Got to get that out of the way and once I put a race together I should be up front and winning.

As far as like, the breathing was off here, or getting tight there. Is that because you haven’t race in a couple years? Does it take a while to get all those little pieces back?
No. Last week I was good and Phoenix I was good. I was leading and I’ve been leading laps, so it’s not like it’s new to me. I don’t know what it is. My timing is a little off and that makes me ride tight. I’m in shape, though. I put in long laps during the week. It’s hard to get the race pace together during the week. You obviously bring that intensity up on the weekend and maybe that makes me tighten up a little bit, so there’s some stuff to work on. I need to ride with some better riders and chase them down and you get used to that race pace.

You’ve got to be hungry though when you’re leading like this. How motivating is that to get back to work?
It is. Now we got a four-week break. It’s good to end it on a podium but I had that win. We’ve got to chase it. We’re still in there. He didn’t gain anything, but I didn’t lose anything. Unfortunately I would have caught something if I’d won. But we’ve got two more rounds left.