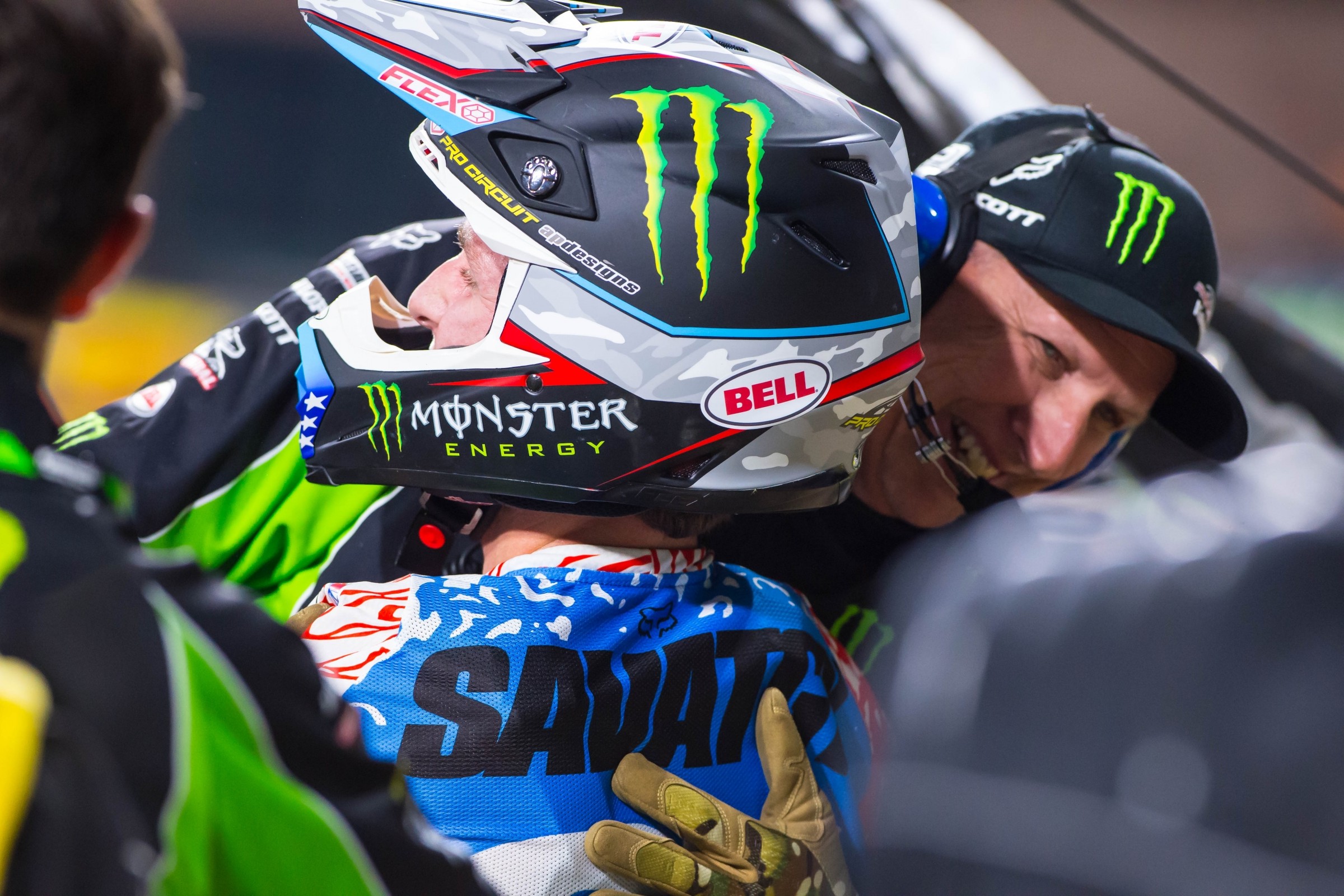 The laws of racing say that the first win is the hard one, and once you get it, the rest come easier. That’s the case for Monster Energy/Pro Circuit Kawasaki’s Joey Savatgy, who has now won two races in the last three weeks, and once again enjoys solo possession of the red plate in 250SX West Region. We talked to him in the team truck after the race.

Racer X: You got the win tonight, second W. Feeling good taking the red plate into Dallas?
Joey Savatgy: Yeah, it’s a good night, man. We got a good start and from there put ourselves in a good position. That’s been crucial. With as many dudes as there are right now going fast it’s very important to get off the gate and put yourself in a position to win and we did that tonight. So all in all it was good. Got the red plate still and got to keep the ball rolling.

What’d you think about the track out there tonight?
It was tough. It was really slippery. Very easy to make a mistake or to push the front end or slide out. All in all it was good. There’s not a lot to complain about when you win the night. But the track was tough. It was slippery. The whoops were weird. They were bigger whoops but they weren’t crazy big. I would say they were about a good size. All in all, the track actually held together pretty good. Practices today the track got really rutty and didn’t break down as much for the main event.

So that triple going into the sand section, was that pretty sketchy?
No. For me it was easier. I don’t know. You didn’t have to slow down, you just kind of launched into there. For me, it felt faster and it seemed easier on me. Landing in that pocket… a lot of guys weren’t doing it but to me it felt faster. I did it in the first practice actually. I was the only one that did it in the first practice. It didn’t seem too gnarly to me. I thought everyone was going to be doing it so I had that in my mind that I needed to do it if I wanted to win.

The thing I noticed was a lot of the 450 guys weren’t doing it. You guys were mostly the ones doing it.
Yeah! I don’t know! It didn’t seem that gnarly to me. It seemed easier and faster.

Is there anything you got planned for the break?
No, get some outdoor riding in. Got to kind of keep the balance of outdoor and supercross. But for now we’re just taking it day by day. We’re focusing on the week. You got to get the homework in during the week and then show up on the weekend prepared and happy and with your mind in the right spot and ready to go. Feeling better. I was a little under the weather last week, but felt better this week and have another week to kind of recover and to keep feeling better and keep the ball rolling.

Did you have a chance to talk to Chris [Alldredge] about what happened with his bike?
I haven’t. I talked to him but I didn’t ask him about that. I didn’t want to talk to him about it. He was having a really good night and it’s a bummer for him. He’s been having a little bit of tough luck with crashes and stuff recently. He’s making progress. He made a bike change this week and I think it helped a lot.

Got to be happy about both of you up front at the beginning though.
Oh, for sure. One and two. It doesn’t get much better than that. It would have been good if we could have kept it there until the end, but it’s stepping stones, building blocks.