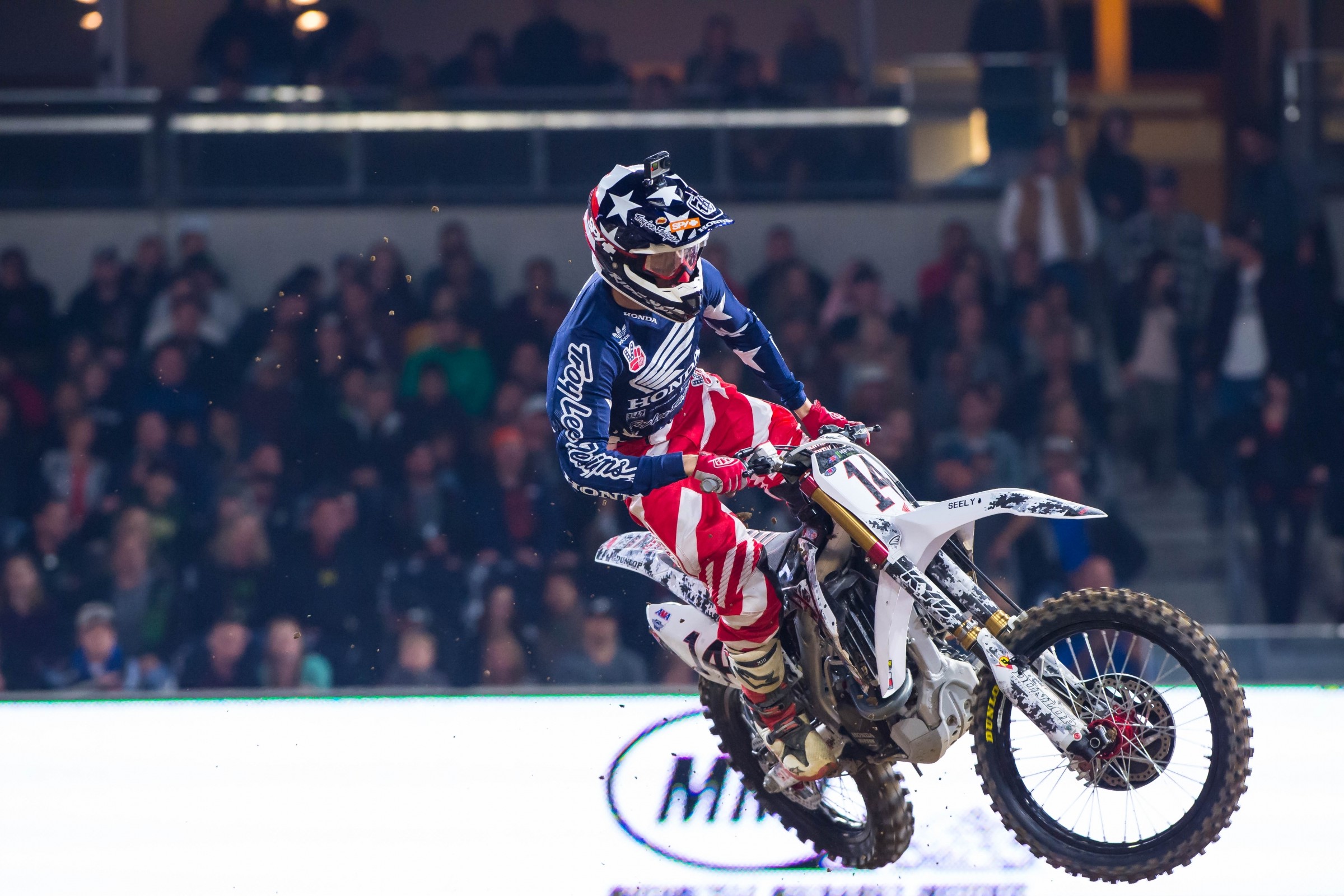 By Steve Matthes and Kyle Scott

Racer X: After a couple of weeks that weren’t on par with what we had been seeing, you got a good start and got back on the podium. Has to feel great.
Cole Seely: Yeah it’s just a matter of getting back between the weekends and testing with the team, and putting my trust into them, and them analyzing the data to figure out how to make the bike better. Not that it was bad, but we were just a step below where we wanted to be and they kind of filled the gap and helped me get where I wanted to be. The bike felt great tonight, it was on point everywhere where I wanted it to be—it was predictable and fast. So I was really happy out there, I felt like I put in some really solid laps. Unfortunately, [Ryan] Dungey doesn’t make a lot of mistakes. I was trying! He’d made a little one here and there, I’d gain maybe a tenth on him here and there. At the end I started to close in, but just not enough time. Still happy with the night. This is where I feel I deserve to be every weekend, so I’m happy with the podium.

So what did you end up doing to your bike?
I’m the kind of rider that likes a lot of low-end torque. I thought I had a lot, but we upped it a little bit more, in second third and fourth gear, the important gears, and that was a big change for me. It helped. I had a little more throttle control. Then Johnny at KYB, we did a lot of testing last week, and we actually changed some clickers in practice. I’m usually pretty good at knowing what I want and what direction to go, I’m learning with the new suspension setup what to tell him and how to decipher what I’m looking for. We made a lot of changes in practice and I felt like it all went the right direction. – Steve Matthes

Ken Roczen: My weekend was actually a little rough. Just struggled all day—just bike setting wise. I didn’t feel too comfortable and we went back for forth on a couple of settings. It didn’t make it that easy, but we went into the main event with a little change again, and we salvaged a third. Obviously we want to win, but we’re on the podium and we’re healthy. That means a lot to me, we’re still in the championship hunt. I was kind of bummed, I wish we could have gotten Cole. The track was tight in spots so it was really hard to pass. In my personal opinion it wasn’t the best track this year in terms of the overall layout, because most of the tracks this year have been pretty cool. It had a really hard base, so that made it a lot more slippery. The whoops were tough again. Like I said, we salvaged a third.

At times you would attack, then settle, and then you’d get attacked. Was that getting frustrating?
Yeah, especially at the beginning. I had to get around Trey [Canard] a little bit earlier but it was hard to pass. He made a mistake and I was able to get by him. I wish I could have made the pass earlier because I think I could have ridden more free and picked up on some spots, but it is what it is. – Kyle Scott

Racer X: Good start, but you almost died in the second turn!
Marvin Musquin: [Laughs] I got a great start and I went a little bit wide, and Ryan [Dungey] got the holeshot. I’m a little bit bummed, to get the holeshot would have been cool. Then we almost got together in the first doubles, I had to slow down, people got inside of me, and then all by myself, I think I tucked the front into a rut and I don’t know what happened! My body went off the bike, I was running and then I jumped back on. I was like, “What are you doing?”

Yeah, but you saved it! It was a good one.
Yeah, but it was frustrating. Being able to get the holeshot almost and then do all of those mistakes, it’s tough. Then I was running sixth behind [Eli] Tomac, Roczen was right in front of Tomac, I was doing good. I had a good ten laps and then I started to make some mistakes. The track was really hard pack and slippery and I was making some mistakes. I was not really loose on the bike. I was fighting it a little bit and I was not free. I’m kind of bummed because I think that track would have been good for me but the dirt was really slippery. Anyway I got seventh, I wish I would have done better.

It says something about this field. You get a good start in Oakland and you get third. It’s almost like where you start is where you finish.
Exactly, but I want to learn, and I keep learning and getting better. I had a good heat race. But those guys are getting better too—everyone is trying hard and pushing. – Matthes

Racer X: One of those nights—good, bad for you. Another good thing, winning a heat again, that’s awesome, but then a crash in the main event, coming from the back.
Davi Millsaps: Yeah, two crashes actually. Went down on the first lap. I had a good start but then Marv didn’t stop and ran everyone really, really wide and let everyone go inside of us. I went from a good start to a bad one and then I crashed and made it even worse. I came back, I think I passed into the top ten and ended up going down again. That one hurt. I came back to eleventh. My lap times were pretty good and I felt pretty good. All in all I can take stuff from tonight and push on to next weekend. It sucks to win a heat race and have that happen in the main event. You know, no excuses. I haven’t been up there pushing that pace for a long time and I have to get used to it again. It’s becoming more comfortable for me so hopefully I’ll be up there.

Any heat race bonuses from KTM?
No.

That’s too bad. Three heat race wins is impressive. I guess in the mains you just try to get a good start and try to hold on for ten laps, hold on for 12 laps, build from there?
Yeah and that was the goal. Get a good start and push as long as I could and if I blow up I blow up. At least go as long as I could. Unlike last week where I got the holeshot and just tried to hold on [ride a pace that could do] for twenty laps. So kind of a different mindset. – Matthes

Racer X: Factory rider, being on the line for the LCQ, and you were outside a qualifying position. What’s that like?
Jake Weimer: Dude, first lap I was like, “I don’t know if I’m going to make it!” In the semi, it was a racing deal, but I like smashed in the first turn. Hurt my hand pretty bad. It took me a couple of straights to be like, “Okay, I can ride.” Yeah, LCQ, [Blake] Baggett went down in the first turn and it kind of bunched some people up. I was like eighth or something and I was like, “Oh my gosh.” That might have broken the internet if I didn’t make it.

Undeserving of this ride! Take this bike away!
[People would have been like] “I told you! I told you!”

In the main, followed Brayton around a lot in tenth and then you hit Schmidt’s rear tire and Millsaps got you.
I crashed before that! I was behind Brayton and I made a big mistake, so I just tried to settle down and calm down, and then my mechanic put on the board five to go. So I was going to put on a push there and then I crashed, yeah, then got up and crashed again when Schmidt crossed over some ruts, went down again. That’s when Davi got me. – Matthes