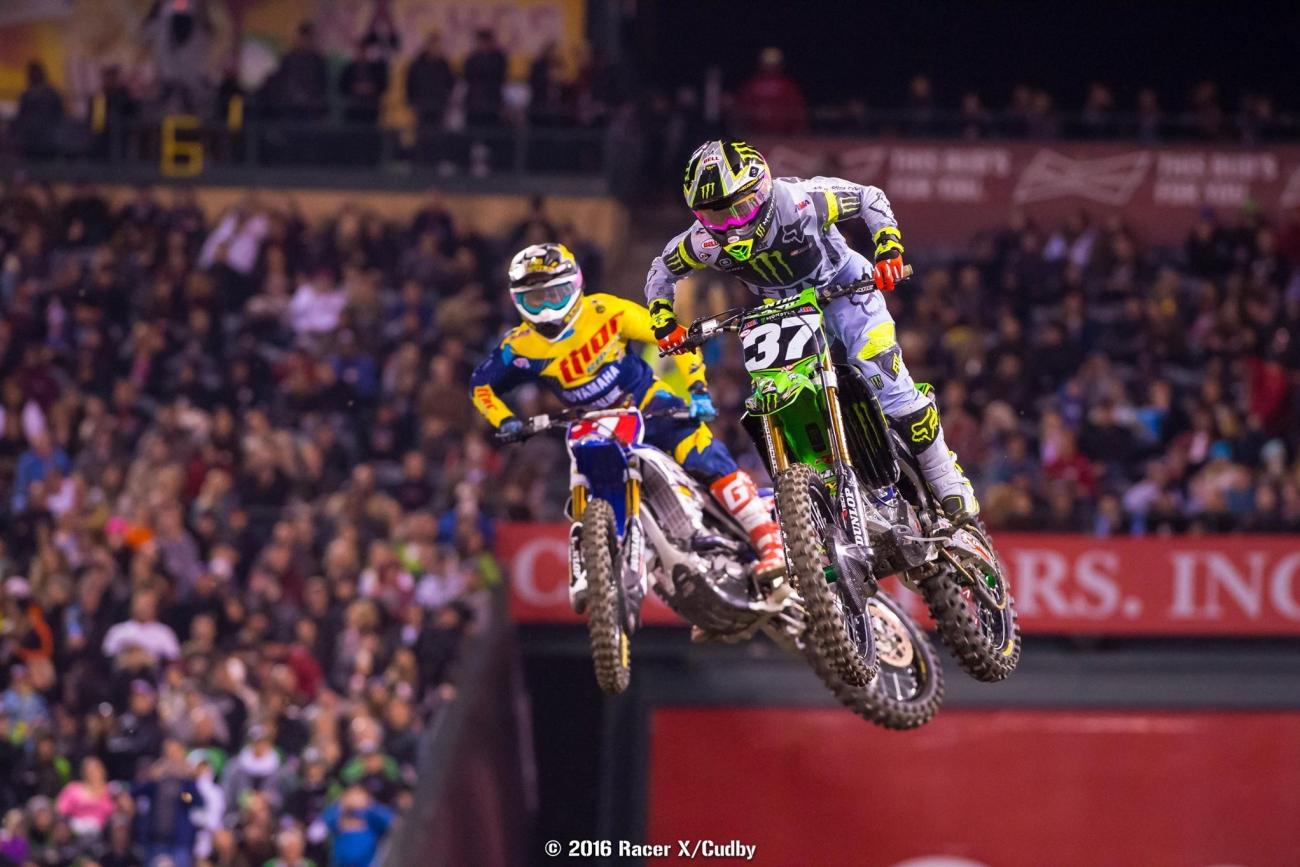 Joey Savatgy is coming off a fourth overall in the 2015 250SX East Region and is on the short list of title contenders for this year’s West Region. Last week’s eighth in Anaheim was the result of a bad start compiled with a bit of bad luck in the middle of the pack. He currently sits twelve points behind last week’s winner, Cooper Webb.

We sat down with Savatgy yesterday at press day at Petco Park in San Diego to talk about what happened last week, his thoughts on East vs. West and when he plans on jumping on the 450.

Racer X: You crashed last week at Anaheim. Can you tell me what happened?
Joey Savatgy: I didn’t actually go down but I got tangled up with somebody. Had an okay start, not the best start in the main. Just didn’t make it happen. We were maybe P-5 or so that first or second lap, which wasn’t bad for as bad as the start was. We were making progress right there with Cooper [Webb] and [Zach] Osborne and all the guys that were on the podium. Just went into the turn before the finish line and next thing you know I couldn’t go anywhere. I looked back and had somebody’s bike stuck to me. I had to get off my bike and get my foot peg out of their front wheel. That kind of set the tone for the race after that. Didn’t ride that great. I think I came back to eighth. It wasn’t ideal and it wasn’t what we had planned for the first round, but we got points and we didn’t DNF. So for as bad as it could have gone, it was what it was and we made due.

Did you do anything different this week with your training program?
No, not really. I felt like we were prepared for the first round. I felt like we had the speed to run up there with those guys. I think that’s just the way that cookie crumbled that race. I put myself in a position to be tangled up with those guys. I didn’t get the holeshot. I didn’t get out front and I didn’t get away from all that. So a lot of that’s my fault. Just going to focus on getting a good start here this weekend and trying to do it all over again.

So you originally wanted to race the East Coast, right?
I don’t really care what I race at the end of the day. Racing’s racing. East Coast would have been ideal. I live back there. It’s easier for me to get to the races. But at the end of the day I was ready to go for A1. Another seven weeks of riding and training would be quite a haul before we even get to the first round. I was ready for the first round, that’s how it played out.

When you race the East do you feel like it’s almost like a bit of a waiting game?
If you’re racing East it’s because you’re not ready. I think for me, like I said, I was ready to go for A1. If it would have been one of those deals where I could have picked, I honestly probably still would have picked West just because I felt like I was ready. Another seven weeks of training, that’s a lot of stuff to do on the bike and off the bike. It’s seven weeks of training and getting ready when you’re already ready. I think I would have picked West regardless. I think if you’re going to race somebody you want to race the defending champ. That’s how I look at it. I want to race the best guy that there is. I feel like that’s the guy with the number 1 plate.

How long did you know that you were going to be racing West?
I never actually got a for sure I was racing the West. Mitch [Payton, team owner] never really gives us a yes or and no; it’s kind of just play it by ear. He tells all of us to be ready and whoever’s ready he’ll throw out there. If he doesn’t think we’re ready he’ll hold us off. So I never actually got a for sure, “Hey, you’re doing West,” but it was like, “Hey, come out here and let’s get ready for West and see how it goes.”

So everybody’s preparing for West?
The plan is everyone to be ready for West. If we’re doing 450 like we plan to be in a couple years I think we have to be ready for A1 regardless. That’s kind of how Mitch looks at it. If you’re not ready for A1 and you’re in the 450 Class you can’t wait seven weeks until the East Coast starts. You got to be ready.

Have you done any riding on the 450 yet?
No, I actually haven’t. Just been mainly on the 250. I wouldn't mind getting on a 450 maybe for outdoors this year and just getting some time on it and getting used to it. I’ve just been sticking to the 250.

What do you think about the track today?
It’s hard to say, man. Press day never really gives you a good feel. It’s thrown together. Obviously they don’t have the water down. They haven’t had a full amount of time to prep it. It’s just kind of sections put together. But I think it’ll be interesting. I think it’s going to be hopefully another good race.