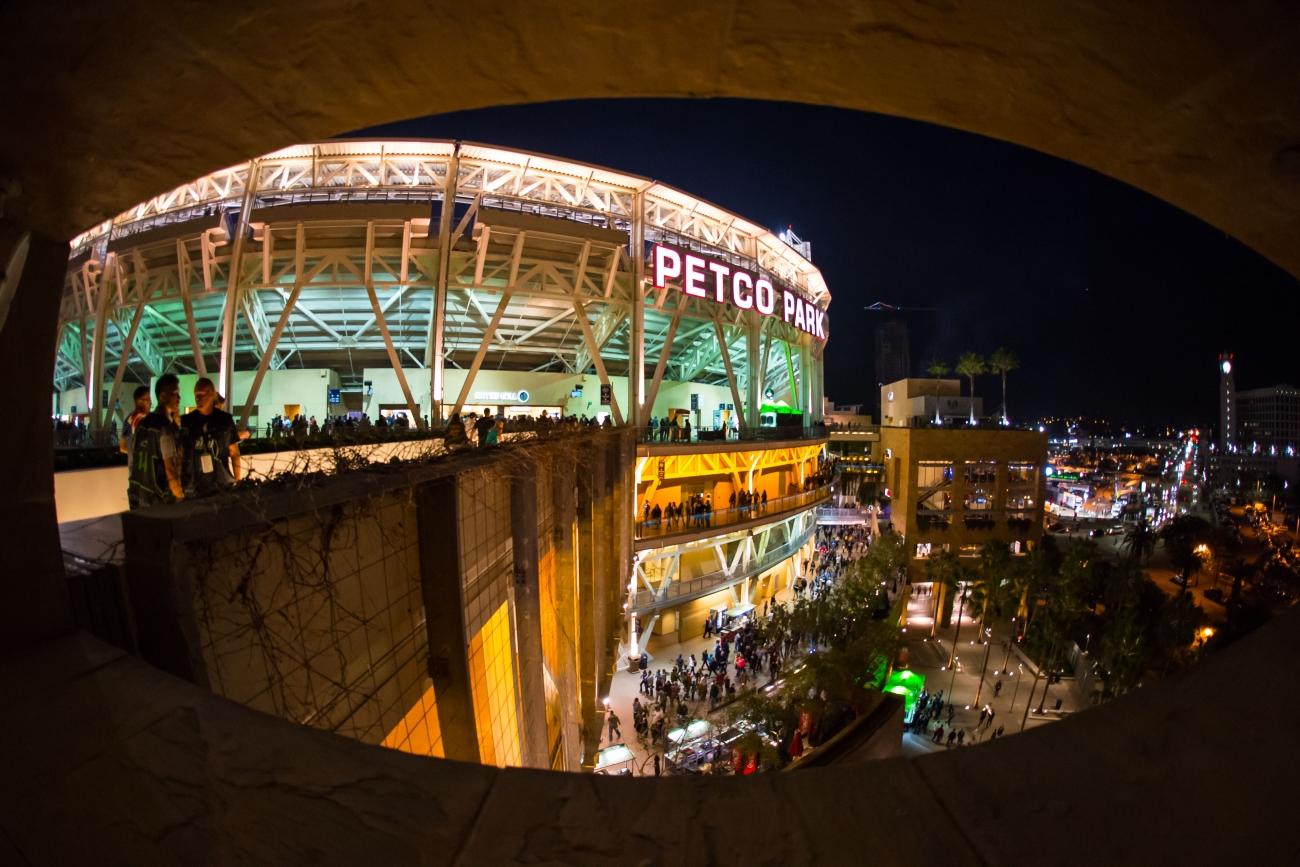 And so we head to round one of the two-headed San Diego monster. Last year marked the move away from Qualcomm Stadium and into downtown’s Petco Park. Many had mixed feelings about how the transition would go. Qualcomm has been a staple of supercross for decades and for the local SoCal folk, it is very easy to hop on the 15 freeway and hop off into the pits. The downside, though, was an aging stadium and lackluster amenities. In short, it was simply time for a change and luckily Feld agreed.

Petco Park is right in the heart of the city and offers everything you could want in an outdoor stadium. With restaurants, hotels, and the Bayfront all within walking distance, convenience is abundant. The stadium itself offers first class concessions and accommodation for the fans, making it a clear step up from Qualcomm. All in all, moving the race downtown makes San Diego one of the premier destination races on the calendar.

The track inside Petco Park is the typical baseball field variety. When we visit the baseball fields, expect shorter straightaways and more 90 degree turns . The start has a double left turn, making the inside line the most viable. I know you’re thinking “the inside is always the most viable”, but when the second left is added in, it enhances that thought. Not only would someone starting from the outside have to carry more speed into the turn one, but they would also have to beat everyone around another outside before getting back to neutral ground. Being on the outside adds several extra yards of distance in both turns and in the rough and tumble arena that is supercross, covering extra distance twice is no easy feat.

The rhythm sections look to be fairly easy, with the longest section on the back wall offering the most options. Anytime there are multiple jumps of the same size, look for riders to push the envelope. A section like this is where you would see James Stewart (if he races) go for a quad and change up the rhythm. Riders will be trying many different combinations and ideas, versus the cookie cutter rhythm that most of the track employs. With one set of whoops and a basic layout, I think this track will be fairly easy. After a very technical Anaheim course, it looks to be the opposite end of the spectrum this weekend. Keep in mind, that simply changing the angles of the jumps can make a very tame track into a very demanding one. How it shapes up will be determined by the Dirt Wurx crew and their finishing touches.

Jason Anderson, that’s who! Coming off of three holeshots at the Monster Energy Cup last October and all of the good things I had heard about his off-season, I fully expected Jason to come out swinging at Anaheim. (I’m not going to say I told you so but I called Anderson for the A1 win last week in this column. Got second right, too. Actually, got first and second right in both classes, ahem.) Anderson delivered alright, working his way up to the lead and never looking back. He will win more races this year.

Ryan Dungey had a bizarre night filled with run-ins and tip-overs. He persevered, though, finding his way all the way back to second place after an altercation with Trey Canard. If anyone was doubting Dungey’s continuance from such a great 2015 season, they are now re-thinking that. He is the odds on favorite to repeat in 2016.

Cooper Webb rode flawlessly to another 250 West Region win. I was unsure if he would be able chase down Jessy Nelson after Nelson raced off to an early lead, but to Webb’s credit, he stayed calm and slowly made his way to the front. It was a veteran level ride from a rider who isn’t old enough to be a veteran.

Ken Roczen’s result on paper may not be what he was looking for but his riding was impressive. Roczen crashed on the first lap of the main event and was dead last as the leaders made their way around unscathed. Kenny put his head down and went to work, making moves all the way to a top five finish. If he isn’t on the podium this Saturday, I will be very surprised.

James Stewart came into the season a bit less prepared than he would like to be. That situation grew far worse on the opening laps of the main event as he and Ryan Dungey came together, sending Stew to the ground in an unconscious heap. He has a chance to race this weekend so let’s hope he gets back on track sooner than later.

Jessy Nelson had a big crash at the KTM track on Tuesday and I wouldn’t expect to see him this weekend in San Diego. It’s a shame because he looked to be the most likely threat to Cooper Webb this season.

Justin Barcia came into the season with high hopes and I think a lot of self-induced pressure. He had a great summer in 2015 and his off-season went just how he had planned. All of that momentum surely had to transfer into this supercross season, right? Well, maybe. I don’t like to draw conclusions from Anaheim 1. There is too much pressure and screwy things always happen there. He will need a strong showing this weekend to quiet the own stress running through his mind, though.

Is Jason Anderson a legitimate title threat or is he still going to show inconsistency?

How fast will Eli Tomac climb back to 100 percent?

Can anyone beat Cooper Webb now that Jessy Nelson is down and out?

Can Justin Barcia bounce back or will we see the same struggles from his 2015 SX season?

Can Christophe Pourcel withstand a 20 lap fight near the front if he gets a good start?

After the Round 1 chaos, who will settle in and stake their claim to being a contender? We saw many possibilities like Seely, Canard, Tomac, Reed, Roczen and of course Ryan Dungey and Jason Anderson. Dungey is my odds on favorite at this point. Who steps up?

Word leaks out about Leonardo DiCaprio filming “The Revenant 2” in the Murrieta area. The sequel features Leo camping out at Milestone when a rabid Weston Peick mauls him unmercifully. Peick wins an Oscar for his performance but is suspended from the awards ceremony after head-butting Ryan Seacrest on the red carpet.

Vince Friese takes out a flagger, a Dirt Wurx member, Duke Finch, Dorothy Mantooth, three 250 riders, Lurch, Dave Despain, and one of the guys selling Churros in the Club seats.