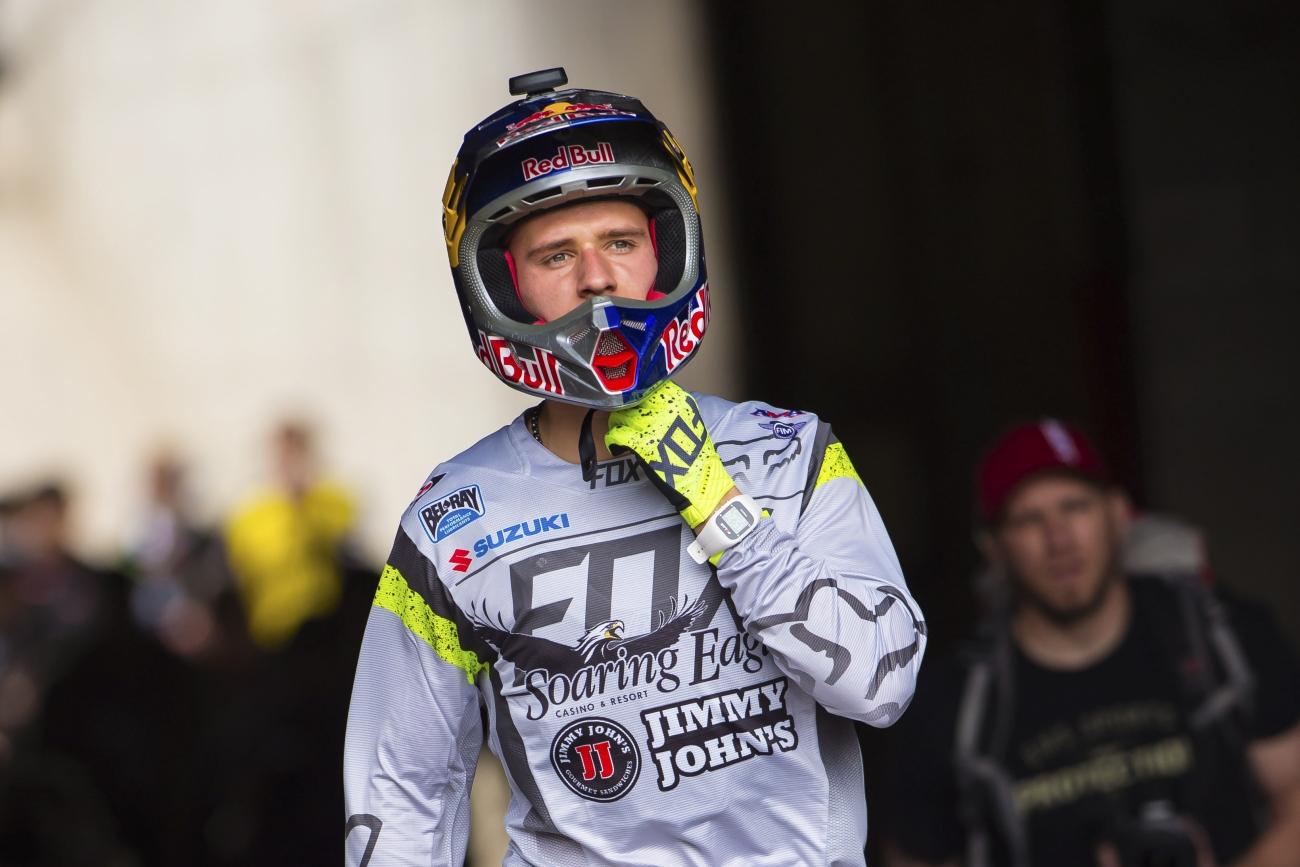 I thought Trey Canard was going to win Anaheim.

If you averaged out every session before the main event—all the practices and the heat races—Trey was best, with the fastest qualifying time and a strong heat race win. In the main he climbed to second, even passing (and, oops, knocking down) Ryan Dungey. Trey just had to catch his teammate Cole Seely, which Trey had already done convincingly in the heat race, and the race win was his. But I blinked for a second, and next thing I know, Jason Anderson is getting inside of Canard into the first turn and taking second away.

Trey had shown the potential to win, but he did not actually win.

“I just didn’t ride well; I was tight, picked poor lines and didn’t fix my mistakes,” he said in a team statement.

He could ride better as soon as this weekend, and he could win.

Same with Seely, who led for a while, same with Dungey and Ken Roczen, who raged from so far back. Same with….a lot of riders. Yes, Anderson won, but all the contenders showed some level of potential, none of them completely sucked, and none of them, sans Anderson, showed their full hand. That’s good, because it leaves us with more questions than answers.

That’s what we really want heading into round two.

We love the opener for the chance to finally answer our bench-racing questions, but those answers are better as forbidden fruit. The longer we wait, the longer things stay exciting. Right now, there are reasons to be excited about a good dozen riders heading into Phoenix San Diego this weekend, and that’s exactly what we hope for every year.

If you have the race saved on your DVR (or are lucky enough to have found it on YouTube) go scroll to lap 10 of the main event. You’ll see five contenders so close that they fit in a single camera shot, and they’re actually fighting for fifth! Fifth! That’s how close the action was. Here’s a synopsis of why so many riders have so much to look forward to, and soon.

Miscellaneous riders: I hear, as of today (Thursday) that it’s likely James Stewart will race this weekend. Obviously we have no idea what to expect out of Stew, he only did a lap or so in the main. That’s a huge question mark right there.

Justin Barcia had a nightmare ride, going from second to tenth, and crashing to fifteenth. No way in hell Barcia faded because he’s not in shape. He pumped up. That’s what the season opener does. If Barcia wants to find the bright side, it’s that he was way better in those laps before he tightened up than he was at any point in supercross last year. And his starts are back!

I’ll use this as an example of riders and teams feeling strange at the opener. After the Peick/Friese dustup, a bunch of us media types descended on the JGR pits. We were outside the truck all pumped up and loud, and usually the JGR crew and Barcia are fine with some kidding around. Barcia, especially, loves to mess around. So during this commotion Barcia pokes his head out of the door and says, “Hey guys, we’re trying to get ready for a race here.” And I just thought this was another joke! So I replied, “We’re here for Weston Peick. Who are you?”

Well, that didn’t go over well. Things were just tense all day and for Barcia, the Peick deal certainly didn’t help calm things down. Coy Gibbs then shooed us all away. Ooops. It will be funny in a few weeks.

Christophe Pourcel did something amazing. The man has not raced a proper U.S. Supercross in five years. Five years! He’s never raced one on a 450. Never! And in the final practice, he did a lap faster than everyone else. Everyone! That’s just an incredible feat, even by his standards. No idea what that means for his upcoming results but it at least makes him a threat, right?

Justin Brayton: Tenth doesn’t sound spectacular but it’s what the KTM rider needed. Last year sucked. I think his off-season European success and solid riding at Anaheim showed he’s at least back in top form. Now, is Brayton’s top form good enough to move him further toward the top five in this field? That’s a big challenge, and a tough one to answer, but this is a good start for Justin.

Dean Wilson: Ninth doesn’t sound spectacular but it’s what the KTM rider needed. Last year sucked. Dean just needs to stay healthy for a while and this time he even endured a heat race crash and bounced back up. Didn’t hear about any arm pump, either. This solid result is a good start for Dean.

Davi Millsaps: Eighth doesn’t sound spectacular but it’s what the KTM rider needed. Last year sucked. Millsaps must have things roll his way this year. The seven riders ahead of him are all on the short list of title contenders, so finishing next-best is a good start for Davi.

Trey Canard: Like I said, Trey looked to have the stuff to win.

Chad Reed: Reed looked great, much better than this sixth place shows. He was even up front in practice times, which usually isn’t the case. At night, he had moments where he looked ready to pass the likes of Dungey; he also had some dull moments. The potential and speed he showed, though, makes it look like Chad will be in the hunt again. It was much better than what we saw for most of 2015.

Ken Roczen: Kenny didn’t win Anaheim this time but he came from twenty-first to fifth. Twenty-first! Saw it with my own eyes (Emig called him in thirteenth on TV, but that was as Kenny came through turn one. He crashed in the next corner.) Kenny told me this has been his smoothest, most relaxed, drama-free off-season ever, and team owner Carey Hart said the same. I think not winning the opener actually helps here. For Kenny, being spectacular and winning races is never an issue, but he’s had some problems staying strong for the long haul. I think this low-profile finish is actually a good thing.

Eli Tomac: Exactly what you want from Tomac, right? He’s coming off major injury, has limited riding time and a new bike. He didn’t crash, he scored solid points, and at no point did he look unready or uncomfortable on his new ride.

Cole Seely: Yes, Cole had a big lead and that could, or should, result in a win. You have to factor in the opener here, though. I think the nerves just got Cole, and if you give him this lead again in March, he’ll bring it home. Also, Cole wasn’t setting the world on fire in practice, his heat or on the first start of the main. He was probably expecting a low profile night and then all of sudden there was a red flag, a restart, a holeshot and a lead, and a “Oh my God I’m winning Anaheim 1” and I don’t think he was ready for it. Cole was sixteenth at the opener last year. I don’t think he meshes with the opening night jitters yet, but we saw how fast he can go.

Ryan Dungey: Dungey went through all this crap and wasn’t even that far behind Anderson on the final lap. I think Dungey’s competition really screwed themselves last year. They crashed out, he railed, and now he has a mental strength and calmness that makes him a totally different person. Years ago Dungey’s fiercest competitors had an edge because they felt he wasn’t as mentally tough as they were (I’m talking guys like Ryan Villopoto and Reed, who are not afraid to walk through fire). That Dungey is long gone, and that’s going to make him very hard to beat.

Jason Anderson: Obviously, Anderson was awesome at Anaheim, and maybe the only one who brought one of his pre-season twenty lappers into the stadium. There’s so much going Anderson’s way right now, including the new Husqvarna, which is basically the same bike Dungey won with last year and is much, much better than the previous-generation bike Anderson raced in 2015, a full calendar year under Aldon Baker’s watch, and a long stretch of building without a serious injury. In fact, Anderson’s performance was so good that it’s almost scary. He rode right through some top contenders and won easy. What if he keeps doing this and makes the title chase boring?

I’ll play devil’s advocate here. The same reason Anderson cleaned up is the same reason everyone else had problems: the opener is weird. These guys are finely tuned racing machines, but they’re still human, and most of them get nervous, anxious and tight at the opener. You could see it. Most of the top guys were fast in spots, but also looked hesitant in others. That’s the nerves talking. I don’t think Anderson hears that stuff, though. He’s loose, he has fun, he doesn’t seem like someone that gets too hung up on the mental game—plus he was an underdog coming into this race anyway.

Look at the previous list of round-one winners and you’ll see riders who usually don’t struggle on the mental side. Mike LaRocco won back-to-back openers in 1992 and 1993. The Rock can smash mental blocks into pieces. In both of those years, though, the opener marked his only victory of the season. Ryan Villopoto won back-to-back openers in 2011 and 2012. He was never one to feel pressure. Ken Roczen won the last two openers, and he’s as happy-go-lucky as it gets for a rider at this level. There’s also a long list of underdog breakthroughs, like the only career SX wins for Sebastian Tortelli, Josh Grant and Greg Albertyn. There's also Davi Millsaps’ shocker in 2013. There’s an unavoidable anxiety for a lot of top riders at round one, but Anderson doesn’t seem like someone who cares about that stuff.

You could see that in his riding. Everyone else appeared to be riding in “can’t win the title in the opener, but you can lose it” mode and tried to minimize the risks. Anderson did not care. He hung it out! He was wild, aggressive, fast and threw in a few huge saves. During practice, he crashed spectacularly. Can he get away with that every week? And what about when everyone else is in mid-season form, say, just around mid-season?

Like I said, more questions than answers. Bring on an even better round two.