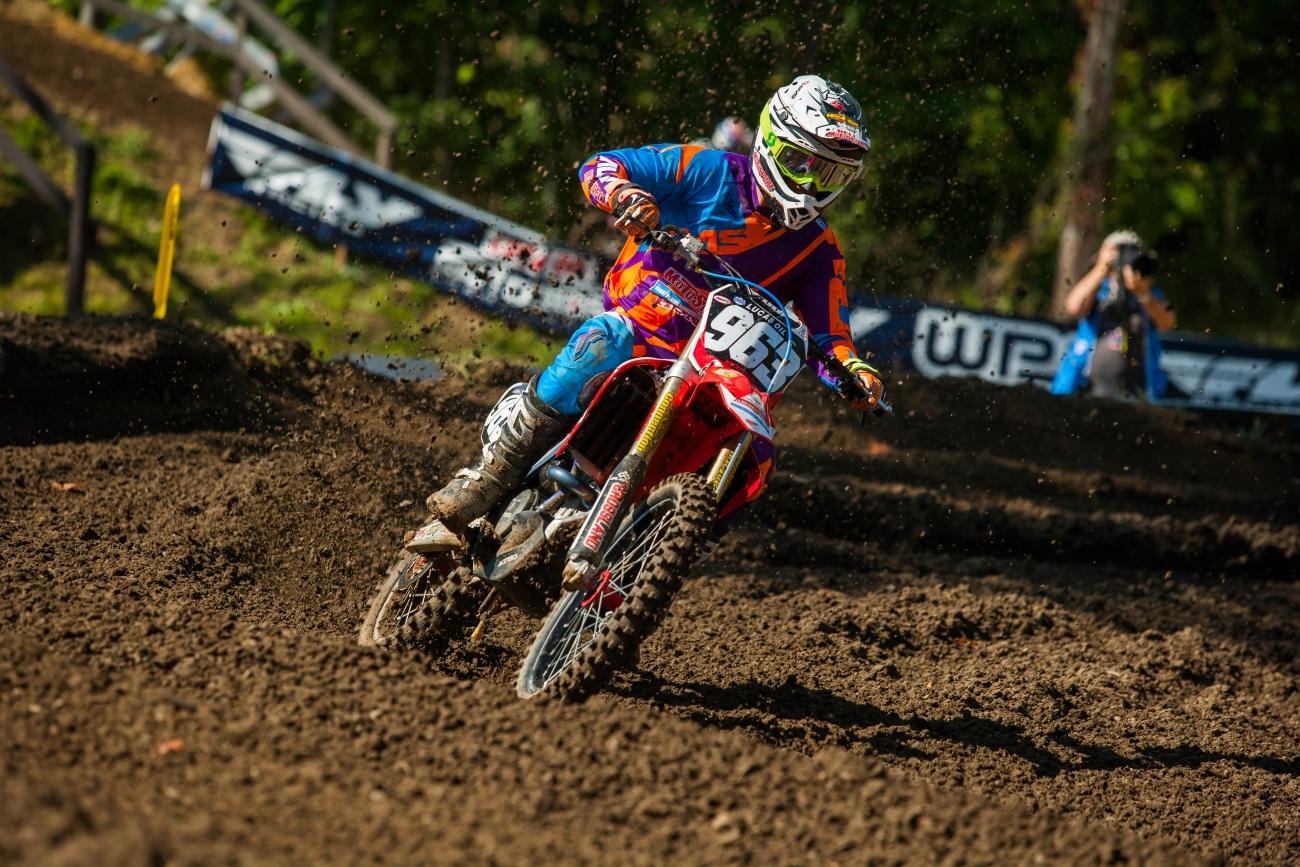 The hard work has finally paid off for Chase Marquier. The Oklahoma native will make his professional supercross debut this Saturday at the 2016 Monster Energy Supercross opener from Anaheim. Marquier will be riding for Crossland Racing in 250SX with teammate Kyle Peters.

Marquier earned his supercross points last season when he raced Ricky Carmichael’s Road to Supercross. Later in the 2015 season he raced the 250 A and Open Pro Sport classes at Loretta Lynn’s, finishing fifth and eighth, respectively. With help from the Motosport.com/Crossland Racing Honda team he gained more experience by racing the final two rounds of the Lucas Oil Pro Motocross Championship at Utah and Ironman.

With Anaheim 1 on the horizon, Marquier is feeling confident but he also said that he doesn’t know quite what to expect. We wanted to get to know more about him before his big entrance, so we caught up with him on Tuesday morning.

Racer X: What are you up to?
Chase Marquier: Oh, nothing much. I’m trying to find a place to ride today, but it’s raining everywhere. All the tracks are cancelling right now.

The rain finally hit, huh?
Yeah, yesterday it was a 90 percent chance and it didn’t even end up raining. It never rains in California. I guess I came in the wrong year. Every single day it’s like a 90-100 percent chance.

Do you consider yourself a good mud rider?
I like it. It rains a lot in Oklahoma. I just hope that if it’s muddy then it’s full mud, you know? I don’t like half mud. If it’s half mud then it’s sketchy because you still have to go for the triples.

That’s a good point. It’s hard to comprehend how you guys even jump the big stuff when it’s a mud race. Anyway, we just wanted to catch up with you to see what you’re all about. What might people not know about you?
Well, I’m 18 years old and I’m from a pretty small town in Oklahoma called Newcastle. My dad grew up racing and he had gotten my older brother a dirt bike. My brother wanted someone to ride with and he begged my dad to get me a bike also. He ended up getting me a dirt bike when I was four. I started racing a year later and then started going to some amateur nationals. I did decent and it took off from there. I didn’t think it would take off like it did, but here I am now.

Was your goal to always turn pro, or were you just doing it for fun?
At first it was just for fun, but then I started to make it to Loretta Lynn’s. Then I thought it was time to get serious and I started training. My dad would push me more and more. I never put it together at Loretta’s although I did do pretty well everywhere else. This year was a pretty big blow to me. At my regional I went undefeated and I went into Loretta’s thinking it was my year. The first moto I led the whole thing until I crashed. That kind of ruined me for the whole week.

This past year you had Crossland support in your final as an amateur. How did that come about?
It was kind of a side thing and they were just helping me out a little bit. I went to Guy Cooper’s house and he liked what he saw. I got some parts and ran the graphics and things like that. It carried over to the final two outdoor rounds. It made my year that I could race for them. I did pretty well at Utah and Indiana. I finished fourteenth in the first moto at Utah and then had an eighteenth in a moto at Indiana. It was good.

Yeah, that first moto at Utah was impressive. For a guy straight out of Loretta’s you showed that you had the speed early.
I should have finished way better than that too. I was running ninth for the entire moto and the last few laps I had nothing left in the tank. I was so out of shape it wasn’t even funny. Now I’ve been training every single day and I’ll be ready.

Did you know Guy from just living in Oklahoma?
I actually didn’t know him that well until this whole deal happened. Colt Nichols was a big factor for me because he was telling the guys to look at me to be an amateur rider for the team. I went up there and met Guy and his entire family. He was really awesome to me. He gave me a chance.

The team bikes look good this year and I noticed a new title sponsor on them with Ride 365. That’s Brett Cue’s business, right?
Yeah, that’s something that Cue and Dayton Daft put together. It’s ride365.com. I’m pumped with how they turned out this year and the gear is going to turn out awesome as well.

[Update: Ride 365 is no owned by Dayton Daft and Brett Cue. It is owned by Jarrod Rogers.]

How much supercross experience do you actually have besides this past off-season?
I raced at Monster Cup in 2014. I always would ride it here and there, but I never took it too seriously. The off-season was the first time that I actually would rode it consistently everyday. Back home I was riding and training with Trey Canard and that helped a lot.

You can’t beat that experience. Do you consider yourself a supercross rider or does your style fit outdoors more?
I enjoy riding supercross more. I like to jump things. It’s hard to say which one I’m better at. I’m in between because I like both of them the same.

It’s good that you jumped into the final two nationals because you had the chance to see where you fit in as well as what you need to work on. What are you expecting out of yourself as you enter your rookie season?
I don’t know where I stack up against these guys. I know I’m there with speed. I want to make every single main event and consistently be inside of the top ten. I would be happy with that. I would like to be inside of the top ten in points at the end of the series.

Have you been able to ride with your teammate Kyle a lot?
Yeah, we ride together quite a bit. He’s a good teammate to have. He has several seasons under his belt and it’s good to have him with me.

What’s this week been like for you? This is a dream come true for you. You’re about to race Anaheim 1. What are your feelings heading into it?
I’m pretty mind blown right now. I don’t really know what to say. It’s all so new to me and it hasn’t hit me yet. When I show up to the track I’m sure it will sink in. It’s been my dream since I was five years old and now it’s all happening. I want to give Chris Crossland [team owner] a special thank you for the opportunity as well as Guy Cooper for giving me a chance.