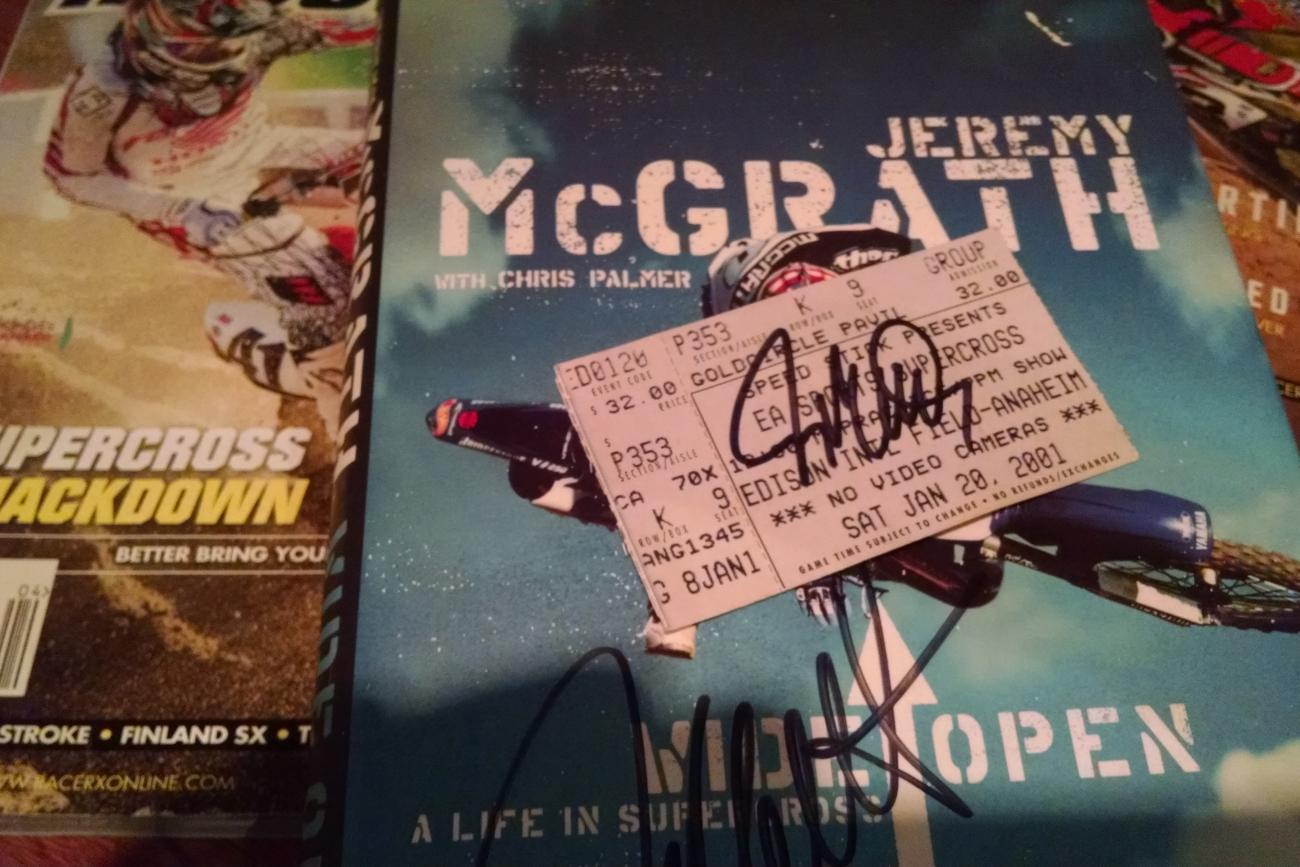 3 on 3 Tales from Anaheim

The other day I remembered a story I read years ago. I think it was by Eric Johnson, and he wrote about randomly finding a beer keg in a field, returning it, and using the deposit to pay for gas so he and a friend could drive his crappy Corvette all night to the season opener. I’m probably butchering the details, but that was the gist of it. I love stories like that, and I’ve lived through them as well. I live in Northern California, so I’ve taken the long, eightish-hour drive (which will extend by roughly three weeks if you get stuck in Southern California traffic) down I-5 to Anaheim more times than I can count. That road trip to Anaheim is always special, and the stories usually amazing. Most of them aren’t appropriate for print, but here are three that are.

Like most young dirt bikers in the ‘90s, I was a Jeremy McGrath mega-fan and I couldn’t get enough of watching him race. Only problem was, it seemed no matter what race I attended, he would never win, which was weird because he won a whole ‘lotta races. Sometimes another guy was just randomly red hot (remember when Mike LaRocco came from behind and won A2?), or sometimes it was something weird, like the time his motor mount bolts started coming loose and vibrating, causing him to back off. Hard to say if he would have won anyway, Ezra Lusk absolutely killed it that night.

Anyway, another January rolled around and my brother and I once again drove through the vast nothingness between Northern and Southern California for supercross. I’d prepared myself to not be disappointed if McGrath didn’t win, but after “The King” brought the house down in opening ceremonies by busting out a Nac-Nac (in those days the move was as electrifying as Kevin Windham’s mind blowing transfers) on the hot lap, that all went out the window. Tonight was the night! And he didn’t disappoint. I don’t remember what year it was, or who got second, but I do remember screaming and shouting as loud as I could when he took the checkers, pulling out another Nac-Nac as he soared over the finish line jump. My brain released every endorphin my body had at that moment, and I probably started going into convulsions—I felt richer than Scrooge McDuck swimming through his gigantic vault full of gold coins.

Little did I know the next time I saw McGrath win would be even better; it would be the last time it ever happened. It was January 20, 2001, and Ricky Carmichael had defeated McGrath the week prior in San Diego, setting the stage for an epic battle between the two. And with about five or six laps left, the fight everyone wanted to see started playing out. Carmichael caught McGrath and was challenging him everywhere, even getting by him briefly at one point, but McGrath hung on. The two main things I remember that night were being amazed at how crazy loud the crowd was for so long, and being on the verge of actual terror and panic several times when I thought RC was going to win. I was just about in tears when it finally ended! I still have my ticket stub from that night (pictured above), and I even got MC to sign it a couple years ago. Maybe this weekend I’ll go back to the exact seat and check out the view. If you see some moron screaming his face off staring at his phone in the cheap seats Saturday morning, don’t be alarmed, it’s just me reliving that crazy night via YouTube.

As awesome as supercross races are, sometimes it’s the journey, not the destination that provides the memories. That’s definitely the case when I think about the time I decided to drive down solo when I was eighteen and still pretty fresh out of high school.

I couldn’t find anyone to make the trip with me that year, but I wasn’t going to miss Anaheim, so I loaded up my crappy ’86 Ford Ranger, bought a case of oil (the thing dumped a quart once every three hours or so), and hit the road. I’d made arrangements a few months prior to stay with an ex-girlfriend (always a great move) who’d recently moved to Alta Dena, but looking back I realize she just said yes because she was trying to get me to change the oil in her car before she moved down there. Once I changed the oil and she headed out, she, of course, stopped returning my calls. I had basically no communication with her the month before the race. Then, being 18, I ignored that red flag and hit the road. I showed up at her place in the late afternoon, ready to party.

I’d had a little trouble finding the place, but after driving up and down the street I finally spotted the address and her car in the driveway. I drove to the end of the street so I could turn around, but when I got back to the house, maybe thirty seconds later, there was no sign of her car! I knocked on the door and she wasn’t there, so naturally, being 18, I did the creepy thing and just sat in my truck waiting for her to come back. Somehow at the time I didn’t think it was weird to wait outside an ex’s house for hours who hadn’t returned my calls in over a month. She apparently did think it was weird, because after falling asleep I was awakened by police officers tapping on my window. The amazing thing was, I soon found myself having a conversation with one of the officers about supercross, and how great McGrath was! Meanwhile the other officer started searching through my truck. Right when he was about to reach into a luggage pocket containing a bottle of 100 proof peppermint schnapps (hey, I was 18), they got a call and had to bounce. They told me to leave my ex alone and sped off.

Feeling a little rattled I drove down the street, parked at a country club, and proceeded to get into an argument with a bartender who refused to serve me beer. I know, what a jerk, right? I ended up sleeping in a church parking lot in my tiny, craptastic truck that night, woke up, went back to the country club and snuck into the locker room for a shower, then hit the road for Angel Stadium. Despite the rough night, it was awesome, and after the race (I can’t even remember who won) I left so full of excitement I didn’t even need coffee to make it through the all-night drive back home. All the garbage from the day before? No worries. I guess that’s just the magic of supercross, especially at Anaheim.

Things are a little different these days, and instead of sleeping in trucks and unwittingly stalking ex’s, my expenses are covered and thanks to my media pass I have free access to just about anywhere I want to go. It’s literally my job to watch racing, talk to the riders, and get answers to the questions I always had as a fan. How cool is that? But somehow, I can’t help but wish I was still sitting in the stands with my moto friends watching the races, peppermint schnapps cold beer in hand, enjoying the greatest sport in the world with zero responsibility.

If you have a chance to experience a live race this year, especially the electricity of the opener, do it. It just might be one of the most epic nights of your life.

Have a cool Anaheim story? Share it in the comments below.