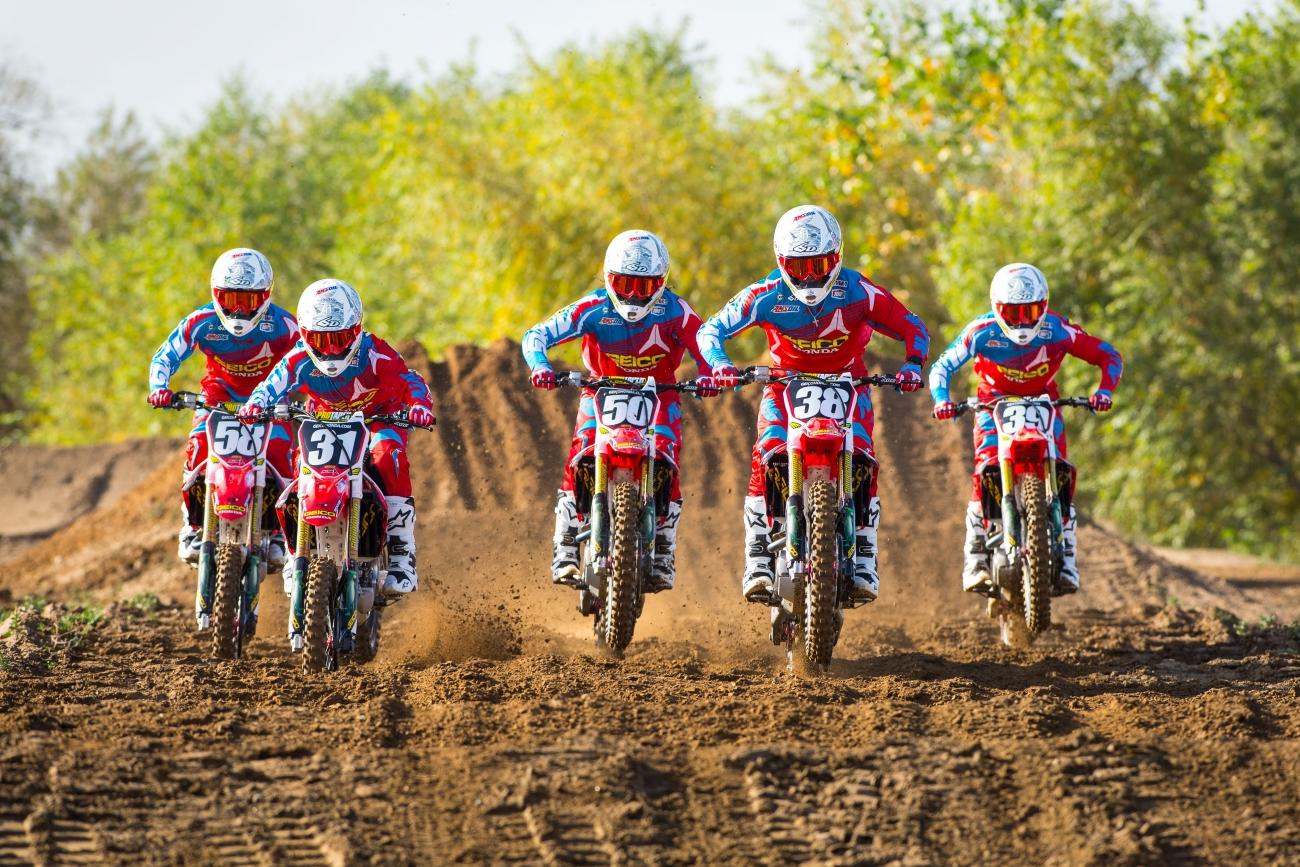 Monster Energy Supercross is back! The opening round of the 2016 season begins this Saturday at Angel Stadium in Anaheim, CA. A new year also means new numbers, riders, teams, etc. It’s hard to keep it all straight.

Notes: Canard broke his arm at Round 12 and missed the remainder of the supercross season. He was second in points at the time.

Notes: In his rookie season, Smith missed four rounds due to injury. He recorded just one top ten—a fourth at Indianapolis.

Notes: Hampshire’s status for Monster Energy Supercross is still uncertain after he sustained a head injury at Red Bull Straight Rhythm in October.

Notes: Stewart had finishes of 22-17-21 at three rounds. The other five rounds, he finished no worse than fifth.

Notes: Decotis gets a second chance with the GEICO Honda squad. He previously filled-in with the team in 2011.

Notes: Baggett sustained a broken collarbone, broken ribs and a broken scapula during a testing session at the Yoshimura test track in December. He will miss the start of the season. A timetable for his return has not been determined.

Notes: Stewart returns after missing all of last season due to a sixteen-month suspension from the FIM for testing positive for prohibited substance (amphetamine).

Notes: In his first season with the team, Roczen missed eight rounds due to injury. Before that, he had won two of the first three rounds.

Notes: Baker turned pro at the 2015 Lucas Oil Pro Motocross opener. This is his first season in supercross.

Notes: Cunningham had four straight top tens to end the 2015 East Region in 2015.

Notes: Albertson missed seven rounds after undergoing surgery on both shoulders. The last time he raced the 250SX Class was in 2009.

Notes: Worth finished sixteenth and fourth respectively in 250A and Open Pro Sport at Loretta Lynn’s in 2015. This is his first season as a pro.

Notes: Osby finished fifth and thirteenth respectively in 450A and 250A at Loretta Lynn’s in 2015. This is his first season as a pro.

Notes: Dungey’s worst finish en route to his second 450SX title was fourth at the opening round. Dungey has never successfully defended a title.

Notes: Wilson missed fourteen rounds due to a torn ACL/MCL sustained at the KTM test track.

Notes: Musquin underwent wrist surgery this off-season and will enter his first 450SX season behind the eight-ball.

Notes: Brayton missed nine rounds due to injury in 2015.

Notes: Millsaps missed the final three rounds of the season after being dismissed from team Monster Energy Kawasaki.

Notes: Short will miss the start of what will be his final season due to a shoulder injury sustained during the off-season.

Notes: Nelson missed the final two rounds of the series due to injury. He finished inside the top ten in all six rounds raced

Notes: McElrath sustained a wrist injury during the off-season, which will force him to the East Region. This is also the first year the TLD team will race in the East.

Notes: Hill finished outside the top ten just once in 2015. He moves over from Red Bull KTM, as TLD becomes the official factory team for the Austrian brand.

Notes: This is Oldenburg’s first season as a factory rider.

Notes: Frye turned pro at the Tennessee National, but raced just five rounds due to injury. This is his first season in supercross.

Notes: Osborne broke his thumb at the West Region opener last season, but rode through the injury to capture seven top tens in eight rounds.

Notes: Davalos missed the final two rounds due to Epstein-Barr.

Notes: Anderson finished on the podium in his first-ever 450SX last year at Anaheim. 2016 will be his second season in 450SX.

Notes: Pourcel hasn’t raced supercross since 2010, when he won his second 250SX East Region title. He has never raced 450SX.

Notes: Peick broke his foot at the second round which caused him to miss four rounds.

Notes: Despite his fill-in status in 2015, Nicoletti raced ten events due to injuries to Justin Barcia and Weston Peick. His best finish was a thirteenth, which he did three times. He is a fill-in rider again in 2016.

Notes: Barica missed eights rounds due to a pelvic injury sustained prior to San Diego. 2015 was the first year he failed to podium since moving to 450SX in 2013.

Notes: Still nothing official on Reed’s deal but we do know he will be riding for Yamaha.

It's now official, Reed will ride for Factory Yamaha.

Notes: The two-time 250MX champion garnered seven top fives in eight rounds in 2015. He missed the top ten when he failed to qualify for an event.

Notes: After finishing seventh at the opener last year, Webb finished no worse than second.

Notes: Plessinger was named 2015 SX Rookie of the Year after his fifth overall performance.

Notes: Renzland is entering his second season in supercross.

Notes: Nichols torn his ACL at the seventh round of the East Region and missed the remainder of the season. He spent his rookie year with MotoSport.com/GPI/Crossland Honda.

Notes: Hahn missed the entire 2015 Monster Energy Supercross season after a crash in practice at the season opener.

Notes: Alldredge’s best finish in his rookie season was ninth in Houston.

Notes: Savatgy finished outside the top five just once in 2015.

Notes: Bowers dealt with a back injury most of last year and missed the final round of the West Region.

Notes: Tonus raced just three rounds of his first season in supercross before pulling out of the series due to an illness.

Notes: Alessi missed the final seven rounds of the series following a crash at Daytona.

Notes: Peters has never raced the West Region since turning pro in 2012.

Notes: The Oklahoma native enters his first year in Monster Energy Supercross. He finished fifth and eighth in 250A and Open Pro Sport respectively at Loretta Lynn’s in 2015.

Notes: This will be the first season in his career that Chisholm has raced a Honda.

Notes: Hall will race the 450 Class once the series heads east.

Notes: Leib missed the final five rounds of the series due to injury.

Notes: Bloss won the coveted AMA Horizon Award after winning the Open Pro Sport and finishing third in 450A at Loretta Lynn’s.

Notes: The rookie will race the West Region along with Leib.

Notes: Schmelyun is expected to race the 450 Class when the series heads east.

Notes: This will be the Australian’s first season in Monster Energy Supercross.

Notes: Champion missed two rounds of the series due to injury.

Notes: The rookie will miss time after sustaining a back injury while testing.

Notes: The team is expected to contest the first seven rounds before heading to Europe to contest the European Motocross Championship in the EMX250 class.

Notes: Stewart will miss the start of the season due to a broken wrist sustained while testing.

Notes: Golden made history last year at Las Vegas, becoming the first female in more than four decades of Monster Energy AMA Supercross to qualify for the "Fast 40"—the riders that transition to the night program from timed qualifying—at the 250SX Class' Dave Coombs Sr. East/West Shootout in Las Vegas.

Notes: Nagy will fill-in for Ronnie Stewart for at least the first six rounds of supercross.

Notes: The rookie will have to skip the first two rounds of the series to race the Ricky Carmichael Road to Supercross in Amsoil Arenacross.

Notes: Thompson did not race Monster Energy Supercross in 2015. He raced 250SX East for the Rockstar KTM team in 2014 and scored a fifth in Toronto.

Notes: Weimer missed the final six rounds of supercross due to injury.

Notes: Gaines missed time with a wrist injury in his rookie season.

Notes: Archer is expected to race the 450 Class once the series heads east.

Notes: Noren only rode a few rounds of supercross before pulling out to begin testing for Lucas Oil Pro Motocross.

#24 Brett Metcalfe – Metcalfe will once again spend his summer in Canada, having signed with the Rockstar Energy OTSFF Yamaha team. At this time, it’s unknown if Metcalfe will race Monster Energy Supercross in 2016. He raced the first six rounds in 2015.

#60 Matt Lemoine – Lemoine raced for JAB Motorsports Kawasaki in 2015, but halfway through the Nationals the team went off the road due to lack of funding. We’ve heard that Lemoine may retire, but nothing official has been announced.

#159 Darryn Durham – The former Monster Energy/Pro Circuit Kawasaki and TLD KTM rider will be putting his own deal together and racing the 250SX East Region. Durham was injured at the West Region opener last year and missed the remainder of the season.

For more on privateers, check out the silly season update we put together last week.