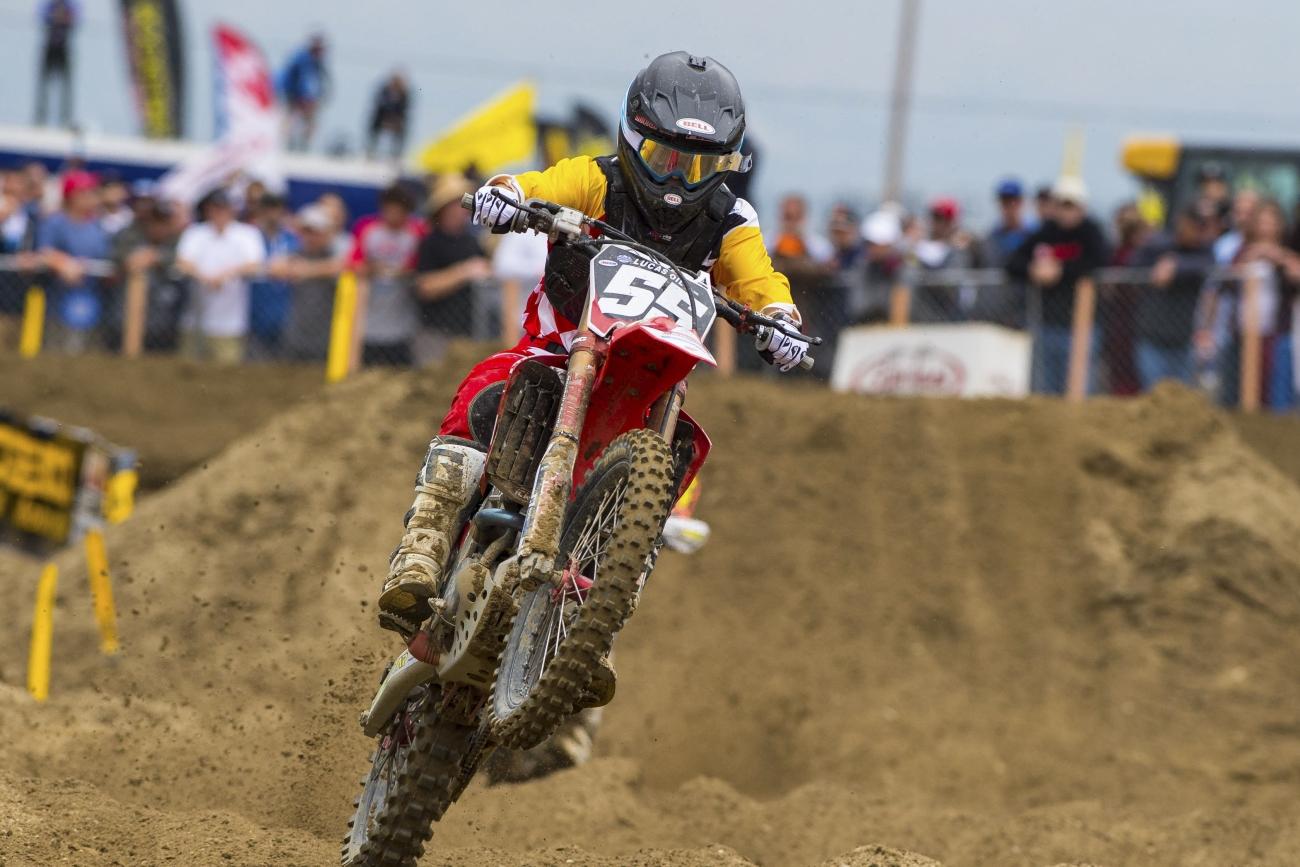 No rider ever wants to hear that his team is going to fold. Unfortunately, it’s the grim reality some have to face. Uncertainty comes with the job of being a professional athlete in any sport. It’s a tough predicament, where riders don’t know whether to flee, or stick it out.

We had heard rumors that the Crossland team wouldn’t be returning to the paddock this season, but apparently those were just rumors. The team is back, and Kyle Peters is still on it. We caught up with the North Carolina native as he was in between motos on Tuesday afternoon at Club MX to get the scoop on what exactly has been going on with his program.

Racer X: It’s been a pretty eventful offseason for you. We’ve heard rumors that the Crossland team wouldn’t be racing in 2016, but you just signed a new deal with them. What’s been going on?
Kyle Peters: Yeah, the offseason has been a bit crazy. After the season I just continued to work hard. Chris Crossland [team owner] and I did a lot of talking and we finally got the deal done. I’m stoked about that. We’re doing West Coast and then a few outdoor races. If everything goes well we will do all of the outdoors. Everything is coming together now. Matt Jory over at Proven is doing our motors again this year, which is awesome. That means we will have really great motors. We also have Showa and Marshall Plumb doing our suspension again. We’re going to have some of the best bikes out there. It’s going to be Chase Marquier and I on the team. It’s going to be a good year for both of us. I feel the best that I ever have. I’ve been healthy all year and I’m feeling great.

It sounds like everything is under control in the team department. How long have you known that you would be returning to Crossland?
I’ve known for about a month now. Yeah, there was talk of Chris not wanting to go racing. I’m not 100 percent sure on what all went on. I heard the talk about the team not happening and I just stayed in touch with Chris. He always seemed like he wanted to go racing. I told him that I was loyal and he said that we would make it happen this year. Now everyone is putting in a lot of hard work and it’s going to pay off.

Is Guy Cooper still going to manage the team?
No, Guy won’t be with the team this year. It’s going to be a really tight knit group. It’ll be Chase, myself, our two mechanics, and I think Chris is going to manage the team. I’m not totally sure on what the sponsors are going to be for our team. However, we will still have the semi and pit presence that we had last year. The team is just going to be a bit smaller, which is better for me actually. Chase and I will get a lot more attention, be able to test more, and really get to focus on us.

You’ve proven in the past that you can make the podium in a very low-pressure environment.
I’m definitely expecting more out of myself this year than last year. I like flying under the radar. We’re going to surprise some people and I can’t wait to get to Anaheim 1. I like to prove people wrong, just like I did in 2013.

As far as you can see, what are the differences in yourself from 2015 to 2016?
Last year I had my deal finished really late. I think I ended up signing with them two weeks before Dallas last year. It was a little hectic in the beginning, but supercross went pretty well for me. I had a few big practice crashes at the races, which affected most of my results. Last year was a really solid building year for me and I was healthy throughout the year. I hadn’t had a year like that before. I think that is what helped me out more than anything. I’ve been putting in the work with Phil Nicoletti and all of the guys here at Club MX. This is the most confident I’ve ever felt. I think the 2016 season is going to be awesome.

We’re only a few weeks out from Anaheim 1 and this will be the first time that you race the West Coast right?
Yeah, I’ve done the East Coast my entire career, so this will be a little new to me. I’m up for the experience. I’m looking forward to it actually. The team is just doing West Coast only. I wasn’t opposed to it at all. I feel like I know what to expect, but once I get there we’ll see how the tracks form up.

Dirt is dirt, but how difficult is it going to be to transition from a supercross track at Club MX to a track in California?
I go out to California almost every year to ride and train. I feel like I’ll get used to it very fast and it won’t be an issue at all. Anaheim 1 will be a little different than having the opener at Dallas. The openers usually pump me up more than they actually get to me.

What are your plans for the rest of the month?
This Friday my grandpa, Phil Nicoletti, Cade Clason, and myself are road tripping out to California. We’ll get set up and do a little more testing. We have a long drive ahead of us! We’ll all train together and go on mountain bike rides and stuff like that. I don’t really know a whole lot of what is going on. I’m just focused on what I have to do to get the job done this year and everything else will fall into place. It’s a bit crazy right now! As long as I have a bike under me it’ll be a solid year and that’s all I’m worried about.

What else didn’t we cover about 2016 and what you have going on in your life right now?
I mean everything is kind of basic. We’ll ride, train, cycle, and hangout. Everyday consists of getting the work done. It’s been a tough off-season so far training-wise. I’ve been training with Nicoletti and Clason and man, they’ve been kicking my butt on the bicycle rides. It’s good for me and I know what it takes now to be one of the top guys. I thought I was working and training hard before, but now it’s a whole different ball game. It’s going to be an awesome year for sure.