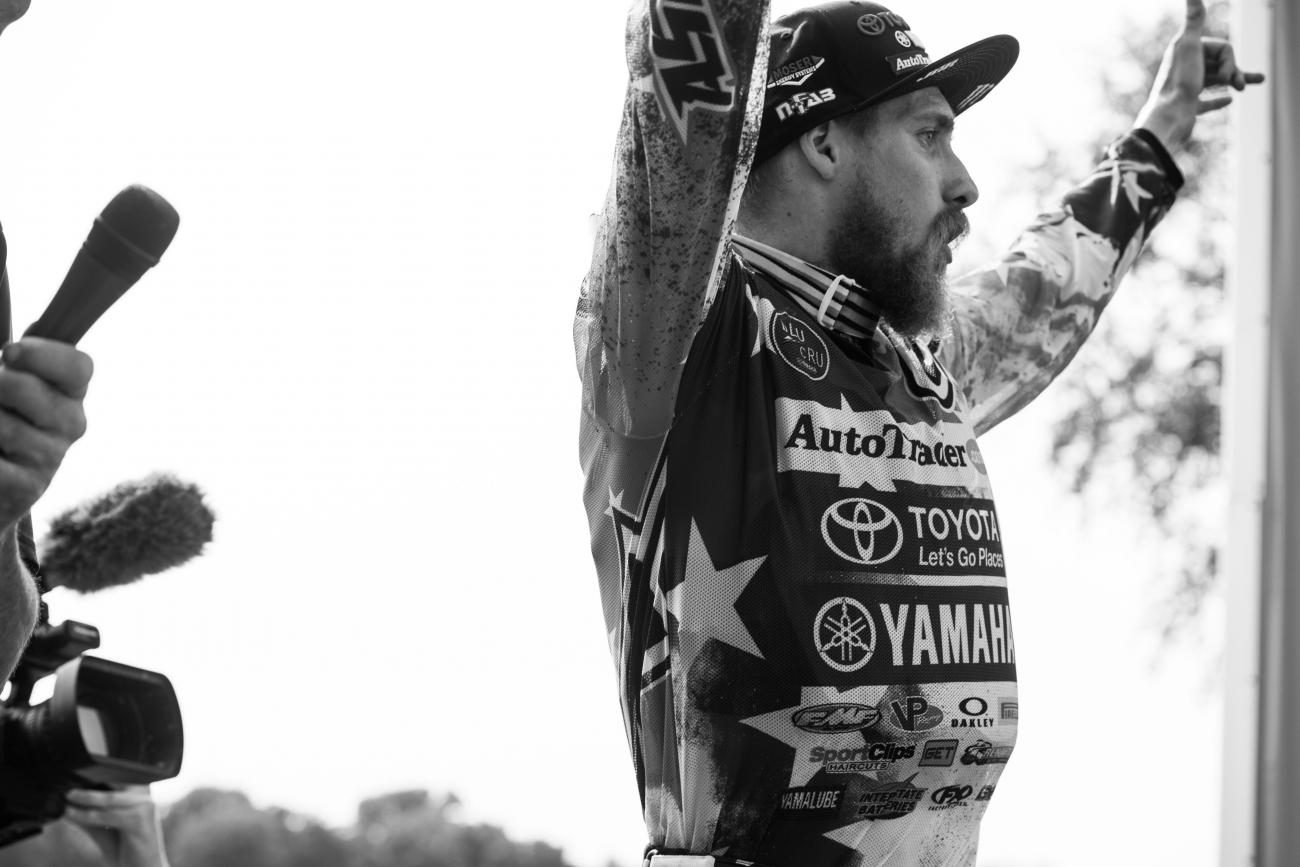 Attention has shifted to bench racing for the 2016 season, and nothing is larger than the chasm between the riders we know will win races, and the riders who we think may win races. That is the red line of happiness and performance for bike, rider, brand and sponsor.

Right now Justin Barcia is jammed into that void. Elite status seems a given for someone with his talent, but evidence goes both ways. He’s basically been exactly 50/50 in his career—half the time a guy who battles for wins; half the time not quite there. There are brilliant highs: like two relatively dominant 250SX East Championship runs, and immediate success on a 450 (a Monster Cup win in 2012 and two wins as a rookie in 2013).

The ability and resume are there.

But, he hasn’t actually won a Monster Energy Supercross race in two years. In fact, halfway through last year, there was a real question floating through the pits about Barcia being able to beat his Autotrader.com/Toyota/JGR Yamaha teammate Weston Peick. Peick’s become a great rider, but hasn’t won a race yet. Barcia wants to be compared to the Ryan Dungey’s of the world.

Then came the summer resurgence, with two national wins (and nearly a third at Washougal), and a heroic ride at the Motocross of Nations where he took Team USA’s first moto since 2011, and nearly salvaged the team win with a final moto charge. Barcia didn’t win the Monster Energy Cup like he did in 2012, but he looked much more competitive there than he did in his JGR debut last year.

Things are clearly trending up. Now the question is, just how far?

Maybe the reason Barcia is so hard to figure out is because he actually lives in the middle of another void. There’s the rider you think Barcia is, and the rider he actually is. Barcia has that rep of a revver and scrubber, an all-out charger, a win or crash guy. That’s what it seems like when you watch him ride, all hair-on-fire wide open. But a closer look shows he’s actually quite consistent. He might ride on the edge and ruffle feathers, but he makes big saves and avoids the big crash. His crash reel on YouTube is merely filled with front-end washouts and tip overs. Barcia’s bad races aren’t win-or-crash wad ups, they’re just ones where he starts sixth and finishes fifth.

Barcia’s 2014 sophomore season with Honda seemed like a disappointment, only because he had championship goals and didn’t even win a race. He was consistent, though, finishing between fourth and seventh 9 times in 17 races. He only finished outside the top ten twice (an 11th and 12th). His early 2015 finishes were 6-11-4-6-8, all somewhere in that void between good and great.

For someone so full of flash, Barcia actually performs best as a slow burn. He’s the rare rider who gets faster between practice and the race, who actually thrives on competition instead of getting lost in nerves and pressure. That’s a great quality in general, but sometimes he wants it so bad that he actually goes too hard, and butts up against that old “ride slower to go faster” argument.

We’ve seen a lot of rookies come in with spectacular results, but along the way there will be growing pains. At some point, the Honda started to suffer, and Barcia’s timing was terrible for the fix. He and Chad Reed eventually left, while Trey Canard and Eli Tomac remained, KYB suspension and HRC help came to the table, and things turned around. Barcia just missed all of that, because he hurt his ankle right before the new stuff came.

Last year was his first since his 65cc days where he wasn’t on a Honda. For some, bike switches come easy, but it did not go that way for Justin, who is still learning to become an ace at testing and setup. He and then-coach Johnny O’Mara tried to tame his style by asking the team to tame the engine on his YZ450F. Mellower power might have been better for lap times, but it didn’t help on starts. And starts are where Barcia makes his money.

You can argue that Barcia is the best starter of his generation. But the starts weren’t there in 2014, and weren’t there again in 2015. His results suffered. By the early rounds of Lucas Oil Pro Motocross, he started working with different engine packages and the starts came roaring back. Vintage Barcia took eleven total holeshots in the Nationals. How did he deliver those two supercross wins in 2013? By holeshotting. We have yet seen a race where Barcia starts in the back and just rips through the best in the world to win, but the more often he starts up front, the less important that really is. When Barcia gets starts, his lets his tenacity do the rest—he’ll fight you with everything he’s got.

When Barcia won early in his 450 career, it set up expectations of more immediate success. He now seems better off having ridden through some bad days, and slowly building back into a winner. Barcia took his star turn with Team USA, and has been hammering down on training and testing without a break. Confidence wise, he’s back.

A lot of high-profile rider/team switches quickly unravel if the early results aren’t there, but this relationship seemed programmed for the long haul. And Barcia even recently bought a house near the JGR headquarters in North Carolina. Even before the wins came, the bond between rider and team strengthened, and now JGR has him signed through 2018. Certainly things are solid, the flash and sizzle now set to just apply high heat for a long time.

But how many wins will he cook up?