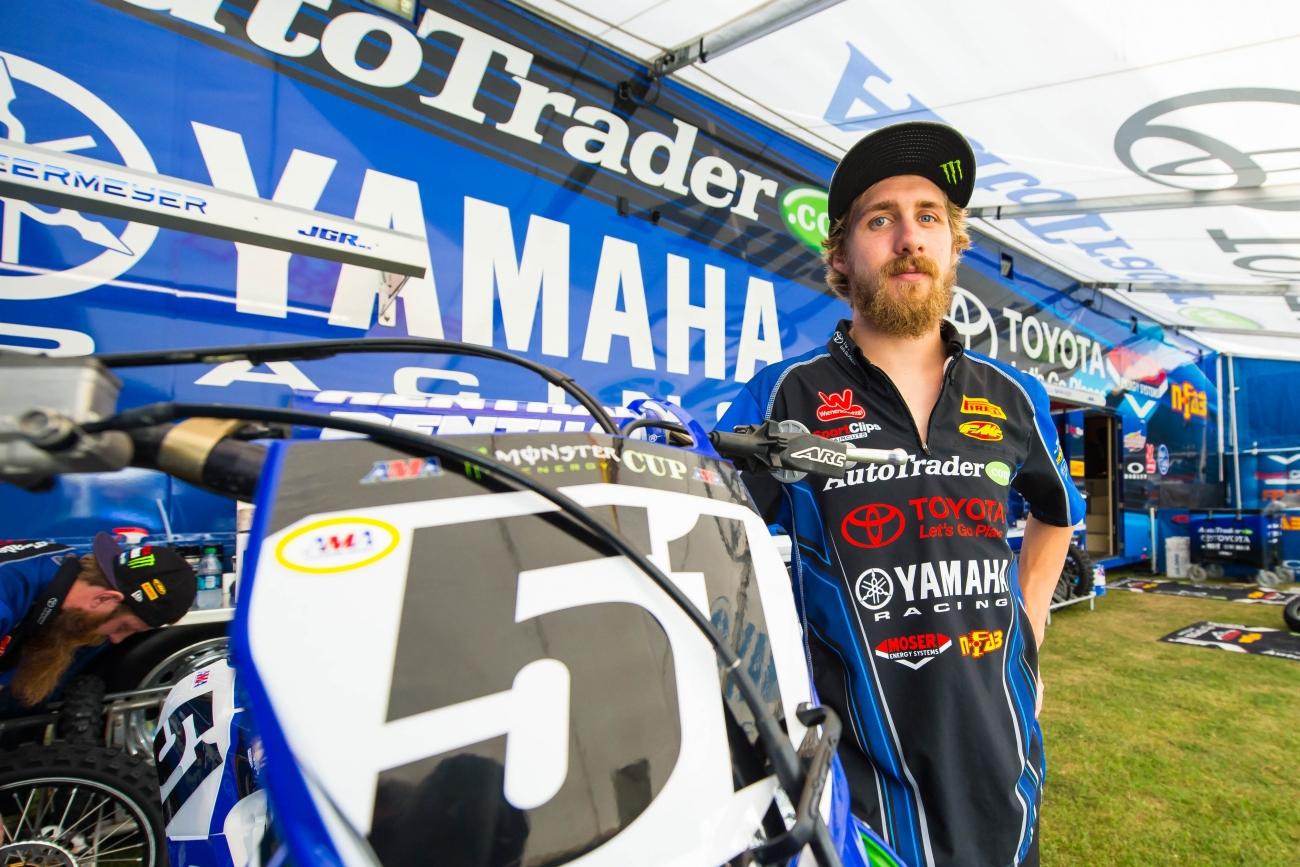 3 on 3 Questions for the Future

Jason Thomas: I really had to think about this one quite a bit. An argument could be made for all three of these guys, as they have all been well inside the top five of series points in recent years. Andrew is the senior member of the team, going on his fourth season. He was ninth last season, missing the last round with a broken kneecap, but a strong sixth in 2014. He is consistent and rock solid over seventeen rounds, exactly what it takes for a good overall result.

Justin Brayton had a rough and tumble 2015 season. He came in a bit injured and then compounded that with a big get-off early in the season, sending him to the couch for multiple weeks. He could never really build any momentum, and fought to catch everyone's pace as he continued to improve each week. Next year will be a chance to redo that down year and show the incredible pace he had in 2014. He ended the 2014 season seventh in points but nearly won Phoenix and was on the lead pace many other times that season. If that Justin Brayton shows up in Anaheim, he will be tough to contend with.

The final contender here is the newly signed Davi Millsaps. Davi is coming off of multiple injuries the past year or two, and we really haven't seen much in the way of consistent racing since his impressive 2013 campaign. He raced half the season with Monster Energy Kawasaki in 2015, but never really found his 2013 form due to a pre-season illness and then a big crash just before the new year. He is the wild card. I believe the key for Davi is two-fold. First, he needs to be happy with his surroundings and bike setup. He has to believe he is on the best equipment for him personally, and that it gives him the best chance to win. Second, he needs to have an uneventful but effective off-season. The work that goes in during this time is pivotal for bringing out that full potential once January arrives. To race the best, Davi needs to be at his best.

So, I’m going to go with what history has taught me. Andrew Short's consistency is too big of a factor to overlook. His great starts and ability to avoid trouble bears well over seventeen races. If I have to choose, I will take the #29 to have the most points come May 7.

Jimmy Albertson: Wow, I've never even thought about that question, and it's a tough one. Shorty and Brayton have always been such consistent SX riders, but both got hurt last season. Davi had an awful year in 2015, but in 2012 and 2013 he was second in points. I have to say Millsaps simply because I think he's the fastest of the three.

Jason Weigandt: Yeah, this is a tough one because Short and Brayton seem evenly matched, and Millsaps is such a wild card. You can make a good argument for any of these three guys. I'm just gonna swing for the fences here and say Millsaps; his back is against the wall for the millionth time and I think he'll respond well. You know that old saying: "We can work with speed."

2. Does Eli Tomac take a while to get going, or will he be ready to win on January 9?

Thomas: I think Eli will be very good in January, but not on the same level that we saw in May when Lucas Oil Pro Motocross kicked off. Eli underwent double shoulder reconstruction, sidelining him for over five months. That is a long stretch to be away from racing, and with just over two months to prepare, it is simply unfair to expect that same level in such little time. Not only is he trying to regain his strength and form, but he is working with a brand new motorcycle, team, and technicians. There will be a learning curve there, but it’s surely a short one. I think he will improve as the season continues; every week is a chance to build himself back up to the level he knows he can attain. So, do I think he will be at his best on January 9? No, but I do think he will be good enough to contend, and will only improve from there. The supercross season is a four-month-plus marathon. The fastest rider at Anaheim doesn't always have the last laugh.

Albertson: I don't think Eli will win straight off the bat—not because of the Kawasaki, but because he is coming back from injury. People will probably question his decision, but he will eventually start to win. After that, people will praise the bike and the decision!

Weigandt: I'm not worried about Tomac one bit. I think certain dudes have "it" and can make a bike change and injury return as if nothing happened. Talent and confidence often outweigh all the other junk we talk about, and that's why we've seen dudes come back from long lay-offs to suddenly kill it at Anaheim 1 (visions of Millsaps/Trey Canard in 2013 are dancing in my head). I know Tomac's timing is worse than usual since he has an exceptionally late start, but guys that believe they belong at the front usually get there. They have to, because I don't see much history of a contender starting the year slowly and then catching fire as he races his way into shape. It just doesn't happen that way. I think Eli will be right in the thick of it from the get go. There might be a few small hitches along the way, but in general he'll be good.

3. There's great parity right now between brands, as each has at least one championship contender. With those lineups, which manufacturer has placed themselves in the best spot for the next 3-5 years?

Thomas: I think this has to be KTM, but for more reasons than the question lists. As shown, every manufacturer has a legitimate chance at winning championships right now. The advantage that KTM has is depth…. Well, that and the fact that it also owns the Husky brand. KTM not only has multi-time and reigning champ Ryan Dungey under its tent, but it also just added last year's 250SX East Region Champion, Marvin Musquin, to their 450 arsenal and have mega-talented Dean Wilson finally healthy. Backing them up is the line-up from the first question, BTOsports.com KTM. That team has three riders that are all capable of putting their bike inside the top five on any given night, adding to that depth. Combining the #1 plate from last year's 450 championships, the #1 plate from the 250 East championship, and at least four other riders who will all see top-five action, it's tough to not pick the powerhouse from Austria.

Albertson: By first glance you have to say Suzuki, right? Roczen is already hot and is expected to mix it up for titles for a long time, and this year they get Stewart back, too. But think about this: Yamaha has Jeremy Martin and Cooper Webb moving up next season, but where will they put them? Dungey is likely locked down with KTM for the rest of his career. On top of that, Marvin could still be a standout on the big bike with time.

Every team has talent somewhere along the line. If Yamaha can figure out how to keep Jeremy and Cooper on blue next season, to add alongside Justin Barcia, who will remain with JGR through 2018 (though JGR's deal with Yamaha ends in 2016), that would be a stacked team for the future. KTM will always have the Dunge, though, and he will always be right there winning races, if not championships, every season. So right now I'm looking at Yamaha and KTM.

Weigandt: It's pretty crazy that Suzuki has both Ken Roczen and James Stewart, whom you could argue are the two most talented and popular riders out there. But if this question is about the years ahead, it's hard to predict where that tandem goes. Stewart is obviously getting older, and Roczen could leave after his RCH deal runs out at the end of the season. They could both kill it, Roczen could re-sign, and Stewart could prove to have 2-3 years left as a contender. Or, Stewart's best days could be behind him and Roczen could leave. Hard to buy Suzuki stock when it's so hard to predict where it will go.

I vote Yamaha. Barcia is at least with JGR long term (JGR's Yamaha deal ends in 2016, so they could move to another brand and bring Barcia with them, but with the rumored return of factory Yamaha now running aground, I think it's likely JGR re-signs as Yamaha's main 450 effort for the future). Cooper Webb is, hands down, the hottest property in the sport, especially since he's already shown what he can do on a 450. I would be shocked if Webb doesn't stay with Yamaha one way or another (the only wild card I see is Honda coming in with a massive offer for him in 2017, but I'm literally just making that up). If Yamaha has Webb and Barcia on lock, that's impressive, and you also have J-Mart, Aaron Plessinger, and others in the mix. And Yamaha was struggling just a few years ago—things can change quickly!