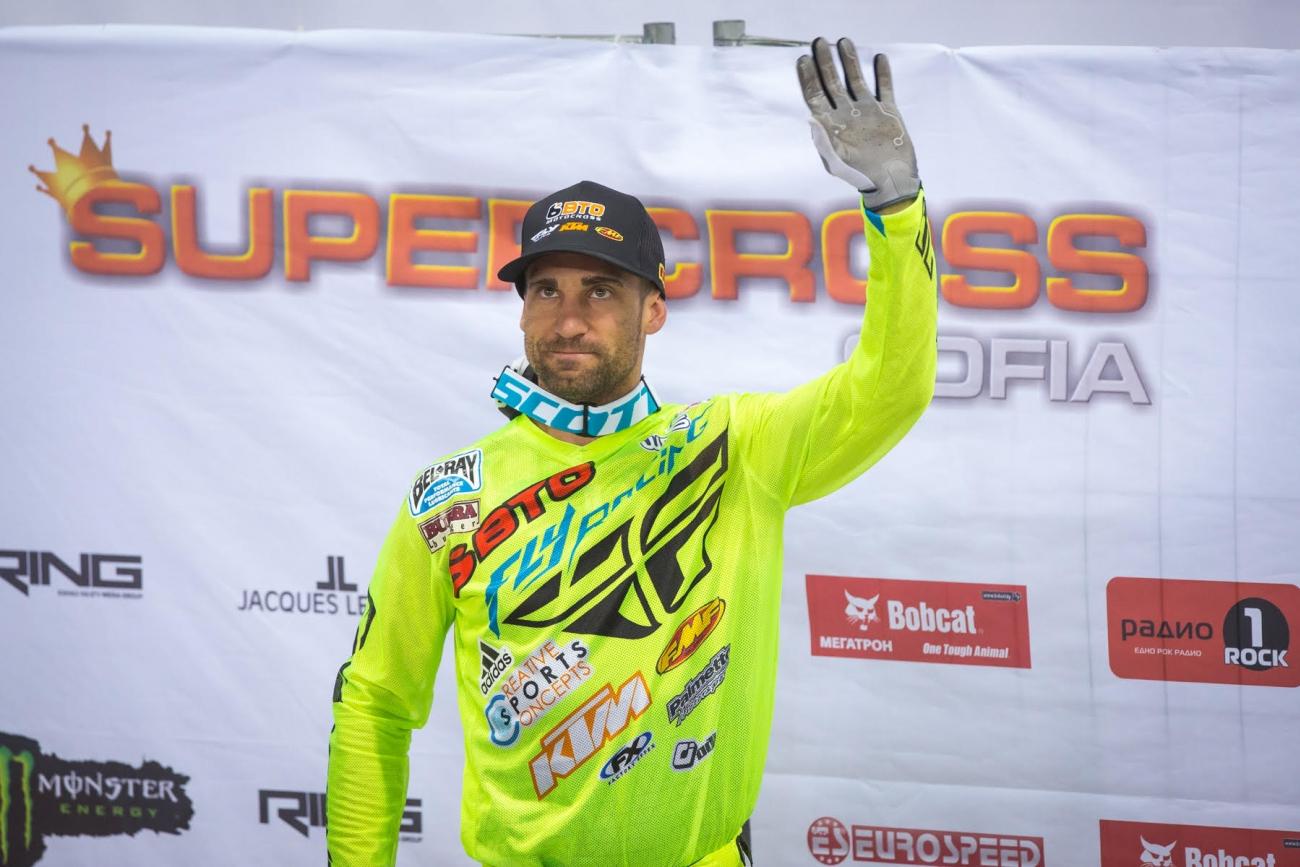 The second night in Sofia, the capital of Bulgaria, has wrapped up and although this is the event’s first year, it had a familiar ring to it, with BTOSports.com KTM’s Justin Brayton showing off his European SX prowess to win the King of Sofia title. After a third place finish last night, and riders awarded one point for winning head-to-head bracket racing, Brayton knew he had to sweep the second night if he had any chance of winning.

In the bracket racing, most expected to see Brayton square off against night one winner, Weston Peick, but GEICO Honda’s Malcolm Stewart upset Peick. Brayton held off Stewart after an aggressive by Malcolm left him on the ground. Brayton’s two wins (one last night) in bracket racing earned him two points. Also, he was also the fastest qualifier on this day and won the hot lap competition. Those extra points helped Brayton capture the King of Sofia title.

In the main event it was GEICO Honda’s Malcolm Stewart, on a 250F, that somehow pulled the start and drove it hard into the berm in the first turn. His aggressiveness caused him to hesitate a bit and Brayton and Peick both snuck by and the race was on. Peick and Brayton were both charging hard and pulling away from Stewart pretty fast. Peick followed Brayton very closely as they ripped through the field. One mistake by Brayton and Peick, if he didn’t hit Justin, would have gotten by.

Brayton switched his line over the wall jump and in the whoops to the right hand side and that seemed to be enough to slowly inch away from Peick with some help from lappers. At one point Brayton made contact with the back of a lapper and just about went down.

While Peick put on the chase and Stewart held strong in third it was Phil Nicoletti recovering from a bad start to end up fourth with Josh Hansen fifth. Brain Hsu followed in sixth with Mike Brown, who had to ride the LCQ to get into the main, in seventh.

The two front-runners lapped up to fifth place on a track that featured around 23-second lap times. Brayton went 3-1 ahead of Peick (1-2) and Stewart (2-3) over the two nights, but as we mentioned earlier, Brayton’s wins in the bracket races pushed him ahead.

“I had a couple of opportunities in the first night to run it in on Peick but we’re all buddies so I didn’t want to do it. Then I crashed. I thought I would need to battle Peick today and win the brackets to get the King title,” said Brayton after the race

“I got the job done here at the first one and got it done. The track was tight and it was total arenacross–style, which is where I come from.”

“Sofia was good, the first race here the track was one of the better ones although it was small. I won the first night, ended up second tonight and I kind of forgot that the bracket points counted. JB got them when it he needed to,” said Peick after the race “There were some dangerous riders out there, cross jumping and swerving. I had heat on Brayton the whole time, a lapper almost killed us both. We were pushing it so hard that one of us would have gone down”