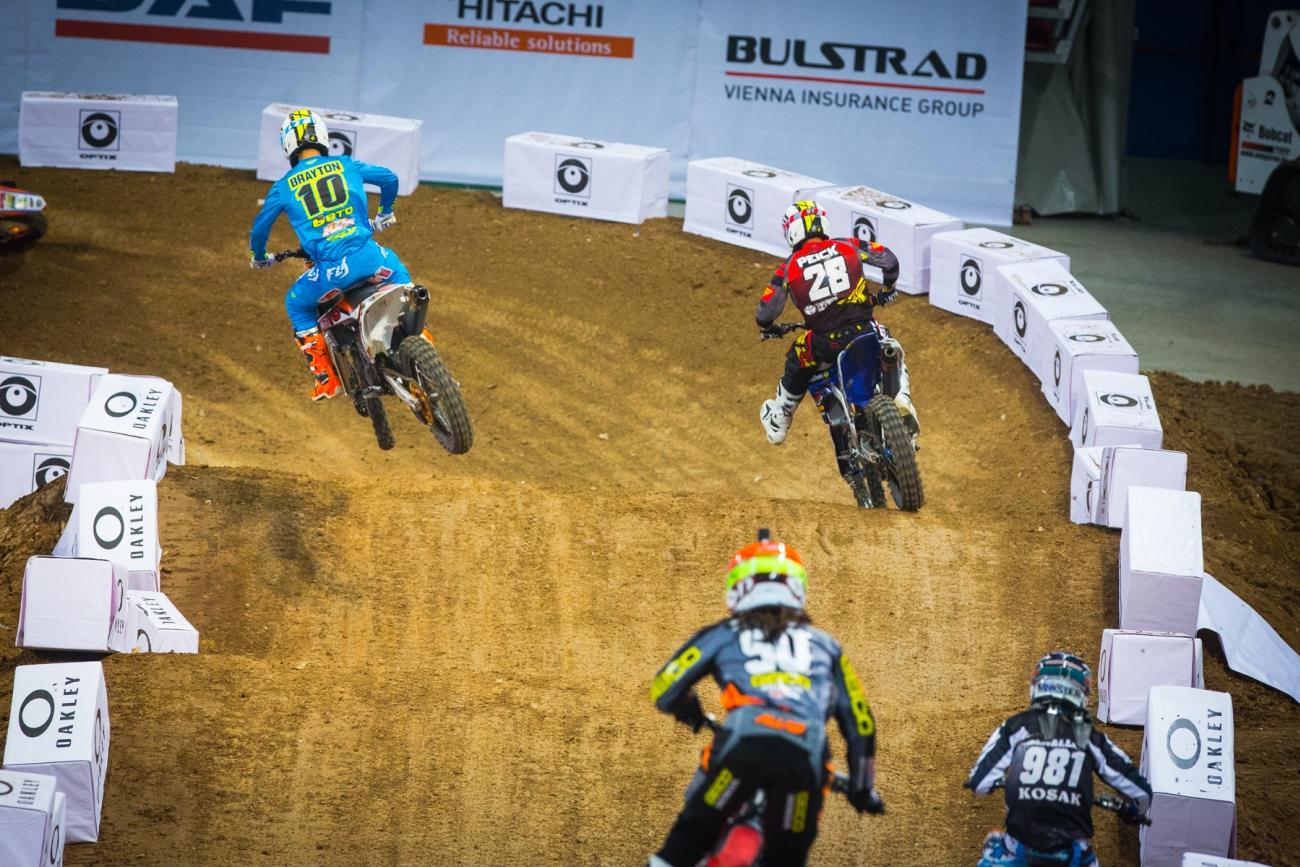 Sofia, the capital city of Bulgaria, was home to the first of four stops in the off-season of supercross racing—or as these riders like to call it, the cashing in season. Sofia, Lille in France, Genoa, Italy, and then Geneva, Switzerland, are all lined up between now and January. A rider like Malcolm Stewart, who will race all four, can probably look at making 150K or more. It’s easy racing, lots of hanging out, some interesting experiences and a fun time for all.

Night one is in the books in Sofia and JGR Yamaha’s Weston Peick took the main event win despite some mid-race pressure from BTOSports.com KTM’s Justin Brayton.

The main event started with a holeshot from JGR’s Phil Nicoletti and he led for a couple of laps before coming up short on a triple in the rhythm section and hurting his ankle. That was it for Nicoletti, as he pulled off and called it a night. Not all was lost for Filthy Phil though, as he got a fake check and a nice watch for the holeshot.

A clear distinction between the skills of the top riders and the back-markers meant that Peick ran into lappers early on in the main, which allowed Brayton to close up a bit. Brayton made a couple of runs at the lead but couldn’t close the deal and later hit a Tuff Block after the finish and slid out on the hard packed dirt. This allowed Peick to ease up a bit and ride away with the win. GEICO Honda’s Malcolm Stewart took the runner-up spot on his 250F, while Brayton recovered for third.

Fourth was Josh Hansen on a Kawasaki, followed by the promising German youngster Brian Hsu (pronounced Sue) and then Husqvarna’s Mike Brown, whose suspension and bars didn’t make the trip over. Mike was running a bone stock FCR 450. That problem didn’t stop him from grabbing the holeshot in his heat race with no starting device although Nicoletti claimed Brown could look over the inside start divider and see the man hit the lever. Brown, ever the vet, neither confirmed nor denied that this was true.

There was also a fastest lap competition won by Peick. Brayton squared up with Nicoletti in the finals of the bracket race and took the win. The winners of these events are awarded one point towards the King of Sofia title to the rider that wins the most different events.

This was night one, there’s another day of racing tomorrow afternoon and we’ll see who comes home with the prestigious title. No matter who it is, the small but enthusiastic crowd will be into it.