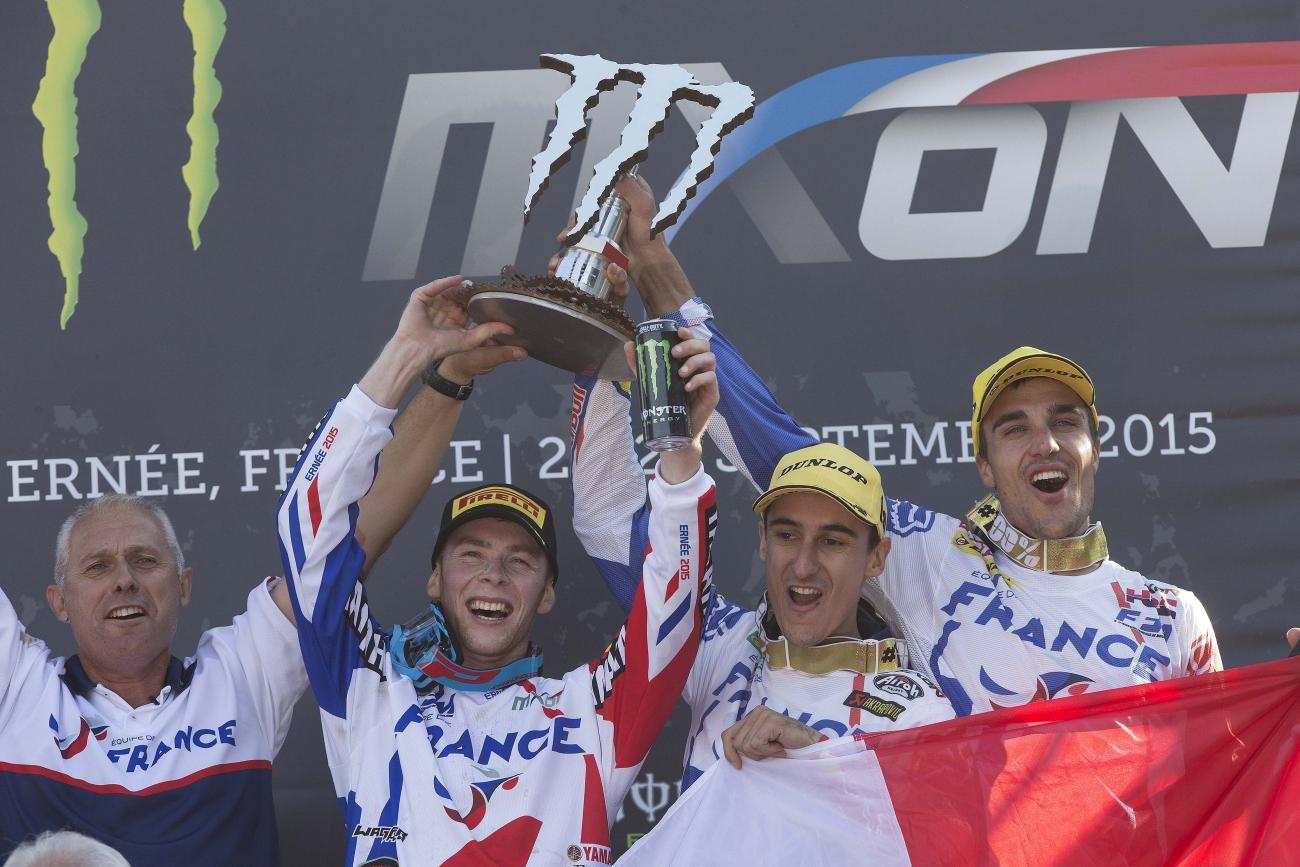 Rapid Reaxtion Sunday at the Motocross of Nations

The 69th annual Motocross of Nations is over and France has won for the second straight year, this time in dramatic fashion over the Untied States. Let’s take a closer look at the race and talk about some things that went on behind the scenes, as well as on the track.

The race boiled down to the starts and when the US needed them in the third moto, they weren’t there. Starts were stong for Team USA in the first two motos, as Justin Barcia and Cooper Webb both holeshot. But in the third and final moto, it was Romain Febvre in first, Gautier Paulin around fifth and Barcia and Webb around or outside the top ten. And that was it. The US entered the third moto with a two point lead over France (or, it was actually tied when you factor in a throwaway score) and the Frenchmen got good starts and Barcia and Webb were way back. Barcia and Webb put in fantastic rides to make it close, but the race was effectively decided on the start.

Like last weekend at the MXGP of USA at Glen Helen, newly crowned MXGP champion Romian Febvre was the class of the field by winning both of his motos overall (Febvre rode Open for France.) It would’ve been interesting to see what Barcia could’ve done with him with a start, but they only squared off in the last moto, and it never materialized as Febvre got away early. He was only kept in check by New Zealand’s Ben Townley. More on his epic day below.

The start, unlike a lot of GP tracks, was pretty fair wherever you started. Generally speaking, the US likes to give the 250 rider the inside gate and every 450 rider the number one starting position in one of their motos. But because Barcia has been a great starter all year he volunteered to take the outside gate for all his motos.

As far as the those starts for Barcia and Webb in the final moto, both riders said they didn’t get the jump they needed. Team USA manager Roger DeCoster concurred and also cited wheelspin.

Gautier Paulin said the original plan was to ride the Monster Energy Cup along with Lille-Bercy Supercross, but after the race the Frenchman mentioned that his knee is pretty bad and that he’s going to have to get it looked at and thinks it will require surgery. Stay tuned on this development.

After the race, Team USA Manager DeCoster was obviously not pumped on taking the loss, but he was happier than I’ve seen him after the last few defeats. “The French were good, we knew that ahead of time and with them riding this track two weeks ago, they knew their bike set-up,” he said post-race. “Starting from the first practice on, they had everything dialed in. Marvin (Musquin) rode a great race and so did (Romain) Febvre although I suppose he was expected to.

“I’m happy, not for finishing second, but for the ways my guys rode. I don’t think people thought they would do as well as they did. Barcia [with a moto win and great moto three comeback for third] rode great.”

Ben Townley was a real story all day long and admitted after the race that this result (6-2 for third overall in MX1) made him think about returning to racing, but then said he’s going to be sore tomorrow and he’ll remember why he doesn’t race full-time. Townley did say that as long as New Zealand wants him to race at this event, he will.

After Max Anstie’s horrific crash in qualifying yesterday, Great Britain was left without an MX2 rider, so they had no chance of doing well. But Shaun Simpson and Dean Wilson rode hard and placed eighteenth. Wilson was on the injured Antonio Cairoli’s bike with his suspension and couldn’t adapt to it. He remarked that it was way faster than his bike and perhaps had some different transmission ratios as well.

Marvin Musquin rode terrific in the first moto until he fell. He caught and passed Barcia, which was pretty awesome for an MX2 rider. His best lap of the first moto was almost two seconds faster than Barcia’s, who was second! Afterwards, Marvin said that although he’s won championships both in Europe and in the United States, this was a career highlight for him.

Belgium got third and it’s the fourth straight year they’ve made the podium at this race, which is pretty remarkable for a country the size of Maine. The Belgians came into the race banged up with Ken de Dycker replacing the injured Kevin Strijbos. De Dycker had only been on a bike for three weeks after missing most of the year with injury. The team’s MX2 rider, Julien Lieber, hurt himself last week at Glen Helen and was questionable for the weekend. He did line up, but hurt himself further during the course of the weekend and had to tough it out for scores of 12-36.

Running the #22 on a Honda, Russian Evgeny Bobryshev was strong in both motos. His teammates didn’t have the best day but Bobby was second in MX1 to Barcia. Before the race he told me that he plans on coming to SoCal for the months of December and January to do some training for the GPs.

Estonia tied a career best with a fourth overall as Tanel Leok lined up and produced good results for what we think is the fifty-second year in a row. Harri Kullas, a Finland native who has duel citizenship (he raced last year for Estonia for the first time and there are some angry Finnish MX fans, in case you’re wondering), also put in solid results, going 12-15 on the day.

American Michael Leib lined up for Puerto Rico and although he had a rough time adjusting to the Kawasaki, his teammates were worse off and didn’t finish the qualifying races on Saturday. Unfortunately for Leib, the team scored so poorly that they didn’t make the B Final on Sunday morning so his experience at the Motocross of Nations was pretty short.

Speaking of the B Final, Slovenia’s Tim Gajser, the 2015 MX2 World Champion, won it with ease, but his teammates struggled leaving the overall to Japan. That advanced Japan to the final, where they finished twentieth.